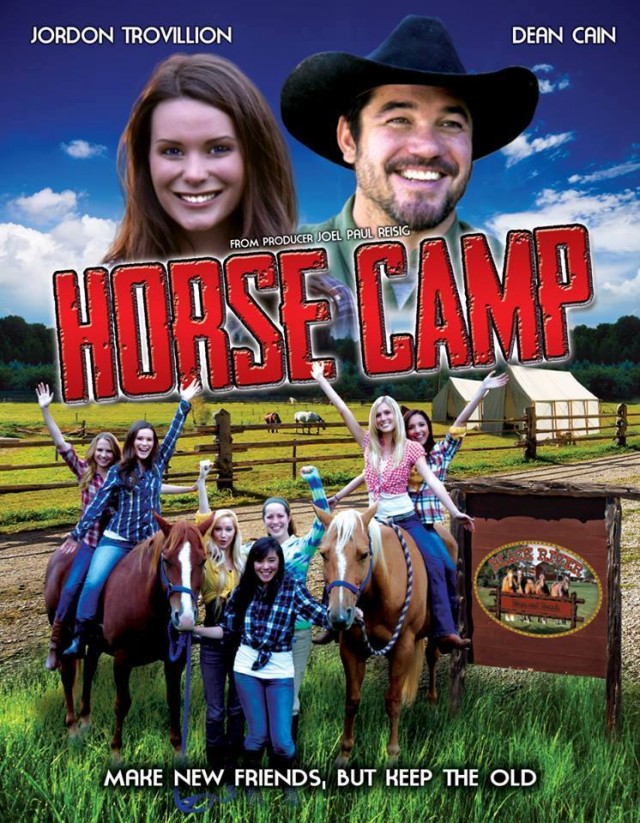 Will HN Movie Critic Amanda ever dethrone ‘The Derby Stallion’ as the “Best Worst Horse Movie?”

This week’s contender for the title is Horse Camp starring Dean Cain.

As it turns out, 1993 Superman is scared for his shy, introverted daughter. She’s also 17 years old and has never been on a horse. This shall not stand. So, she gets shipped off to Black River Horse Camp.  Before she arrives, Dad imparts 17 years worth of equestrian wisdom in 17 seconds. “Heels down, check your girth, grab the saddle horn!”

Unfortunately, the camp’s mean girls immediately ostracize our protagonist Kathy. Thank goodness for an instant BFF when you need one.

BFF gives us the down low on camp life.  Apparently, there is some kind of horse show/princess contest that features the “Best Rider of Camp” at the end of the summer.

Next, we get some riding sequences where our girl proves to be a “natural.” There is also a troubled horse that nobody else can touch. Isn’t there always?

We bond with Team Awesome at nights and watch montages of camp life during the day. There’s even a kitchen party dance sequence, but there was no Troy… I was a little disappointed.

With Mean Girl turning up the heat, BFF tries to convince Kathy she’s a “regulation hottie.”

After that not at all awkward moment, Kathy gets a full makeover and Team Awesome makes their public debut. Everyone is impressed, so Mean Girl is out and Kathy is in.  Kathy distances herself from the loyal BFF and dethrones Mean Girl.

Will Kathy get her life together? Who will be crowned Camp Princess at the big end of summer competition? You’ll just have to watch and see!

Horse Camp is pretty typical horse movie fodder. There’s an outsider girl, a troubled horse, and a morality lesson about inner beauty. The plot was straightforward and appropriate for all ages. It is rated PG.  The scenes from camp do seem authentic, though the main characters could have used a few more riding lessons before filming started.

But… holy mother of montage, folks. This movie has a lot of them, which wouldn’t be so bad except for the fact that the musical choices were horrible. It was a strange mix of bad pop and banjo folk melodies. The dialogue was also a bit stilted, but that’s hardly unexpected from a made-for-TV flick.

Finally, no High School Musical Troy. Remember that time Troy was in The Derby Stallion? It was tremendous and still the reigning champ of “Best Worst Horse Movie.”

I give Horse Camp 1 Golden Horseshoe.