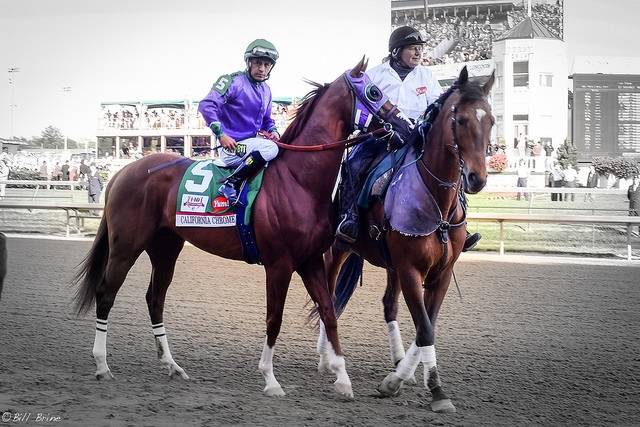 Despite a year of ups and downs, California Chrome came out on top to earn American racing’s top honor last night.

After a tumultuous year that kept racing fans old and new on their toes, California Chrome did what he does best at the Eclipse Awards: He blew the competition out of the water.

The prestigious Horse of the Year award was presented at a black tie event on Saturday, January 17th at Gulf Stream Park. Running against fellow racing superstars Main Sequence and Bayern, California Chrome stole the win with 143 of the 263 votes made by members of the National Thoroughbred Racing Association, Daily Racing Form, and National Turf Writers and Broadcasters. Earlier in the evening, California Chrome was also honored with the 2014 Champion 3-Year-Old Male Eclipse Award.

California Chrome’s underdog story captured the hearts of millions as the chestnut colt thundered to victories at the 2014 Kentucky Derby and Preakness Stakes. His loss to Tonalist in the Belmont Stakes dashed his owner’s Triple Crown dreams, and a controversial loss to Bayern at the Breeder’s Cup Classic caused a social media frenzy among fans worldwide. Chrome’s comeback victory at Del Mar’s Hollywood Derby in November proved that he still had the grit and speed to win — on turf, no less! To honor his excellent performance and popularity among the American public, California Chrome was honored with the fifth annual Secretariat Vox Populi award on January 10. It seems no surprise that the Eclipse Award voters remembered that the year of ups and downs seemed to always come back to the big red colt from a humble background.

Here is the final tally of votes in the Horse of the Year award:

The Blood-Horse summed it up best: “California Chrome… was one of those rare horses who transcended the sport to put his name and the names of his connections on the lips of people all over the country and onto headlines of major newspapers and TV sports reports. Awarded racing’s highest honor, the flashy chestnut carries on as racing’s newest glamour star.”

Thanks for a great ride #Chromies!

Congrats to all the winners. Go Riding!