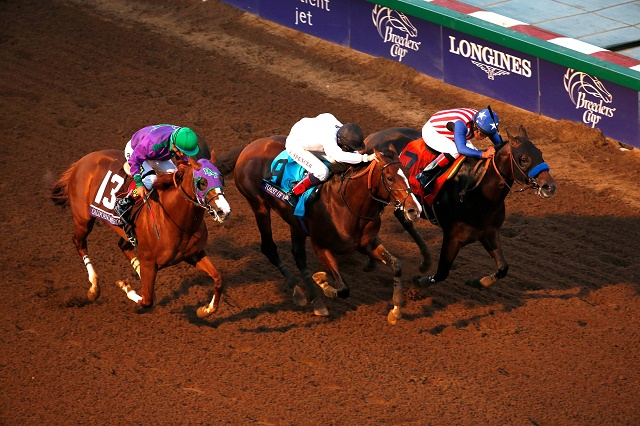 The race started with a fumble and ended with 3-year-old Bob Baffert-trained Bayern stealing the win by a nose — although some argue he should have been disqualified.

The race got off to a troubled start. Bayern, ridden by Martin Garcia, stumbled and pulled a sharp left out of the gate, body-slamming Shared Belief who in turn plowed into Moreno. Bayern seemed unfazed, seizing the lead and hanging on to it all the way to the finish. But those left in his wake felt that the incident altered the outcome of the race, which was expected to be a showdown between Shared Belief and California Chrome. Mike Smith, Shared Belief’s jockey, said it cost his horse the race.

A steward’s inquiry followed but, after several tense moments, it was announced that the result would stand. The final time for the 1 1/4 mile race was 1:59.88. Complete results via BreedersCup.com:

Several heated opinion columns surfaced this morning, including Bill Finley’s “Bayern Should Have Been Disqualified: The Santa Anita Stewarts Made a Bad Call Sunday” on ESPN.com and Bill Dwyre’s “Things Go Bump in Right for Bayern in Breeders’ Cup” in the LA Times.

The Breeders’ Cup Classic win was a first for both trainer Baffert and jockey Garcia.

Photos from the race courtesy of Breeders’ Cup Ltd: