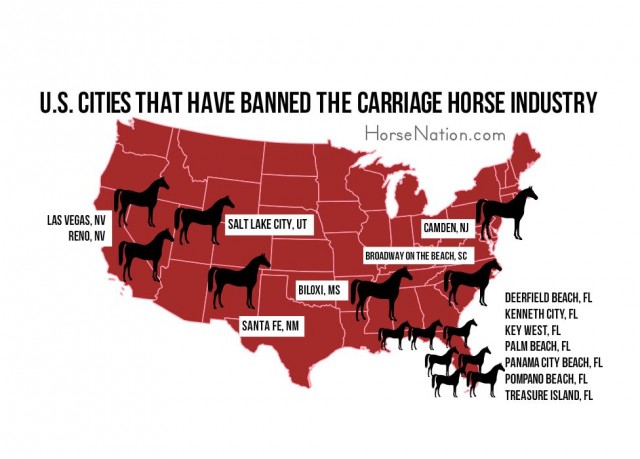 Salt Lake City Council voted last week to become the 14th city in the United States and the 18th in the world to ban horse-drawn carriages in its urban metropolis. Was this a scandal-fueled gimme or a harbinger of things to come?

The Salt Lake City vote has been controversial, heated, and a long time coming in the Utah capital. The local debate first gained huge momentum after the city’s sole carriage company, Carriage for Hire, had a horse go down in the city streets with symptoms of colic in August 2013.

The entire incident was caught on video by a PETA volunteer, and the footage went viral. The horse had to be lifted off the street with a tractor and sling, and carried back to the barn on the west side of downtown Salt Lake City. Despite several days of medical attention, “Jerry” died, and in an act of desperation, the owners tried to conceal the Percheron gelding’s death. When they did admit to his passing, the incident only added fuel to an already hot August fire.

Jerry the Horse, courtesy of Carriage for Hire

Over the next six months, carriage opponents and advocates alike sent in tens of thousands of comments to Salt Lake City Council and attended public meetings. PETA held multiple rallies outside City Hall, and the Humane Society of Utah sided with carriage industry opponents, calling for an end to carriage licenses in city limits.

In February of 2014, Salt Lake City Council narrowly voted not to ban the carriage industry, but rather, to impose several new limits on time, temperature, age, and address other liability issues. Advocates lauded the decision, and business went on as usual for the lone carriage company for awhile. But as the months went on, the negative news coverage, the still unsure future of city ordinances, and a complicated legal battle over the real estate surrounding the downtown barn that house the carriage horses proved too much for Carriage for Hire. The company sold the barn land and shuttered their doors in September of this year. According to owners Blaine and Annette Overson, the horses were not sent to auction, but placed for adoption or rehomed with other small business that used carriage horses on private property.

Last week, Salt Lake City Council decided to vote on the measure again, and this time, without a company and family’s livelihood on the line, it was much easier for the officials to vote for the ban.

According to the Salt Lake Tribune, horse-drawn carriages will continue to be allowed during special events, such as the city’s large annual Days of ’47 Parade.

While the ban affected a seemingly small pool of horses, advocates, and a family business, it’s a timely incident looming in the minds of horsemen nationwide as bans increase, and the New York Carriage Industry in particular waits with bated breath to hear the results of a vote on the same issue. Mayor Bill de Blasio is moving forward with a proposal to New York’s City Council as we speak to ban carriage horses in the Big Apple, and every ban could make the next proposal to ban more likely to pass.

Regardless of the circumstances in New York City or elsewhere, the decision in Salt Lake City is almost certainly final, and residents will soon face their first holiday season downtown, absent of the jingling bells and mighty clip clops of the downtown carriage horses.