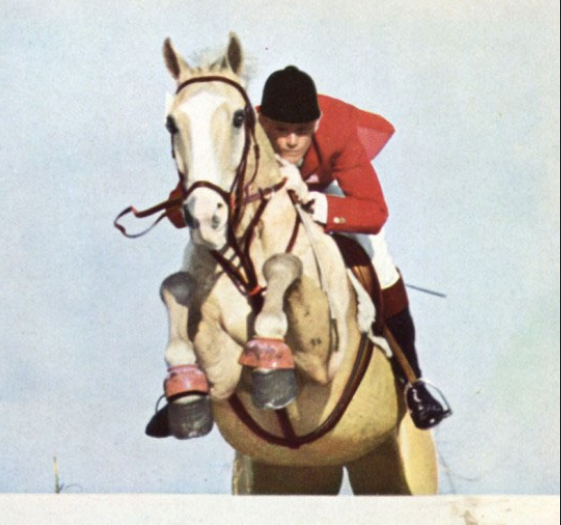 A few months back, Noelle Maxwell introduced us to 1950s international show jumping star Nautical. Today, she shares some interesting research about his early years.

Check out Part I of this series, “Secret History: The Fascinating Story of Nautical, a Palomino Show Jumper with a Golden Career,” here.

He was described as a crowd-pleaser who was fun to watch, but difficult to ride.

According to George Morris, he was one of the hottest, most difficult horses on the U.S. Equestrian Team — but a good horse in speed classes and able to turn on a dime. Bert DeNemethy was quoted as saying that the horse always seemed to have one eye on the crowd, as if to say, “Well, I got them now.” That horse was Nautical, a palomino QH/TB/Army Remount gelding, star of Disney movie The Horse with the Flying Tail, winner of the King George V Gold Cup, and part of the USET from 1955-1960.

A champion show jumper he was (fast forward to around 6:35 to watch his round)…

…but his early life wasn’t quite the clean-cut, ranch-horse-turned-superstar story that Disney made it out to be.

Born March 22, 1944 at South Springs Ranch in Roswell, New Mexico, Nautical was originally registered under the name Peter De Oro with the Palomino Horse Breeder’s Association. The ranch was owned by the Babcock family and is now on the national register of historic places. He had the ranch’s S and spear brand on the left side of his jaw. When Disney was filming The Horse with the Flying Tail, the brand was touched up with an eyebrow pencil to make it more visible.

As a 3-year-old, Nautical was sent to the Norton family for training. He was trained by Col. Anderson Norton and his daughter Suzanne Norton-Jones. Suzanne is now in the AQHA Hall of Fame. She remembers Nautical as being fairly typical as a young horse but says he did have a strong independent streak. She also said that both Nautical and his full sister, Rouge Ann, were natural jumpers. Suzanne rode Nautical at a show in Santa Fe; they competed in both English and western.

He was sold by South Springs Ranch in either late 1947 or early 1948 because the ranch wanted to purchase a stud. He was first sold to a Perry Boswell of Thorpland Farms in Upper Marlboro, Maryland. From there, the timeline gets a bit unclear.

Nautical seemingly dropped off the earth before reappearing under the name Injun Joe. The name was meant to be a nod to his western heritage. Supposedly, he was ridden by Joe Green at some point, though I haven’t been able to confirm this. What is confirmed is that by 1950 he was trained by Cappy Smith and was known as Pronto. He got to Cappy after being bet in a poker game.

Nautical was owned by a William Schlusemeyer from Virginia sometime between 1949 and 1950. Schlusemeyer bet Nautical in a poker game for somewhere between $35 and $70. Bobby Clark won the horse and immediately sold him to Cappy Smith for $200. Smith had the horse until November of 1950. By then, Nautical had yet another new owner, Millarden Farms. His rider there was Pat Dixon.

At Millarden, Nautical was known as Injun Joe. He and Pat Dixon won the Professional Horseman’s Association Trophy in 1953. He was at Millarden until Hugh Wiley purchased him in 1955.

Nautical’s early history definitely wasn’t the ex-ranch horse story invented by Disney. He was bred to be an all-around horse, and it was clear that he had talent. He had three, maybe four riders who are now in a Hall of Fame: Suzanne Norton-Jones (AQHA), Joe Green (Show Jumping), Cappy Smith (Show Jumping) and Pat Dixon (Show Jumping).

About the Author: First, I’d like to thank the Palomino Horse Breeder’s Association, Susan Spencer with the AQHA, Leah Tookey with the New Mexico Brand Registry, Marjorie Fiske, and Suzanne Norton-Jones for all their help with my research. As for me, I never expected this thing with Nautical to turn into two blog posts and I’m not sure where it’s going next. This all started in May or June 2013 simply because I was curious about a horse who’d been inducted into the Show Jumping Hall of Fame.