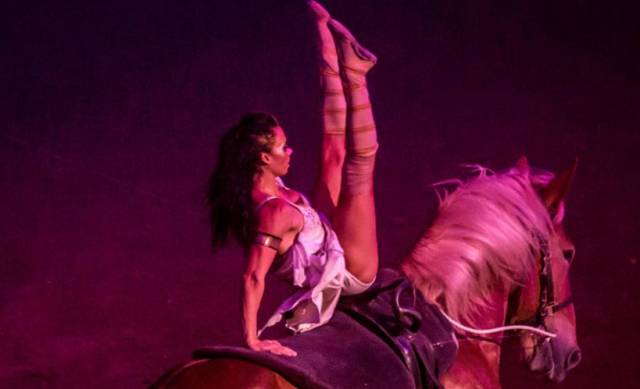 After a successful fall run in Vegas, this innovative aerial-meets-equestrian production is gearing up for an exciting new year. We speak with Big Horse Productions co-owner Alethea Shelton about the show’s incredible cast and horses.

First, let me say I loved the show!

I’m happy that you enjoyed the show! We work very hard to keep it going.

Big Horse Productions has been touring for 10 years, but “Gladius” is an all-new show. What can audiences expect?

Audiences can expect the unexpected! There have been horse shows and acrobatic shows in the past, but typically they appeal to either an equestrian audience or a non-equestrian audience. “Gladius” is a unique blend of stunning horses with talented humans that has something for everyone! Over half of the acts in the show are completely original and have never been seen by audiences anywhere in the world before. We also have an original score of rock music, created by the amazing Kevin Curry, that is unlike any other acrobatic show.

The aerialists throughout the show were amazing, especially when you add in the element of Roman riding. Tell us a little about the training involved for incorporating horses into the show.

The training with our horses is very consistent. We have a 37′ aerial rig built into our arena and they see aerialists all the time. For them, it is perfectly normal to have people flying over head! Of course, some horses are more nervous than others at first, but with those particular horses, we just start a little slower and go at their own pace of training. Sometimes it helps (with the Roman riding in particular) to bring in a very calm experienced horse and pair them with a new one so they can understand that it’s nothing to get worked up about. They can learn from each other.

A few of the acts are just insane. The one that immediately comes to mind is the fire act. How long does it take for the horse to be comfortable in that situation?

Just like the Roman riding, the fire training does depend on the horse. Some of our horses are a little more scared of either the scent or sound of the fire, so we will just start slow and light one fire torch around them. We will train with them slowly and consistently until they find it not to be a threat. We also will bring in other horses that have no problem with fire and have them work together. We use the horses in that act that obviously have no problem with it. We have several that really could care less! This year we have actually started spinning fire standing on their backs!

Although, I think my favorite part of the show was when the four draft horses were calmly working together. Tell us a little about how that act formed and the riders and horses involved.

All four of the riders in that act have 20+ years of competitive vaulting experience. All of us come from the same school of training, which was founded by Erik’s (the co-owner) parents, Yossi and Noel Martonovich. During our years of competitive vaulting, our school was known for having very consistent horses and as a personal preference, we chose the Belgian Draft. Yossi and Noel have a strong dressage background and I believe the horses were so good for vaulting because they consistently cross trained in work under saddle. It created such balance in them that was great for the vaulter’s trust. When we would warm our horses up under saddle at shows, people were actually very impressed. We discovered that it wasn’t very common that draft horses were highlighted in that way and we chose to create an act around it. To us, they are such versatile amazing animals and it’s incredible to see all that they can do!

Tell us more about your equine performers. What breeds does the show use and why?

We definitely use a lot of Belgian Draft horses. We have eight of them in the show! We like the gentleness of them as well as their willingness to learn. We had great luck with Belgians throughout our vaulting careers, so we tend to gravitate towards them as a breed. We do have a couple of black Percherons in the show as well. The audience really loves a giant majestic black horse! We have four Aztecas (Andalusian/Quarter Horse cross), which we use for dressage and liberty — they are all grays. We have two mini horses (comedy) and several quarter horses (chariot racing and trick riding).

In “Gladius” there are four ‘tribes’ of beings which are internally known as Protectors, Indebted, Eluminits, and Lokidians. The humans are basically ‘dark’ and ‘light’ and the story is a quest for balance and peace. We wanted the horses to have some color and breed contrast to highlight that. Now, of course, we have a lot of horses that we have owned for a long time and quite a few rescues, so we just worked them right into the storyline as well. It’s all about playing on everyone’s strengths.

Other companies are famous for not allowing mares. Are your performers all stallions and geldings as well?

In the past, we have typically used geldings. When “Gladius” came to be. however, we ended up with four stallions added into the equation and did not have any mares. In our second city we did acquire a mare because of her amazing training. We actually ended up with an act involving a stallion and a mare being ridden together. This little stallion just has a great disposition and it worked out just fine!

Tell us about the horses’ daily routine.

Every horse has different things that they work, depending on their job and their weaknesses. We have the horses on a training schedule and every one of them is ridden and worked in hand. The others are vaulting, roman riding, and/or working on liberty routines. We keep the training around a half hour each, with the exception of vaulting which can go an hour (with many walk breaks). The liberty training is even shorter: about 15-20 minutes to keep it fun for them. We also set aside time each week to work on acts and improve the show in different ways, even if we don’t know when our next show will be.

Outside of the show, your crew appears to have a lot of fun. Yes, I’m talking about the “Roman Parasailing” video. Who came up with this crazy idea?

That idea is 100% Erik! Erik Martonovich is the co-owner and creator of “Gladius.” We have worked together for 15+ years and he has never been known for his sanity! Things were a little slow and we had some reality cameras following us for a bit. He had this idea in his head for years and just decided to go for it. I thought it was crazy and couldn’t even watch! Our Belgians are rock stars, though and they just took such good care of him! He has since then done it several times and put together some awesome shots with the Go Pro!

Finally, where can our readers find out about touring schedules and shows?

We are working on the next plan for the full production. In the meantime, we will be featured at several large horse events this year with some of our acts, including Equine Affaire in Columbus, Ohio in April. Follow us on Facebook @ Gladius the Show!

Many thanks to Alethea for speaking with us. Go Riding!