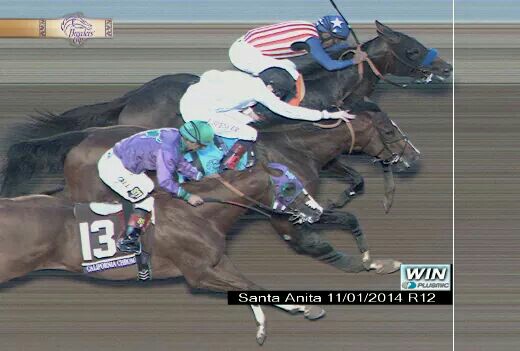 Three horse are neck in neck for the coveted honor of American Horse of the Year: California Chrome, Bayern and Main Sequence. Want to wager a bet on who’ll win?

The National Thoroughbred Racing Association, the Daily Racing Form, and the National Turf Writers Association announced this year’s nominations for the Eclipse Awards yesterday morning, and winners will be announced at a black tie event Saturday, January 17th at Gulf Stream Park.

The most coveted award is American Horse of the Year, and this year’s race may prove to be a photo finish. America’s Sweetheart California Chrome certainly had a momentous campaign to win the Triple Crown, but Bayern‘s captivating performance in the Breeder’s Cup against a legendary pack of horses that included California Chrome, Shared Belief and Tonalist may have sealed his place in the record books as the true champion of 2014, despite his controversial break from the gate.

California Chrome, Toast of New York, and Bayern battle in the Breeders Cup in 2014. Photo Credit: Scott Ableman, via Flickr

Some suggest that Chrome may miss his shot at the Eclipse history books because of controversial comments by his owners, who had a rough adjustment to the spotlight, but others suggest that voters (made up of the awards’ co-sponsoring bodies) won’t choose anything less than whomever they consider to be the best horse, regardless of their feelings towards the horse’s connections.

Main Sequence may be the dark horse in this crew, but he’s no one to sniff at. At five, it’s an impressive feat to nab the third nomination in a season of great three-year-olds, but his win in the Breeder’s Cup Turf Classic was certainly a beautiful sight, and an amazing capstone to an unexpectedly remarkable season. If you’re into comeback kids, Horse Nation, this is your guy. Originally raced in Britain, he won his maiden race as the 50-1 longshot and went on a hot streak for the next year, moving up the grades and tearing things up until a still-strong second place finish in the Epsom Derby. At that point, he started to falter a bit, losing momentum and gaining in temper. He lost every race as a 4-year-old, and he was gelded and sent to the states to see what else he could do.

The fiery Main Sequence heading to the gate. Photo Credit: Urasimaru on Flickr

Apparently, a lot. Main Sequence exploded into 2014, winning three stakes races in a row, and then the ultimate commanding performance in the Breeder’s Cup Turf. The castration may have settled him down a bit, but the come-from-behind gelding still angrily swished his tail to victory in every race. Can that come-from-behind momentum propel him to Horse of the Year victory over America’s Sweetheart?

Let us know, Horse Nation! With three impressive gentlemen, all with complicated histories filled with triumph, disaster, and destiny, who deserves the title of Horse of the Year?

We’ve also included the full list of Eclipse nominations below. Other favorite nominations you might recognize include a nomination for late bloomer Goldencents in the Sprint Horse category, a worthy nod to last year’s Horse of the Year Winner (and the most interesting horse in the world) Wise Dan in the Older Male Horse category, a repeat appearance in his age group for Shared Belief (who some thought should have a shot at Horse of the Year honors) and the captivating Untapable in Three-Year-Old Fillies. (Anyone else wishing we’d see Rosie Naprovnik in the Outstanding Jockey category?)

Horse of the Year