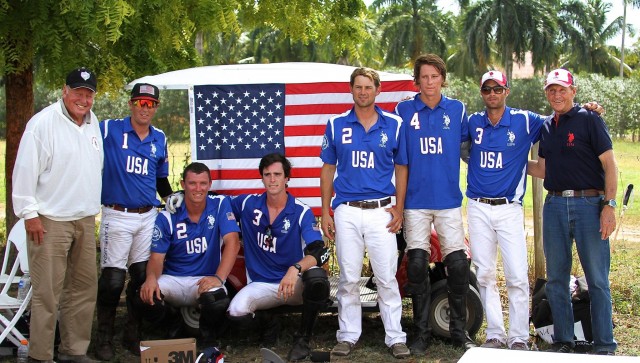 From all of us here at Horse Nation, our gift to you: the men of the United States Polo Team. XOXO.

A press release recently came our way announcing that the United States polo team had captured victory in the FIP (Federation of International Polo) Zone “A” Playoffs, beating out teams from Canada, Dominican Republic and Mexico. This win means that the US will compete at the FIP World Championship Finals, representing all of North America, on March 25-29 in Santiago, Chile.

So a big congratulations to the US polo team; we’re honored here at Horse Nation to give you our heartiest support and praise. International polo is a highly competitive discipline of equestrian competition and it’s just fantastic that the US is holding its own. The US Polo Association’s recent efforts to nurture the best intercollegiate players and give them a venue for competition has clearly paid off in spades as the national team proves itself to be able to play with the big boys…

Okay, yes. The team is great. Polo is exciting. But let’s stop kidding ourselves. There’s one big reason we love to watch polo, and for once, it’s not about the horses. We at Horse Nation have a long history of stalking polo players (we’ve written not one but two pieces on the subject which you can review here and here) so we hope you enjoy the latest installment.

Horse Nation, may I present to you the horsemen of the US Polo Team.

While based in California, Jesse was actually born in New Zealand and still travels there to visit family. He plays a string of Thoroughbreds comprised of New Zealand and American thoroughbreds (as well as one from Mexico.) Jesse’s father played professional from age 18 so the son is following in his father’s footsteps with the goal of beating his handicap rating. Jesse’s other polo goal is to be known for the quality of his string: “I look for horses that are well balanced, with good conformation, a kind eye and a short back. I like being around the horses.” Jesse describes his horses at length, noting that “on any given day any of my horses could be my best chukker.” Out of his 8 horses described in his string, our favorite was Jacob: “He is fast and has an unbelievable mouth, and uses his size advantage in the ride offs. (He is also a master at untying knots and a barn favorite.)” (From US Polo.) Here is Jesse playing polo into the sunset:

…and here is Jesse winning a giant check for being awesome:

Jared comes from a polo-playing family, which created a natural environment for him to get hooked on the sport. “I love everything about it,” Jared states. “There is no other full-contact sport that involves an 800-pound animal.” Jared has his own string of horses, including Cheeky (“my best horse,”) Castana (“one of the fastest horses I have ever ridden,”) Trainwreck (“just like his name, he’s bucked me off 6 times,”) and Scrappy (oddly described as “does not play nearly as nice as her conformation would suggest.”) Jared respects good horses, noting that “it’s amazing what great horses can make you do better.” (From US Polo.) Here’s Jared looking pretty pleased after winning the Zone “A” Playoffs:

And here’s an action shot from the match against Canada:

Will is a serious polo professional; his online profile skirts around any personal interests or hobbies and instead highlights his various accomplishments within the sport (including leading Texas Tech to a national intercollegiate championship. Ladies, this is a man not afraid to show off his equestrian tan (check out them white legs) while playing tennis against his teammate Felipe Viana:

Patrick is a little bit of a mystery man as he does not have a profile on the US Polo website. However, from our Facebook stalking, he’s a West Coast native and joined Team USPA in 2013. He played for his intercollegiate team at Westmont University which transitioned him to Team USPA competition, allowing him to excel to the national level. Really, all you need to know about Patrick is this:

…and of course this:

Born in Uruguay, Felipe grew up on his parents’ horse farm. While not a polo player himself, Felipe’s father encouraged his son to get involved in the sport and signed him up for lessons at age 7. At 18, Felipe moved to Charlottesville to enroll at the University of Virginia, where he majors in economics and history. “I think that whatever I do I should do 100%, so right now it’s school’s turn,” Felipe states, intending to pursue polo professionally after graduation. (He seems to be off to a good start considering polo is currently a hobby.) He doesn’t own any horses in the US (he rides out of the Virginia Polo Club) but does have his own string in Uruguay: “What I like most about my string is that all of the horses were made by me and thus I feel I know them to perfection. They are not perfect, but I can use their strengths and hide their weaknesses.” His favorite horse was a Thoroughbred mare he played as a youth named Ke Farola: “Even though I’ve probably played better horses than her, I never played the best out of me on any other horse.” (From US Polo.) Here’s Felipe in action…

…and here is Felipe playing tennis. (Because why not.)

Mason’s official USPA profile is lacking in personal information, but lists about a dozen high-goal events he helped win. Our Facebook stalkery got a little personal–enough that we learned that Mason appears to be recently wed (sorry, ladies.) However, that doesn’t stop us from admiring photos of Mason both in polo action…

…and also in coaching juniors. (Cue the “awwwww.”)

If you’ve suddenly found yourself to be a new fan of polo, follow Team USPA on Facebook and show your support as the team prepares for the World Championships in March.