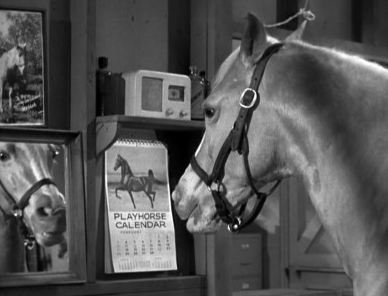 And no one can talk to a horse of course. That is, of course, unless the horse is the famous Mister Ed.

Mister Ed is an American TV comedy that first aired from January 5 to July 2, 1961, and then on CBS from October 1, 1961 to February 6, 1966. The show concept came from a series of short stories by Walter R. Brooks, which began with The Talking Horse in the September 18, 1937 issue of Liberty magazine. The success of the Francis the Talking Mule movies (1950 – 1955) also played a pivotal role in the show’s creation.

Mister Ed, a talking palomino, was played by gelding Bamboo Harvester and voiced by former Western film actor Allan Lane. The role of Ed’s owner, a kind but klutzy architect named Wilbur Post, was played by Alan Young. Much of the comedy in the show is derived from Ed’s mischief and the fact that he only speaks to Wilbur. According to the show’s producer, Arthur Lubin, Young was chosen for the lead role because he “just seemed like the sort of guy a horse would talk to.”  Ed’s ability to talk was never explained.  In the first episode, when Wilbur questions the situation, Ed offers the show’s only remark on the subject: “Don’t try. It’s bigger than both of us!”

Foaled in 1949 in El Monte, California, the gelding was trained by Les Hilton. He was of Saddlebred and Arabian breeding.

In 1968, two years after the cancellation of Mister Ed, at the age of 19, Bamboo began to suffer from a variety of age related ailments, including kidney problems and arthritis. He was euthanized in 1970.  A second palomino horse, which had posed for still pictures used in press kits for the show, survived until 1979.  After Bamboo Harvester’s death in 1970, the second horse was unofficially known as Mister Ed.

Here are just a few of my favorite shots from the show: