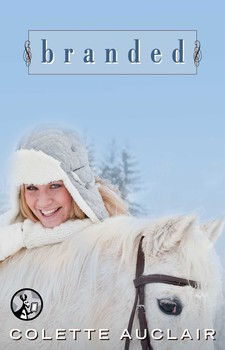 As readers of my reviews may recall, the first two books of Colette Auclair’s Aspen Creek series, Thrown and Jumped, both kept me up late as I devoured pages like a horse who thinks its starving. With Branded, the final* book in the series, I finally got smart and started reading in the morning. Except then I had serious difficulty doing anything else all day long (my horses will testify: I was 30 minutes late with their dinners—gasp!) and it still didn’t help because I stayed up past midnight just so I could find out how the romance between dressage rider Cordy and ex-pitcher Jack would turn out.

I confess, when I learned that Branded featured a dressage rider, I got a little worried. I’ve read enough dressage-themed romances to know that sometimes authors go a bit overboard with the Dressage Queen stereotypes and create characters who are nearly impossible to sympathize with. I’m happy to say that while Cordy does have a perfectionistic streak and can be a bit tightly wound, she comes across as a very real, likeable, complex character.

All of Auclair’s Aspen Creek protagonists have been women in transition, not just in their romantic relationships, but also in their careers, and Cordy is no exception. Struggling to regain her equilibrium after the at-the-altar demise of her wedding plans, Cordy lands her first consulting job, helping find off-season opportunities for a posh resort in Aspen, Colorado. While staying at the resort as part of her research and trying to forget her ex-fiance, Cordy meets Jack.

Suffice it to say that piano-playing, animal-loving Southern gentleman Jack is my favorite of the three Aspen Creek romantic leads. Not that Thrown’s Grady (a down-to-earth, funny movie star), and Jumped’s Finn (a generous, tenacious, and sweet architect) are in any way subpar. But Jack? Well, he’s got all those qualities plus some other really attractive skills. And he likes to watch Cordy ride. Which is to say that Branded is best for those 18 and over, because it is hands down (and up and around and everywhere) the steamiest of the three novels.

It’s also the least horsey, but it’s peppered with descriptions that only the truly horse-y will fully appreciate—my favorites being the moment when Cordy establishes “Halt. At. X” as a safe word (I told you it was steamy!) and when she gives herself “an emotional half-halt.” Another scene I particularly enjoyed is when Cordy meets Amanda (from Thrown). The two immediately connect and their horse-y conversation gallops away, leaving Jack and Grady twiddling their thumbs and rolling their eyes. I’m pretty sure my husband would recognize that scene. And then there’s Cordy’s dreamboat horse Marcas, and a horse Cordy meets at Beth’s (from Jumped) rescue farm. Cordy’s relationship with these two horses and the hints at her training philosophy are wonderful. And, despite what I said about this being the least horsey of the three novels, dear Lord, it’s probably still got the most intense horse scene of the three novels. Prepare yourselves: it gets emotional.

Even if it made me cry, I ate it up and enjoyed every second of it. Auclair does an excellent job balancing the weighty, emotional moments with her signature humor, witty banter, and sweet romance, all of which are on full display. This is a fabulous book to curl up with under a cozy blanket when you need an escape from the holiday madness.

Branded goes on sale December 15th (as an ebook only), but guess what?? I just happen to have two extra Advanced Reader Copies (ARCs) to give to two lucky readers (ARCs are publisher’s proofs—there may be errors or differences between them and the final book. They look like very utilitarian paperbacks. But hey! They’re collectible!). Stay tuned for the official giveaway announcement.

*Have you gobbled up the Aspen Creek series (like me!), licked your rubber tub, and still find yourself wanting more? Please join me in a public outcry for another book (a little bird told me it might work). Perhaps there’s a snow polo player in Aspen, just waiting to inspire a new novel? (While we wait for our hew and cry to do the trick, check out M. Garzon’s Blaze of Glory series and polo player Jaden, if you haven’t already).