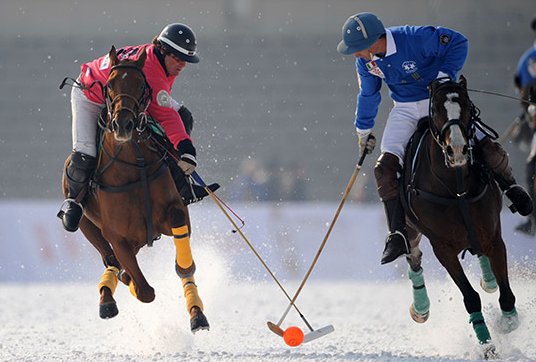 The sport of snow polo was first introduced in 1985 on a frozen lake at St. Moritz, Switzerland, but in the U.S. is competed exclusively in Aspen, Colorado.

Snow Polo has rapidly gained in popularity and today is played in Switzerland, Italy, Austria, France, the United States, Argentina, Russia and Spain. The sport is also gaining ground in Asia, particularly in China where the inaugural Snow Polo World Cup 2012 took place at the Tianjin Goldin Metropolitan Polo Club.

Snow polo is a modified version of polo.  Games are played on a snow-packed arena, smaller than a traditional polo field, surrounded by fencing. Teams are comprised of three players and play consists of four 7-minute chukkers. The horses are shod with special cleated shoes to provide better traction. The ball is larger, lighter and bright red.

Gonna need to see some video of that? Here’s a clip from the first chukka of the 2014 Snow Polo World Cup, held in January, with New Zealand facing off against the USA:

World Class Polo players will be competing in Aspen, Colorado this December 19th and 20th at the only snow polo venue in the USA.

Judging by the sponsors and the fact that it’s being held in Aspen… I’m guessing this is a pretty posh event. In other words, make sure you wear your Dubarrys and unstained jeans if you go. Here’s where you can buy tickets.