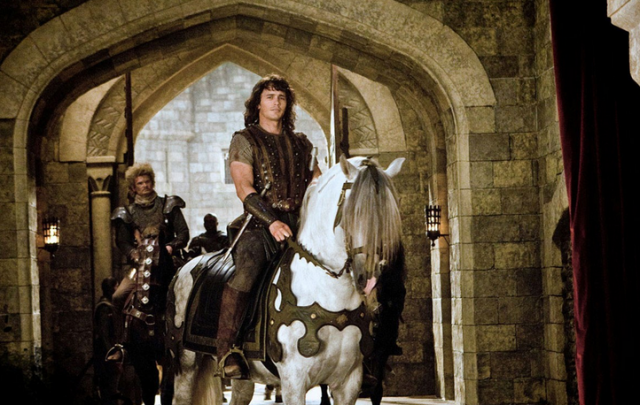 Bummed out by Daylight Savings Time ending? Stuck indoors by frigid temperatures? Need a distraction? I suggest taking some time to enjoy a few hot knights on those cold days.

Let’s start with Mr. Channing Tatum, seen here in The Eagle of the Ninth (2011). He runs around, fights some Picts, restores honor to his family’s name… yada yada yada… it’s Magic Mike with horses and swords. Awesome! The flick also stars Jamie Bell, who actually appears to know his way around a horse.

Maybe Channing isn’t your style? Too many muscles, too few brain cells? Well, you might like to watch Liam Neeson and Orlando Bloom defend Christianity in Kingdom of Heaven (2005), rated R. A princess, a leper, a knight, and King Richard walk into a bar…

Or perhaps you just want a good old-fashioned love triangle? In that case, you should watch Sean Connery and Richard Gere battle it out in First Knight (1995). Two hot men + one woman = somebody always dies. You know the story.  Side note: Richard Gere really does loves horses, Appaloosas in particular.

Want the same love triangle with younger, hotter characters? Check out Tristan and Isolde (2006) starring James Franco. I actually love this movie. It’s soooo cliché but I just don’t care. James Franco is as he should be… brooding and mostly naked.

If you want a goofier James Franco, check out Your Highness (2011). This satirical comedy also stars my imaginary BFF, Zooey Deschanel. It’s rated R, though, so young’uns shouldn’t watch.

If you’re looking for easygoing family entertainment then Heath Ledger of A Knight’s Tale (2001) is your man. It’s always fun to root for the underdog equestrian who hopes to defeat the rich, spoiled brat! Tip: This flick will be new on Netflix this month!