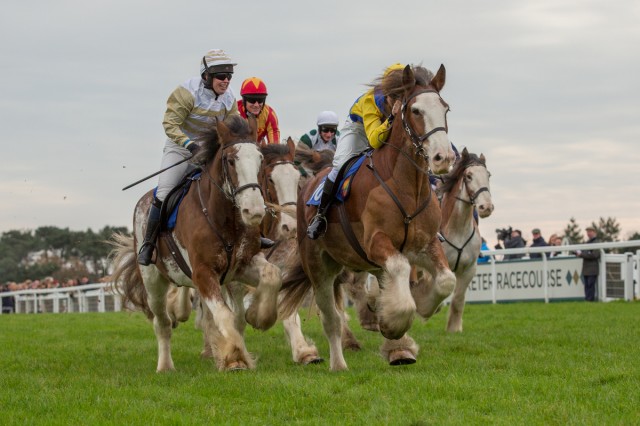 While we on this side of the Atlantic spent the weekend panicking about the rumored retirement of our favorite hitch of Clydesdales, our friends in England were racing theirs. The second annual Clydesdale race took place over two furlongs at Exeter Racecourse on Saturday, November 23rd to help raise awareness of Clydesdales as an endangered breed (there’s estimated to be only about 900 registered Clydes in the world) Also on the card was a Dartmoor pony race with a similar purpose in raising breed awareness.

The Clydesdales are all owned and trained by Tim Ancrum and Aileen Ware of Adventure Clydesdale, which we profiled earlier this month: This riding service in Devon uses exclusively Clydesdales in their string for half-day, full-day and multi-day riding adventures. The big horses love a good gallop and have been conditioning for the race all autumn on the moors:

In addition to raising Clydesdale support and awareness at Exeter, the race also was a fundraiser for the Devon Air Ambulance Trust which manages a local emergency helicopter service. Funds were raised thanks to the donations of “owners for a day” who put up £100 to serve as a Clydesdale’s owner for the day. Owners received free entry to the track and the opportunity to accompany “their” horse for post-race festivities.

The horses were all piloted by professional jockeys, who seemed to enjoy “galloping” a slightly different kind of horse (the Clydes were estimated to reach speeds of 18-20 mph — kind of like racing a dump truck). A great crowd turned out in support of the Clydesdale race, which took place about an hour before the regularly-scheduled Exeter card.

The racing form for the Clydesdales offers some great gems: below are my personal favorites:

#10
TOM PARKER: This is the Usain Bolt of the Clydesdale world.

#11
BIG ALLAN: Last year Big Al was third, but this year he is even bigger and stronger and more experienced and still has his very long legs.

#12
SIRYL: Always enthusiastic, will go well as long as his forelock doesn’t get in his eyes.

#13
ECCO: Quickest when dinner is being served.