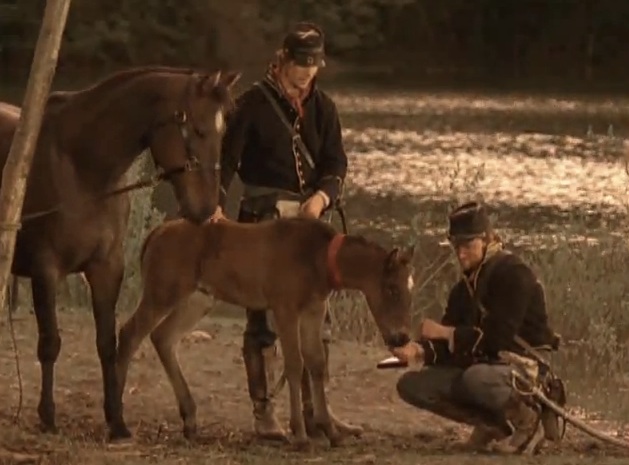 This week we check out a Hallmark Channel original, The Colt, filmed in 2005 and starring Ryan Merriman.

The Colt opens during a gruesome battle in the Civil War.  Jim Rabb (Merriman), after witnessing his brother’s death, seeks out his mare only to find she has given birth to a colt.

For reasons that I failed to understand, the birth of the colt was a huge problem for the soldiers.  It would “slow them down,” “bring them shame,” etcetera etcetera….so the colt has to die.  What!?!?

Luckily, this is the Hallmark Channel not the Walking Dead so the colt is miraculously spared by a misfiring rifle!  YEAH!  Shortly afterwards, the colt shows “conspicuous gallantry in battle” and becomes the unofficial mascot for the Union cavalry.  They give him a red bandanna. It is adorable.

A few days later, after being attacked by a Rebel sniper, Jim and the horses are separated from their regiment.  On their journey back from enemy territory, they meet a variety of characters:  an eager journalist looking to make a name for himself, a dying Rebel soldier who begs for a Christian burial and a letter to be sent to his sister, and a kind farmer with bad lungs and a big heart. They catch up with the Union cavalry just in time to push across the river, which happens to be heavily guarded by Rebel forces.  In the ensuing chaos, the colt is separated from his dam and swept away.

Can the colt possibly survive the deadly waters?  You’ll just have to watch and see!

This movie surprised me.  It was like War Horse with 1% of the budget.  The first hour was pretty run of the mill, although slightly above par for a made-for-TV flick.  The story was solid and the acting was surprisingly well done. Ryan Merriman (an actor who shares my exact birthday!) has not one or two but three equine-centric movies in the works for 2015, including The Sunday Horse.  I want to watch all of them.

This film was entirely character driven as most of it was spent with the men talking just before and after small skirmishes.  I doubt Hallmark has the budget for an epic war film full of CGI special effects after all. Honestly, we do not need to see the cause of death so long as we feel the after effects. I don’t know if there’s anything sadder than a battered war hero crying over his dying friend and saying, “Go on now.  Go on home to yer Momma.”

And the ending!  Oh geez…I was shocked.  I did not see that coming.

I give The Colt 2 ½ Golden Horseshoes.

Watch Part 1 of The Colt here: