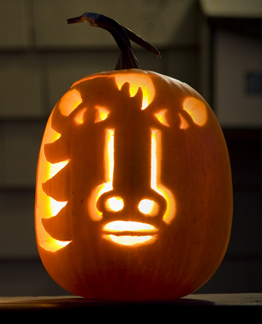 Take our quiz to find out what you should dress up your horse as for this Halloween–and if you’ve already got a costume in the works, don’t forget to share it with us for our annual costume contest!

1. What does your horse think about going on the trail?

b) Sometimes he’s fine…sometimes he likes to take off bolting, bucking and farting just for fun.

c) Ew. Isn’t there mud in there? Princess Pony does NOT like getting her toes wet.

d) You mean like going in…the woods? There are lions and tigers and bears in there!

e) She calls to her buddies in the field as long as they’re in earshot, but otherwise, she’s fine.

2. You’re switching your horse’s pasture. How does he or she react?

a) By minding her own business and focusing on eating.

b) By running up to her new pasturemates , ears pinned and teeth bared.

c) He tries to touch noses with his new pasturemates, whinnies like a sissy, and then runs back to the gate.

d) By getting everyone else in the field all worked up.

3. Fall is here, and with it, rainy, icky weather. What would your horse prefer to do?

c) Skip the ride in favor of a spa day. Currying, clipping, warm towel face rubs…he knows he’s worth it.

d) We could go for a ride…but if the shadows have changed or the wind blows wrong…we may end up in the next county.

e) Weave in his stall like a psych ward patient.

4. What discipline best suits your horse?

a) He’s a jack of all trades, but a master of none–but he is a great husband/guest horse.

b) Showjumping. She likes to attack the jumps, sometimes quite literally.

c) Show hunter. She knows how to shine above the rest!

d) Dressage. We won’t talk about what happens when we try to venture out of the arena…

5. Which pumpkin fits your horse’s personality?

You already know your pony is an angel on the inside, with all the shenanigans he puts up with. Bouncing kids, noisy four-wheelers, your first horse show–he might give a little sigh at how ridiculous human antics are, but Halloween is just one more opportunity for him to show what a saint he is.

Looks like your horse has a little streak of evil  buried not-so-deep down. Maybe she passes for normal most of the time…but on Halloween, you should share her nightmarish ways with the world. Bonus points for naughty behavior during a horse show costume class.

Let’s face it: your horse is the living incarnation of your childhood Breyers or My Little Pony toys. She’s got you wrapped around her little finger (hoof?), and she knows it. So why not indulge the horse who loves to be pampered with a day of grooming and a tasteful “cutie mark” on her rump to make sure everyone else knows how special she is?

You may not be able to actually get a costume to stay on your spooky horse, but at least Halloween gives you an excuse to do some desensitizing.

Your horse is kind of a weirdo, isn’t he? The type to poop in his water bucket, or get mysteriously stuck in the round bale feeder? We thought so. Let his freak flag fly by getting the most random costume for him you can think of.