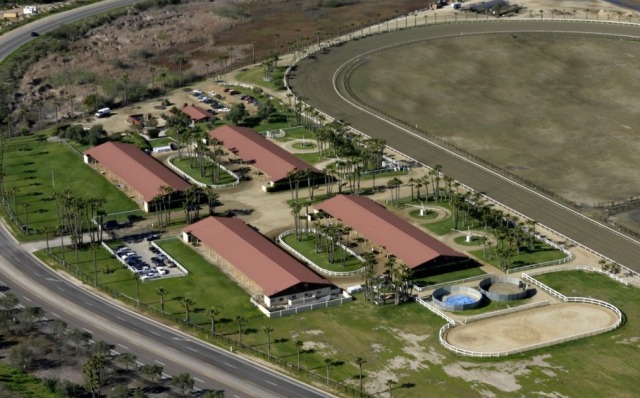 Rancho Paseana, formerly owned by Jenny Craig of the weight loss program fame, has a new owner. The property was previously used as a layup and training facility for racehorses.

The horse farm was originally developed by former San Diego Chargers owner Gene Klein and trainer Wayne Lucas as a premier racehorse facility. Jenny Craig and her late husband Sidney purchased it in 1997 from the estate of Pete Rozelle, a former NFL commissioner.

At its peak Rancho Paseana housed nearly 300 horses but, as we reported last year, Craig closed the facility in 2013, citing financial reasons.

“Frankly, I’ve been putting it off for… years, after my husband died,” Craig told U-T San Diego last year in reference to Sidney, who was an avid horse-racing fan.

“I felt I had to keep it open, if nothing else, in his memory,” she added. “I tried to make it work. I tried everything I could without reducing the quality of services.”

Listing agent Catherine Barry, of Barry Estates in Rancho Santa Fe, told U-T San Diego that Craig received offers to develop it as a golf course, hotel or subdivision but that “her dream was always to sell it to someone else to keep it for horses.”

The property has been listed for sale since 2010 when it was posted for a staggering $30 million. The property includes a white fenced, three-quarter-mile dirt training track, four 30-stall barns, fanned paddocks, rehab equipment for injured horses including five hot walkers, and two apartments with a French motif. It’s less than five miles from Del Mar Race Track.

Want the grand tour? Click on any thumbnail for a larger image.

Gates’ daughter Jennifer is a well-known junior rider on the hunter/jumper circuit. She trains with Jack Towell of Finally Farm.

Here she is competing at the Pennsylvania National Horse Show in Harrisburg, PA, on River Bird last year. River Bird, an Irish Sport Horse by Cruising, competed through the Grand Prix level with John French.

After allegedly spending about $1.1 million renting homes in the area in recent years while Jennifer competes, according to South Florida Business Journal, Bill Gates made headlines last year when he bought another equestrian estate in Wellington for $8.7 million. You can check out photos of it here.

Well, at least they’re spending their money wisely — at least in our opinion! We’ll look forward to seeing what the Gates do with Rancho Paseana. It should be very exciting if this property develops into a world-class venue for the west coast.