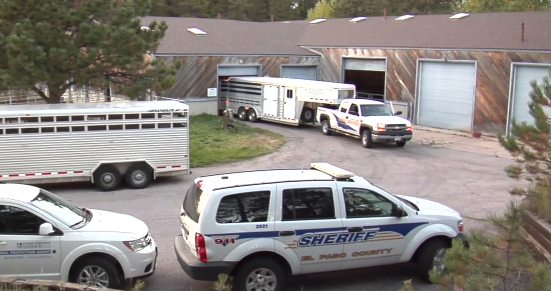 In a dramatic and disturbing series of events over this past weekend, 10 live horses and four llamas were discovered and eventually removed from a barn in Black Forest, Colo., where they were living among the remains of about a dozen deceased horses.

Denise Pipher had lived next to the barn in Black Forest, Colo., for a month or two, having met the boarders when she moved in. Nothing seemed amiss until Friday afternoon, when Pipher’s dog ran into the barn, forcing Pipher and her daughter-in-law Diana Regula to come inside to find him. There, they discovered the tarps covering the horse skeletons, and live horses living in manure six feet deep. Appalled at the conditions inside the barn, the women called the local authorities and an investigation was launched.

Surprisingly, though the 10 living horses and four llamas were obviously unhealthy and living in deplorable conditions, they were not deemed to be in immediate danger and therefore could not be legally seized by the authorities, which raised enormous public outcry in the Black Forest community.

Over the weekend, the story of the horses still living in squalor spread first across the region, then the state, then the nation, and even internationally, with horse lovers all over the world calling, emailing and posting to social media to demand justice and proper care for the animals. The El Paso County Sheriff’s Office responded with a report promising that they were doing everything they could legally, with members of the Mounted Patrol assisting the owners in improving the care of the horses.

Over the weekend, public interest grew even greater when rumors were confirmed that one of the live horses in the barn was the great cutting champion and sire Dual Peppy. His entire roll of accomplishments is too long to list, but includes multiple AQHA Congress championship titles in cutting, multiple circuit championships in cutting, top-10 rankings over consecutive years as a sire of champion reined cow horses, the sire of high-point reining horses and the sire of multiple Register of Merit earners. The broker who arranged the sale to current owner Sherri Brunzell grieves for the stallion, calling himself responsible for putting the horse “in this hell.”

Sherri Brunzell has been unavailable for comments to the press, but her husband Rick has come forward, stressing that his wife owns the horses and that personal health concerns over the winter made it impossible for them to appropriately bury the deceased horses in the barn. He claims that the horses died of colic over the winter. (The likelihood of 12 horses dropping dead of colic in the course of one winter without attracting the notice of local veterinarians is another story, but we’re going to leave that one alone for now.)

Concerned horse lovers around the world were relieved on Monday to hear that local humane authorities were finally coming in to remove the horses and llamas to rescue centers. The El Paso County Sheriff’s Office informed the public that they had to wait for veterinarians to assess the animals’ condition before the authorities were legally allowed to seize the horse — there’s plenty of speculation that the case wasn’t handled well, given how long it took to have the animals removed. Whether or not any of those rumors are true are less important than the fact that the survivors of this Black Forest nightmare are on their way to a better way of life.