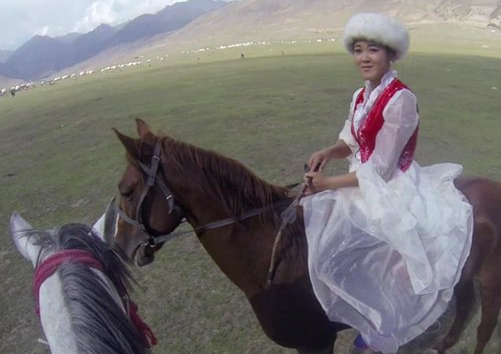 And that’s just one of many events that are being featured at the World Nomad Games, a five-day event aimed at celebrating the culture and tradition of Asia’s nomadic tribes. This inaugural event, which is taking place in Kyrgyzstan through Sunday, features more than 400 athletes from 20 countries.

It’s OK, we didn’t know where Kyrgyzstan was either.

Since horses were essential to nomadic life, many of the events take place on horseback. In addition to “girl chasing,” these include:

Oodarysh — wrestling on a horse

Mounted archery — target-shooting from the back of a galloping horse

To really wrap your head around this thing, go have a look at this amazing photo gallery from the Games. It kicks off with an image of a stuntman riding a horse while on fire…

…and just gets crazier from there.

BBC World News was also on the scene capturing all the action for us westerners. In this video there’s an interview with the 16-year-old girl who is the object of this year’s girl-chasing event. “I became closely involved with horses when I was a child and I have competed in girl chasing for over four years now,” she explains. “I have whipped boys many times… I love it and it makes me feel very much like a nomad.”

Many thanks to Ruth Kovatch for the tip!