This week we check out, literally, the only movie about driving I could find on the interwebz — The Great Dan Patch (1949), starring Dennis O’Keefe and Gail Russel.

The film begins with Davy, a chemist currently living in Chicago, arriving home to get married to Ruth, a girl who is a “mite stuck up.” Davy takes Zelica, a new mare recently acquired by his father, around the track before saying hello to his betrothed. Training against our protagonist is the local stable girl, Cissy. 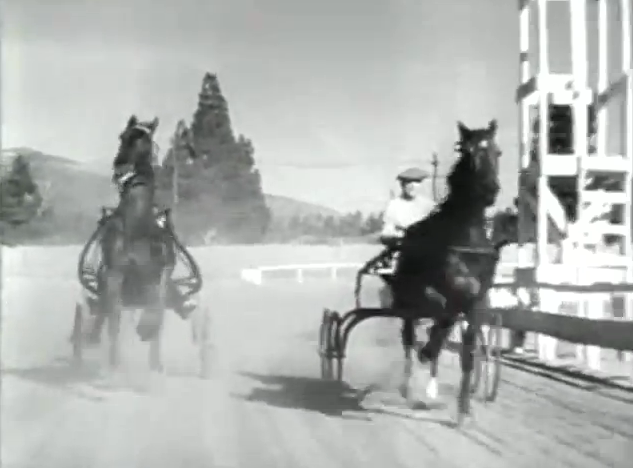 It’s obvious that the beguiling Cissy’s good looks and knowledge of horses intrigues our Davy. 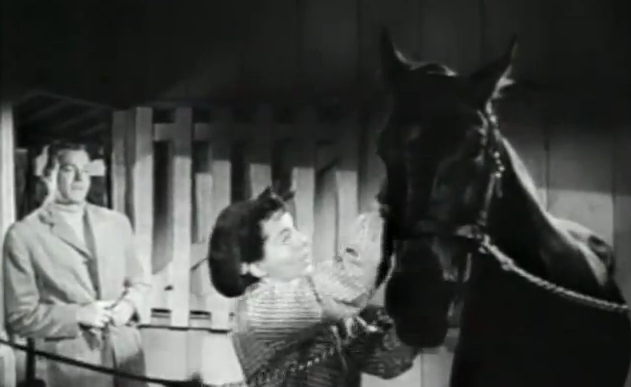 Unfortunately, Ruth shoves her way into the barn and interrupts their conversation. She complains about Davy’s love for horses, the smell of the stable, and just about everything else.

Ruth:  “Darling, couldn’t we go outside?”

Davy:  “Why, girl, this is perfume!  Horses, leather, liniment…I could shut my eyes and know I was in a racing stable.”

I think we all agree Ruth isn’t the girl for Davy? The character gets even more annoying when the wedding plans begin. Apparently “people who count don’t get married quietly.” Ruth also is not pleased that Davy has taken a new job in Indianapolis, a far cry from the Chicago she had been dreaming about.

Fast forwarding a bit, Ruth and Davy are now married and having a fight about going to see Zelica in her first race. Davy goes to the race regardless, only to witness a horrifying moment when Zelica is hooked up to a “regulation bike” accidentally. In the first corner, the mare puts her leg through the spokes ending her race career forever. 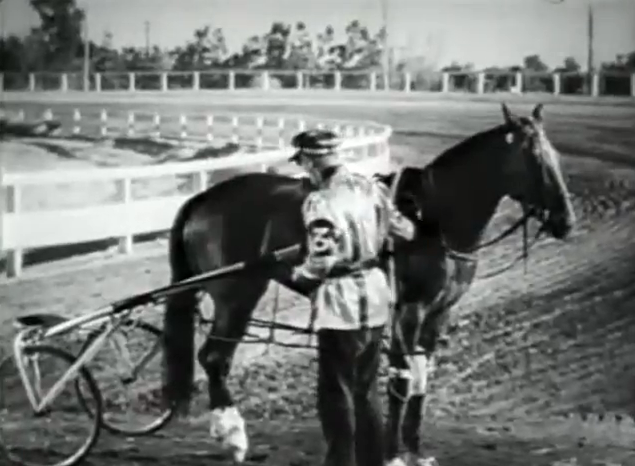 Zelica is bred to the infamous stud Joe Patchen, and the great Dan Patch is born. Three years later Dan Patch begins his training, impressing crowds with a solid “two-four clip.” Then tragedy strikes. Davy’s father, Daniel, falls sick and dies. His last words were a plea to see Dan Patch at his window and for his son never to fail the horse. No pressure. 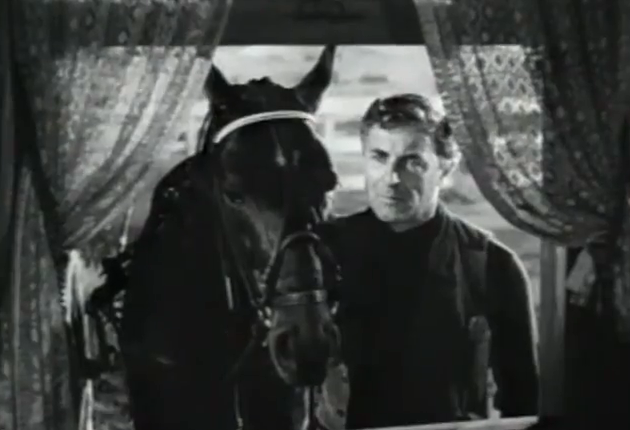 Davy immediately builds his own track and hires Ben and Cissy to train exclusively for him, but Ruth is not at all pleased with her husband’s “little hobby.” Dan Patch and Davy steam ahead anyway, sailing through Patch’s first race with an easy victory. 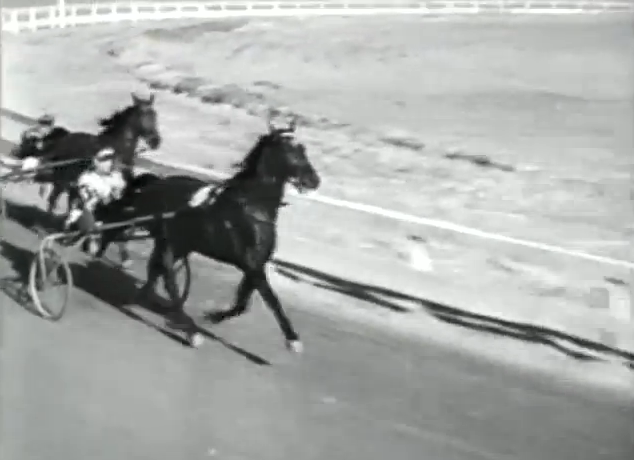 The good luck continues and the following year Ben enters him in the Grand Circuit. Davy drives him in an exhibition mile, breaking his sire’s record with a time of 1:59:45. 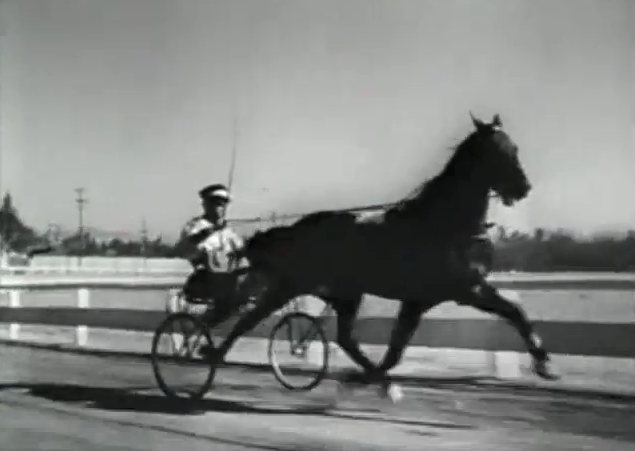 Davy gets bad news just after the record-breaking run. He’s lost his contract with Sulfur Company and no longer has a salary. Ruth insists he sell the farm and all the horses. On presumably his last visit to the stable, the sparks between Davy and Cissy fly. Literally, the barn starts to burn down! 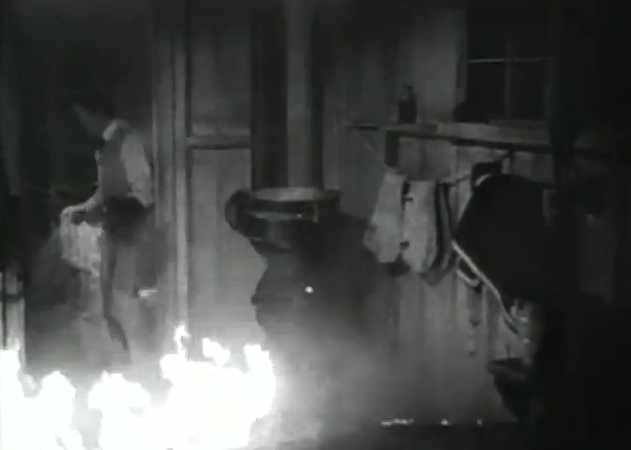 Will they save the horses from the fire? Will Davy and Cissy finally come to terms with their unrequited love? You’ll just have to watch and see!

This movie is very old. It’s black and white, the sound crackles, and the acting is let’s say… theatrical. Yet, I still liked it. The horse scenes seem authentic and I loved the character Voodoo that serenades us with accordion style blues music. 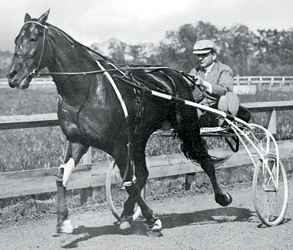 Dan Patch was a fascinating horse that I had never heard of. Born in 1896, he became the top pacer of his day, beating world record speeds at least 14 times. He was the fastest mile by harness, with an official time of 1:55:15 and an unofficial time of 1:55. He was an instant celebrity with endorsements including toys, cigars, washing machines and automobiles. Dan Patch died in 1916. His unofficial record of 1:55 held strong for 54 years, when Adios Butler finally clocked in at 1:54:3.  Most of the movie’s drama — the troubled marriage, the chemist turned horse trainer, the rebellious trainer’s daughter — was untrue, but Hollywood has to have some fun too.

I give The Great Dan Patch 2 ½ Golden Horseshoes.

This movie is available free via the Internet Archive — check it out here.