This week we check out a grandiose fairy tale complete with Russell Crowe, Colin Farrell, Will Smith, a whole lot of lens flares and a magical Andalusian.

Winter’s Tale opens with “What if once upon a time…”  A sweet, melodic voice talks of angel wings, miracles, and magic while a mishmash of images from 2014 and 1895 bombard the screen.  We talkin’ backstory and foreshadowing, folks.  Lots of it.  To sum up, two recent immigrants are turned away at Ellis Island because they are sick.  They risk everything and put their baby on a stolen toy boat with a small engraved gold plate that reads, “City of Justice.”

Fast forward to 1916 and Colin Farrell (presumably the boat baby) is being chased down by Russell Crowe and a horde of knife wielding minions.  Luckily, Farrell finds an Andalusian bridled up and ready to roll.

Seriously, did that horse just jump 20+ feet in the air?  Russell Crowe growls, “He’s got the (expletive) horse!” alluding to the fact that this is no ordinary equine.

Then we are introduced to the Penn family and the lovely Beverly, who is dying of consumption.  She sees “everything connected by light,” which basically means she sees lens flares that could rival a J.J. Abrams movie.

We then learn Pete is being hunted by his previous employer, a gang of thieves headed up by Crowe.  Pete plans to escape with Horse to the countryside.

Mr. Bad aka Russell Crowe puts a $500 bounty on Horse and Pete.  As luck would have it, Horse leaves some kind of trackable trail of energy that moon-reflecting gemstones can map…  Wha?

Meanwhile, the dynamic duo of Horse and Pete are racking up stolen goods in preparation for their trip north.  They just happen to see the Penn family (minus feverish Beverly) leaving for their own trip to the countryside.

The mansion looks ripe for the picking so Pete scampers inside, just missing Beverly as she heads for a bath to cool down her raging fever.  The two run into each other and BOOM!  → Starcrossed lovers.  Well, not quite, but just nearly.  Beverly, rather than being frightened by Pete, invites the burglar to tea.  They charm each other, but both assume they will never meet again. Yeah right.

Aaaccchhhh!  Why does Russell Crowe’s face look like that?

That is not right!  After morphing into evil Russell, Mr. Bad has a vision of a red-haired girl somehow connected to Pete and Horse.  Beverly has red hair, people!  Noooooo!

Yet another strange/all-knowing supporting character (in the form of that guy from Dances With Wolves and Maverick) tells Pete that Beverly and Horse are intricate parts of his destiny to perform a miracle, but “Chaos” has agents too.  Just as that information is revealed, Mr. Bad locates Beverly.

Pete and Horse are there to save the day!  There’s an excellent chase scene through the park…

and Horse turns into a PEGASUS!  #yass

At this point I am going to stop summarizing the movie.  There are so many plot twists and turns that I do not want to ruin the crazy surprise!  I will say three things, though…

(2) This movie has astoundingly beautiful scenery.

(3) The plot is heartachingly romantic.  Pete at one point says, “I desire her and I am moved by love.”  May I have an ermahgerd with my swoon please?

Rotten Tomatoes gave this flick a rotten 13%, but I do not care.  It is a slow-moving, cliche-filled, overtly romantic story and as such should not be criticized for plot holes the size of the Grand Canyon.  Yes, Beverly and Pete fall in love instantly.  Yes, they use said love to overcame all obstacles.  Yes, a character travels through time, there are glowing gemstones, and a Pegasus.  Yes, it is a fairy tale!

The acting was excellent.  In particular, I loved lesser known Jessica Brown Findlay who played the ethereal Beverly.  Another shining star was 17-year-old Andalusian stallion, Listo, who starred as Horse.  The infamous Rex Peterson and Cari Swanson of Swanson Peterson Productions coordinated all the horses, riding, and carriage driving scenes for the film.  In an interview with Equus, Swanson stated, “One of the most dramatic scenes in the film is when Athansor (Horse) is trapped in a net under the Brooklyn Bridge.  Rex trained the horses to lay down and roll up under the net to convince the audience of a struggle to survive.” 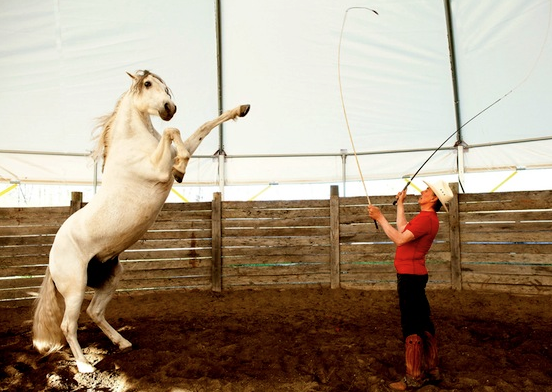 Overall, this movie was a little slow but a lotta magical.  Lovers of the TV series Once Upon A Time and the movie Stardust will enjoy this flick.  It is rated PG-13 and I think that’s accurate.  My 6-year-old daughter loved Pegasus but was bored to tears with the romance.  She also had to cover her eyes during an …ahem… love scene.  I give Winter’s Tale 3 Golden Horseshoes.