They’re both soooo good, but which one deserves the title of Best Eventing Movie Ever? Amanda Ronan referees a showdown.

The Rolex! The Rolex! The Rolex!  No, seriously, the Rolex is happening right. now.  There are two movies that embody the spirit of eventing, Sylvester and International Velvet.  Let’s break the films down and see who would reign victorious in my fantasyland competition. 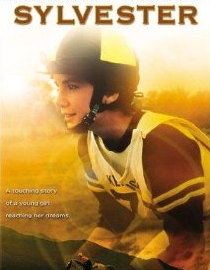 “Charlie is a 16-year-old orphan struggling to raise her two younger brothers when she endeavors to train a wild horse she names Sylvester and turn him into an Olympic jumping champion.” – IMDb 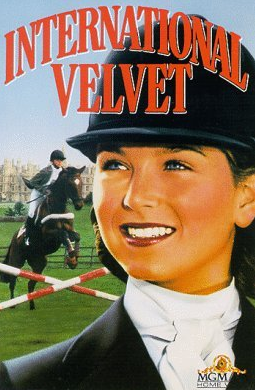 “Velvet’s orphaned niece, Sara, follows her dream of Olympic glory with her horse Arizona Pie.” – IMDb.  This is a very vague sequel to the infamous National Velvet. 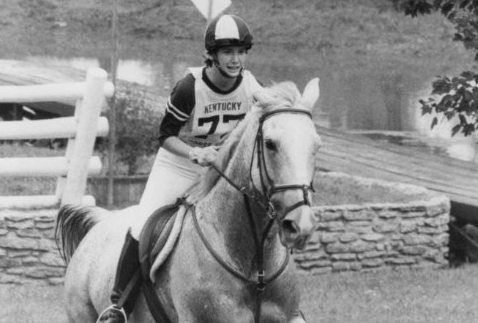 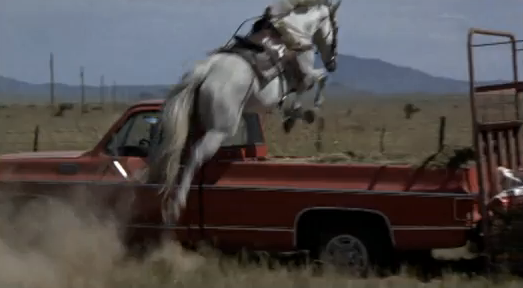 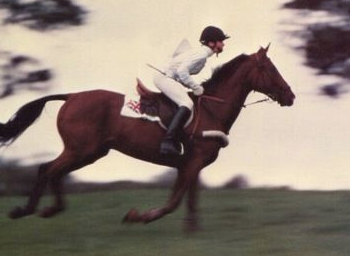 I love Pie, but I can’t help but root for the underdog Sylvester.  I mean, he works at a stockyard on his off days?!?  Plus he’s played by real-life eventing legend The Gray Goose.  You can’t beat that. 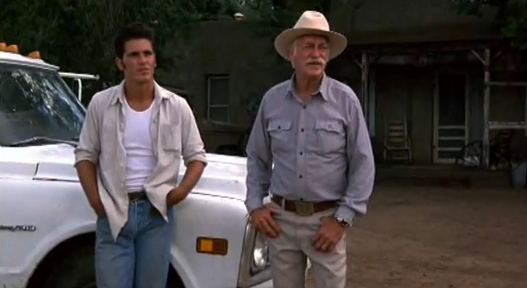 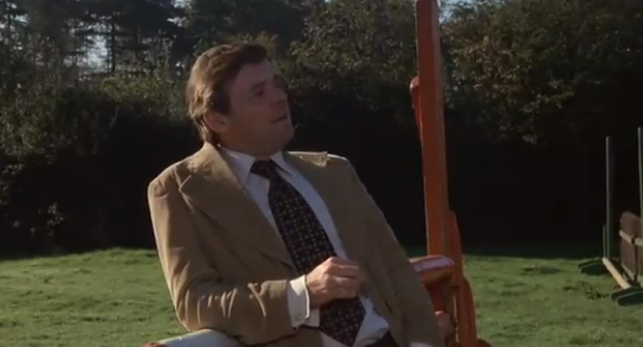 Charlie and Sylvester have nil.  They head to the Kentucky Horse Park after practicing over tires and furniture…not all that successfully. 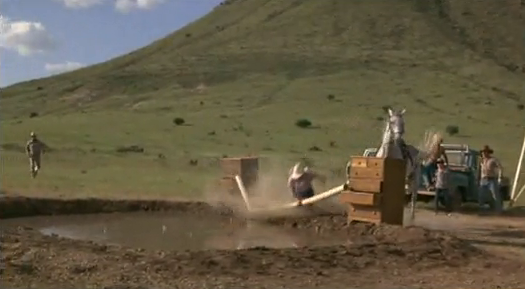 Sara and Pie have competed internationally, including Badminton, and were members of the British Olympic team. 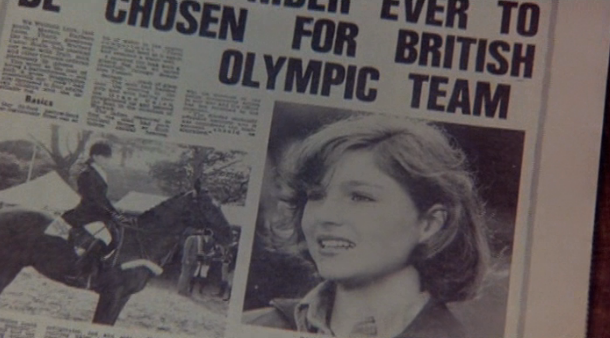 Charlie and Sylvester have truckloads.  This girl has a “take no prisoners” attitude that drives everyone crazy and makes them proud all at the same time.

Sylvester is the same.  He randomly free jumps objects anytime he needs to escape danger! 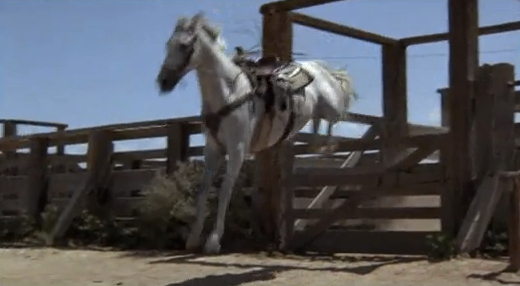 Let’s take one more look at the truck jump. 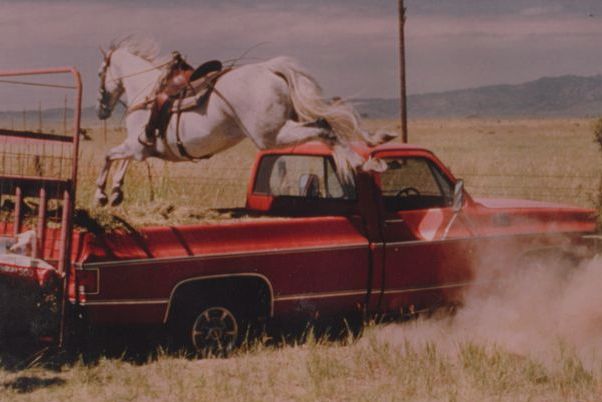 Charlie and Sylvester win the ‘G & G’ category by a landslide.

Other than taking on their Hannibal Lecter trainer, Sara is seriously lacking here.  Not only does she not turn around and face the Mini Cooper bullies, but the girl whines about everything!  One second she’s whining about needing a new saddle and the next she’s whining about how her aunt and uncle pay for that saddle (Spoiler: Her uncle writes erotica novels).  She may have got them riding skillz but she needs to work on her attitude.

So statistically they are dead even.  Now on to the competition…

Charlie and Sylvester score a 51 on their dressage test.  Amazing, since it was their first dressage test ever! 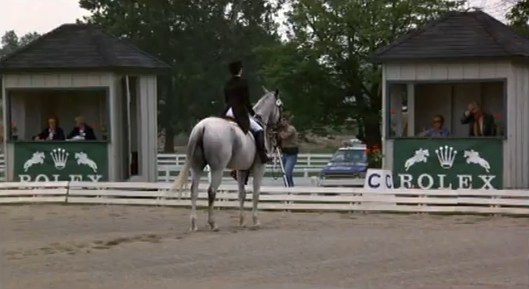 We are told that Sara and Pie are “well up in the middle of the order” after their go.  Perhaps the announcer was just as confused as we were because of the cameraman’s total lack of skill.  See that reddish-brown dot in the arena?  Yep, that’s the horse and rider competing. 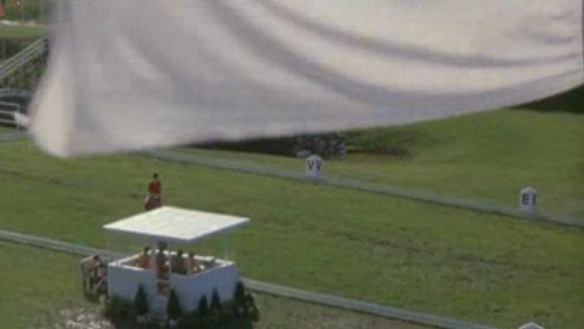 Charlie and Sylvester accrue 2 time penalties in the Steeplechase round but go clear XC!  Putting them at a score of 53. 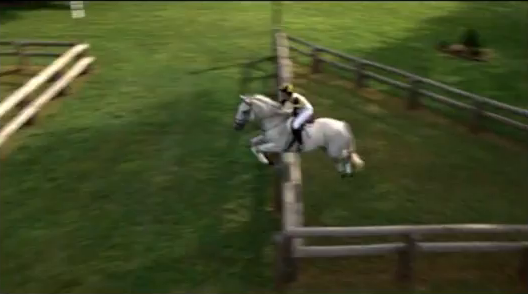 Sara and Pie are looking good…oh no!  Sara is down!  Fortunately for her, her movie was set before the One Fall Rule.  She eventually finishes the course although she sustains a badly injured arm.  So I guess that leaves her at +20 on her Dressage score of “well up in the middle of the order.” 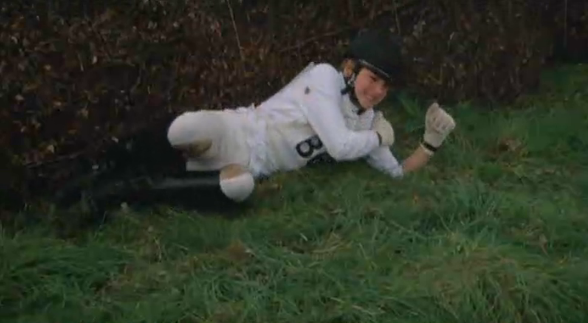 As usual, it all comes down to showjumping day.

Who will reign victorious Horse Nation?  Will it be the pedigreed pair or the underdog first-timers? 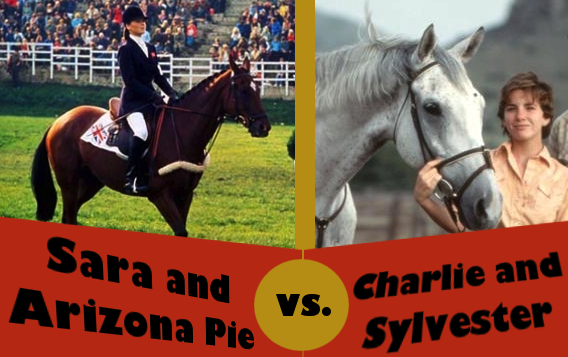 For full reviews on both these movies look HERE and HERE.