One of the most iconic names in TV horses has to be “Trigger,” best friend and partner against crime of Roy Rogers. The palomino stallion was actually born Golden Cloud on a San Diego ranch, in either 1932 or 1934, out of a Thoroughbred stallion and grade mare. He was then sold to Hudkins Stables located in Hollywood, whose main business was renting out horses to the movie industry.

Golden Cloud’s first job in the movies was as a mount for Olivia de Havilland for her role as Maid Marian in the 1938 movie The Adventures of Robin Hood. 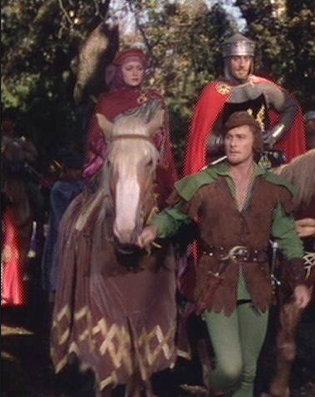 As Golden Cloud wrapped up his first movie, a young singing cowboy was just beginning his. Roy Rogers, who recently changed his name from Leonard Slye, was cast in the “B” grade western, Under Western Stars, and was on the lookout for a good horse.

“When Roy Rogers rode Golden Cloud for the first time it was love at first ride. The horse had speed and power, an easy lope, and a calm and willing attitude. The young actor remembered that after he rode Golden Cloud he never even considered any of the other horses. One day after Roy had chosen Golden Cloud he was on the set of Under Western Stars practicing his quick-draw when the character actor Smiley Burnette, who played Roy’s sidekick in the movie, commented, ‘Roy, as quick as that horse of yours is, you ought to call him Trigger.’ Roy liked the suggestion and began calling Golden Cloud by his new name of Trigger from then on.” 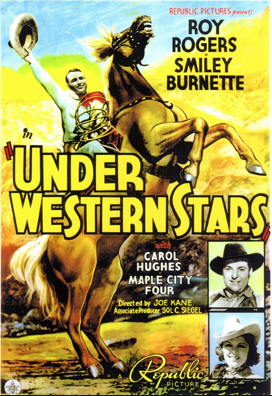 Roy Rogers was smitten.  He loved Trigger and knew that at least part of his newfound fame came from his equine partner. He hoped to buy the horse, but on his $75 weekly salary from Republic Pictures, it seemed like an impossibility. Nonetheless, Hudkins Stables offered to sell Trigger for $2,500 (roughly $30,000 today). Rogers signed on the dotted line and after several years of small payments, Trigger came home.

Trigger appeared in 88 movies with Roy Rogers and all 100 episodes of The Roy Rogers Show, which aired on NBC from 1951 – 1957, not to mention made countless personal appearances including visiting children in hospitals and shelters. 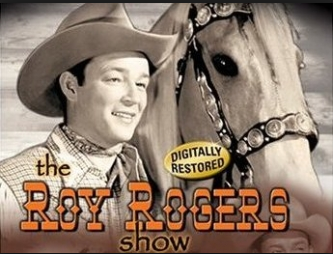 Trigger retired from show business in 1957.  He was sent to a stable near the Rogers’ family home, living well into his 30s before passing away peacefully in 1965. Bischoff’s Taxidermy mounted Trigger’s hide over a plaster likeness in a rearing position, a famous pose recognizable to Roy Rogers and Trigger fans everywhere. Sadly in 1967, it was discovered that Trigger’s horseflesh was sold to unscrupulous southwest eateries by butcher John L. Jones. Jones was sentenced to five years in prison… and the hatred of small children for the rest of his life.

The mounted Trigger was first put on display at the Roy Rogers-Dale Evans Museum. The entire museum, including Trigger, was relocated to nearby Victorville, Calif., in 1976. After Roy’s death in 1998 the museum was moved in 2003 to Branson, Mo.  The museum closed on December 12, 2009. Its contents were sent to public auction in 2010 at Christie’s auction house, where Trigger’s preserved remains sold for $266,500 to television channel RFD-TV.

write an essay for me 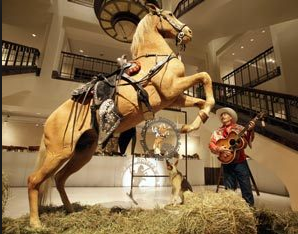 Trigger in Museum via Google Images

But that’s not quite the end of the story… because there was more than one Trigger.

Little Trigger, a grade palomino of unknown origins, was used extensively for personal appearances and publicity tours during the 1940s and 1950s. The horse also was a stunt double for the original Trigger in several movies.  You can spot Little Trigger by his four white socks. 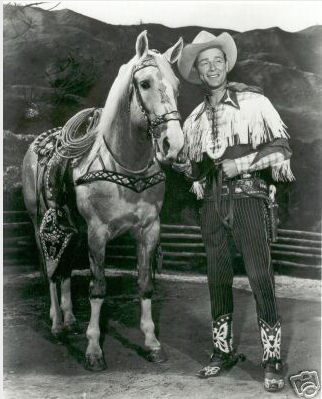 The third confirmed “Trigger” was a Tennessee Walking Horse born Allen’s Gold Zephyr, sired by Barker’s Moonbeam out of the dam Fisher’s Gray Maud in 1941. The original registration was later canceled and the palomino was re-registered Trigger Jr. by Roy Rogers of Hollywood, Calif. Trigger Jr. began immediate work as the original Trigger’s understudy. The defining characteristic between TJ, OT, and LT (I know this is getting redundant but bear with me) is that Trigger Jr. has one white sock that extends above the hock on one hind leg. 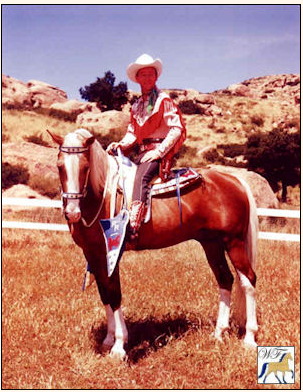 Still confused? Well, if you really want to get down to the nitty gritty of spotting the original Trigger you have to go to the facial markings…

Trigger Jr. was in fact the only Trigger to pass down his namesakes genes, standing at stud at Roy’s Happy Trails Ranch in Oro Grande, Calif. 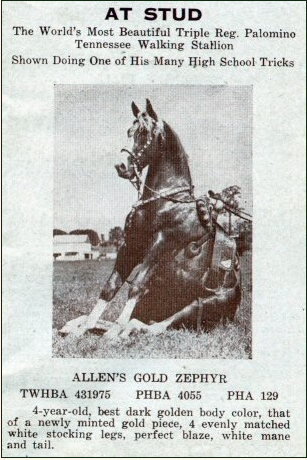 Trigger Jr. passed away in 1969. In October 1993, Roy Rogers auctioned the last of his herd, which included grandsons and granddaughters of Trigger Jr., several of which were registered with TWHBA. His bloodline continues today.