To adults, generally the scariest thing about Halloween is the empty carbs and if you’re like me you’re headed straight for your second sugar coma about now. You’ve already eaten all the good stuff, and now there’s just that weird discount candy with off-brand names to trudge through. If you need something to keep you entertained while you chew, check out these horses in horror… guaranteed to scare you year round.

First up, is the most bizarre horse suicide ever imagined on a water ferry courtesy of The Ring (2002).

What did we learn from this video, hmmm?  How about if you don’t OWN the horse, don’t stick your filthy, cursed hands in the trailer to pet the horse!

Next up, is the hit AMC TV series The Walking Dead (2010).  The opening scene from Season 1 has become almost iconic for the show and is definitely one of my top 10 grossest scenes ever filmed. Ewww…. 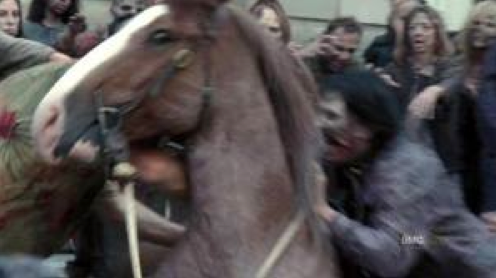 Not to worry, though.  No horses were actually harmed in the making of that scene.  Those zombies were just chomping away at special effects red jello and who knows what else while the Sheriff and the horse rested a spell. 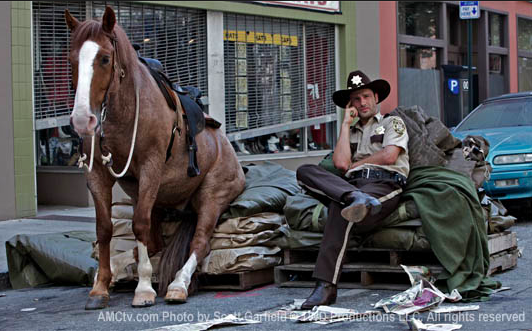 One of the scenes that I will always personally cringe at is from J.Lo’s The Cell (2000).

I mean, that just is wrong.  The organs are still working?!?  What the…

Horses are often used in dream sequences in horror movies but in the 1977 movie Equus, those dreams become nightmares. I reviewed Equus not long ago and declared it one of the most bizarre movies I have ever watched.  So if you go down that road, don’t say I didn’t warn you!