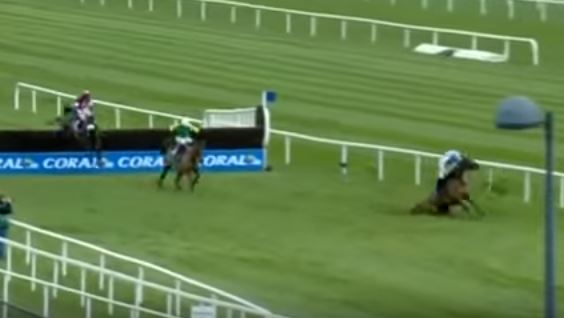 Spectra VET Performance of the Week: Steeplechase Save

You know it’s good when the announcer says “He’ll never recover from that!” AND THEN HE DOES.

Seven-year-old Killultagh Vic was the 2-7 favorite for Sunday’s Grade 2 Novice steeplechase at Leopardstown on the Emerald Isle and was plucking along just fine at the front of the pack… until total disaster struck.

The horse’s striding, takeoff, and form were perfect to the final fence and had seemingly cleared the way for victory when his front feet when completely out from under him, and the horse was suddenly splayed out on the turf like a bear rug on the cabin floor.

Veteran jockey Ruby Walsh managed to remain completely centered over the horse throughout the chaos, which in horse racing time seems to last an eternity, but the ferociously competitive pair returned to their feet and dug in.

Walsh never regained his right stirrup, and finishes the race still in jockey form using one stirrup and pure muscle alone. Oh, did I say finish? I meant WIN.

Despite getting passed by two solid competitors, Killultagh Vic manages to overtake horses Blair Perrone and Lord Scoundrel  in just a matter of a few hundred yards to win by 3/4 of a length. Some are calling it one of the most miraculous comebacks in horse racing history, and they may be right.

“It was a good performance to get back up and win, wasn’t it?” Walsh told The Irish Times. “He’s got some turn of foot, and that’s with me flapping up and down on him.”

In other words, in addition to Walsh being one of Ireland’s most legendary riders, he also made one of history’s best recoveries, and did it with an obscene amount of modesty. And in case you’re wondering, I’m sorry to say he’s sadly not on the most eligible bachelor’s list, with a wife and three daughters. If you want to learn more about Ruby Walsh, you can follow him on Twitter and check out the three part YouTube series on him here. Killultagh Vic will get some rest in preparation for Cheltenham’s JLT Chase in March, where he’s currently the 4-1 favorite.