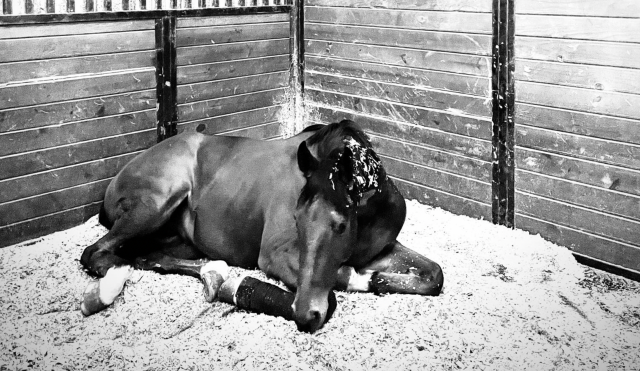 This week’s Thoroughbred Logic is the first part of a series on injury rehab. Today’s article takes a look at the options when it comes to post-injury confinement.

Welcome to the next installment of Thoroughbred Logic. In this weekly series, Anthropologist and trainer Aubrey Graham, of Kivu Sport Horses, offers insight and training experience when it comes to working with Thoroughbreds (although much will apply to all breeds). This week, come along for the ride as Aubrey discusses various options when it comes to containing a horse post-injury.

Last week, a video went viral of Fred Scala quietly sitting all the bucks and naughtiness on Donald (an alternate for the Tokyo Olympics) as his team brought him back to work after an injury. Fred’s riding is exceptional, and man, I wish I had his seat. The more interesting part, though, were the comments. You could tell who has rehabbed a horse before and who simply imagines that horses must gently shoot rainbows out their rear-end all day and that clearly all of the “bad” (really just terrifyingly exuberant) behavior was in fact something that Fred was causing. Try again, Karen.

If you have not had to single-handedly bring a horse — let alone an upper-level athlete, or multiple young, fresh, off-track Thoroughbreds — back from a stall-rested injury, I truly hope that you never have to. If you have had to, the things I’m mentioning will likely sound terrifically familiar.

Last Friday, I had been given the go-ahead to “tack walk” Needles (Needles Highway). While an essential part of the process, this is never one that I look forward to. Dread might actually be a more accurate description of how I feel about the effort to simply walk while mounted on a 1200-lb lit keg of dynamite. 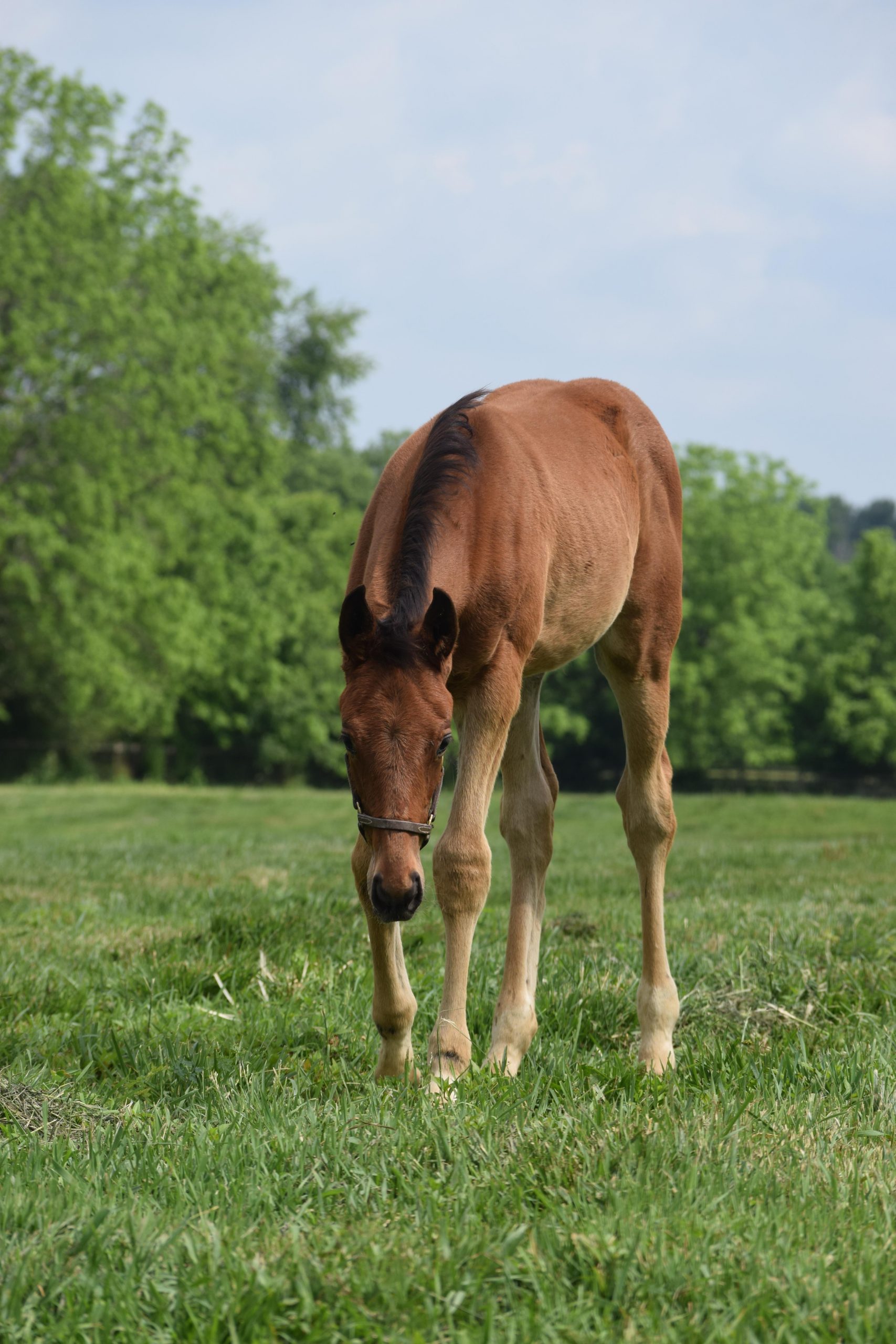 Needles is arguably the fanciest Thoroughbred I have owned. To that point, I did what I could to lay claim to him when he was a yearling after watching his uphill trot float across the pasture at Winchester Place Thoroughbreds. After retiring from his too-slow-never-made-it-to-the-track “race career,” he came here and got started under saddle.

Then, as sometimes happens in big turnout, he got kicked. The bone sequestered, sending bits of dead material up through the skin and Needles went in for the needed surgery because I love to pretend I actually have money. Fortunately, the relatively simple procedure went well and he then spent six weeks in his stall healing from his incisions and letting the bone calm down. 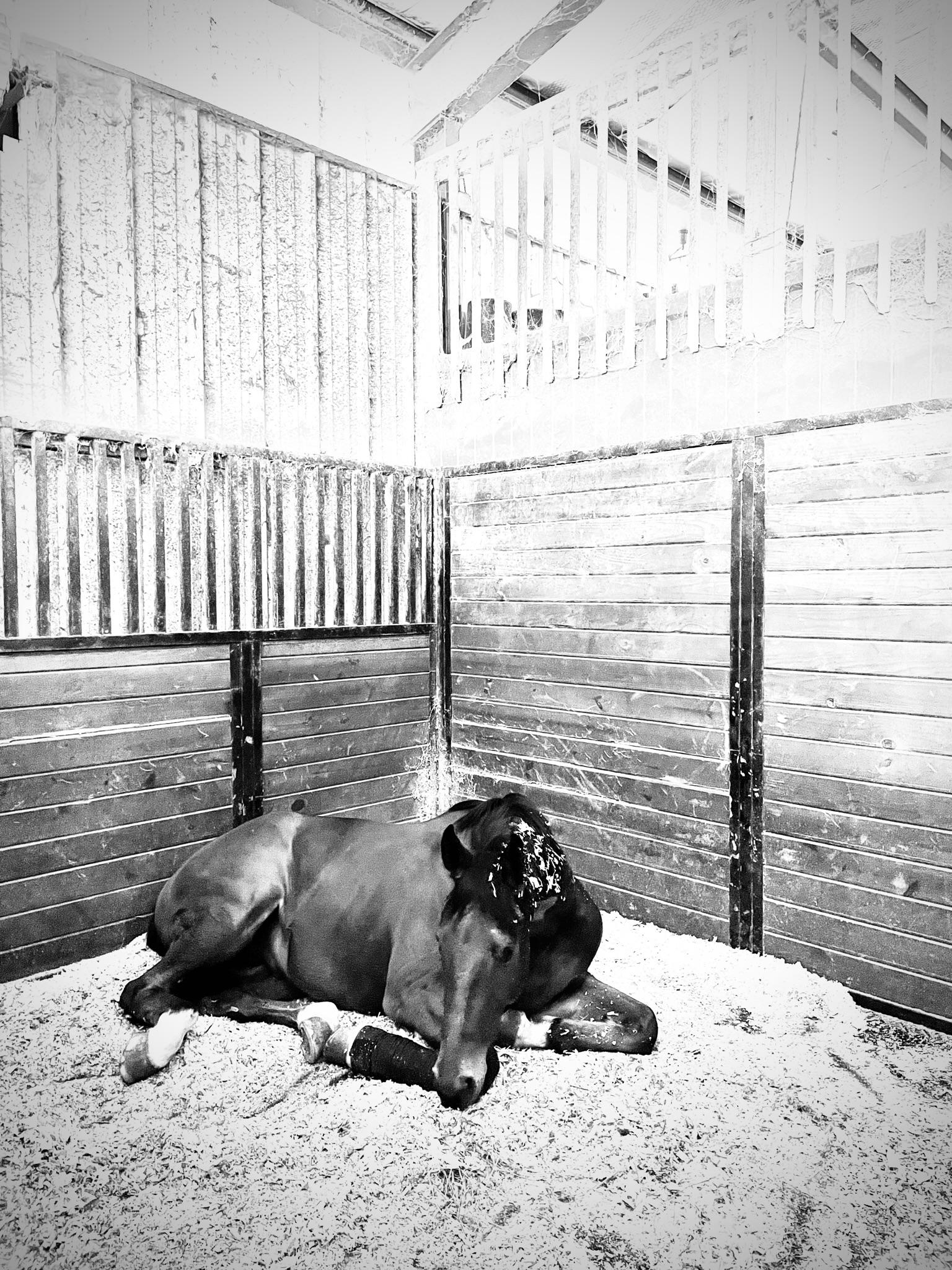 Just-turned-four-year-old Needles has largely been a good kiddo in his confinement… though that might depend on who you ask — he drives my barn help absolutely batty. So having received the “go tack walk” instructions from my vets last week, I decided yesterday was the day: I tried to gauge how feisty he was feeling. We walked to the cross ties to groom and tack up. He nearly fell asleep. Walked down to the arena and he was still his usually good-boy self. Walked to the mounting block and scraped off my boots…

And he exploded. Up. Forward. Double barrel kicking. Rear and strike. Wide eyed. BOLT. I categorically refuse to let him go, so the 10… 30… who knows or so… seconds of chaos are spent dodging flying feet and hoping my recently separated shoulder will hold as I try to convince him that all four feet are better off closer to the ground. He did finally stop. Pat the pony. Don’t get on (I’m not going to be able to ‘just walk’). Go back to the barn and take the fact that neither of us got actually hurt as a total win. Call my vet and see what other options we have (we’ll get into those next week). Ooooof. 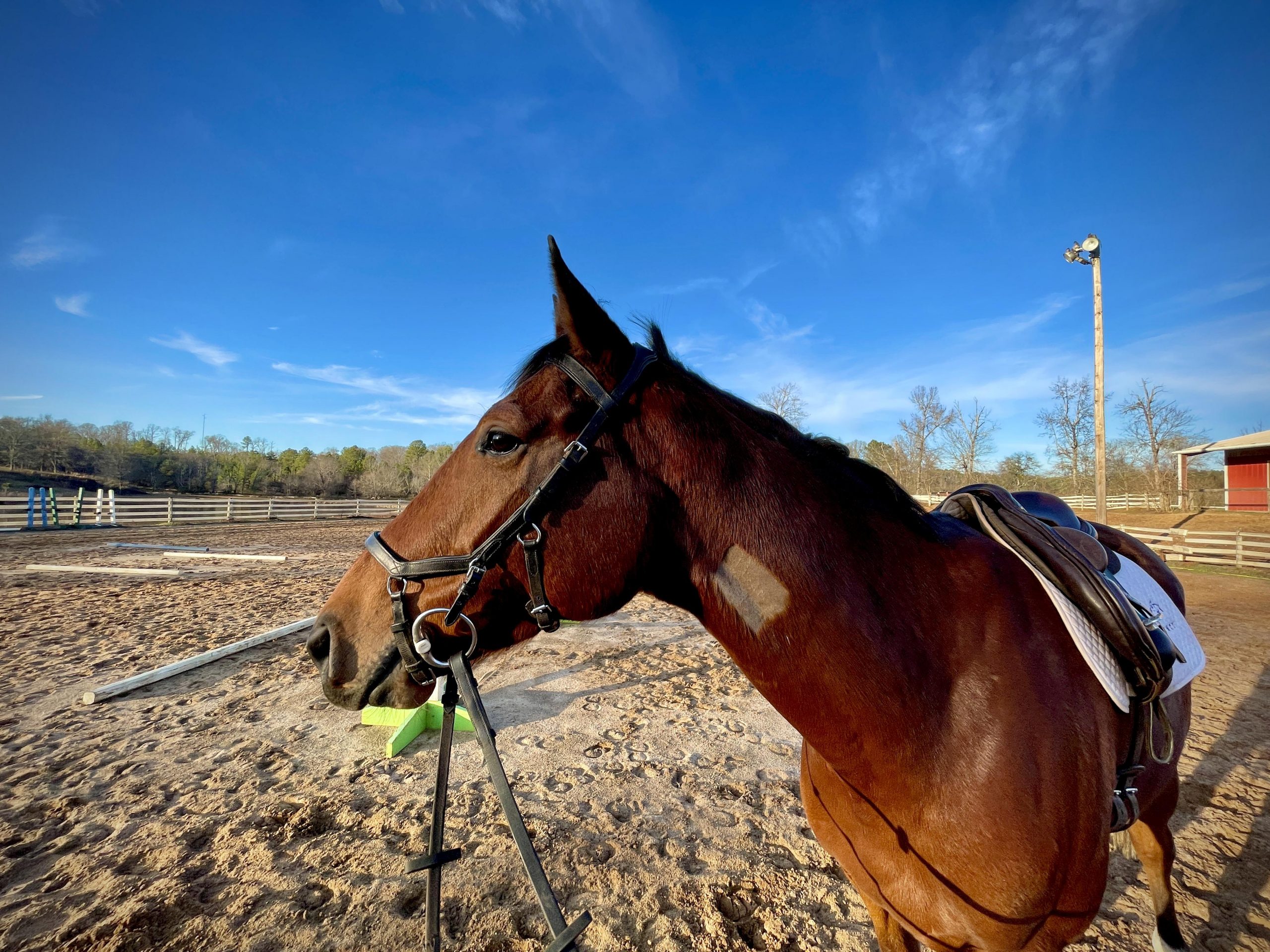 Needles Highway looked pseudo composed for his first effort at a tack walk yesterday. He was, in fact, lying. Photo by author.

So due to Needles and Fred, I’m thinking about rehabs and all the steps from the injury to going back to work. In this multiple part series, I’ll work from the general options to the stall and then back out into training. So, for now, the general:

Most major injuries (in addition to post-operative situations) require some form of confinement once one has done all the proper rigamarole with the vet (rads, ultrasounds, topical treatments, etc.). I generally lean towards stall rest, due to the shape and condition of my paddocks (large, often slick, and hilly). That said, there are sometimes options: kick them out in the field, confine or reduce turnout, or bring them in. Let me parse these for a minute.

There exists what some call the “Australian method” for healing serious leg injuries, which largely means tossing them out in a turnout and ignoring the injury (beyond its immediate needs) for as long as it takes to heal. (Sorry, Australians, I’m not sure how you all earned this moniker… though maybe this might happen out on the ‘range’??? But yes, I also know that you all stall rest your performance horses too…). 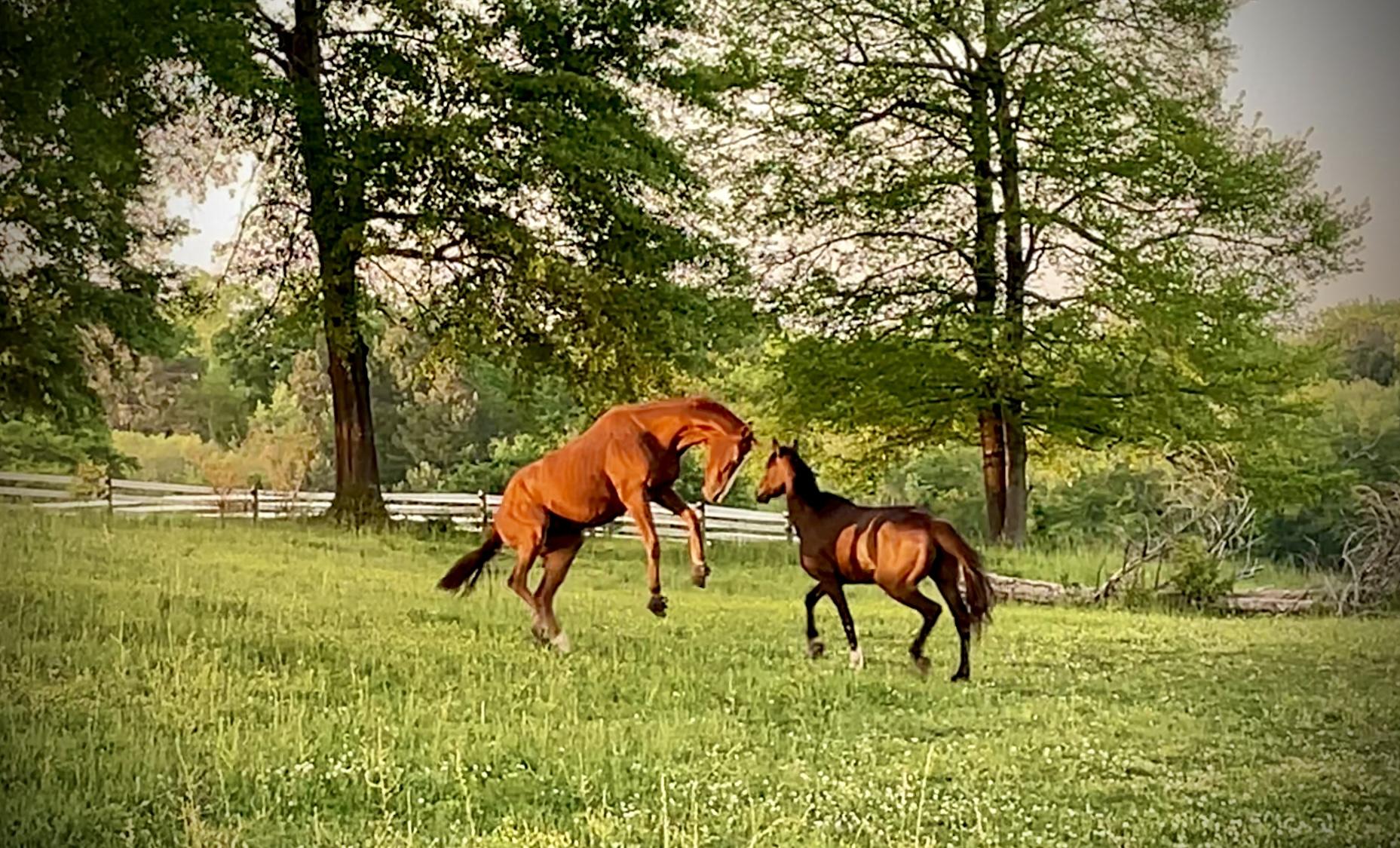 Beans (Giant’s Gateway) and Aspen (Aspenfiveoneseven) goofing around in the big field. Photo by author.

There’s a catch to the “Australian” method though — horses’ bodies will “patch” their injuries in the most efficient manner needed. My vet explained it like this: “If they need to run from a predator, their bodies don’t care if the patch is all willy nilly and causes one leg to move at a different/slightly ‘off’ gait from the others. They can still run. To heal things correctly (where all tissue fills in with the correct direction and elasticity is preserved), it is necessary to give the body time to heal it correctly.” For the performance horse with a future career, this often means veterinary interventions, keeping a leg wrapped and seriously reduced turnout or the stall.

I have a friend who rehabbed her horse’s major suspensory issues with “stall-like turnout,” aka four round pen panels connected into a stall moved around the flat ground at her farm. Technically, the confinement fit the stall description, but the horse still got to graze, see others and be a horse. This is honestly pretty ideal, but I have never managed to make it work here (hills, mud, and horses that are too hot to remain quietly within four panels when they can see friends and open fields). And yes, to state the obvious, when wrapped and resting, remaining QUIET is essential. 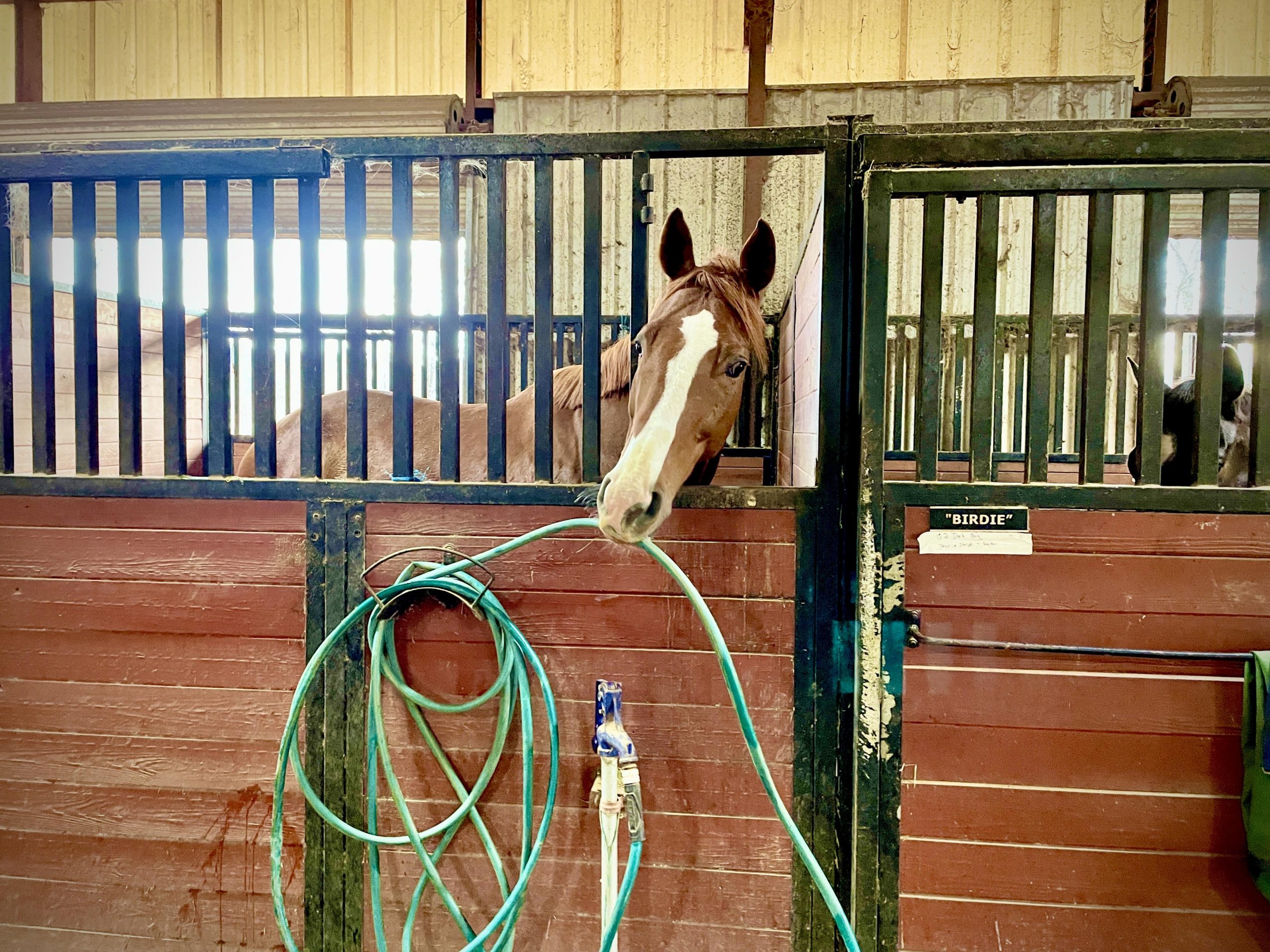 Then there is that proverbial 12×12 room that hopefully has a view.

Like humans, some horses do better than others when confined to a box. They will all get a tad sassy of course, but Thoroughbreds run the gamut between say, Crafty (Crafty Charger) and Forrest (Don’t Noc It). Crafty, while a total wild child under saddle, was damn-near angelic in his stall. He was rehabbing a stress fractured cannon bone, so was allowed minimal movement outside of his box for about five months. Besides the occasional circus pony move, he soaked up the attention, walked on a loose lead to the cross-ties and hand-grazed like a pro. 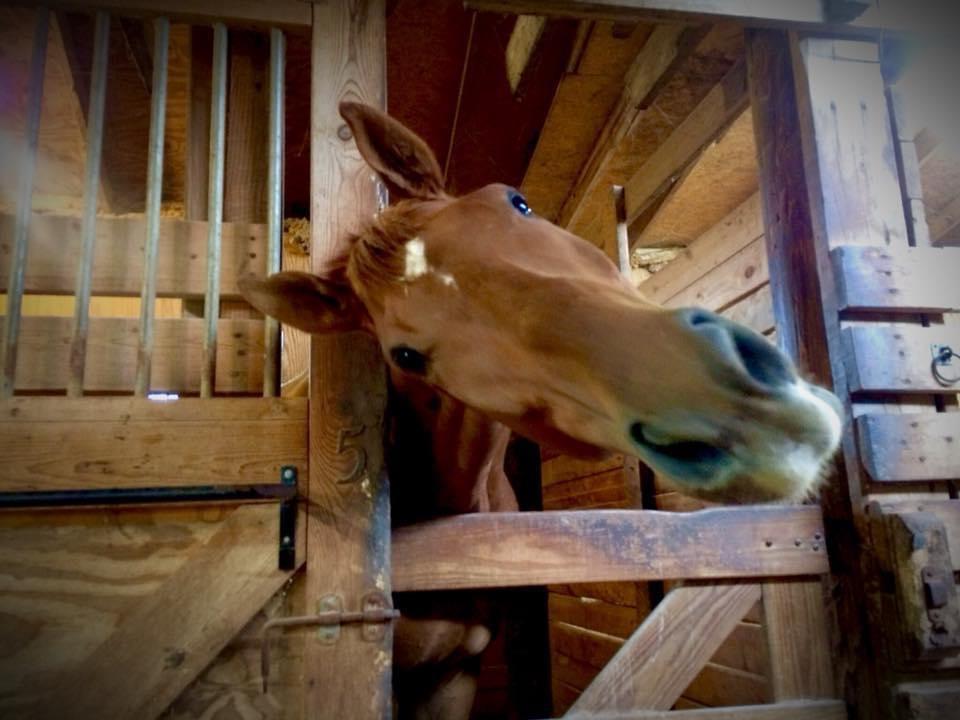 Forrest and his I’m-trapped-in-here-crazy-eyes at our former boarding barn, going into his third week of stall rest. Photo by author.

Forrest, on the other hand, has thankfully only been confined ever for a max of two to three weeks at a time for various idiotic pasture injuries. Those weeks, however, came with all kinds of exuberant antics, nearly hanging his front legs over his stall walls, blasting out the door anytime he went to get groomed, dropping his shoulder into you and attempting to bolt…in general, his feet never really stayed near the ground. When I left town for half-a-week, I ended up having to move him into my vet’s care. It wasn’t worth risking the life and limb of the then-boarding-barn’s help…

In the next installment of this series on rehabbing, I’ll take a closer look at some tricks and tips that help you and your horse survive the stall rest option a tad more comfortably. In the meantime, the spoiler alert is that both Crafty and Forrest are happily jumping around like they never needed to be rested, and there is a new and improved vet-approved plan to get Needles back to work. Check back for more soon. 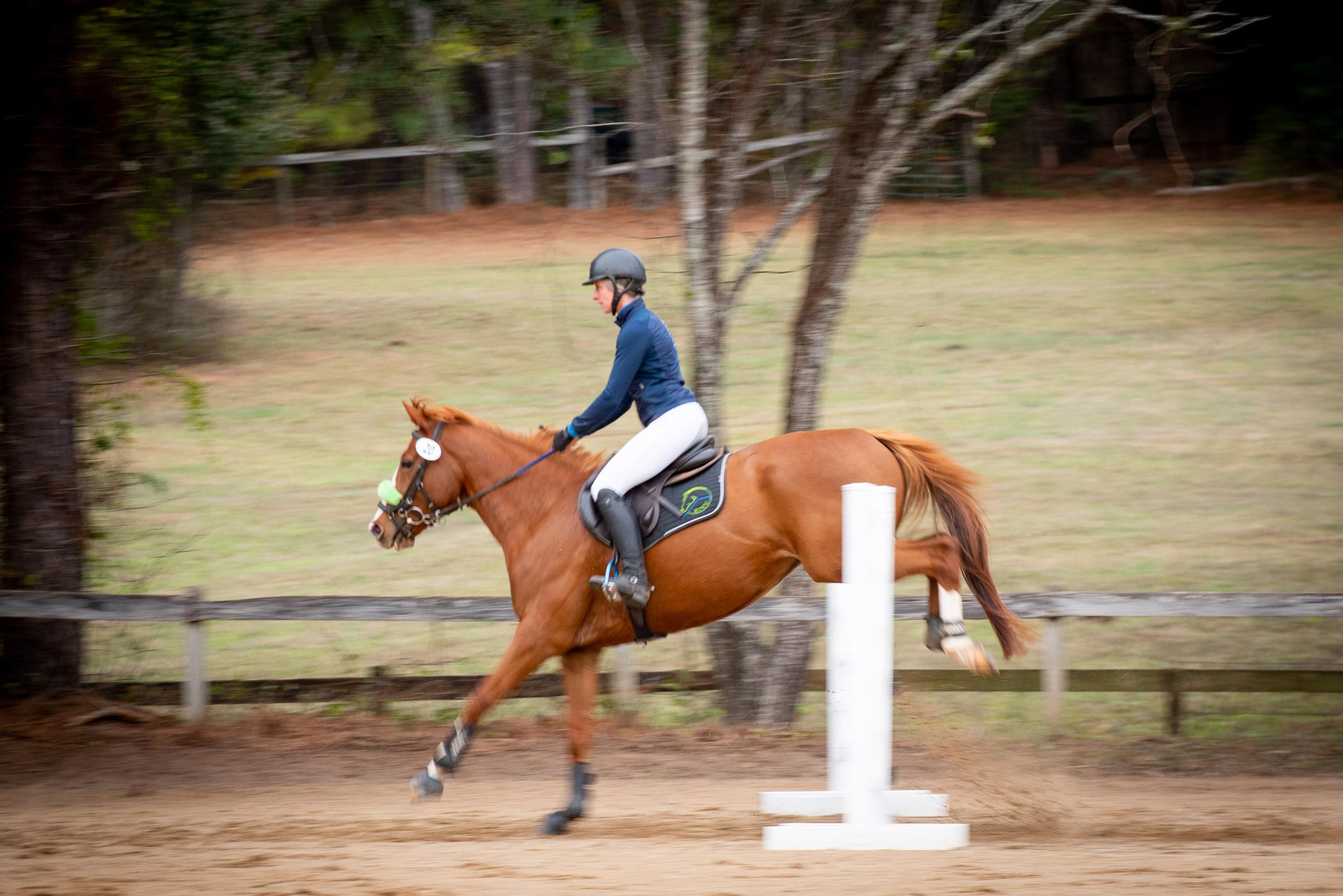 Craft Charger popping around his first show back post-broken leg. His rehab was successful and he’s fully back at it, antics and all. Photo by Amanda Woomer.