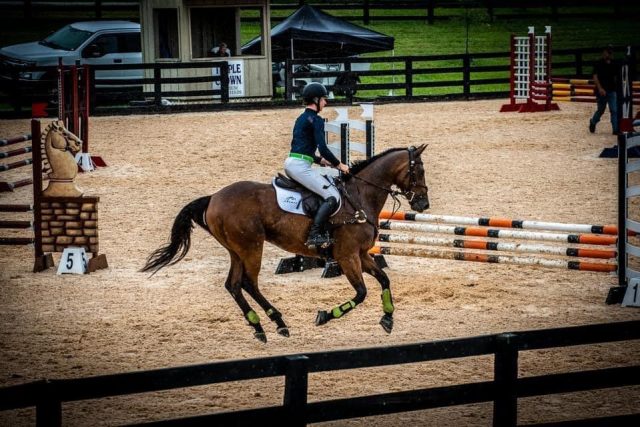 “[T]he biggest determining factor of getting around a course successfully is having the horse in front of the leg, and thereby having the quality of canter to indeed tackle all of the obstacles with both power and balance.”

Welcome to the next installment of Thoroughbred Logic. In this weekly series, Anthropologist and trainer Aubrey Graham, of Kivu Sport Horses, offers insight and training experience when it comes to working with Thoroughbreds (although much will apply to all breeds). This week, come along for the ride as Aubrey discusses her logic on keeping your horse in front of your leg.

When I watch jump rounds, especially those involving green horses, it is reasonably easy to tell who will get around clear — or close to it. It is not necessarily the perfection of the rider position (though that helps a ton). It is not the height, breed, or condition of the horse (though the latter also is pretty damn important). Nope, the biggest determining factor of getting around a course successfully is having the horse in front of the leg, and thereby having the quality of canter to indeed tackle all of the obstacles with both power and balance. 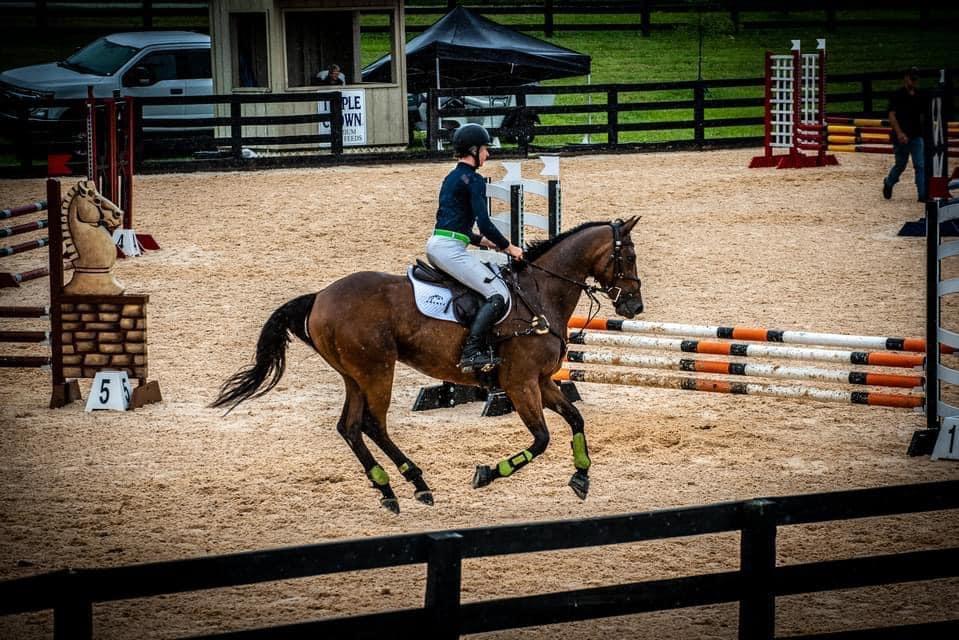 Western Ridge (Rhodie) making easy work of an “in front of the leg” canter. Photo by the Kivu Team

This concept is a tricky one because for the most part, it is a question of feel. And feel is hard to teach. That said, there are probably 182357903 different ways to describe ‘in front of the leg.’ For me, it is when a horse is using their hind end and pushing over their back so that the energy flows past the saddle and the wither and into the reins.

Ok. Yes, it takes ‘feel’ to recognize it, but the up-side is that one can at least somewhat empirically test this concept. A horse is in ‘front of your leg’ if you half-halt and they indeed sit through their hind end and listen without having to ask twice. They’re equally in front of your leg if you put forward leg on and they open up their stride without having to squeeze or kick again (see note below on uphill vs. downhill speed). If you can do both with good attentiveness and response, your horse is likely successfully in front of your leg (and will have an easier time getting to the good distances). 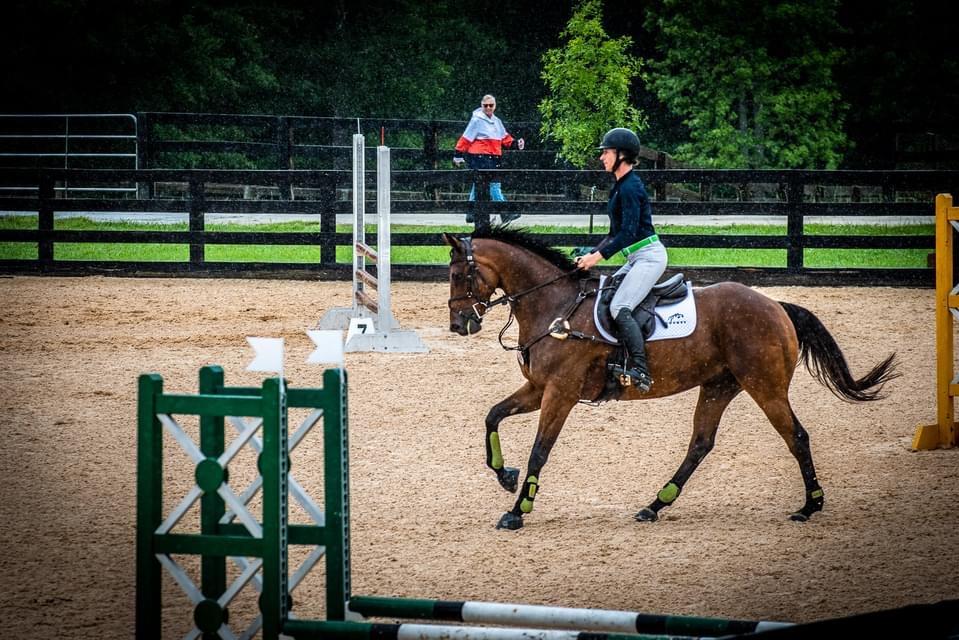 Rhodie mid-way through a half halt at Poplar. Photo by the Kivu Team.

Those tests have now become part of my warmup for stadium and cross country (and as possible in dressage warmup arenas). At the trot and canter, I ready even the greenies by asking them to move forward for a bit and then later half-halt and rock back. Once I have the caliber of trot or canter that I want, then I can pop them over a few fences. And the great thing is, once you have that ‘in front of the leg’ gait, you generally don’t need to jump 45 warmup fences. Four to six quality fences out of the quality gait and you’re good to go in, get the same trot or canter and get around the course.

Rhodie is a helpful example. He can be erratic (to put it nicely), but once he gets in front of my leg, the canter becomes rhythmic. All I need to do is tighten my core and drop my tail bone, and he rocks back and collects, soften my fingers and add calf and he opens up his already deceptively sizable stride. But if I can get and maintain that ‘in front of leg’ canter, the jumps come up easily. If I fail… well… let’s just say the rest of the course might go quite a bit sideways (literally and figuratively). 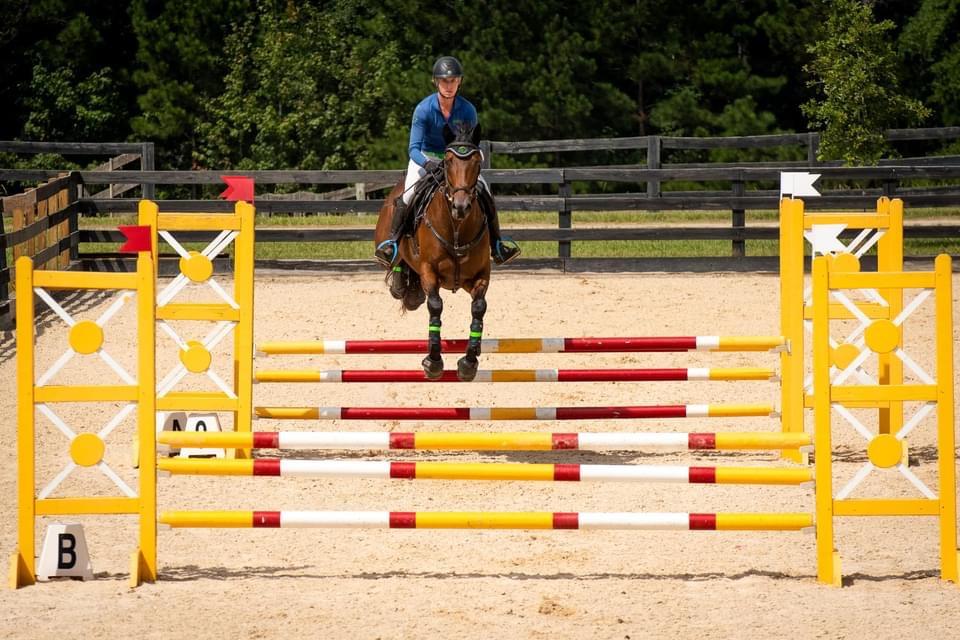 Rhodie using the quality canter on course. Photo by the Kivu Team.

To make this perhaps more complicated, to be in front of the leg, a horse must go forward. This is another lovely vague riding term. Squeeze. Kick. Go. Come on, go forward.

Now, ‘forward’ and ‘fast’ are not the same thing. To make everything just that much more confusing though, forward and fast can act as a Venn Diagram. Forward has an ‘up’ or ‘uphill’ feel from the hind-end. It is often a “sit up, lift the horse from your leg through your core to your hands” feel and if you need a bit more oomph, then kick (or put leg on). Plain-Jane fast can be anything, but it won’t count as ‘forward’ or ‘in front of the leg’ if the horse is downhill or plowing onto their forehand. Flat and fast, or downhill and fast, on a jump course are generally terrifying to watch, let alone ride. You’ll also probably know that’s the case by the collective sharp intake of breaths from onlookers as someone flies around. Perhaps a universal goal for the new year should be to avoid that as best as possible. 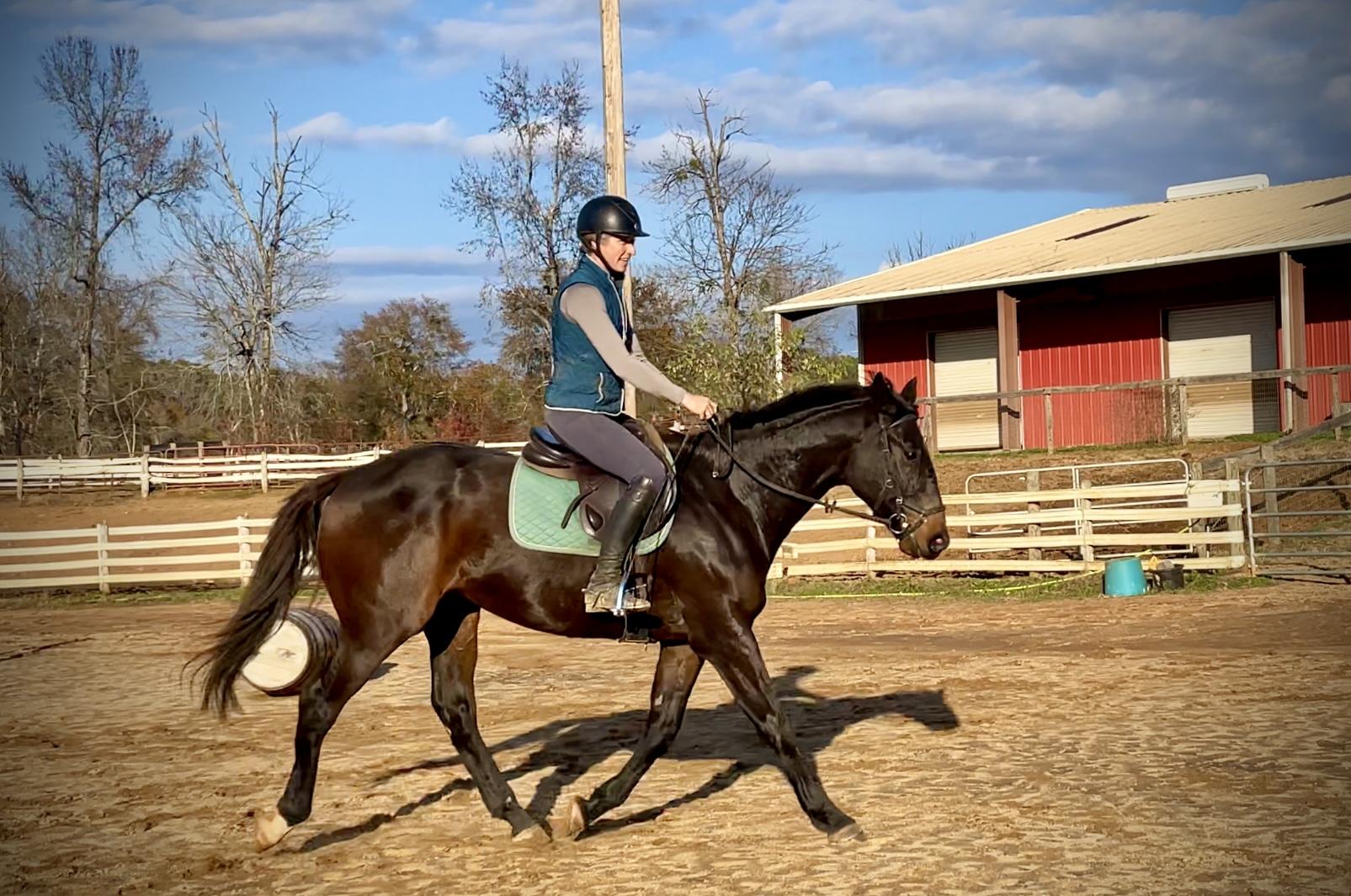 Working to get Madigan Cat to “go forward” and get out in front of my leg (nope, he is not yet there but it gets better each ride). Photo by the Kivu Team.

So this is where it gets even more complicated: Thoroughbreds (or better yet, green Thoroughbreds) + In front of the leg.

When horses naturally possess speed, so many riders want to hold them back. The hands take on a “hold” position and the body braces against them to keep the horse slow and in check. Most of the time, that’s not going to work. One must soften and go forward. Yes, even that green Thoroughbred, who has all the speed and power in the world, must be allowed — and often encouraged — to go a tad faster (but safely and with “up” motion).

And honestly, sometimes forward does mean fast… or at least faster than a rider sometimes thinks is what they want to be doing — especially with a green Thoroughbred. So at the trot, one must keep their hands soft and guiding (not pulling) and ride the horse forward from the hind end into the bridle. This doesn’t mean chasing them, but rather lifting them up and asking them to push from behind and go. For some horses this takes one circle and they are on board with the concept. For others it can take weeks or longer. Once they understand, the impulsion and quality of gait can exist without all the excess momentum. 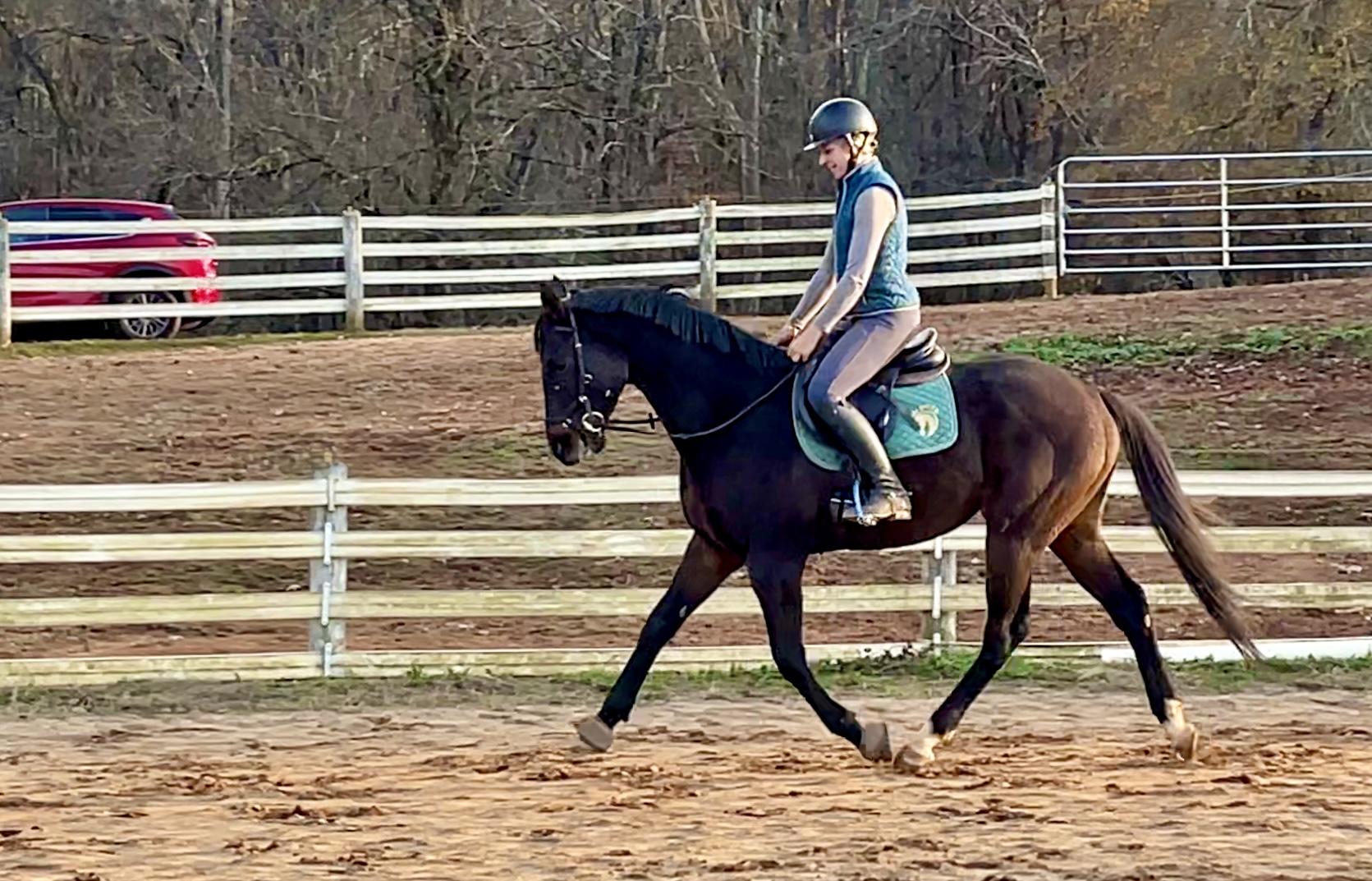 Bayou Gem looks somewhat fancy here on his first post-track ride, but he is still a tad behind my leg. As I pushed a bit further, he first went faster, but then softened and was able to slow and stay in front of my leg. Photo by Alanah Giltmier.

It is worth noting here that being ‘in front of the leg’ and ’round’ are not synonymous. In the process of getting a horse in front of my leg, I don’t care where their head is. That said, as they start to use their back properly and engage their core, their carriage will naturally improve from inverted giraffe to capable, round equine — no fussing with the reins necessary. 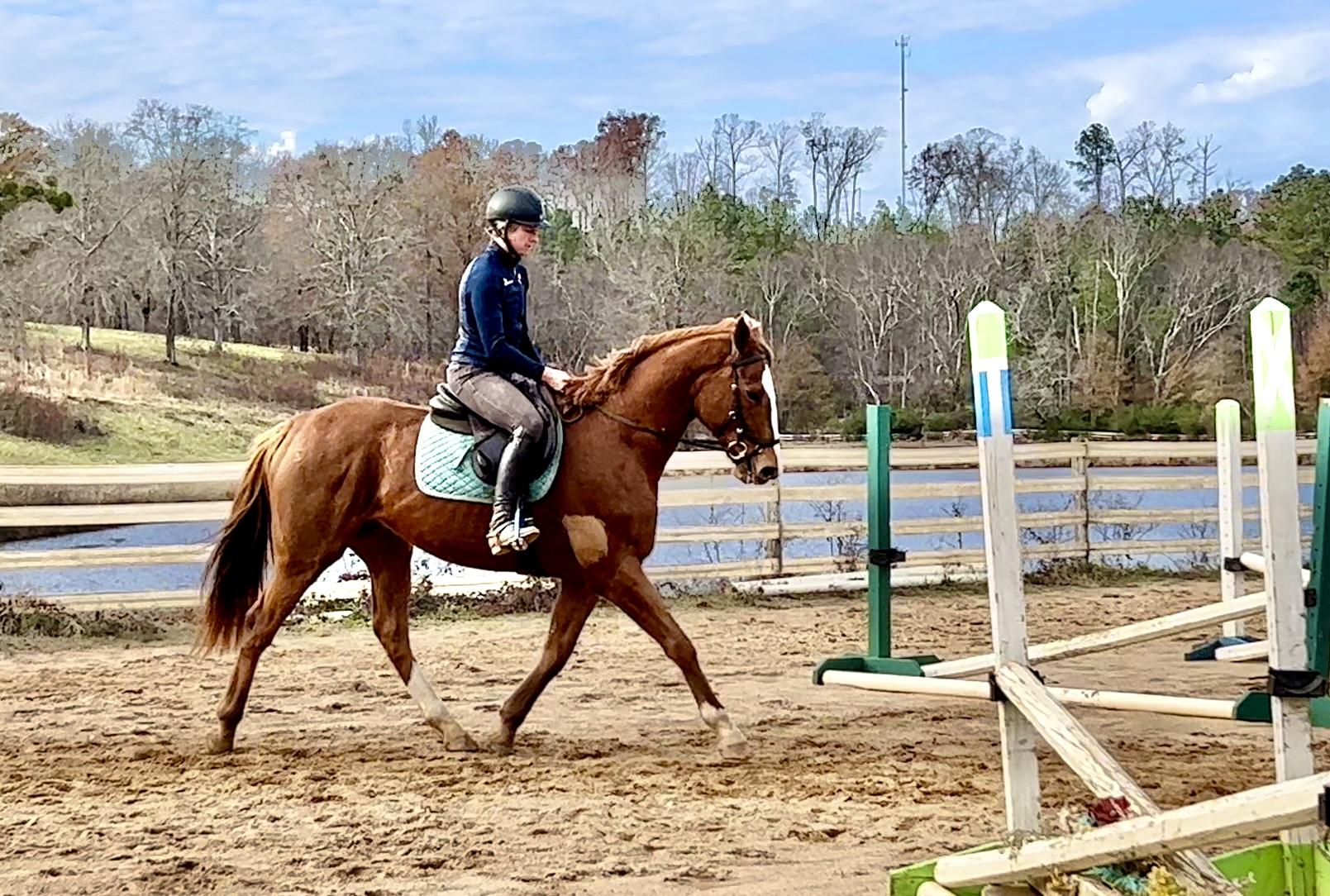 Gumbo (Bayou Prospector) showing off his first attempt at getting in front of my leg during his first post-track ride. Over the next four rides, he has figured it out, improved his gaits and softened into the bit. Photo by the Kivu Team.

Ages ago, I had a young Thoroughbred stallion at the barn. He was sweet and pretty simple, but he was stuck so far behind the leg that the first few rides on him had my barn helpers laughing. At the trot, we just kept going up a gear, and then another, soft hands and a very forward-going trot. He resisted and stayed hollow through his back trying to suck back into a mosey, but forward we went until he sighed, softened, and came over his back and got in front of my leg. From there, we were able to keep the power, balance, and impulsion, but take the comical momentum back a notch (or eight). And the best part — once he learned what I was asking — we no longer had to do the literal run around; the quality of gait was there from the start of each ride. 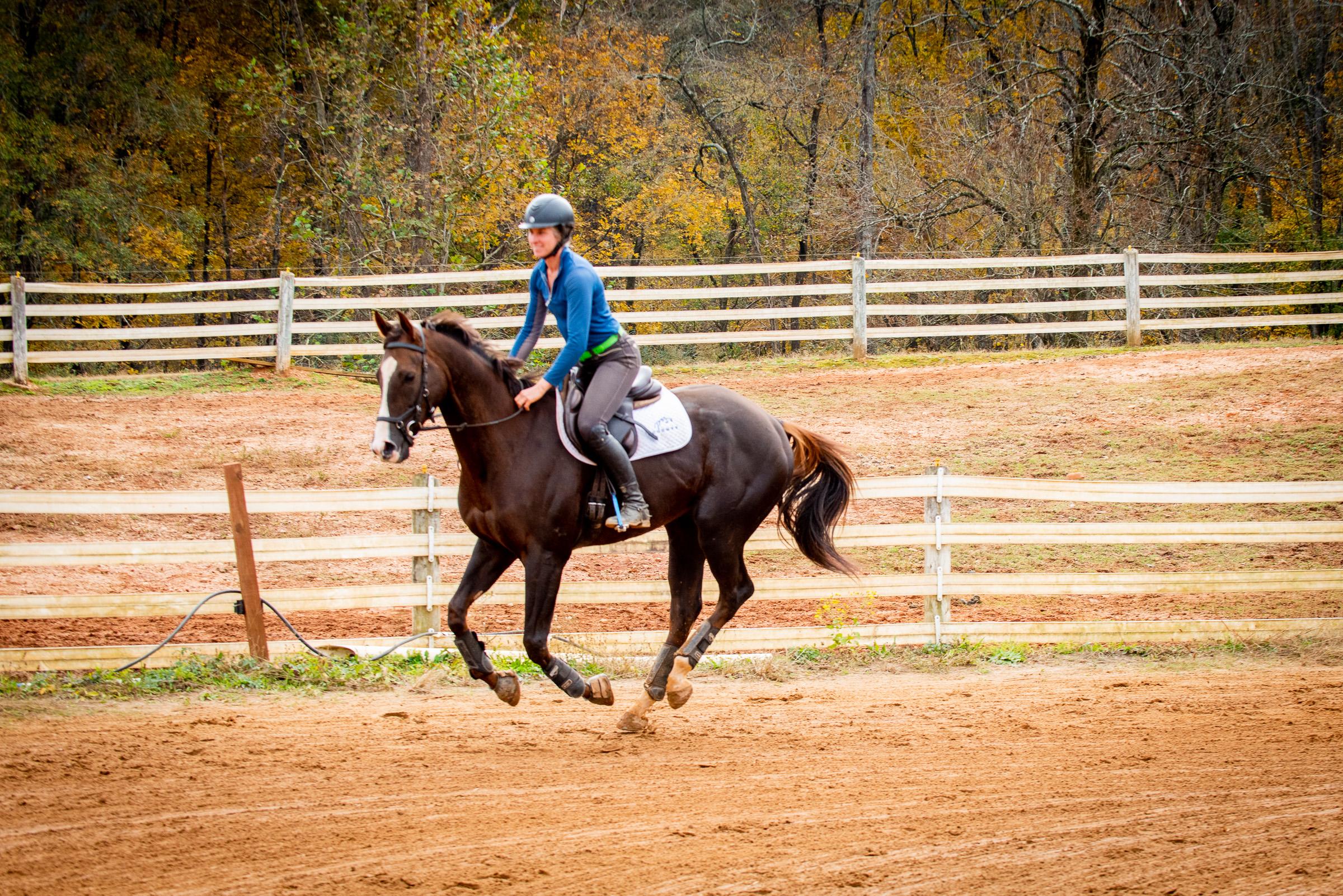 Monk (JC Sydster) has been awesome from the get go about staying uphill and in front of my leg. I’m excited about this kiddo and his future. Photo by Kelly Robison.

So while we head towards and into the new year and I start to leg up all the equine toddlers with an eye to the upcoming show season, the first thing will be to get them solidly in front of my leg. From there, yes, the power might be greater and the speed might be up a notch (at least temporarily), but the ability, strength, balance and control will be so much greater too. And hell, why else ride the Thoroughbred but for that thrill — that balanced power and the heart that is always ready to give more, take it up a notch, and try.

So stay warm, enjoy the holidays, and kick on (in an uphill fashion) as we ride towards the new year.