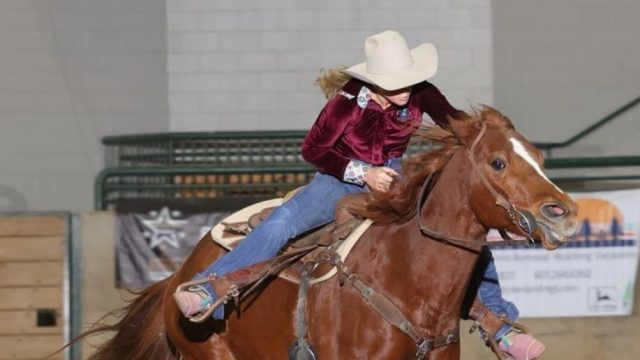 After three days of tough competition, Cambrie DeLaune and VF Leo Stinson won the Average at the Christmas In Dixie. Emma Kate Parr and her off-track Quarter Horse gelding, Pipe Down Compromise, came out on top in the American Qualifier.

The 2022 Christmas In Dixie was held at the Kirk Fordice Equine Center in Jackson, Mississippi this past weekend. The event was produced by Bayou Productions, LLC and sanctioned by Better Barrel Races. It paid out nearly $200,000 over three days.

On Friday, Jamey Hunt of McAlpin, Florida and Brisco County Lion, aka “Cali,” clocked a 13.895 to be the fastest out of 475 riders. Cali is a six-year-old Oklahoma-bred mare by Lions Share of Fame and out of Pikachus, by Brisco County Jr. For the past year-and-a-half, she has been owned by Ashley Hunt and has been ridden by Jamey. This tough-to-beat team were coming off a 4th place in the MVP Derby Aggregate at the OKC Futurity. Jamey was also the second-place rider in the Open 4D on Friday aboard Eddie Stetson, a gelding by Eddie Stinson and out of VF Burrs Alive, by Burrs First Down. He continued to jockey his horses to 1D placings throughout the weekend.

Emma Kate Parr of Greensboro, Alabama and Pipe Down Compromise, aka “Piper,” won the Saturday Open 4D and The American Rodeo Contender Tournament. Piper is a nine-year-old Alabama-bred gelding by No Compromises and out of Wildfire Revenge, by Second Down Kelly. Before becoming a barrel horse, he made three starts on the track and earned $870. His best effort was a third-place finish at Delta Downs in Vinton, Louisiana. In just 14.030 seconds, Emma Kate and Piper banked over $5,760 between the Open 4D, Youth Sidepot, Legendary High Stakes and The American Qualifier. They will automatically advance to the Eastern Region Semi Finals along with the second and third-place finishers, April Black and Chips Native Dunit and Talmadge Green and French Good Bye.

On Sunday, Blaise Bercegeay of Summit, Mississippi and SBW Copy Cat ran a 13.950 to with the Open 4D. “Copycat” is a six-year-old Mississippi-bred gelding by Blazin Jetolena and out of SX Dr Peacharita, by Dr Nick Bar. Blaise also placed third on her other horse, BR The Tonka Taxi, to win over $4,000 between the Sunday Open 4D and the Adult Sidepot.

The Average at the Christmas In Dixie paid out $32,750. Taking home the biggest piece of that pie was Cambrie DeLaune of Bush, Louisiana and VF Leo Stinson. “Leo” is a seven-year-old stallion by Eddie Stinson and out of Licorice Leotard, by the Thoroughbred stallion Coup De Kas. Cambrie and Leo clocked a 14.075, 14.290 and 14.169 on three runs for an average time of 14.178 seconds. They earned over $5,600 during the weekend!