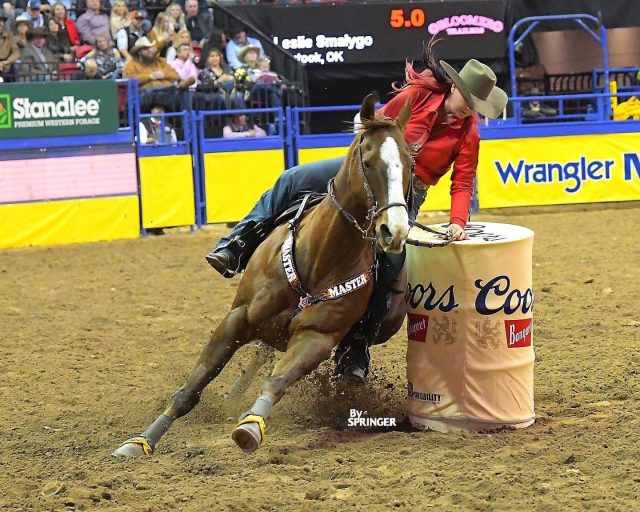 Leslie Smalygo, a first-time WNFR qualifier, was first out on the ground last night. She and her horse Justaheartbeattofame, aka “Gus,” had a perfect first barrel. The big chestnut gelding does not look easy to ride. He gets so close to the barrels that Leslie had to reach down to keep the second and third from falling. Nevertheless, this talented pair kept all three barrels standing. They ran out of the Thomas & Mack with 13.41 seconds posted on the leaderboard. It was the fastest time of the rodeo so far and stood for the rest of the round!

Gus is 12-year-old off-track Quarter Horse by Justaheartofawarrior and out of Yawl A Fame Maker, by Dash Ta Fame. As a two-year-old, he made five starts on four different tracks in Idaho. His best effort was a fourth place finish at Sandy Downs in Idaho Falls. Leslie bought Gus when he was three years old and patterned him herself. In 2018, she filled her WPRA permit on Gus. This year was an exceptional year for the team. They set the arena record in Guymon, Oklahoma and won their performance, semi-finals, and placed second overall at Cheyenne Frontier Days. Leslie came into the WNFR in 15th position,  but is currently sitting 7th in the world standings with $158,342 in earnings. She is 9th in the aggregate.

It was a big night for Emily Beisel. She and her horse and Namgis D 33, aka “Chongo,” clocked 13.43 to be second in the round. They bumped the first barrel but made up time by perfectly executing the turns on their second and third barrels. The $22,851 second place check put Emily over the $1 million mark in WPRA career earnings. She has earned a total of $198, 866 this season alone. She is sitting 13th in the average and 5th in the World Standings. Although Chongo has hit a few barrels this week, he continues to demostrate why he has been a fan-favorite for years. The 12-year-old grey gelding by Bucks Hancock Dude out of Track Goddess, by Eyesa Special, is cool, calm and collected in the alleyway, but accelerates as soon as Emily gives him the cue.

Placing third in Round 8 were Lisa Lockhart and Promise Me Fame Guys, aka “Levee.” They were last out on the ground and still managed to clock a 13.49 second run. Levee is a seven-year-old gelding by Aint Seen Nothin Yet out of Bar Blue Lass, by FC Aboo. Levee was the 2021 Ruby Buckle Futurity Reserve Champion with trainer Samantha Flannery. His futurity earnings exceeded $120,000 prior to being purchased by Teton Ridge for Lisa to ride. Levee made an appearance in one round at the 2021 NFR, but was still quite green. With more seasoning, he is making some very solid and consistent runs for Lisa this year. They have only knocked one barrel, which puts Lisa 3rd in the aggregate. She is 4th in the World and only $37,000 behind the top-ranked cowgirl.

Only two barrel racers have made it through all eight rounds without knocking a barrel: Shelley Morgan and Bayleigh Choate. They are sitting first and second in the average respectively. Hailey Kinsel, Jordon Briggs and Wenda Johnson are first, second and third in the World Standings. Heading into the final two rounds, many of the competitors still have a shot at the World Champion title!

Stay tuned for our next recap after round 9. Until then, here are the current standings: