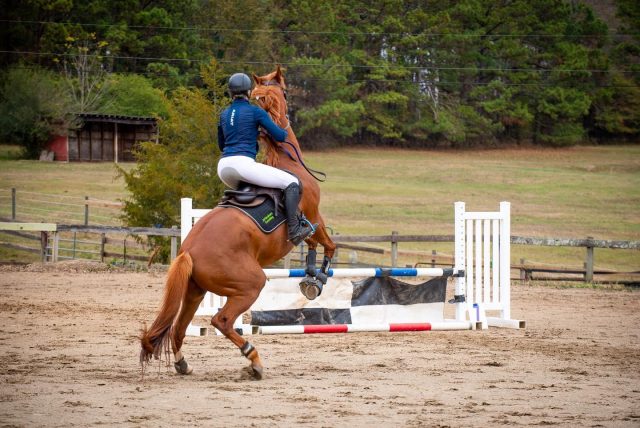 “The same goes for jumping … There’s a plan to the fence and after the fence. Having a plan that is responsive but not reactive makes the difference between a ride that gets to all the fences … and a ride that has refusals and run-outs.”

Welcome to the next installment of Thoroughbred Logic. In this weekly series, Anthropologist and trainer Aubrey Graham, of Kivu Sport Horses, offers insight and training experience when it comes to working with Thoroughbreds (although much will apply to all breeds). This week, come along for the ride as Aubrey discusses her logic on having a plan when you ride or handle your horses.

A life surrounded by Thoroughbreds often makes this statement more of a norm than an exception. That said, working with green or hot horses, one of the best ways forward has always been simple: Have a plan.

This notion came into play last night as one of my fantastic, but new-to-Thoroughbreds helpers struggled to walk a usually quiet, but relatively fresh-off-track TB down to his field. He danced and wanted to be up with his friends. She stuttered and responded to him, trying to hold him back. The situation built but never got out of hand. From a few of steps ahead, I turned around and yelled perhaps the most unhelpful thing in the moment, “Have a plan and stick to it.” Then more specifically, and perhaps slightly more helpfully, I described what the plan should be, “Keep walking, ignore him.” They kept moving and made it to the field without further incident. 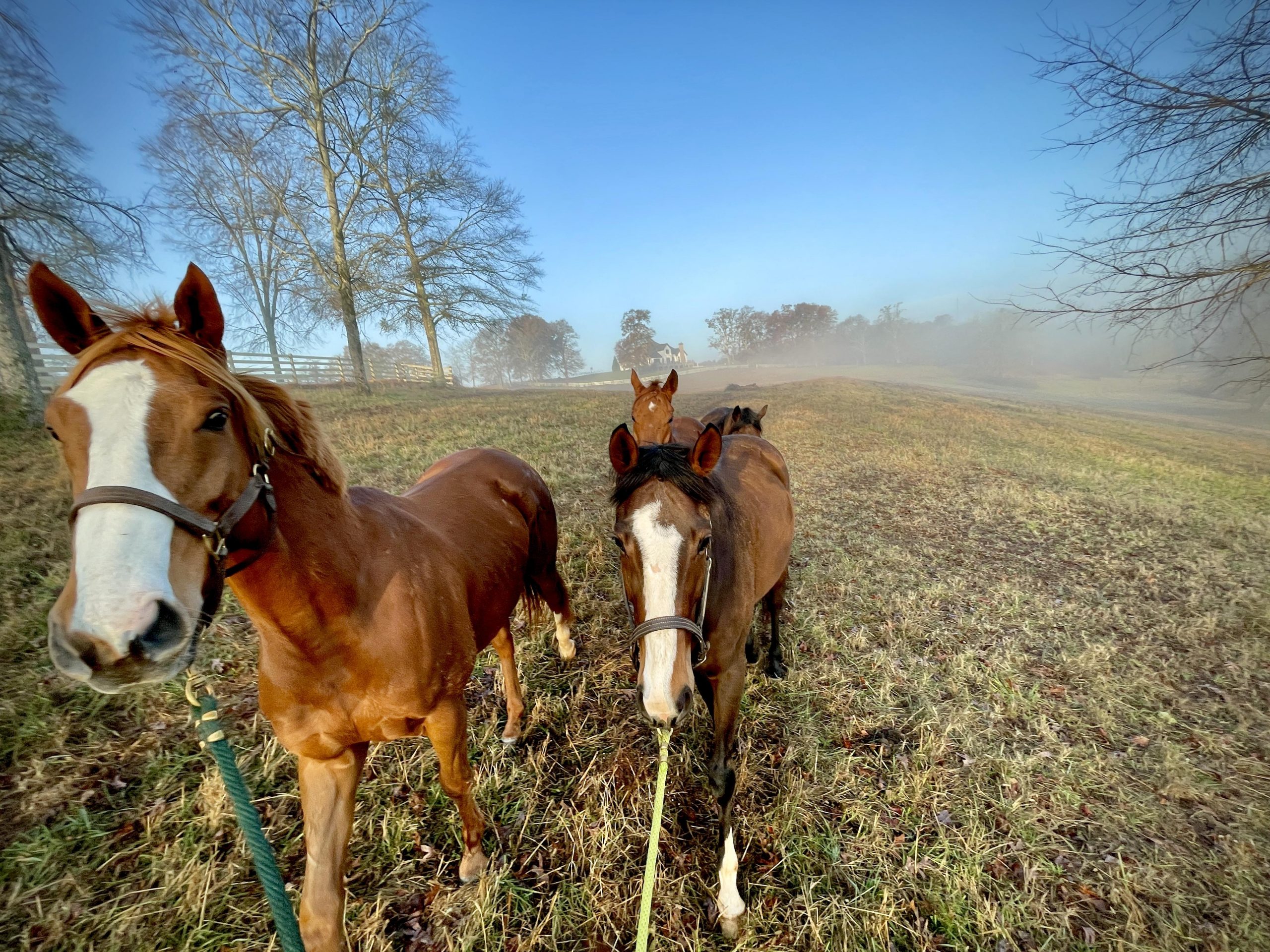 Goofy shot of two rather well behaved brothers (Bayou Prospector, left, and Unbridld Bayou, right) leading in quietly from the big field with Snaps and Aspen following. Photo by author.

I have started to say the same thing to people trying out my young Thoroughbreds — before trotting or cantering, they have to have a plan. I make sure they know where they are going on each circle and know what is in the way and which side of the jump they are going to. The goal is simple: Aim to stay on course first, then figure out your speed and shape etc. second.

This is one of those ‘Keep It Simple Stupid’ things. But it is a hack that works nearly every time. By having a plan — aiming for those basic goals and literally staying on course — a rider or handler gives the horse confidence. That said, it is important to note that by ‘plan’, I mean a bungee, approximate kind of plan, not a rigid, ultimatum type. 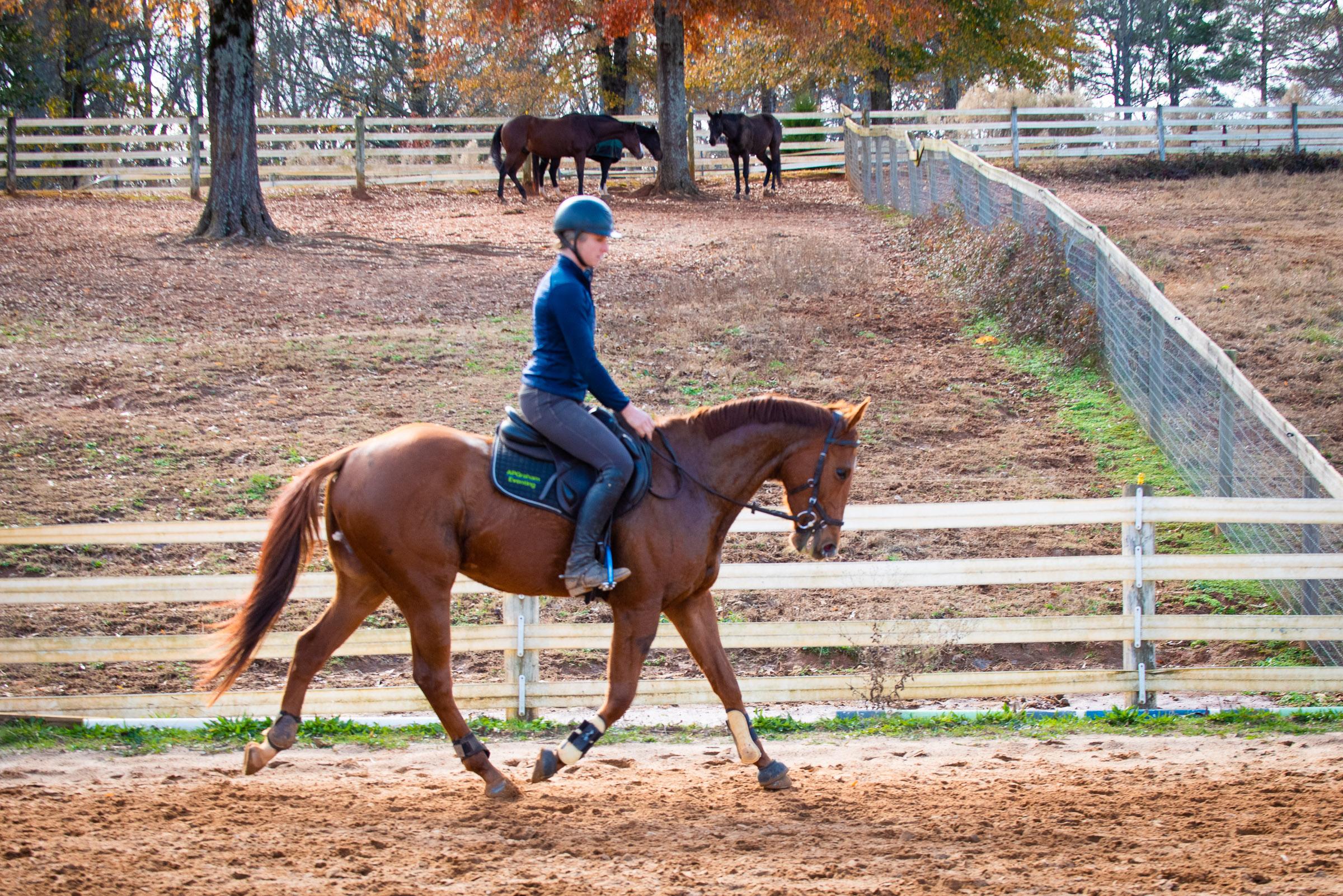 Snaps (Mr. KW) is coming along super well, but definitely requires a ride shaped by a responsive not a reactive plan. Photo by Kelly Robison.

“Yes, I feel your shoulder going that way, doesn’t matter, we’re still on this turn” means the turn will eventually get better and the horse will start to listen. You can correct the speed later, so long as you know where you are going. If you try to fix the speed without clearly communicated steering first, you end up running into things or nearly doing so.

On the flip side, reacting to the horse, for instance, shifting course immediately when they bulge, or crow hop or fall in sets off a chain of reactions: rider to horse, horse to rider’s new input, rider to horse’s new reaction. And suddenly, a dropped shoulder now has rider and horse off balance galloping around unsure of where they are headed or at what pace. 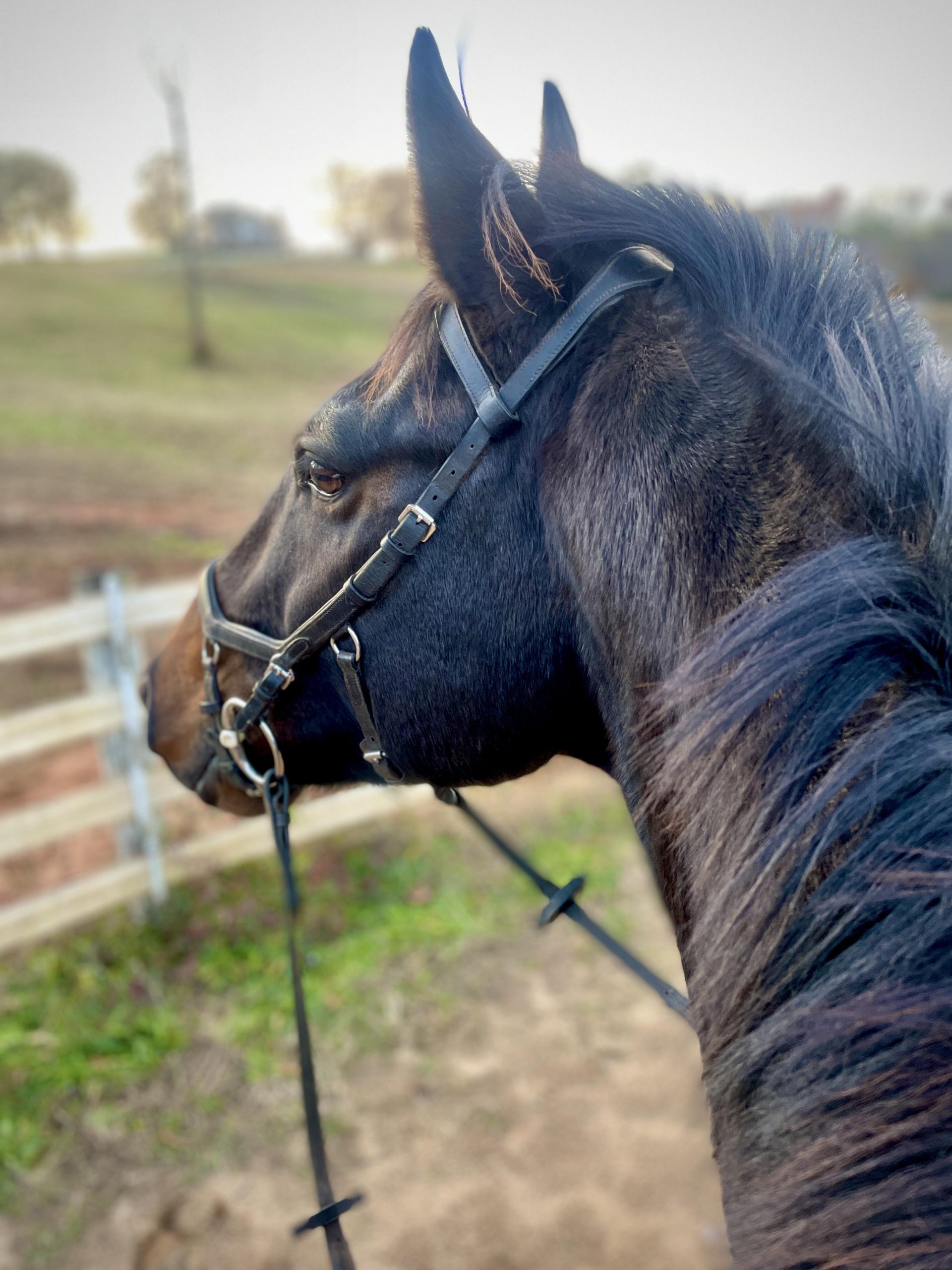 Madigan Cat, known for bucking jockeys off at the track, has been on a careful plan to give him confidence under saddle by keeping asks clear and simple, and rides positive and short. Photo by author.

It is the same thing with handling them on the ground. I always aim to have a plan:  I want to walk out to the field at this given pace. I need you next to me. We’re walking on this course where there is less gravel. If the horse walks in front of me, I move them to the side and correct them without stopping or leaving my line. If they lag, I encourage them to catch up. If they dance sideways, I just keep my track and pace and the same loose lead I started with.

Sticking to the approximate plan lets me stay less reactive. Sure, there are ground rules (there always are): I stop you stop, and walk next to me at my pace. But after that, I only have to correct the things that force me off my plan, and then, right back to it. In the short run, there is a lot of me laughing at these goobers while they do typically goofy things. As they ‘get it’ and begin to absorb the confidence that comes with the plan, then one can increase the asks. In the long run, there are a lot of quiet, well behaved horses walking on a loose line out to their field. 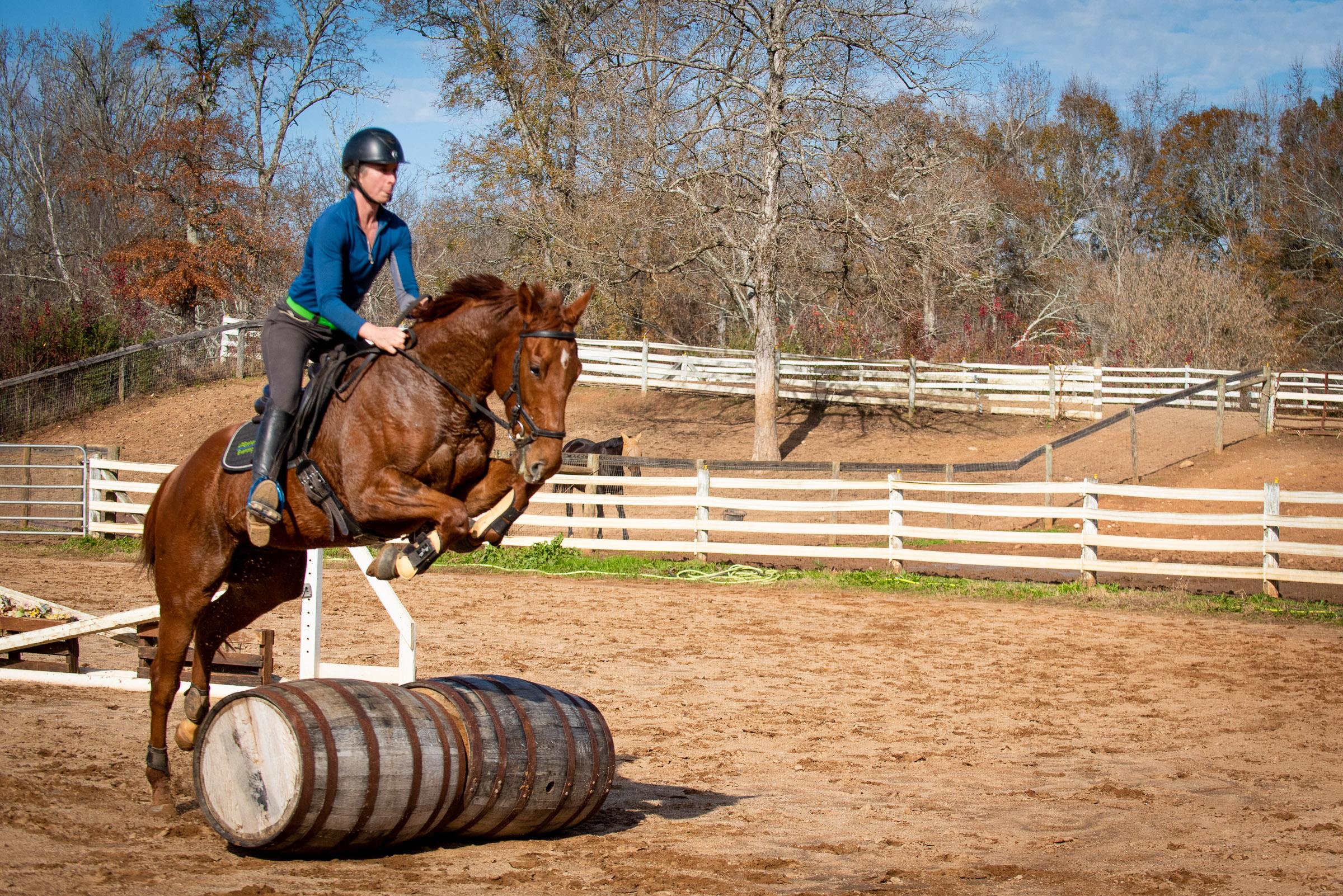 Snaps figured out the whisky barrels without too much trouble. The plan was straight and over — no worries about the rest. He understood the assignment. Photo by Kelly Robison.

The same goes for jumping – we walk the course so that we have a plan. There’s a plan to the fence and after the fence. Having a plan that is responsive but not reactive makes the difference between a ride that gets to all the fences, even if the distances are a little iffy sometimes, and a ride that has refusals and run-outs. When riders pull a horse out of a fence or off a line, they have changed the plan. Usually it is better to sit up and keep leg on and let the horse figure it out, even if the jump ends up goofy. Madigan’s progress is a pretty cool example of a plan going well.

Alright, there are caveats, of course:

The plan isn’t about micromanaging — it’s a big picture thing. I’m pretty sure my horses hate micromanaging as much as I do. So, a plan (any plan) needs to be confidently responsive, not reactive. The aforementioned ground-rules are key: safety and obedience come first. Then next is knowing what to do to correct behavior when it goes beyond the “knock it off, goofy” level. In other words, the plan has to come with skills — how to slow down, how to rebalance and turn, how to kick on, or how to tell them to knock it off and keep moving. Plans also must come with the recognition of when things are fine to carry on and when they are not — too fast, too unbalanced too green for the ask — or when they need a circle, a halt, a deep breath, or a reassessment. 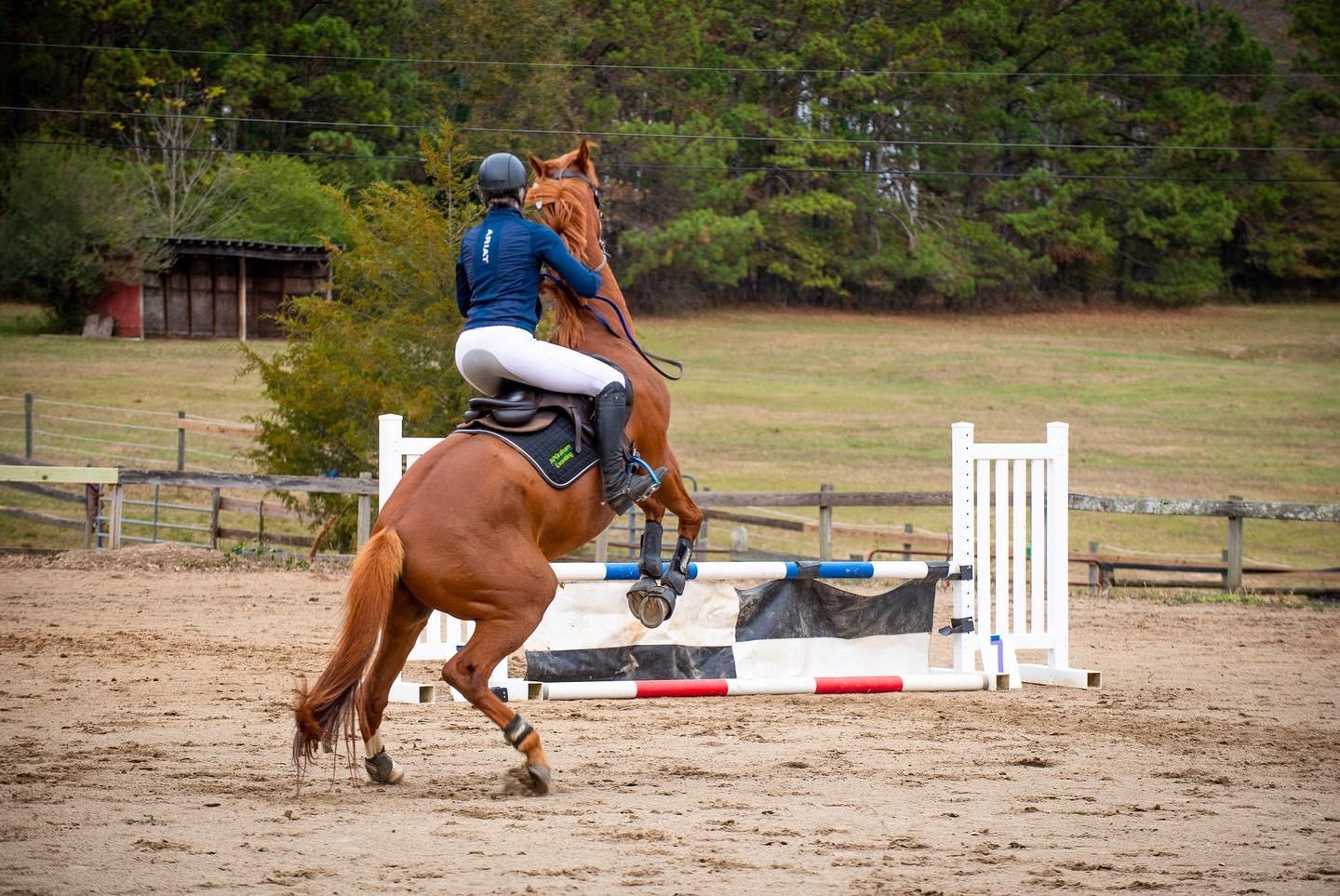 For this course, keeping Crafty Charger pointed at the fence was critical to getting him over. He settled and jumped around fine after an initial dramatic performance. Photo by Amanda Woomer.

Needles Highway is quickly growing into one of the biggest (lovable) twits in the barn. He is also one of my favorites — talented, smart, and able to gauge just how much he can get away with with each human. Under saddle, he has it all: looks, uphill movement, quiet ridability, and a joy that comes from doing his job well. 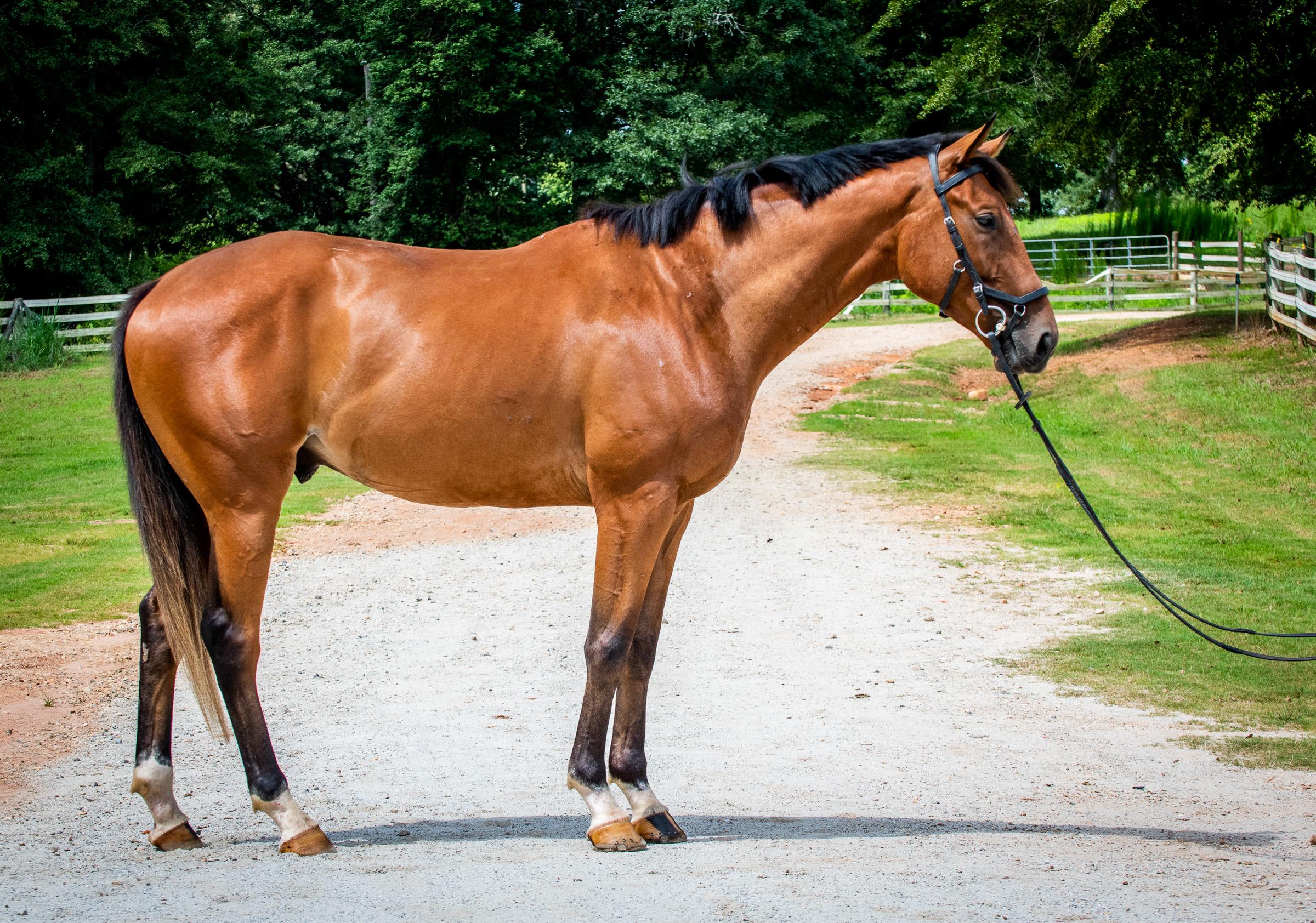 Needles Highway being his handsome, twittish self. Photo by Alanah Giltmier.

The goal was to take him to the Young Event Horse series this winter — but not to push him too much as a three-year-old. A kick in the field that sequestered now has him up for surgery this weekend. I could react, feel frustrated, and get mired in the way in which the plans went off course, or just respond to the need, get the surgery and adjust the timeline. Who cares if he doesn’t make YEH, we’ll still be out and about this year, aiming for the long-game and the eventual upper-levels (fingers crossed). 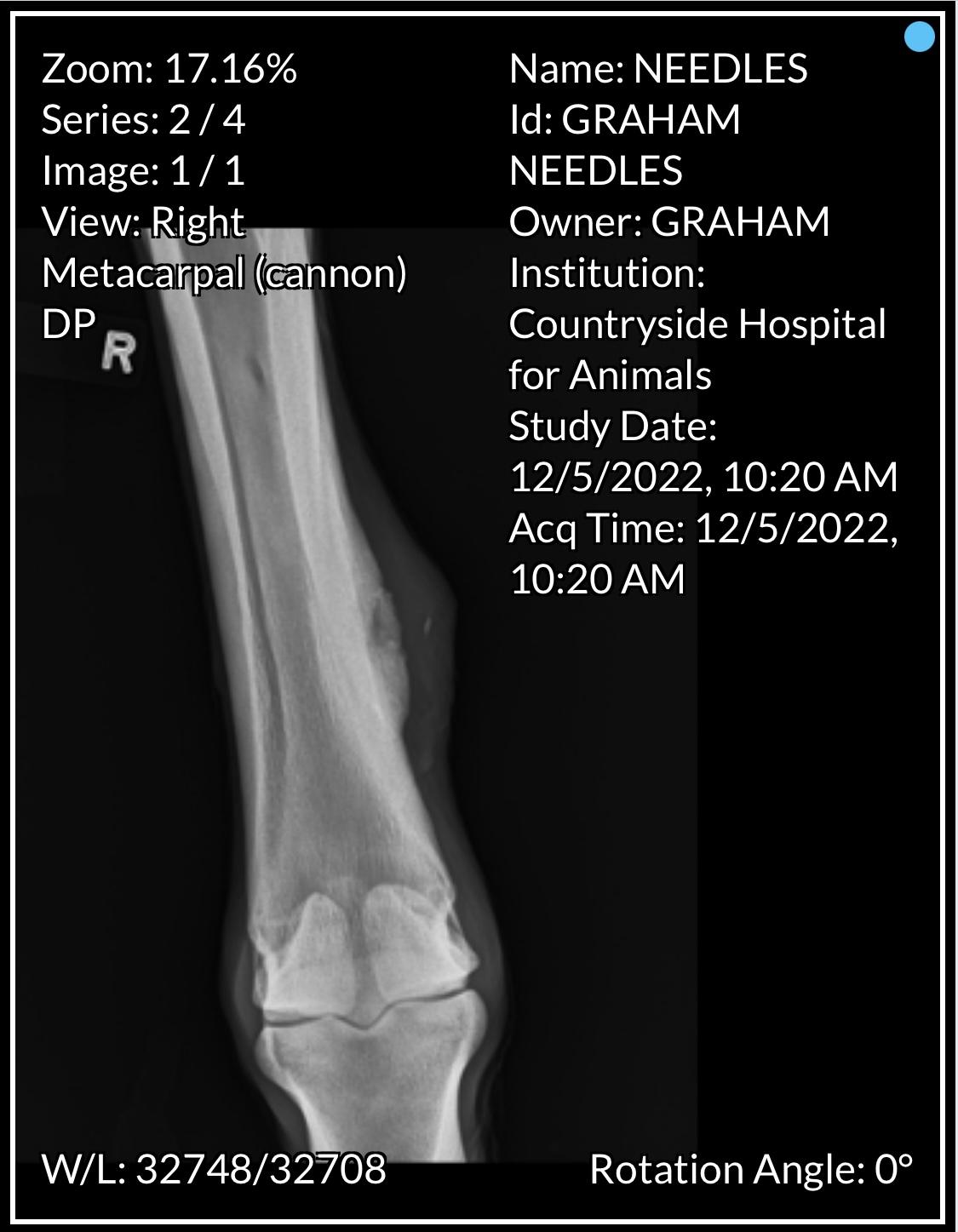 Needle’s radiograph from yesterday. Yep, that needs surgery and an adjustment to our plan’s timeline. Radiographs by Countryside Equine.

This whole ‘plan’ thing probably sounds pretty predictable. I guess it is. But the application is so broad that I can’t help but continue to see how this notion of a responsive but not reactive plan makes such a difference. Whether looking at my horses on the ground and in the saddle, or taking a peek at my business and my own personal aspirations, I suppose it has an annoying amount of traction and affords the ability to keep one’s eyes up and ride out and over the goofy bumps that life tosses into the road.

So grab a game plan, hop on and hold your line. It’s a wild ride sometimes, but damn, it is always worth it.