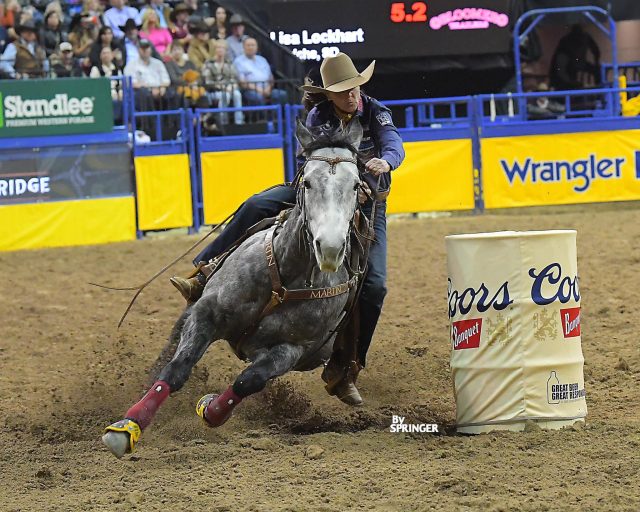 During Round 6 of the WNFR, Bayleigh Choate made her best run yet, Emily Beisel and Brittany Pozzi Tonozzi tied for first, and downed barrels shook up the Average and World Standings. There will be a battle for the World Championship heading into the final rounds!

The sixth performance of the WNFR was dedicated to the rookies. Therefore, Bayleigh Choate, the Barrel Racing Resistol Rookie of the Year, was first out. She chose to ride Hail To Be Famous, aka “Dash.” Dash is a seven-year-old gelding bred in Texas by Terri Willingham. He is by Dash Ta Fame and out of Itty Bitty Boon, by Flaming Talent. Dash, like several other horses at this year’s WNFR, began his barrel racing career with Kassie Mowry. Bayleigh and Dash had a perfect first barrel which set them up great for the rest of their run. They stopped the clock in 13.63 seconds. It was Bayleigh’s best run so far and it was good enough for third place in the round. Bayleigh is sitting 5th in the average and 13th in the World Standings.

Second on the ground was two-time World Champion Brittany Pozzi Tonozzi on one of the many great horses she has bred and trained, Babe on the Chase, aka “Birdie.” Birdie is an 11-year-old mare by Chasin Firewater and out of Streaking Six Babe, by Streakin Six. Brittany and Birdie have been a consistent team this week. They made a very correct run with no wasted motion. Brittany was all smiles as she galloped out of the alleyway as a time of 13.57 seconds flashed on the leaderboard. They would not be outrun the rest of the night. After hitting a barrel in an earlier round, she is sitting 8th in the average and 11th in the World.

Emily Beisel and her great gelding Namgis D 33, aka “Chongo,” were the 14th horse and rider team to enter the arena last night. Usually, the ground would be very deep by that point, but the WNFR committee has started raking around the barrels between riders. This has greatly improved safety. It also means that riders with a later draw have a better chance at making a fast run. Emily and Chongo were able to do just that. Their timing around the first barrel was impeccable. They also got around second and third barrels in textbook style. Emily and Chongo tied Brittany and Birdie for first place. Emily is sitting 14th in the average and 5th in the World.

Lisa Lockhart made another beautiful run on Levee to be fourth. With no downed barrels in six go-rounds, Lisa has moved to 1st average and 3rd in the World Standings after coming into the WNFR in 14th place overall. Jessica Routier and Shelley Morgan picked up 5th and 6th place last night. Many had trouble getting by the barrels. Leslie Smalygo and her horse Justaheartbeattofame, aka “Gus,” stopped the clocked in 13.54 seconds which would have been the fastest time posted last night, but a penalty of 5 seconds had to be added to their time for knocking the second barrel. Jordan Briggs, Margo Crowther, Stevi Hillman, Hailey Kinsel, and Kassie Mowry also hit barrels last night. Hailey and Jordan are still sitting first and second in the World, but it is going to get very interesting in the final four rounds. There is going to be a battle for the World Championship!

Stay tuned for our next recap after round 7. Until then, here are the current standings: