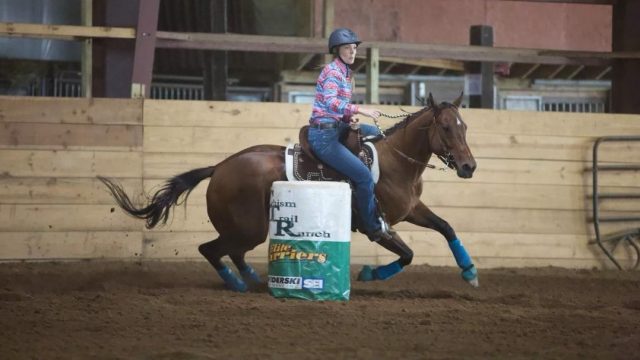 Horse Nation writer Katelin Parsons reflects on her experience with kissing spines surgery and shares what she’s learned since having her horse undergo the procedure.

It has been almost two years since my horse had surgery to correct kissing spines. In that time, I have learned so much. If I could go back, I would not put my horse through surgery again.

Surgery is extremely invasive and it is much more likely to be successful if a horse is rehabilitated slowly and correctly. If a horse continues to move in the same manner that it did before surgery, the kissing spines can redevelop. On the other hand, if a horse is taught proper movement on the lunge line and under saddle, kissing spines can be prevented and even reversed without surgical intervention.

It is now my opinion that the option to address kissing spines through correct conditioning should be explained more thoroughly to horse owners. The importance of proper exercise in the rehabilitation process should also be stressed. Some veterinarians seem to be selling surgery as a “quick fix” for kissing spines, but surgery is just the beginning. I learned that the hard way. 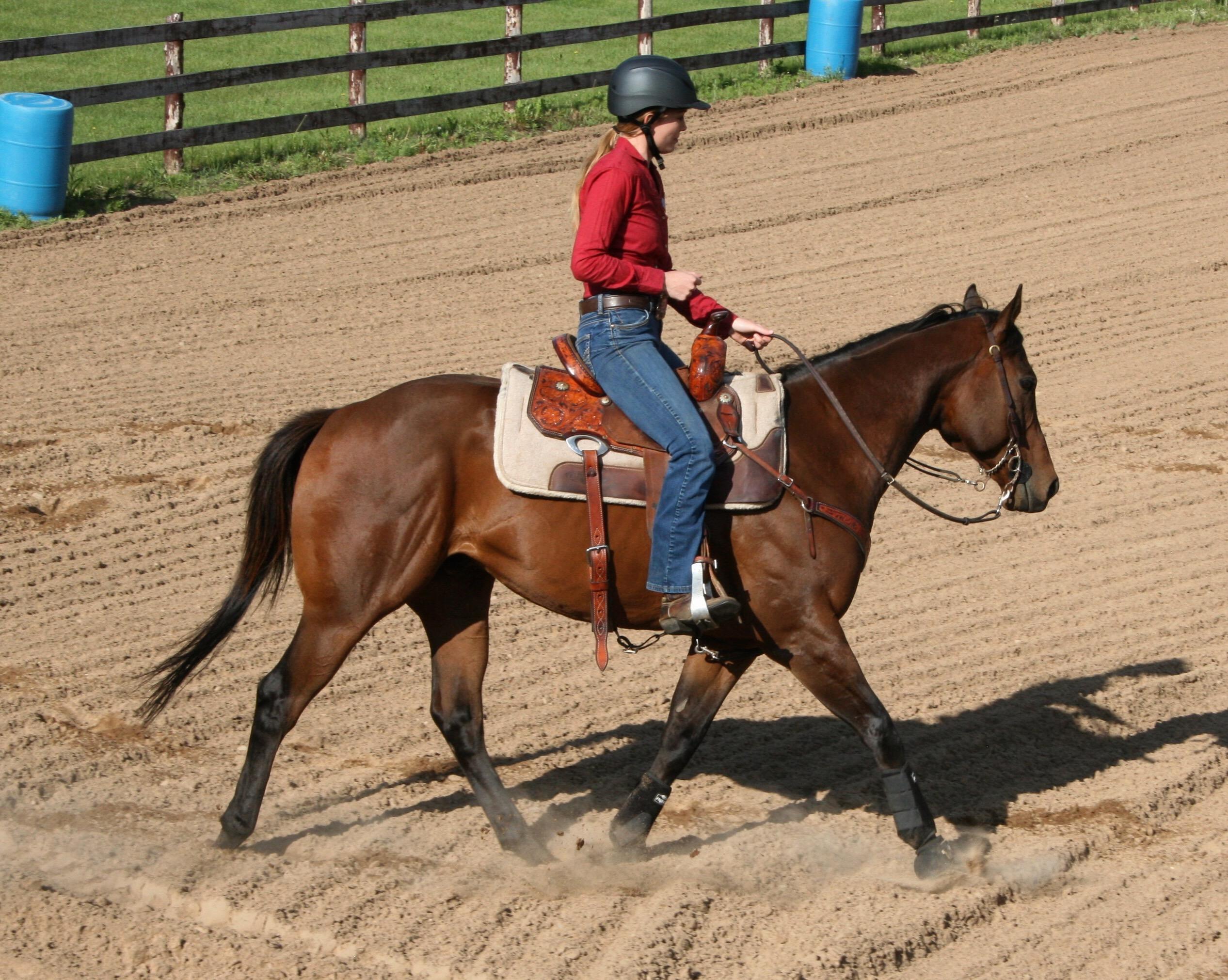 This photo was taken almost four years ago by my husband, Karl Parsons. I used to condition my horses in this manner. I did not worry about the position of their head and neck. I did not notice that they did not track up behind. This had negative consequences for their overall health and soundness.

I am a barrel racer. I had owned my horse, Monkey, for just over six months when he was diagnosed with kissing spines in October of 2019. Monkey is an off-track Thoroughbred that underwent colic surgery the year prior. I have heard that it is not uncommon for survivors of colic surgery to develop kissing spines because the abdominal muscles that essentially hold up the back are weakened by the operation. Considering his history and symptoms, his diagnosis was not a shock, but I still knew very little about possible treatments at the time.

Under the guidance of performance horse veterinarians, we decided to inject his back and integrate exercises into our routine that would improve his core strength. What I did not understand then was the importance of doing our prescribed exercises with proper posture and movement. He was going over trot poles, up hills, and through deep sand, but I wasn’t paying attention to how he was doing those things. He was not using himself correctly and I would come to that realization too late. 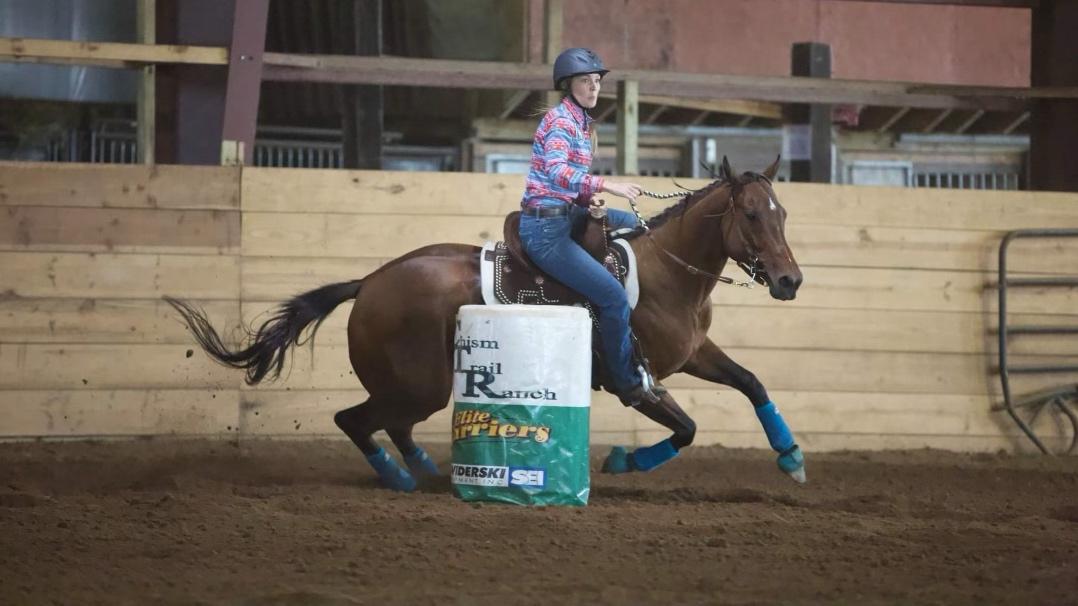 With the “okay” from vets, I continued to compete after my horse’s diagnosis. This was likely another reason why he did not make improvements. I hadn’t made any significant changes to our routine. Photo by Grace Hertel.

Approximately one year after his kissing spine diagnosis, we were trotting through an exercise in the arena when I felt his hind-end give out and his back shudder. I immediately dismounted. I felt disheartened but not ready to give up. I thought that my only remaining option was surgery. I decided to haul Monkey over 1,000 miles to what I felt was the best clinic in the country for kissing spines. The surgery went great and we followed the post-op protocol to a tee. But when it was time for him to go back to work, he was still off on both hinds. 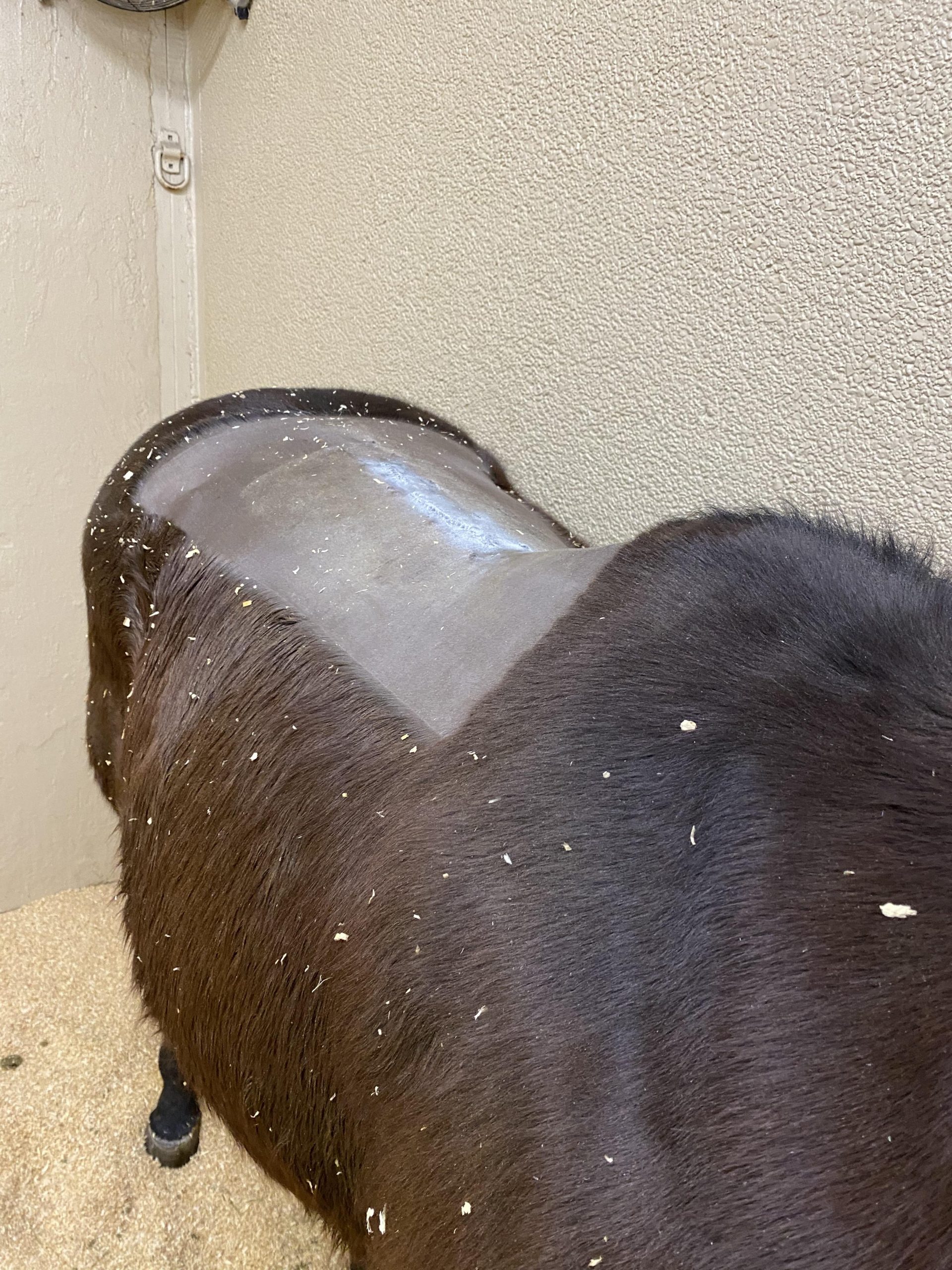 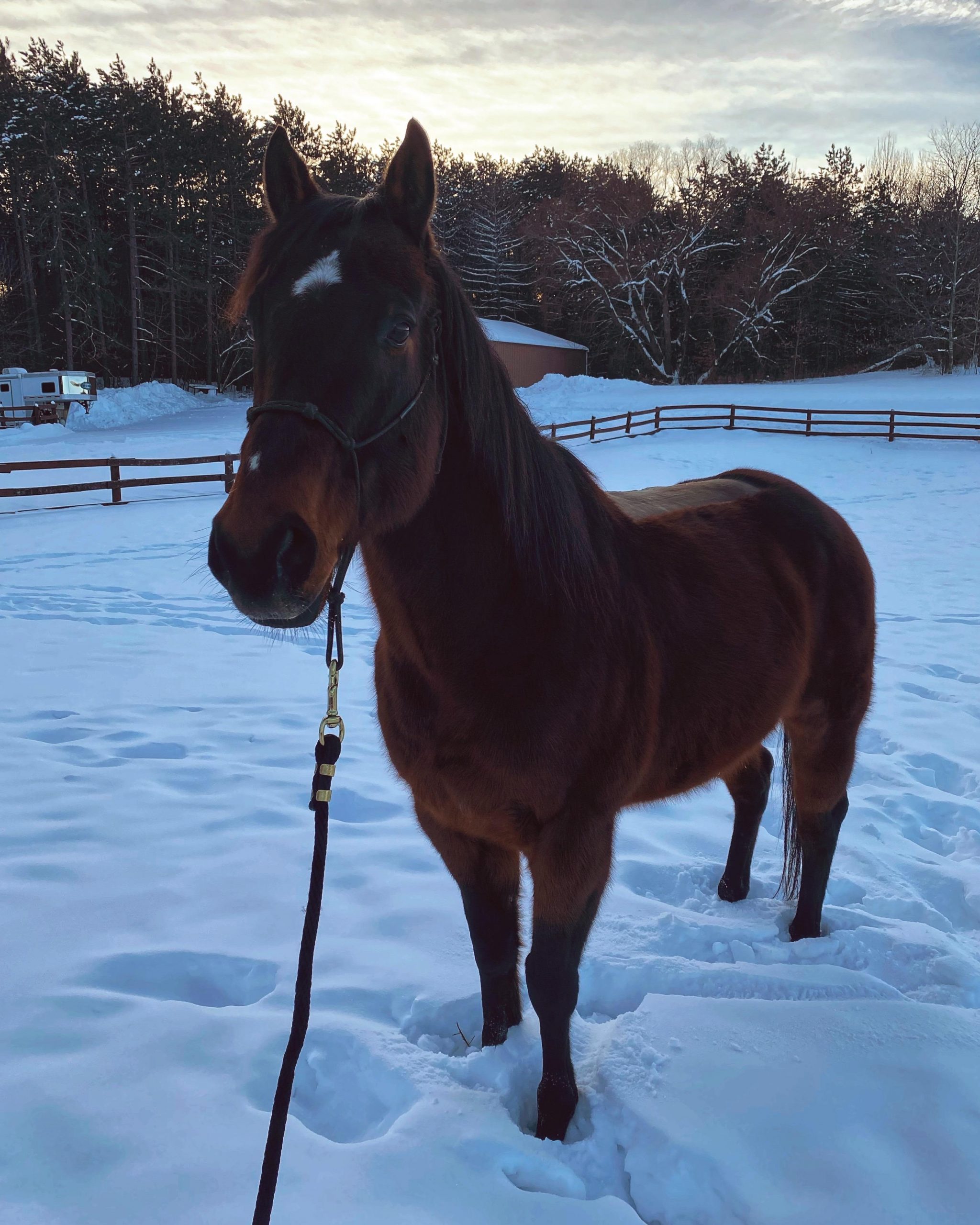 Monkey after his kissing spines surgery. Photos by Katelin Parsons.

That’s when I finally gave up. For almost a year, Monkey stayed in the pasture. I did not think there was anything else I could do for him. Thankfully, my friend Casey French, who was experiencing similar issues with her good barrel horse named Joe, sent me an episode of The Horse First podcast. Casey was seeing good results from the exercises she was doing under the instruction of an equine physical therapist. The podcast Casey sent described how Dr. Audrey DeClue, a vet in Minnesota, was rehabbing kissing spines through exercises on the lunge line. It seemed unlikely that after years of working with professionals that a podcast would lead me to the answers I was looking for, but it did. 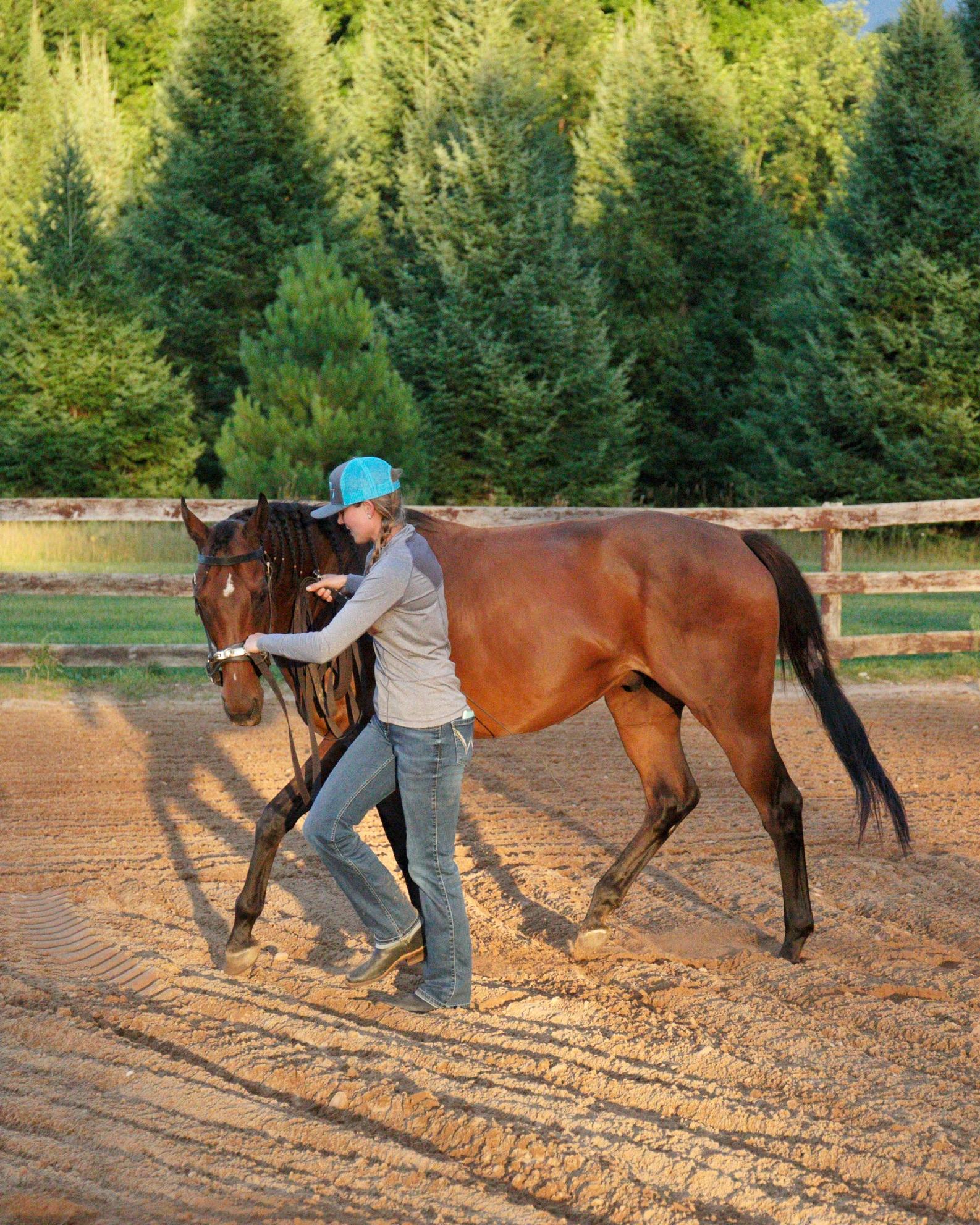 Following A Course in Lungeing from Babette Teschen, I taught my horse how to move on the lunge line with bend in his neck and back. This took months but was worth it.

Feeling inspired but without access to an equine physical therapist in my area, I decided to buy the self-guided “A Course in Lungeing” from Babette Teschen. I immediately went to work. It was hard at first, but I taught myself to recognize proper posture and movement. I spent a month just walking Monkey on the lunge line and stopping him to reward small improvements. He only walked and trotted for the next three months. Slowly but surely, it all came together. He made tremendous improvements in his musculature and soundness. After nearly five months of correct lunging (a year-and-a-half post-op), my horse was strong enough to ride again! 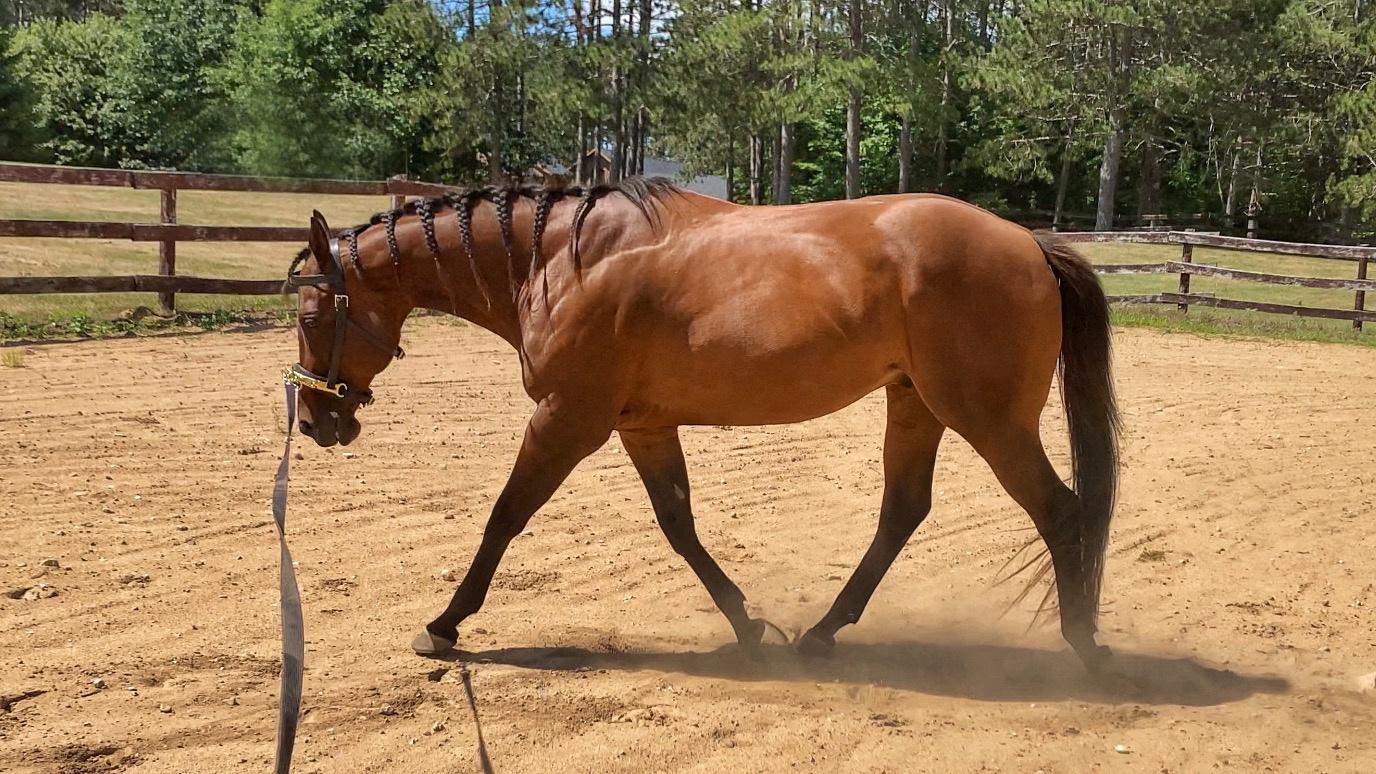 Once Monkey learned how to track correctly on the lunge line, it all clicked! Photo by Katelin Parsons.

Over the course of this journey, I realized that I had been exercising horses improperly my entire life. It was my approach to conditioning that was preventing my horse from getting better. That was a hard pill to swallow. However, I grew up riding in a discipline where “correct” positions are not always conducive for long-term soundness. That may be part of the reason why so many barrel horses are diagnosed with kissing spines. But the demands of many equine sports have undesirable consequences and kissing spines can develop in any of them. That is why I now believe that it is important to make proper movement the basis of any conditioning program regardless of discipline. 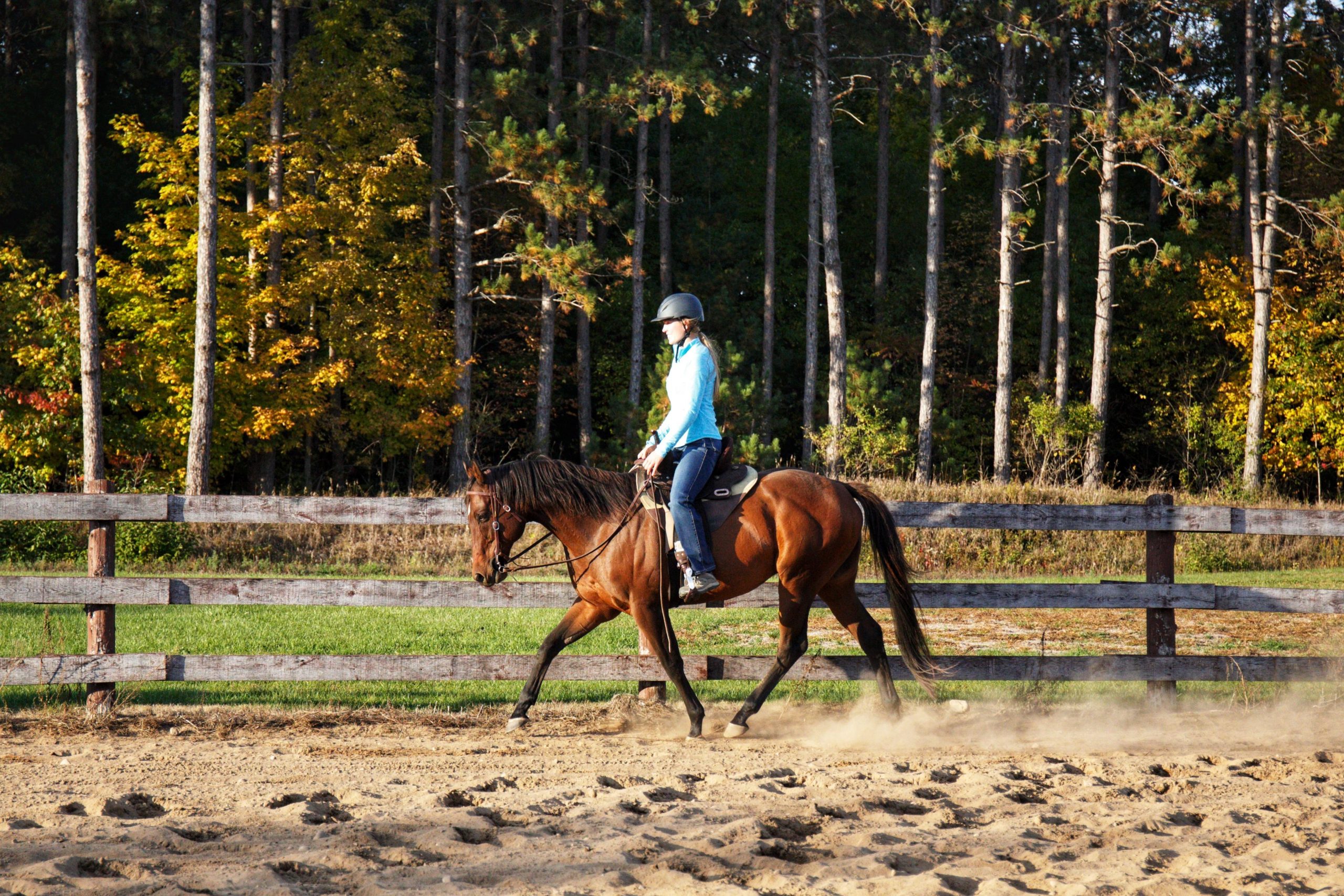 Now that I am back on my horse, I am paying attention to his posture and movement. I know that we must do our exercises correctly for them to be beneficial. Photo by Karl Parsons.

Admittedly, there are still days where I am frustrated and my horse is too. It is extremely boring to take it this slow. I think that’s why so many people choose surgery, especially when some vets are advising owners to resume riding after only one month. I remember when I thought that my horse would be back under saddle within three months of surgery. That now seems foolish. I thought it would be easier to choose surgery over changing my entire exercise and management program, but regardless of whether or not I chose surgery, my methods needed to change. I hope that my story will inspire others to make positive changes too!

Special thanks to my friend Casey French for encouraging me to continue making improvements in my horsemanship. Monkey and I hope to be competing again next spring thanks to all the vets, professionals, and friends that helped us along the way. For more information on developing proper posture and movement in your horse, I recommend visiting https://lungeing.com/

Here is a bit of inspiration to end on. My friend Grace Hertel and her horse, Texaco, followed an exercise protocol after he was diagnosed with kissing spines. Through proper movement, they were able to increase the space between his spinous processes and get back to competing. Grace and Texaco are a great example of what can be achieved through proper exercise without surgery! Photo credit Emily Kay Photography and Lilli Mae Photography.