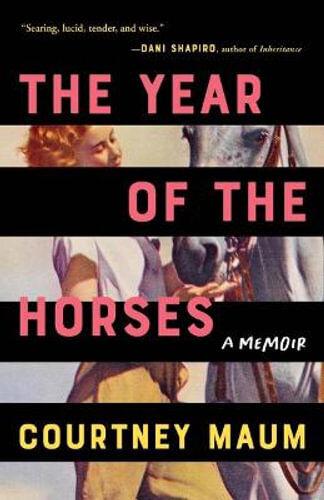 October 18, 2022Noelle MaxwellNoelle Maxwell#BOOK, #BOOK REVIEWComments Off on Book Review: The Year of the Horses

A memoir, by Courtney Maum

The readers’ journey through a period of author Courtney Maum’s life where she’s grappling with depression, a writing career and motherhood begins with Maum standing by her front door as her then two-year-old daughter wrestles with a pair of socks, trying to put them on perfectly — toe seams aligned across the top of each toe, heel pads fitted neatly over the heels, while Maum needs her daughter to Put. The. Socks. ON – pronto – so they can get to daycare. Maum’s impatience wins, that time, and she drives her daughter to daycare barefoot, writing, “We will try again in the parking lot. We will try again.”

Trying again, trying, period, is the thread woven throughout the journey. Readers are transported, after the socks scene, to Maum in a therapist’s office, being asked if she’s filled out an intake form before.

She fills out the intake form. Therapist evaluates it and Maum is told her answers are “the answers of someone with severe depression.”

From here, readers are transported through Maum’s life, her idyllically described early childhood, complete, eventually, with riding lessons and a pony, her younger brother’s birth and her mother’s struggles with his disabilities, her parents’ divorce (which takes horses out of Maum’s life) how Maum finds her love for writing, using it as an escape from everything going on, her struggles in her teens with an eating disorder. Maum lays, seemingly, everything out, exposing it all for readers, but not in a way that feels heavy-handed. Interestingly, I found this book to be fast-paced once I started on it, and ultimately, a reminder of how horses can help us find our way back to ourselves, help us ground ourselves when we need it.

The book is also a reminder that taking a risk can absolutely be worth it. Maum, taking up riding again in her late 30s, dealing with depression, chooses polo. She self-describes as risk-averse and completely opposite in her nature, of the rough-and-tumble nature of polo. As she took up polo in the journey, I found myself rooting for Maum, rooting for her to realize she doesn’t have to be the best ever, she just needs to enjoy what she’s doing, to stick with it. I felt proud of Maum as she stuck with polo – finding her way into it via coaches who wanted to encourage women to take up the historically male-dominated sport.

When I read review books, I keep a reporter’s notebook nearby to jot down thoughts and impressions as I read. At one point, Maum wrote about feeling “downtrodden” after her first arena match because she’d played “slower and clumsier and more afraid than I’d expected,” describing polo as “too complicated and too fast and too dangerous,” describing herself as “a fool and a waster of numerous peoples’ time to have heeded what I’d mistaken as a calling to the sport.” My notes, when I read that part, in black pen in my notebook, all-caps, read, “You weren’t a fool, everyone has to start somewhere.” This book is a great reminder of that fact.

We see Maum’s love of horses rekindled and we see her relationship with her young daughter deepen as her daughter discovers horses, too. We see Maum find a circle of barn friends – and deal with the loss of one of the farms she took lessons at, which burned in a fire. None of the horses survived. Maum was in France, taking a break from social media, and saw another rider’s Instagram post.

The final pages of the book see Maum reconnecting with her past and childhood, looking for a story she’d written as a girl to show to her daughter. The book, ultimately, is a raw, real journey, in the best possible way. It isn’t, like some books about horses healing people can be, a sap-fest – that’s a compliment! The very last pages, in a touch I thought was great, were a list of resources. Resources for people who want to get involved in horses, a “further reading” section and, most importantly, a recommendation for Pscyhology Today’s “Find A Therapist” search engine (which Maum notes is geared to traditional talk therapy) and a number for the emotional and mental crisis hotline. I’m including that number, as well as the Suicide and Crisis Lifeline numbers, for any (US-based) HN readers who might need them:

If you’re having an emotional or mental crisis, the national hotline is 1-800-273-TALK.