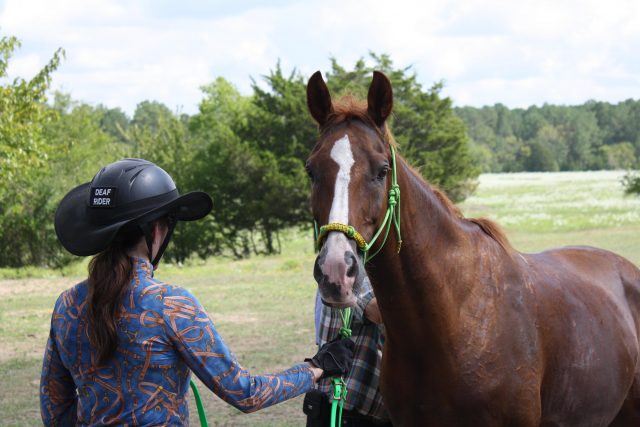 Barn Aisle Chats is a new series where we will meet equestrians from all walks of life and disciplines. Today, we chat with Michelle about endurance, both in and out of the saddle.

Well before dawn, the air was thick with humidity, the sun barely cutting through the dense fog. The morning was a wet and sticky one, typical of a Houston summer, as I drove through the forest of Huntsville State Park. I almost missed my turn onto a smaller dirt road that dead-ended into a tall chain-link gate where two volunteers wearing broad smiles greeted me. After introducing myself as a Horse Nation roving reporter, one offered to guide me the rest of the way.

“We have to have people at the gate, because the owner keeps exotic deer on the property,” she said. “If you’re lucky, you might get to see one.”

Inside the venue’s main camp area, people were busily setting up large buckets of water, grain and hay. 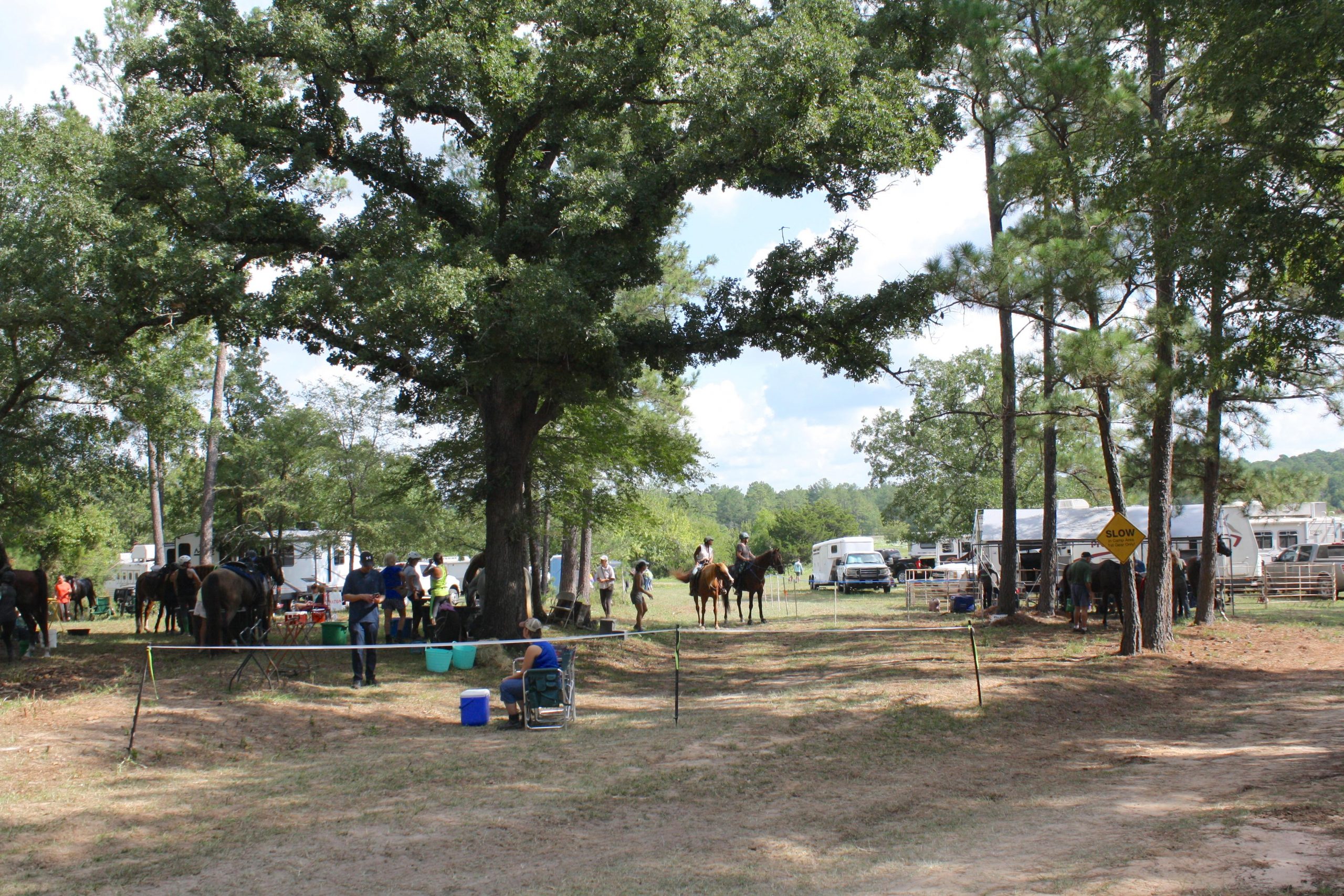 “Where we cool the horses,” Dawn Carey, the ride’s event manager, commented when we were introduced. “Riders have mandatory vet checks and the crews are getting ready for them.”

I learned that midway through the course, all participants must check in and have their horses cleared by a vet. Then begins a mandatory 45-minute wait before they’re allowed on course again.

“It takes a village,” Carey noted. “Most riders will have a crew waiting for them. Everything is about the horse’s safety and well-being.”

Despite the hustle of everyone around me, the atmosphere was exceedingly calm, everyone chatting quietly while waiting. Averaging 10 events a year in Texas alone, the endurance riders of the area seem like a well traveled and close knit group. 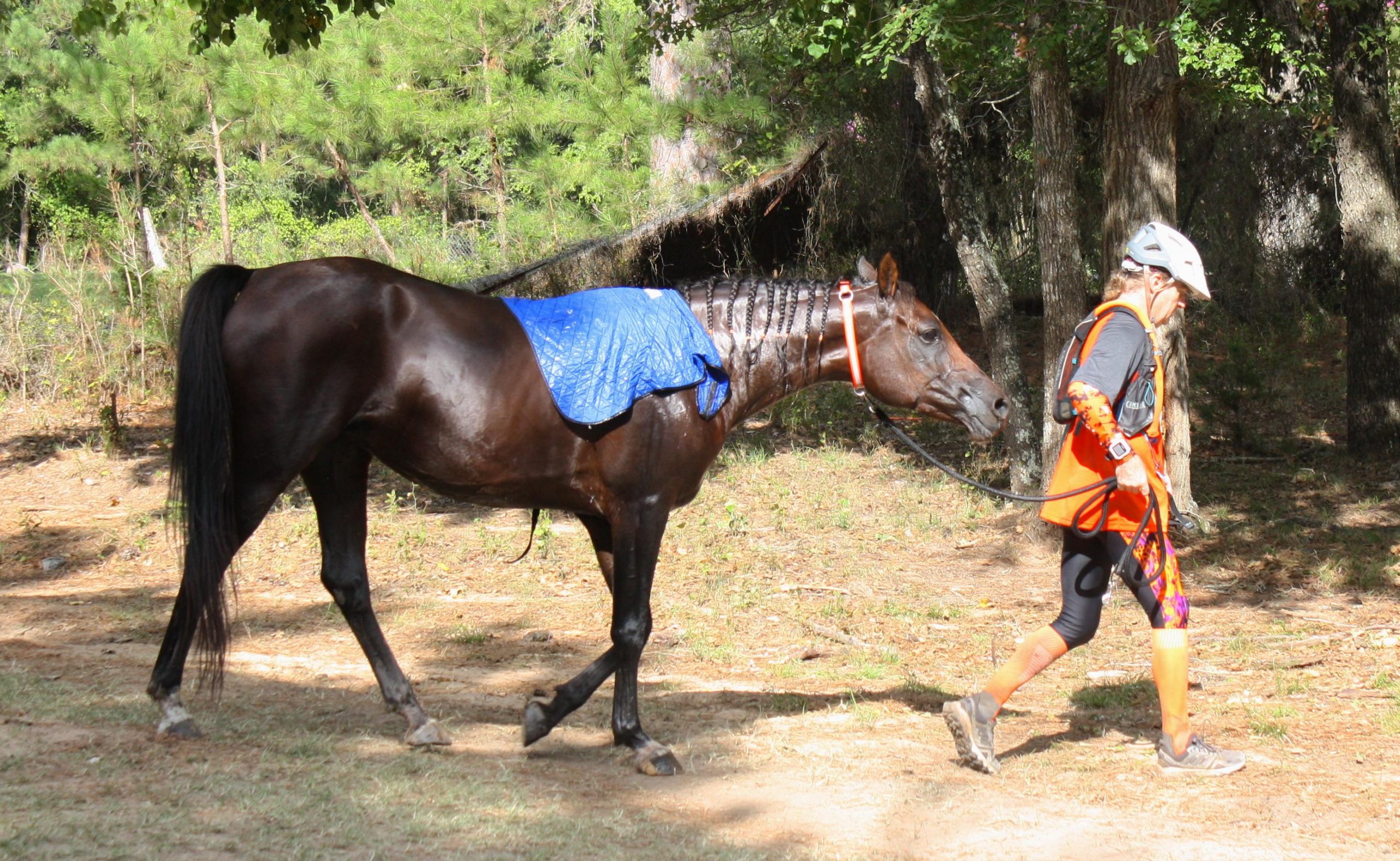 As I ended my conversation with Carey, the first of the riders began arriving into camp. A flurry of activity followed, with horses being “sloshed,” an endurance specific term for cooling a horse with water.

From there the teams proceeded to the vet check where horses were required to have a heart rate at or below 64 beats per minute. 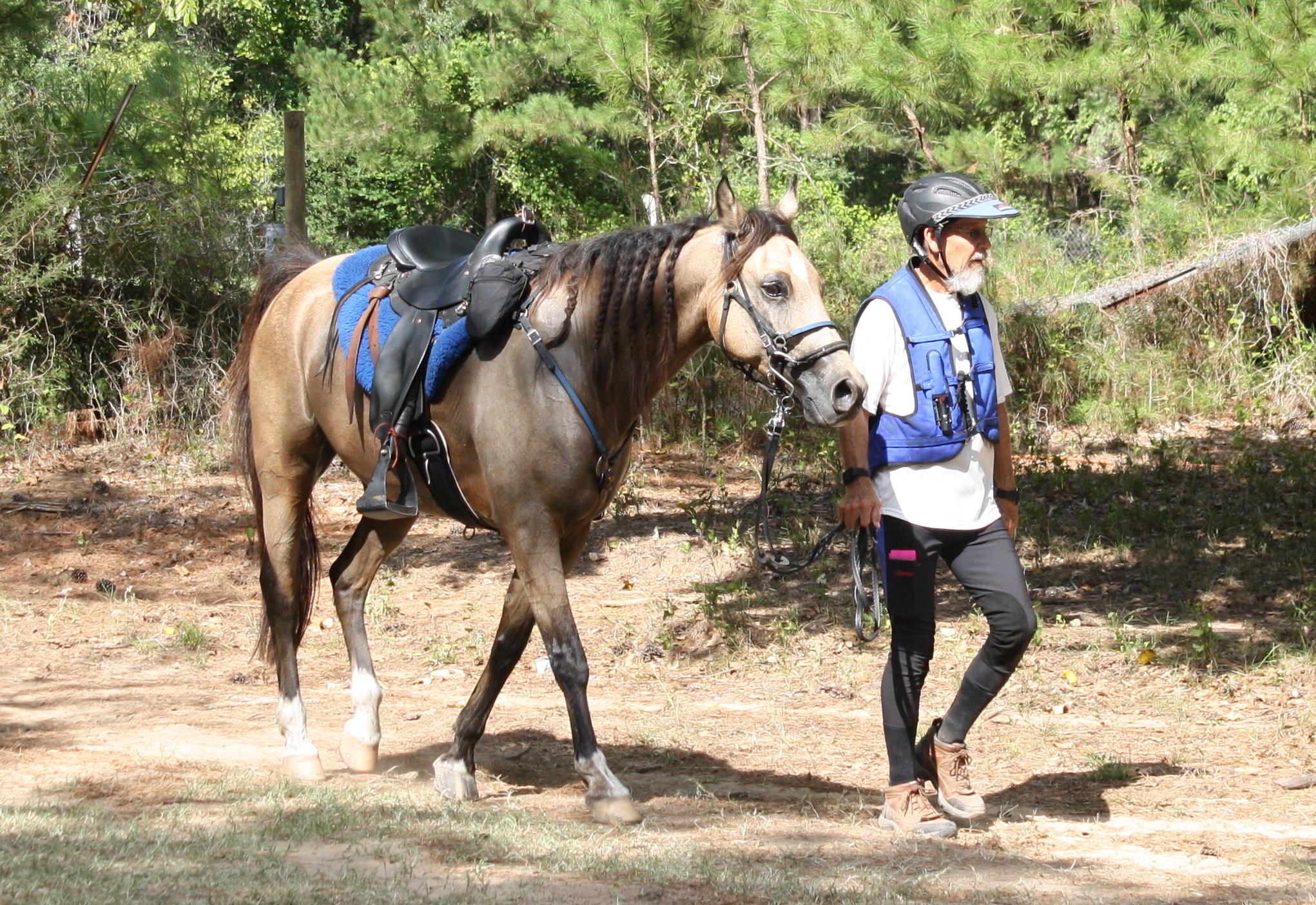 The first thing I noticed was that despite the 25 to 12.5 mile distance they’d just covered, most of the horses were barely breaking a sweat. Some riders rode their mounts in at a walk, while others walked alongside. A strategy decision, I’m sure.

The second thing I noticed was the horses were as varied as the neon-colored spandex of their riders. Arabians predominated, but I spotted a few stocky Quarter Horse types, one long-limbed Thoroughbred, possibly a spotted gaited horse and even a rare leopard Appaloosa in the mix.

Wading through the now-crowded cooling station, my interviewee, Michelle Ludwig, smiled when she spotted me, waving me closer while her horse, a cute young Chestnut, was untacked and drenched with water. 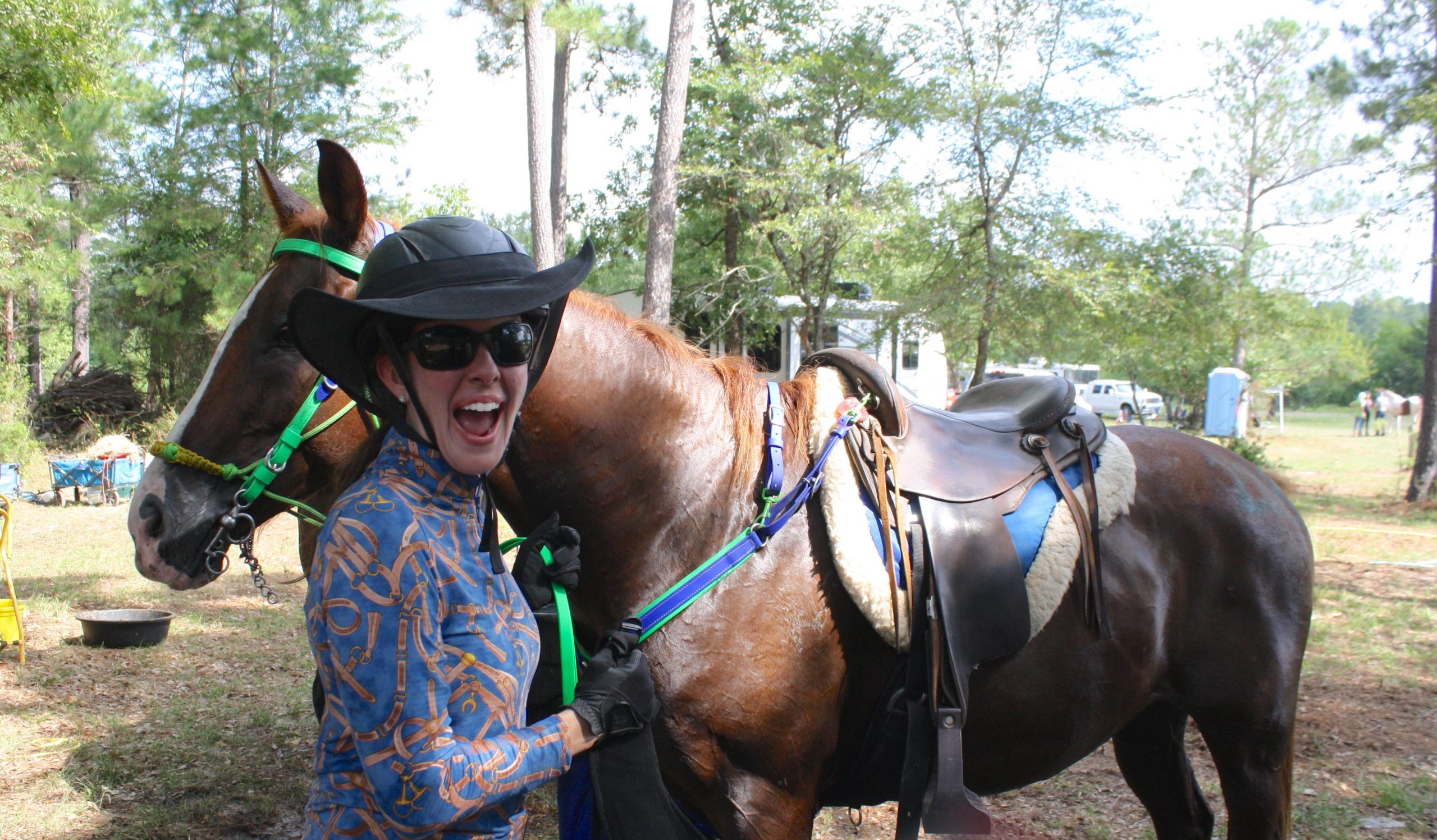 From there we worked our way through the vet check, trot up, and finally to her stable’s trailer, where her horse was given a well-earned bucket of mash and fresh grass hay.

“Whew,” Michelle sighed over top of a smile, clearly exhausted but happy.

I caught up with Michelle on the tailgate of her SUV where she answered questions between munching on what looked like a marmalade sandwich.

“It feels hectic at vet checks,” she said between bites. “Your legs are all wobbly from the ride and you have to do a trot-up to check for lameness and all you can think about is how much you need to go pee!” 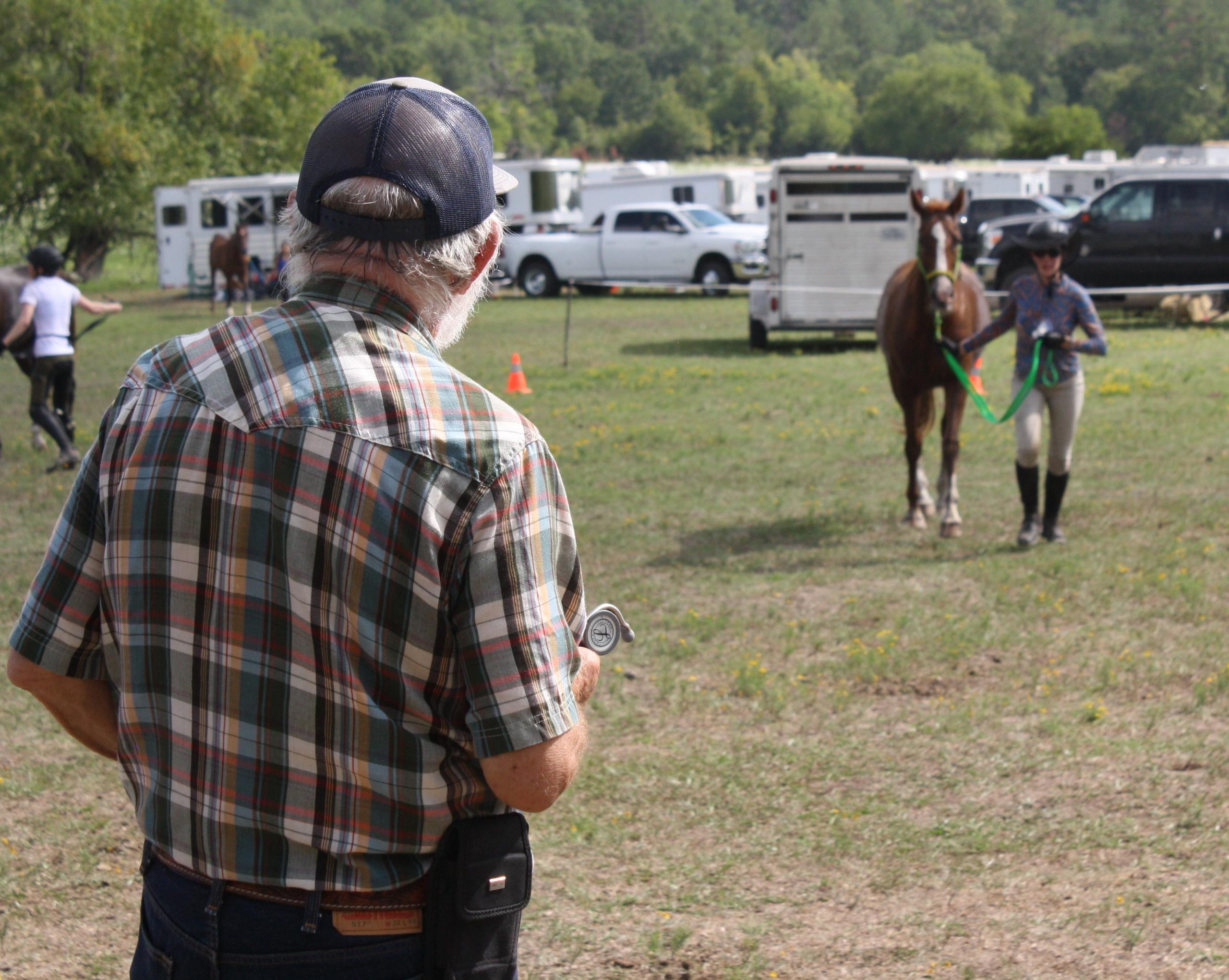 This was Michelle’s second endurance ride, her first being just a few months earlier in March.

“I was on a very enthusiastic and bumpy Arab named Turbin,” she comments about that ride. “I wasn’t in shape at all. I was still breastfeeding and pumping and it was easy to get dehydrated. I hit the wall at about mile seventeen.”

When I asked if she finished, she laughed, “My trainer encouraged and threatened me to finish, since the race completion status stays with the horse if they have an AERC number. So, I finished. There was definitely some crying. I felt everything. It was a lot.”

Michelle grew up riding and volunteered with therapeutic riding programs, an experience she credits with instilling in her a desire to go into medicine.

“But I didn’t ride for a long time. College, medical school, residency … I had no time and no money,” she says. “After my residency I started fox hunting. I did that for five years and then I played polo.”

She faced obstacles from the beginning.

“I finally got my deaf rider helmet badge!” she proudly says. “It helps a lot, but some people still don’t pay attention. Maybe if it was a different, brighter color.” 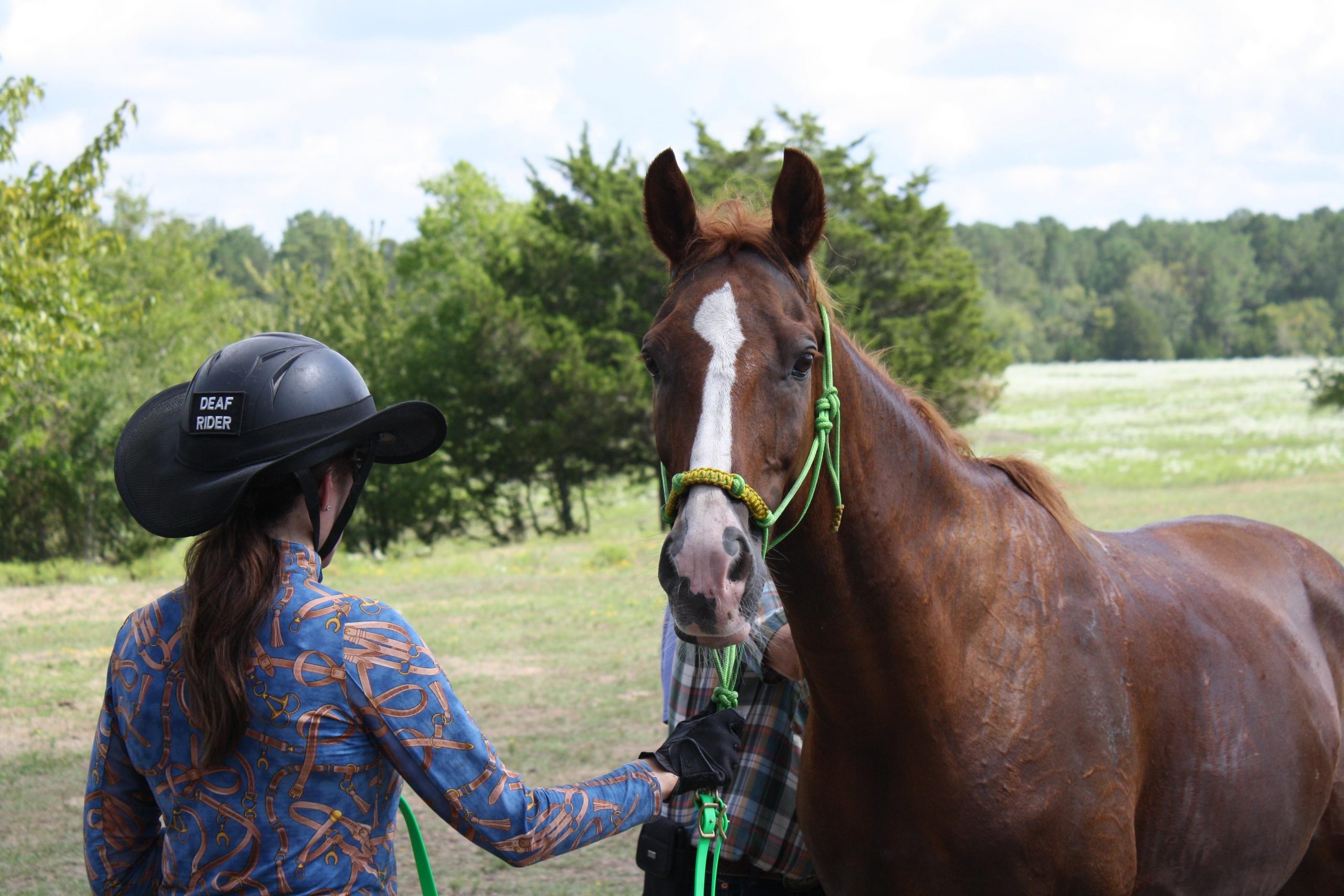 But it was after the birth of her daughter that she thought she might never ride again.

“I had osteomyelitis and diskitis in my lumber spine with an abscess from the epidural. I was on IV antibiotics for three months and in a wheelchair. The pain was excruciating.”

“It was a humbling experience. I needed assistance to go to the bathroom, to shower, roll over in bed… I had an infant daughter I could barely care for. Five months later, I went back to work, but in a back brace. I did physical therapy for 18 months.”

You would think that horse riding would be the furthest thing from her mind but she admits, “As an oncologist, riding is my coping mechanism; my way to give my brain a rest from the heartache that comes from going through the cancer journey with my patients. To think that I might never ride again was devastating and my orthopedic surgeon was telling me that any shear force or twisting motion could disrupt the vertebral bodies from healing. They were saying ‘up to three years’ for the vertebrae to fuse.”

It was then that she found endurance riding. 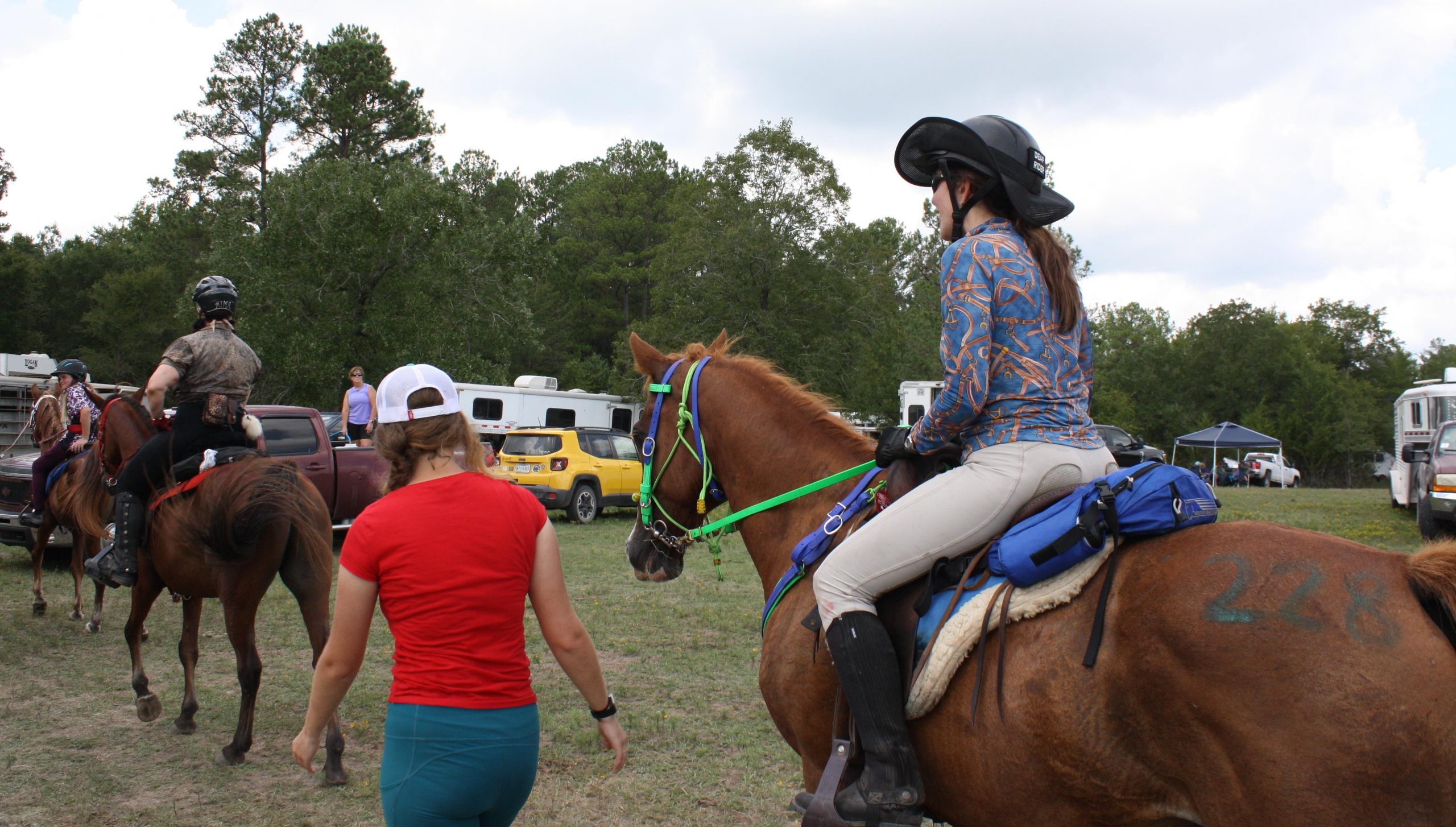 “Polo was too dangerous. Any twisting motion was off limits. But endurance riding combines my love of riding on trails from fox hunting with the camaraderie of polo. I also grew up doing saddle seat on an Arab and an Arab/Saddlebred cross, so I love the breed. Now I’m leasing Twice Rich. He’s eleven and this is his first endurance race.”

When I asked about her training regimen, she answered, “It’s hard to train in the summer in Houston! Richie was bred for it. For him, it’s not an issue. It’s the rider! But I do cardio at home and ride as much as I can. My old fox hunter master used to say that nothing gets you in shape for riding like riding.”

I can hear the emotion in her voice when I ask again about that first race, back in March.

“My daughters made me a sign that said, ‘Go, Mom.’ I cried when I saw it. I crossed the finish line and thought about all I had gone through to get to that point. Not just during that ride, but the last two years of rehab. The motto of AERC is ‘to finish is to win’ and I felt that with every part of me at that moment. My very sore ankles, calves, knees all the way to my sunburned nose and chapped lips!”

“I want to teach my girls resiliency and that day … I modeled resilience.” 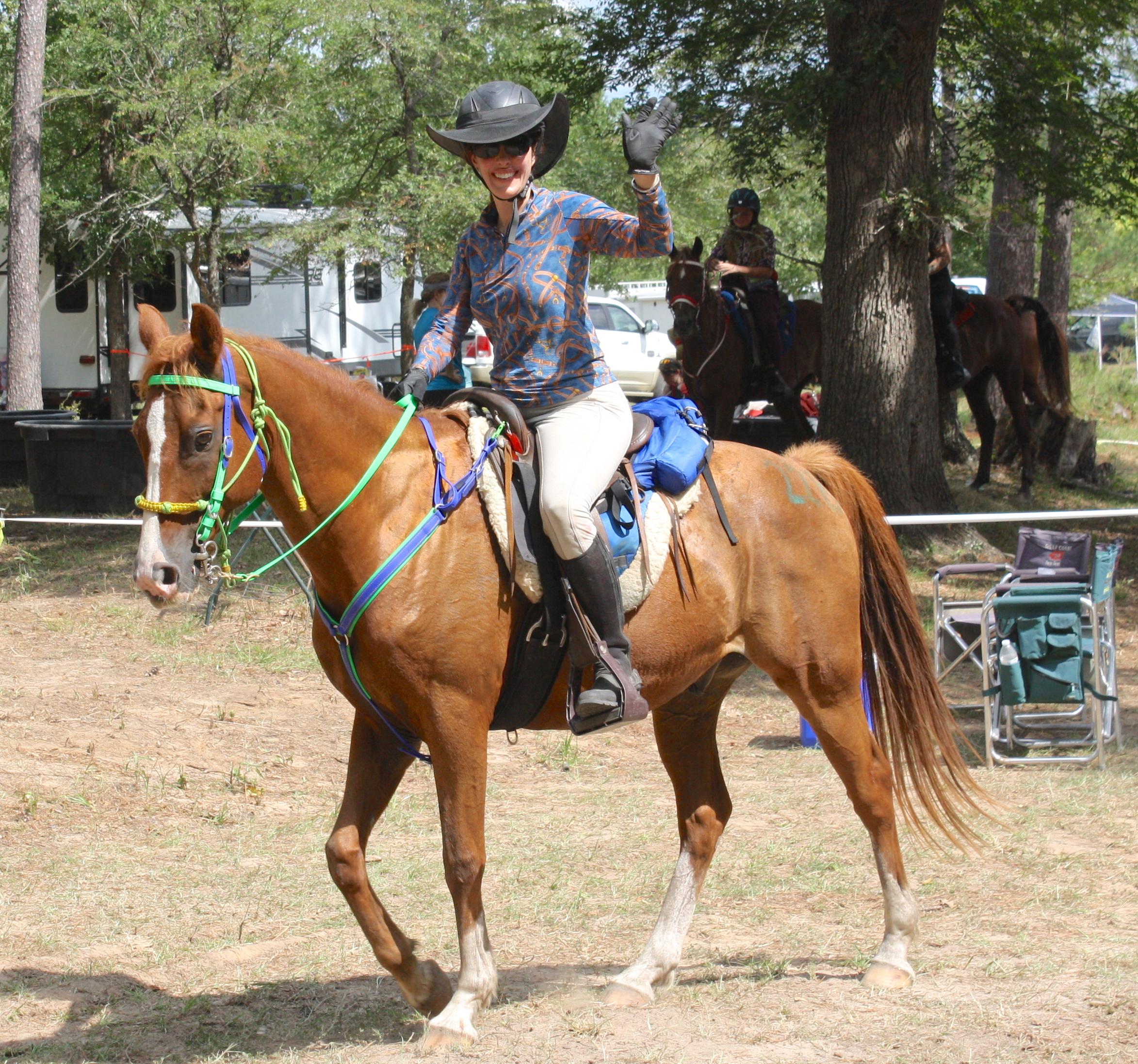 She absolutely beamed as she shared pictures of her daughters’ first riding lessons with me.

“My youngest cries when you take her off the horse,” she says. “She’s just like me. Ha!”

It was at that point that Michelle’s crew said it was time for her to mount up again. She shoved the last bit of sandwich quickly into her mouth and took a long swig of water.

“I told you… it’s the shortest forty-five minutes!”

Soon she was back on Richie, who looked eager to return to the trails.

“I can barely finish.” Michelle commented. “But he’s always ready for more.”

I walked beside her as they headed toward the trailhead and asked one more question: What advice would you give to new riders?

“Riding is a privilege,” she answered. “It represents freedom, both fiscal and physical. Practice gratitude for every opportunity you have to be outside on the back of a horse.”

After checking in with the event coordinator, Michelle smiled one last time at my camera before disappearing around the bend. As the rest of the riders trickled out of camp, the crews shared a quick sigh of contentment before beginning preparations for their return. 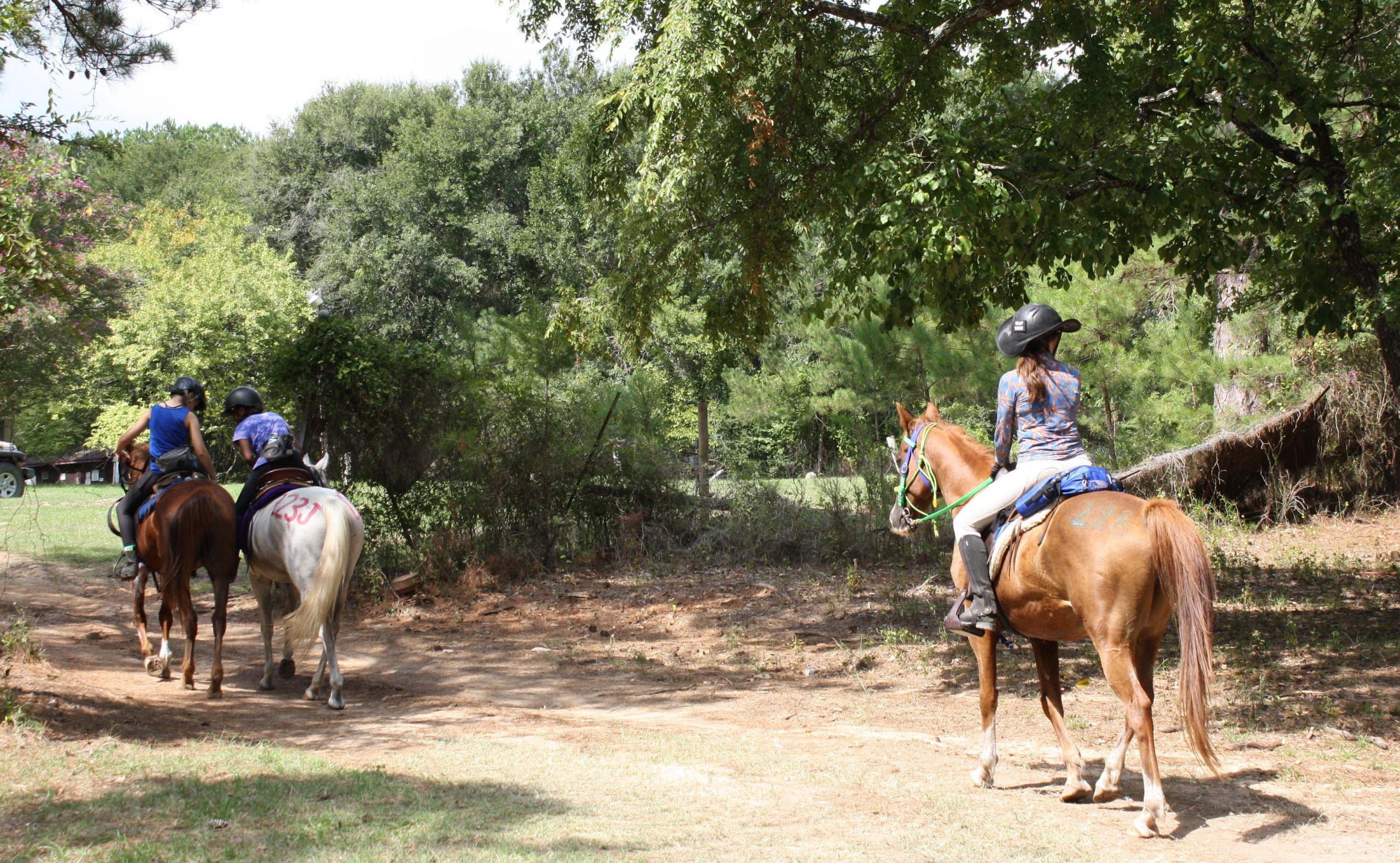 Summer or winter? Depends on what hemisphere I’m in. Winter in Houston. Summer in Colorado.