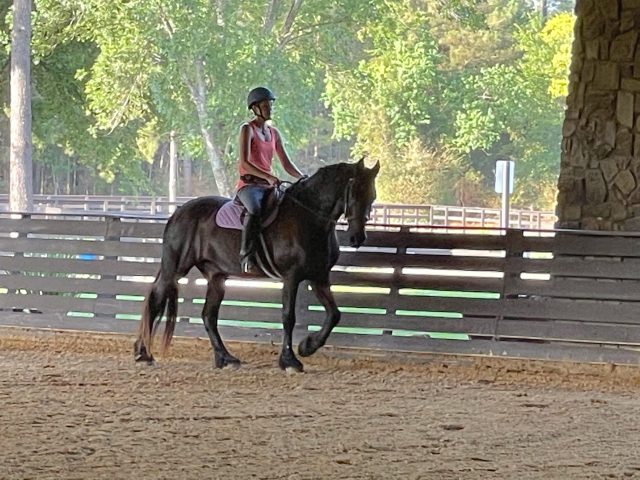 Barn Aisle Chats is a new series where we’ll meet equestrians from all walks of life and disciplines. Today, we chat with Numa about (re) learning to ride as an adult and removing systemic barriers at the barn.

I first met Numa in a writers group at my local library. Their email handle included “brainspaz,” which immediately told me, “Yeah, this person is friendship material.”

They write urban fantasy and have an amazing project in the works called Black Magic, which you can check out at their Patreon. They also dabble in what they call “modern serfdom” as a ranch hand extraordinaire.

Numa: Howdy. Did I tell you I took the internet moniker ‘brainspaz’ because ‘inkweaver’ was already taken? I got about as much flak for that one as I did for my chosen name ‘Numa’ in high school. Then I waited nearly a decade to roll it out. Thankfully, everyone forgot about the Numa Numa song in the meantime.

A: The internet never forgets. But tell us a little about your background with horses? What made you fall in love with them?

N: It’s been longer than I can remember. I know I had a few giant horse plushies that were my pride and joy. I used to feed them breakfast every morning, along with a plastic wolf and several dinosaurs. I used to cut up every horse calendar I got and tape all the pictures to my bedroom walls and ceiling.

A: Not atypical “crazy horse kid” stuff. When did you start riding?

N: I finally got to take riding lessons at age 12 as long as I got good scores in my piano lessons. There are a few life highlights in there. Good times. Not the piano lessons. I’m still terrible at piano.

A: And introduce us to your furry family members!

N: Oh, I love my weird little gang. I’ve got Herbie, the Friesian. We’ll start with him because he’s the oldest. He’s nearly the same age as my little brother.

Weird aside — I like to imagine he was born the night I stayed awake at a friend’s sleepover, holding my black horse plushie that looks exactly like him and wishing or praying with every fiber of my being that it would come to life. I like to think the magic worked and I just didn’t find him for 20 years. 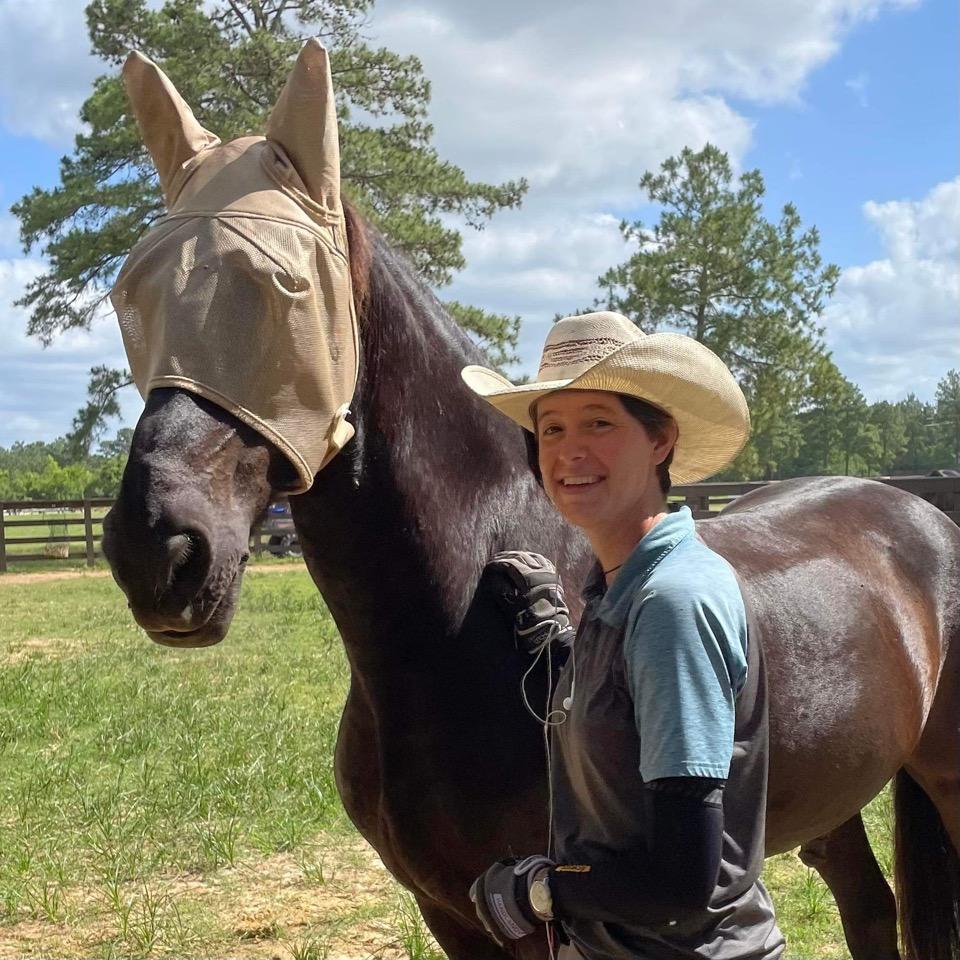 A: And you’re just getting back into riding with Herbie. What’s been the most humbling experience about that process.

N: Learning how to post again at age 30 has been pretty humbling! I’ve never been a star athlete, but I know I was a better rider when I was 15 than I am now.

A: What’s been your best ride so far?

N: I can’t think of a ride that stands out. I’m still getting back into shape and re-learning the basics.

A: What about best ride on any horse ever?

N: The ones where I nearly got bucked off and survived. The worst rides make the best stories.

A: I’ve never thought of it that way, but it’s true! Alright, finish introducing your family.

N: Next oldest is Smeagle, the turtle I bought in a North Carolina gift shop 12 years ago. Then Han, the fluffy boy. Some kind of street mutt from Oklahoma. And then his sis Piper, a neurotic diva. That’s the breed you get when you cross a beagle and a whippet. My youngest is the pandemic baby: Arlo, the chihuahua pit mix. Though if anyone asks, he’s a chihuahua grande. I don’t need any more housing discrimination on my plate. 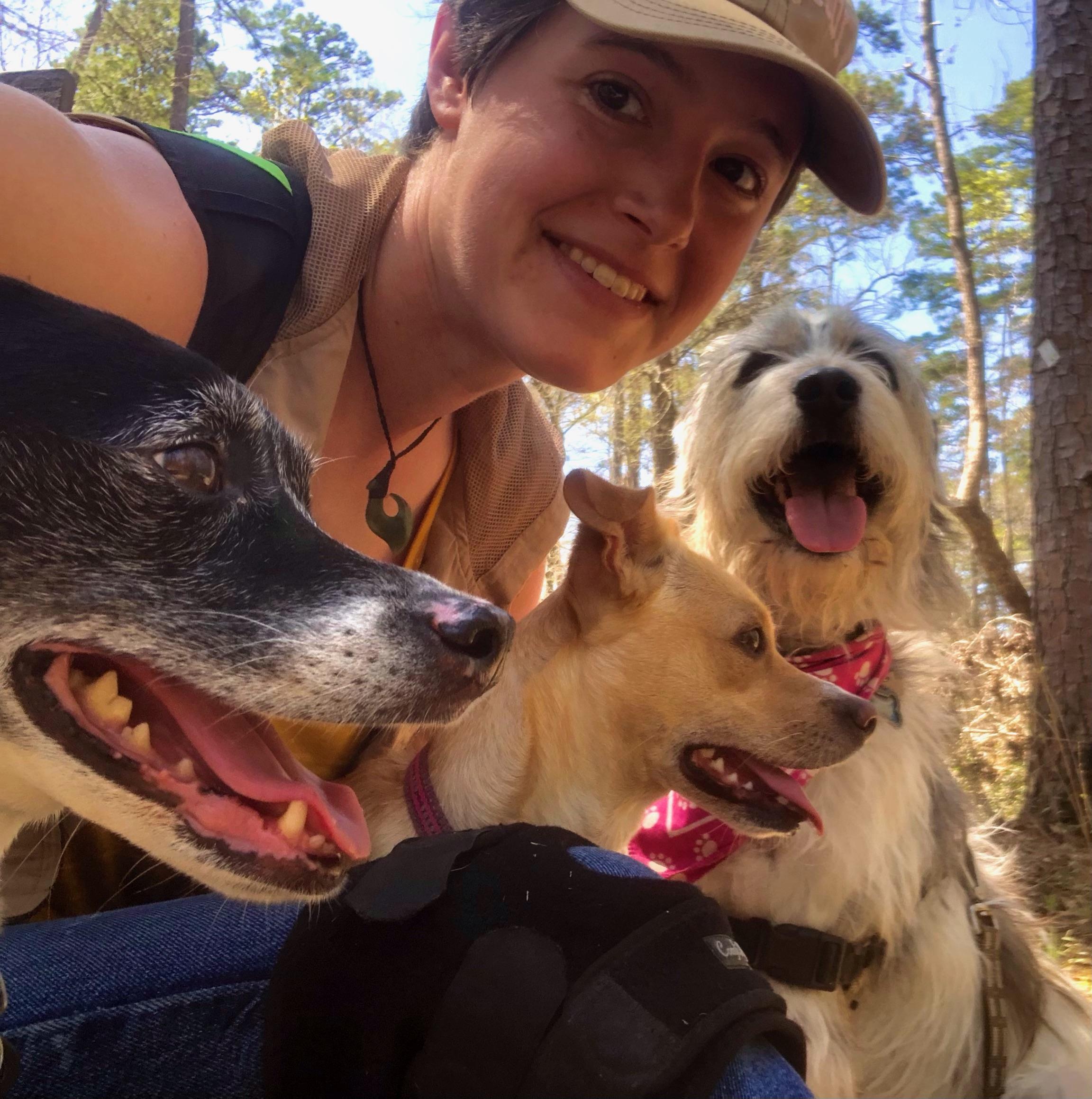 A: That’s a big family and I know you move a lot.

N: The dogs adapt better to the hobo lifestyle, but the turtle and horse definitely do not.

A: What have you learned working at so many different barns?

N: The number one thing I’ve learned is that everyone has their own way about everything. The last place I worked at, we always fed grain before hay. This place? The exact opposite. Nothing to do but roll with it.

A: You recently identified as non-binary and gender fluid. Take a second to tell us what that means to you.

N: It’s something that came about from a lot of soul searching. I always felt like I was doing a sub-par job of being a woman. This sounds so ridiculous in hindsight, but I used to wear — in high school — a necklace every day just to make sure that everyone would know I was a girl. I was so scared of failing to pass. I don’t know why I thought a gift shop paw print mood ring necklace would help.

I also never felt like transitioning and being a man would solve anything for me. I had some, what I now realize, was dysphoria. I just kind of muscled through it and did my best to not cause problems for other people. I tried to fit in. It didn’t do me any good.

Learning to see myself as non-binary meant looking at myself in the mirror as a whole person, beyond anybody’s expectations, and accepting it all. 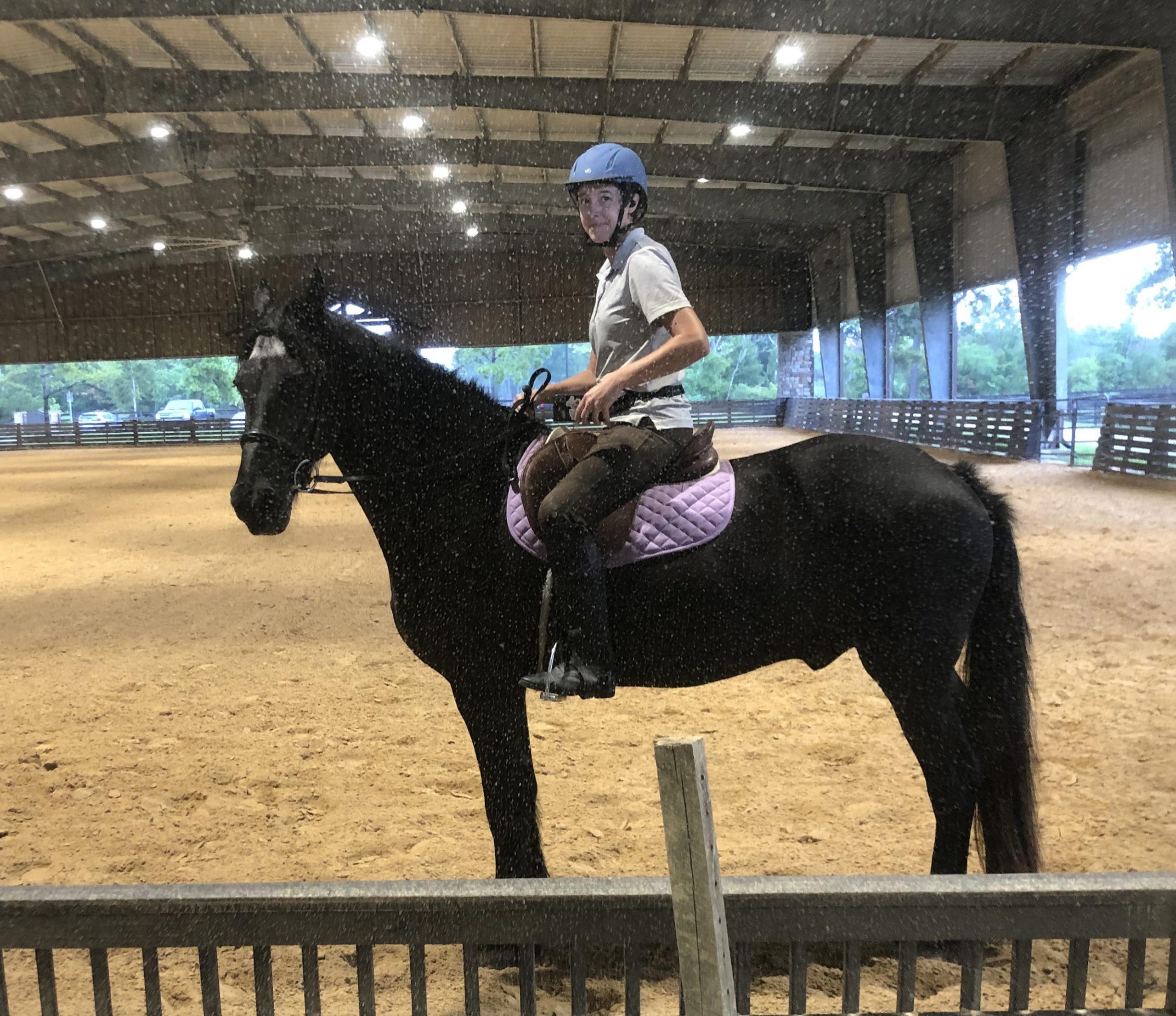 A: Were you afraid to be out in the horse community?

N: That’s a tricky one. It ties into stuff that’s a lot bigger than me. Mostly I’d have to say no, though. Barn people are a special kind of uncomplicated, for the most part. The ones I get along with, anyway. I’ve known a lot of people who’d say the worst bigoted things and then take it all back the instant I pressed them on it. Most people aren’t as bad as they talk. They just pick up on some bad ideas in this environment we’re in, and won’t toss them out until you ask them to think it through. Until you make it their problem. Now that I’ve stopped worrying about being too complicated, I really enjoy being that problem for people.

A: Do you see the horse world as a safe space?

N: I’ve always felt like an outsider in horse communities. But it’s more of a class struggle than a gender one, in my case. I still don’t know how I ended up here. It was a freak accident. The chain of events that led to me getting my own horse started with me googling ‘local ranches’ and begging them for work because I had nine bucks in my bank account.

On the issue of gender, I think — most horse operations being run by Women Who Take No Sh*t — there was never really any hold-up for me. One of the main reasons I loved my first job at an equine vet clinic was because none of the working guys treated me any different. We did the same work. You don’t tell a 19 year old ‘girl’ who’s tossing hay bales with you in 105 degree heat that ‘she’s’ lesser. You just don’t.

But I always liked the work because it let me be that part of myself. All parts of myself. 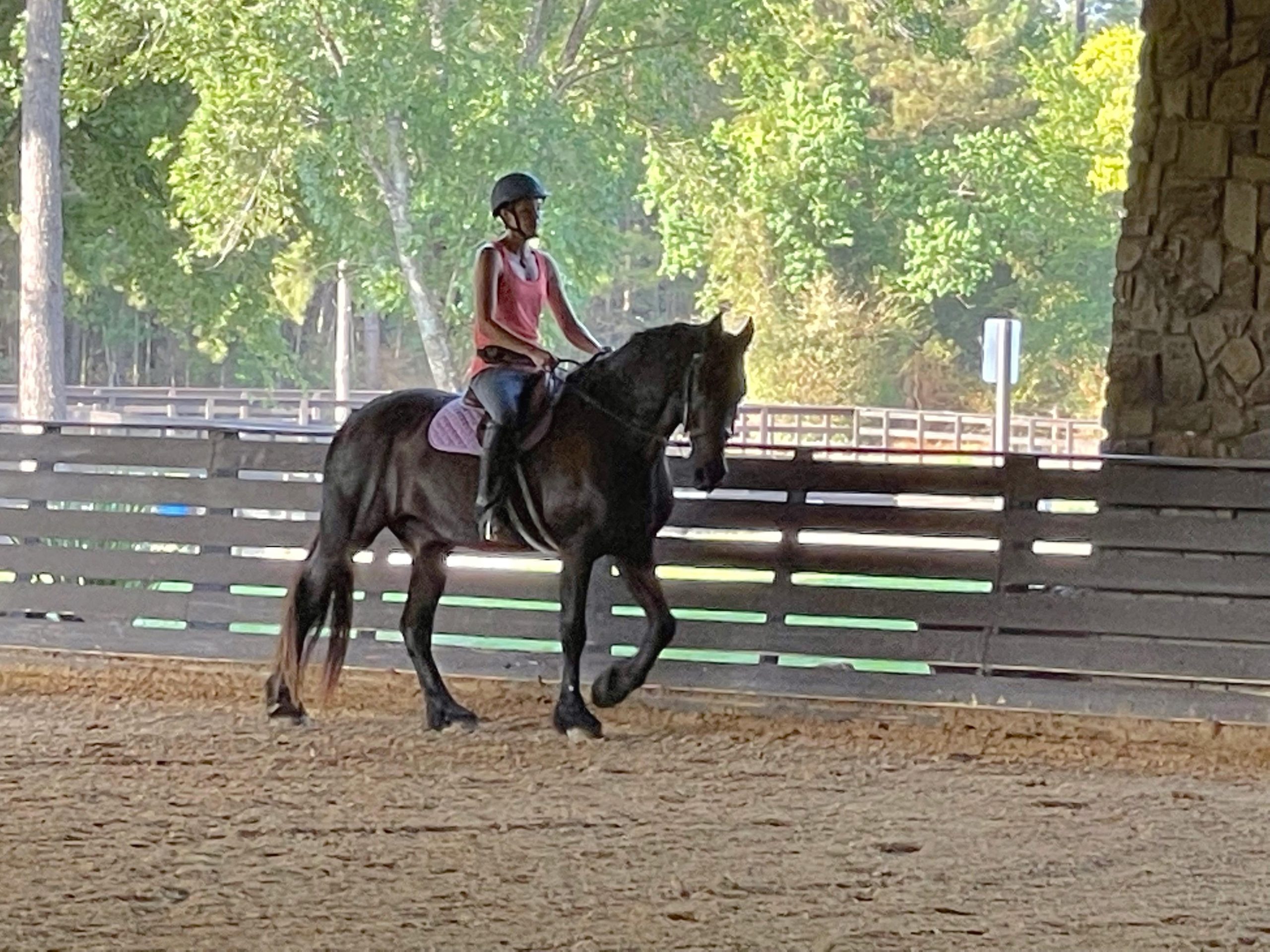 A: What would you like to tell LGBTQ+ equestrians who may be scared to be out in the horse world?

N: Don’t sweat it. Horses are so much more dangerous than homophobes and we push them around all day.

Okay, that’s the goofy response, but here’s a serious one: In the broader space of American politics, there are a lot of bigger dangers we’re facing. If you feel strong enough to live your truth and take a stand for freedoms that are very much under threat right now, the more the merrier.

Also, excuse me, where are you in my life? I need these LGBTQ+ equestrians to hurry up and find me. Every week I’m getting Tinder messages from straight dudes asking to ride my horse.

A: Okay, I love that response and I think that’s a perfect end to this chat. Thanks so much for joining us today!

N: You’re welcome. Thanks for having me.

Sunrise or sunset? Sunrise. I love the morning air.

Summer or winter? I am a summer child.