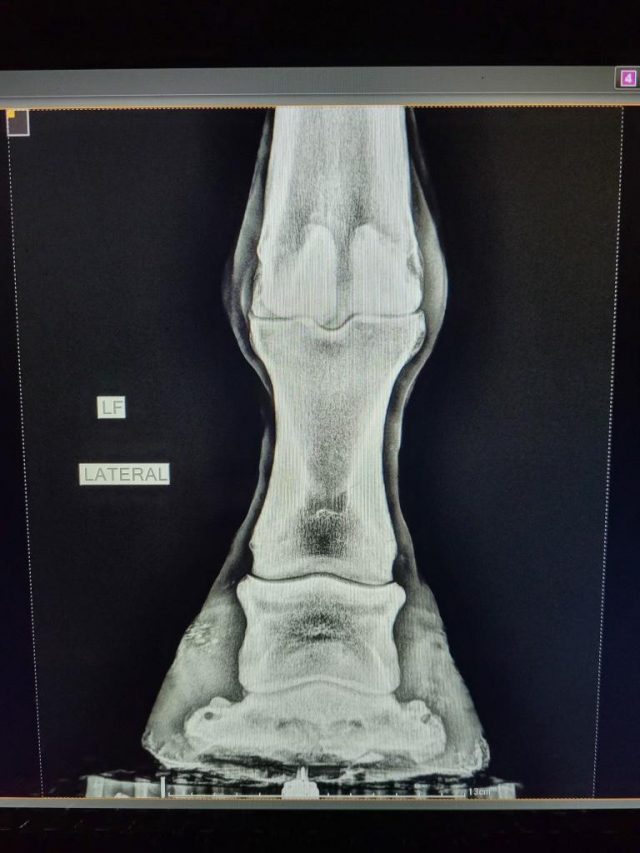 September 9, 2022Aubrey GrahamAubrey GrahamComments Off on Thoroughbred Logic, Presented by OTTB United: Get the Image

Welcome to the next installment of Thoroughbred Logic. In this weekly series, Anthropologist and trainer Aubrey Graham, of Kivu Sport Horses, will offer insight and training experience when it comes to working with Thoroughbreds (although much will apply to all breeds). This week ride along as Aubrey discusses her logic on doing x-rays, ultrasounds and scopes.

I think by this point in these articles, you regular readers have realized that I am a total nerd. If I can know more about something — about Thoroughbreds — I want the information.

I spent part of last night digging through a potential new sale horse’s race cards on Equibase. I was on the same site the night before that looking for hints of a potential injury in another. I watch — watch their paddock interactions, watch their footfalls, watch which leg they rest in their stalls. Living in the barn (my apartment is right next to the stalls), I can hear changes in health and behavior, much to the chagrin of my sleep patterns. Yep, living, breathing horse nerd. 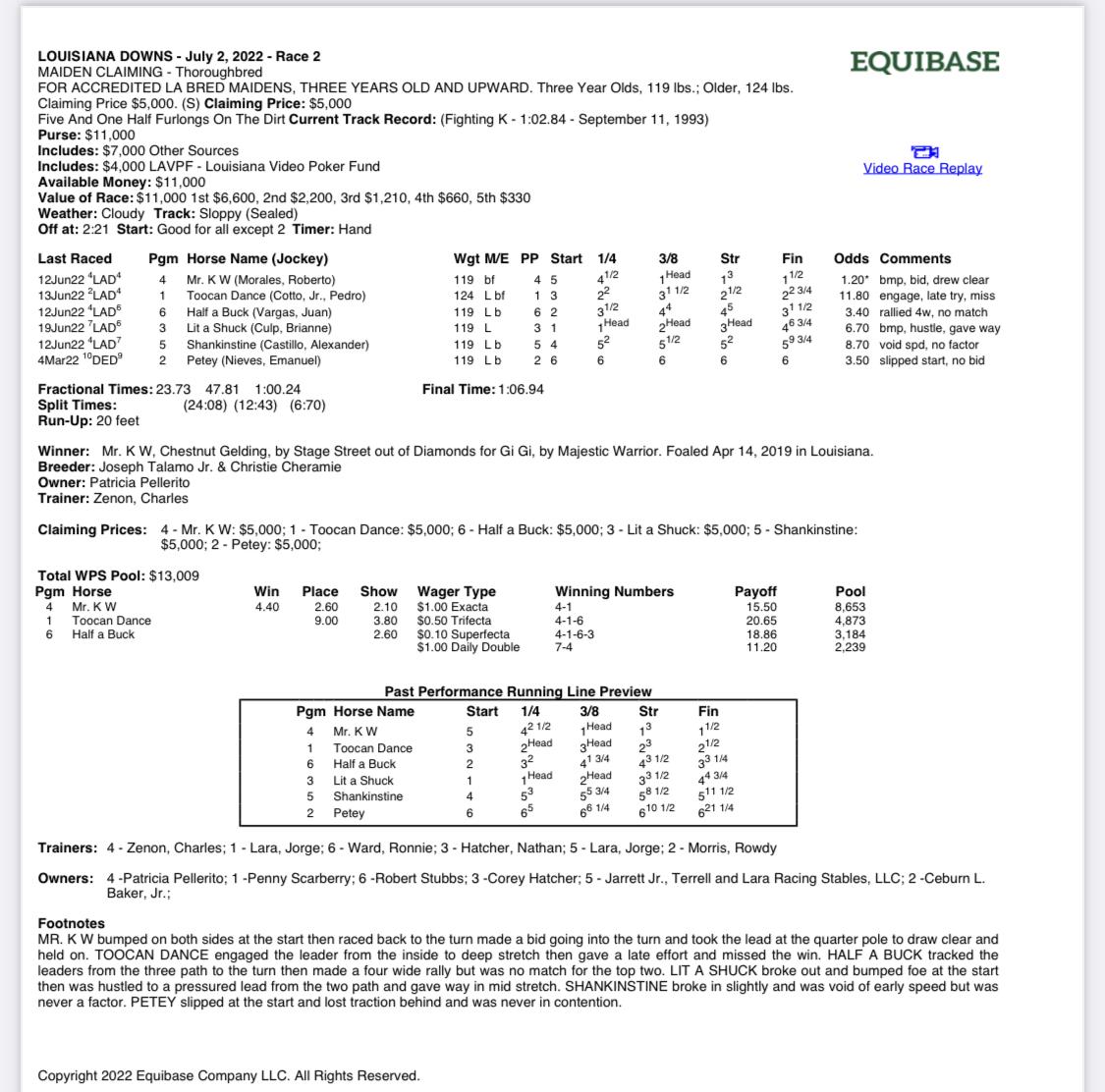 Screenshot of a recent Equibase race card I was recently perusing. Photo courtesy of author.

So when my vet comes out to scope, to take radiographs, ultrasound, or to do a routine lameness exam, I become a sponge. I might not be able to see things the way their eyes do, but I’m getting better at recognizing problems on common X-rays (hoof, hock, knees, ankles), identifying proper healing in ligaments and tendons, and reading gastroscopes. Being able to see this stuff in real-time and learn is pretty kick ass. It makes my nerd brain happy. 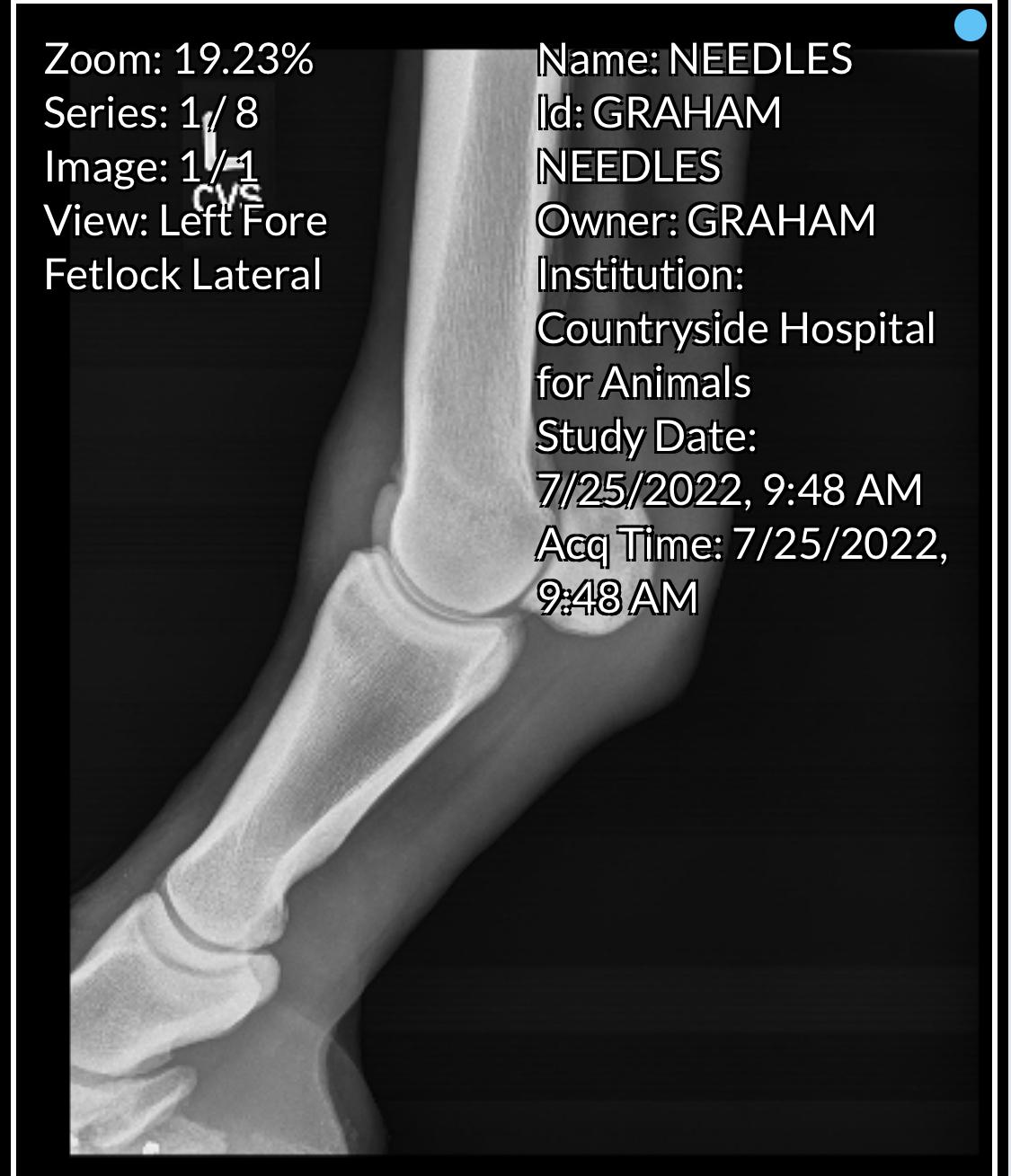 Needles Highway’s recent X-rays to locate the position of a chip. His rads were positive and showed one chip (not featured here) but no need to remove it immediately. Image courtesy of Countryside Equine.

More importantly though, being present as vets bring internal equine data to light has made me realize just how complicated these creatures can be. See, such images are important for what they say about what the problem is… and equally, for what they say about what it is not. I can’t tell you how many times information from veterinary images has changed the expected treatment plan, or how many times I have said, “Wow, I’m glad we got the ____” (radiographs, ultrasounds, bone scan, gastroscope, etc).

Ulcers are a common example. Yes, Thoroughbreds are prone the ulcers and the anxiety and high stress that contributes to them. For some, you can spot them from a mile a way — increasingly grumpy behavior, acting out under saddle, a dull coat, and poop that truly stinks. But we have had enough weird cases in this barn that when treating them is a priority, I get the images if I can.

Rhodie (Western Ridge) has been a challenging dragon to figure out. He is as talented as he is opinionated and as such, rides occasionally become borderline dangerous. When his usually-reactive temper got worse in late Spring, and riding felt like attempts at defensive driving in a demolition derby, I booked an appointment to get him scoped. I won’t lie, I expected a sizable GastroGuard bill and some pictures of a huge mess of ulcers. All we found was a very mild case of hypokeritosis and two bot flies (gross). Had I not gotten the images, I would have treated an imaginary case of ulcers and easily wasted nearly a thousand dollars on what was solved with a 14$ tube of wormer. 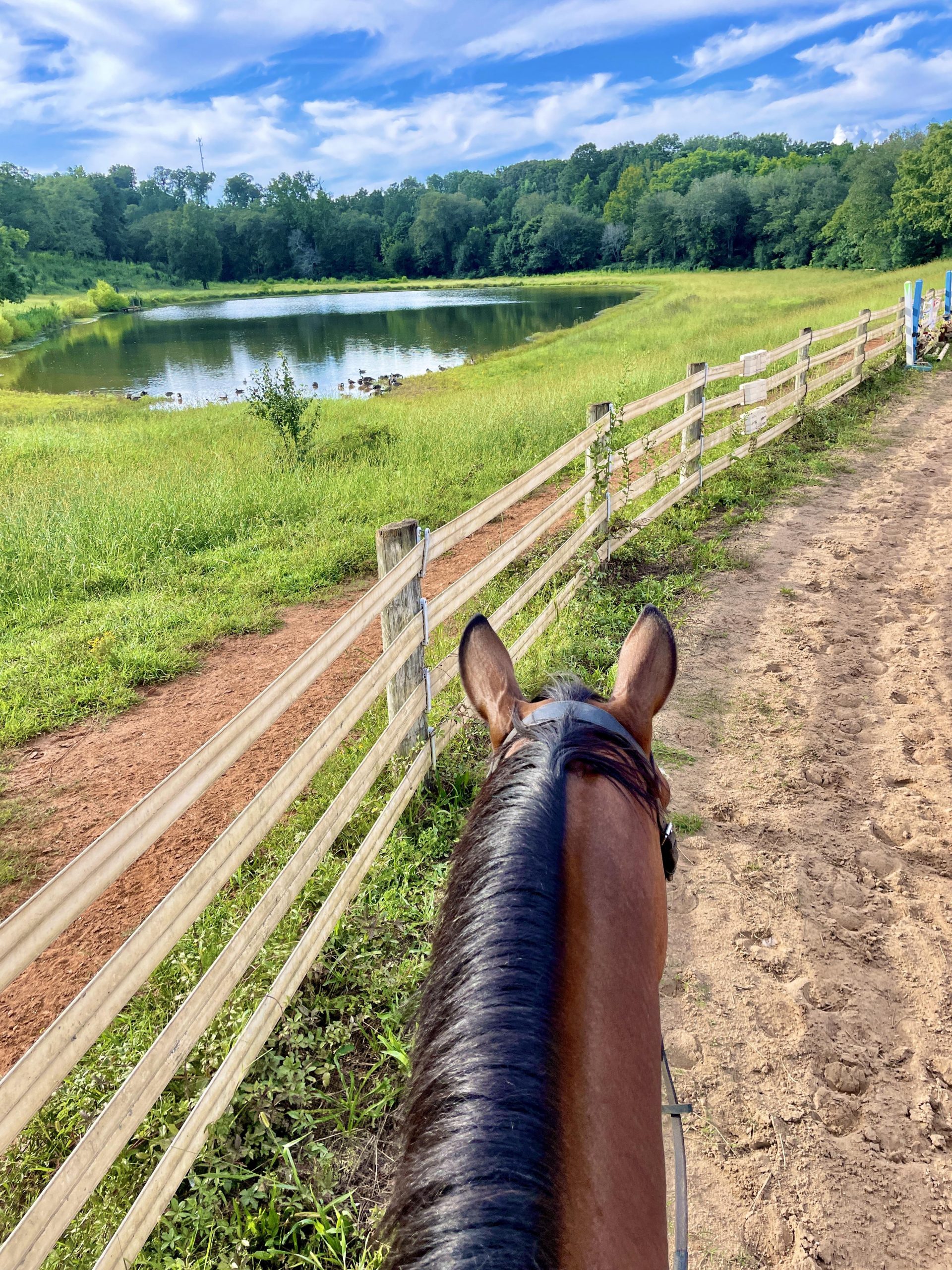 Post wormer, Rhodie is back to work and starting to feel pretty good. Photo by author.

On the flip side, we have had horses come in with stomachs that look like they have been through the meat grinder. Juice (JC Pulpituity) needed 90-days of GastroGuard for his ulcers to resolve and we scoped four times (thank goodness he was insured). Had I treated without scoping, I would have stopped at 30 days and been stymied by ongoing issues. For others, the location of their ulcers shaped the prescription. Without the image, it becomes educated guesswork.

The same goes for radiographing unsound joints and ultrasounding puffy tendons and ligaments. I have had images and vet reports that confirmed what I suspected/hoped (please just be a broken bone, not a ligament  injury — it was thankfully just the bone); and others that were devastating — like when Juice’s former suspensory cluster f*&$ reared its ugly head again and took him out of the riding game entirely. Or when Mountain’s foot rads showed that he was pretty much standing with his coffin bone touching the ground. In each of those cases, knowing the actual cause, location, and severity of the issue led to being able to put together a clear and appropriate treatment plan. That has been game changing. 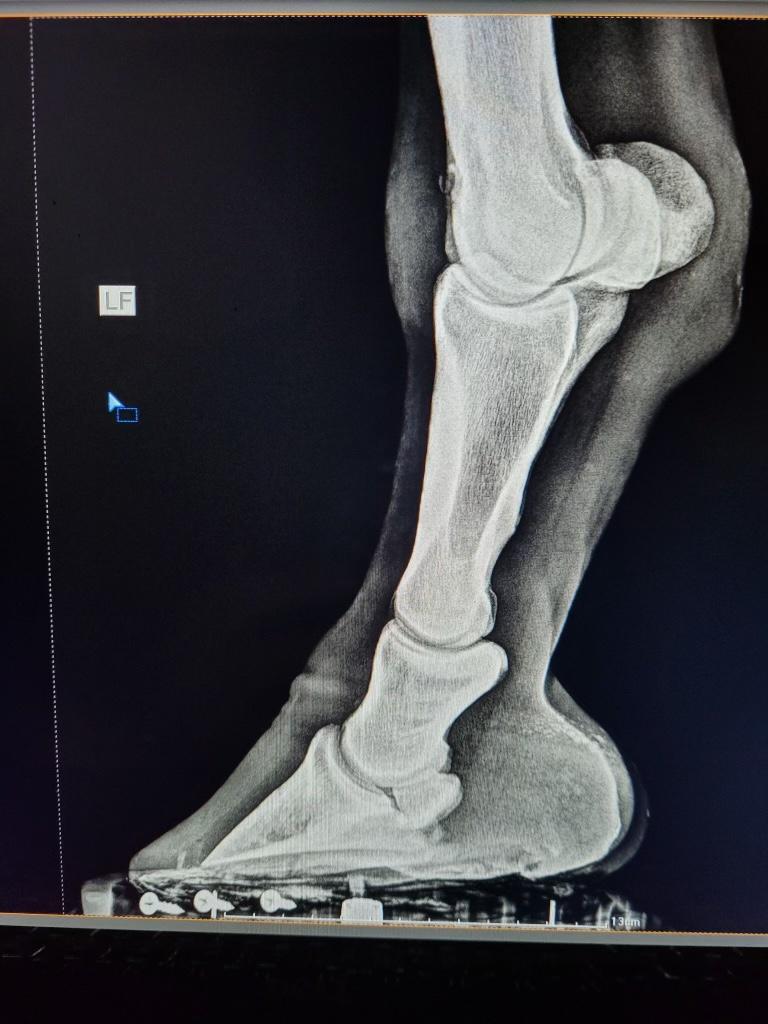 Following in that vein, in a week, I will be getting radiographs of Tuck (Louisiana Bling)’s back and hind end. I am not thrilled about this, as honestly, ignorance is bliss. But he is still tight and not 100-percent behind. I could wait it out another six months and hope it’s just muscular. That said, I know that if the rads are clear, I’ll feel better about the path we’re taking. If they’re not… and he needs something else… then I get to start stuffing dollars in the piggy bank to make sure he gets what will make him the most right, sound, and happy. 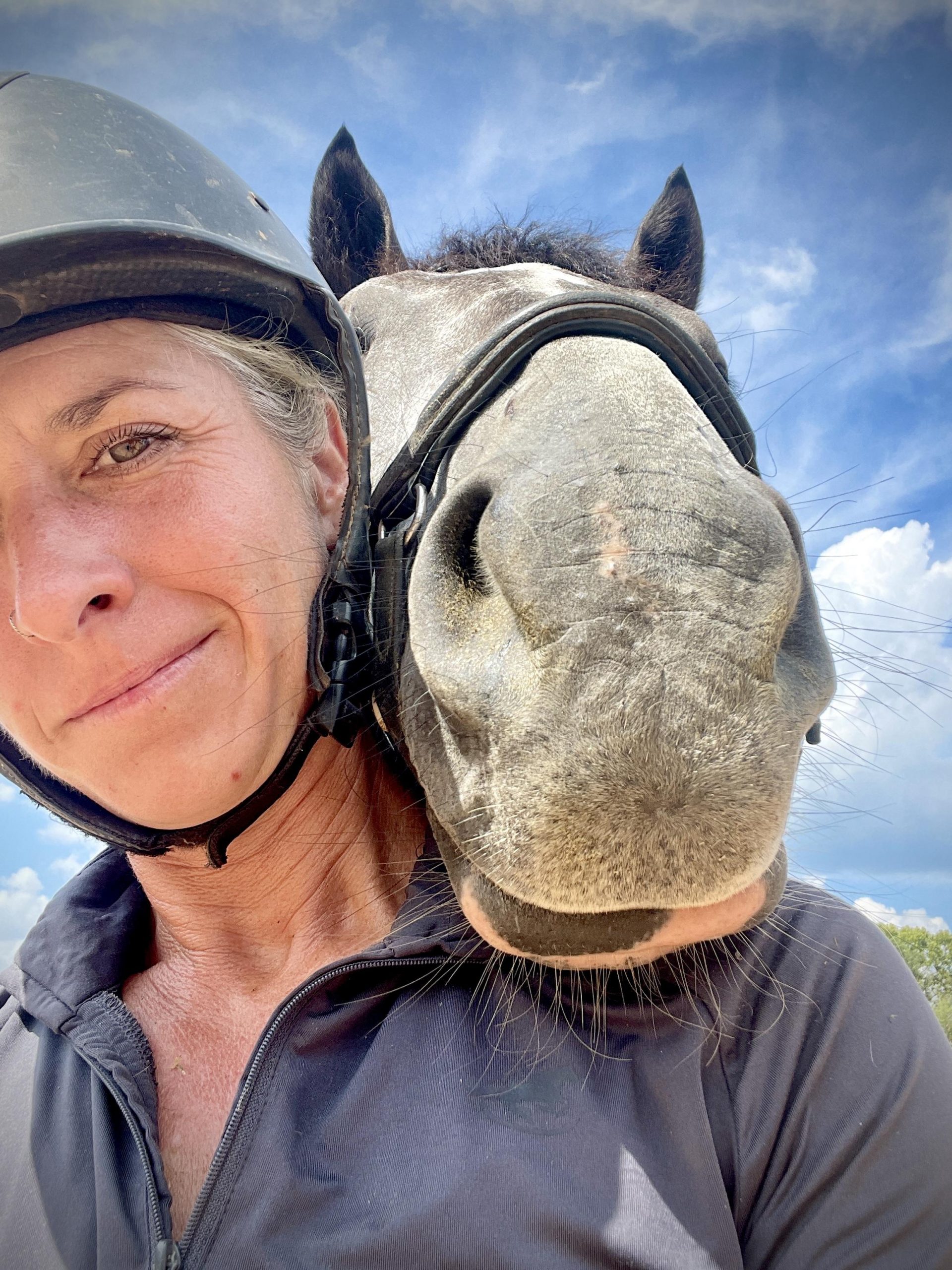 It is a good thing Tuck is cute. Photo by author.

Let me caveat and conclude by saying that at this point, when I get my horses off the track, I generally do not do a Pre Purchase Exam. I will get aberrant things (like old osselets or a funky ankle) radiographed to make sure the horse is ready for a second career, but I don’t properly “vet” (I can talk about this in another article). That said, PPE images do produce good knowledge and act as amazing reference-points for other sets of x-rays when you need them later down the road. Being realistic about budgets, though, I end up prioritizing getting the needed images when I think something is not right. Hell, horses can be sound and successful with gnarly looking legs and joints. I let them dictate when they need visual investigation of what is below the skin. At that point though, I go for the knowledge and get the image.

Thoroughbred Logic is proud to be supported by OTTB United, the premier virtual marketplace for retired racehorses built by equestrians, for equestrians. The OTTB United app unites organizations, buyers, sellers, and trainers in one interface. Download the app and give it a whirl by clicking/tapping the banner below!