Out of the Wild tells the story of a down-on-his-luck cowboy and a wild Mustang. I watched it and I think you’ll want to. 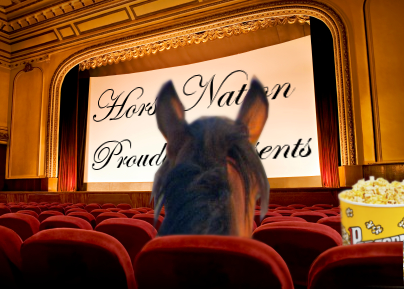 Penned by natural horsemanship practitioner, Mark Rashid, and based on a true story, Out of the Wild took top honors at the 2016 Equus Film Festival. Let’s break it down in this (mostly) spoiler-free review.

“Living on his last dollar, a down and out cowboy ends up working the last place an old cowboy wants to be: A dude ranch. It is here he meets the owner, a no-nonsense rancher with a deep love for horses. McBride’s self-discovery begins when she introduces him to a new way of training a troubled mustang, a horse whose past and temperament mirror his own.”

The movie opens with our protagonist Henry in a very dark place. Both literally, because it was filmed at night, and metaphorically, because he’s dead drunk and stumbling around in the desert. It’s inferred that he’s an alcoholic, homeless and unemployed.

Fate pushes him toward the dude ranch of Jessie King, a character I almost immediately know I not only like … but also would love to have a glass of wine with in real life.

Jessie has a soft spot for charity cases, though, so she offers him a job. The work isn’t glamorous — in fact, it looks a bit humiliating — but at least it’s honest.

Next we meet the ranch foreman, Chad. He wears misogyny like a musk, abuses horses on the regular, treats his employees horrendously, and wears chaps and spurs all the time. Like … all the time … in every scene he has in the movie. Totally unnecessary, Chad.

Chad and Henry do not get along, and after a few too many incidents, Jessie fires Chad and promotes Henry. Equal parts spurned and entitled, Chad tracks Henry down at a local dive bar and assaults him. Henry hides the encounter from Jessie and carries on with work at the ranch even though it’s clear he needs medical attention.

Meanwhile, I’ve met the third member of mine and Jessie’s wine club.

Finally, we meet our untamable mustang, who almost instantly has a mystical moon magic connection with Henry.

Time passes, the dude ranch shuts down for the winter, Chad continues to lurk around town, seething with anger, while Henry and Jessie become genuine friends. As they get closer, we discover Henry is haunted by the death of his wife and son.

Can Jessie save the man and the horse? Will Chad continue to fester like a bad rash? You’ll just have to watch and see!

This movie is slow and meditative, but also raw in a very powerful way. It certainly doesn’t shy away from the harshness of alcoholism and trauma.

John Diehl, playing Henry, and Jean Louisa Kelly, portraying Jessie, are superb in their roles. Even though riding scenes weren’t overly featured in the film, the actors still had an ease around the horses that seemed natural and, despite their 22 year age difference, just enough on-screen chemistry to make the love story believable.

Filmed outside Las Vegas, Nevada, at Cowboy Trail Rides, the setting is also gorgeous. There are rolling vistas and gorgeous sunsets for days. If you’re so inclined, you can even book a trail ride where most of the filming took place.

Some elements of the story did seem only partially explored — like the adorable friendship between the young, stuttering ranch hand and Jessie — but I know the film is based on a book by the same name, so I assume smaller side stories had to be cut in order to make the film’s 90-minute runtime. My only other complaint is the quiet, almost mumbling, tone Diehl chose for Henry’s voice. I actually had to turn on closed captioning to fully understand him.

I should also post a warning that there are several depictions of brutal physical assault, obscenities spoken and a suicide attempt. So, this might not be a flick for the whole family.

I give Out of the Wild 3 out of 4 Golden Horseshoes.