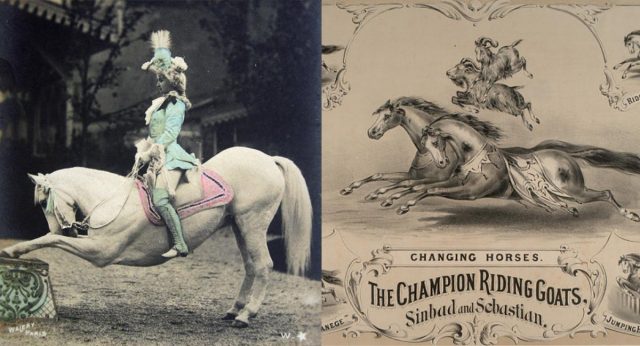 We journeyed back to take a peek behind the curtain of the greatest shows on earth, but the big top still has its mysteries. 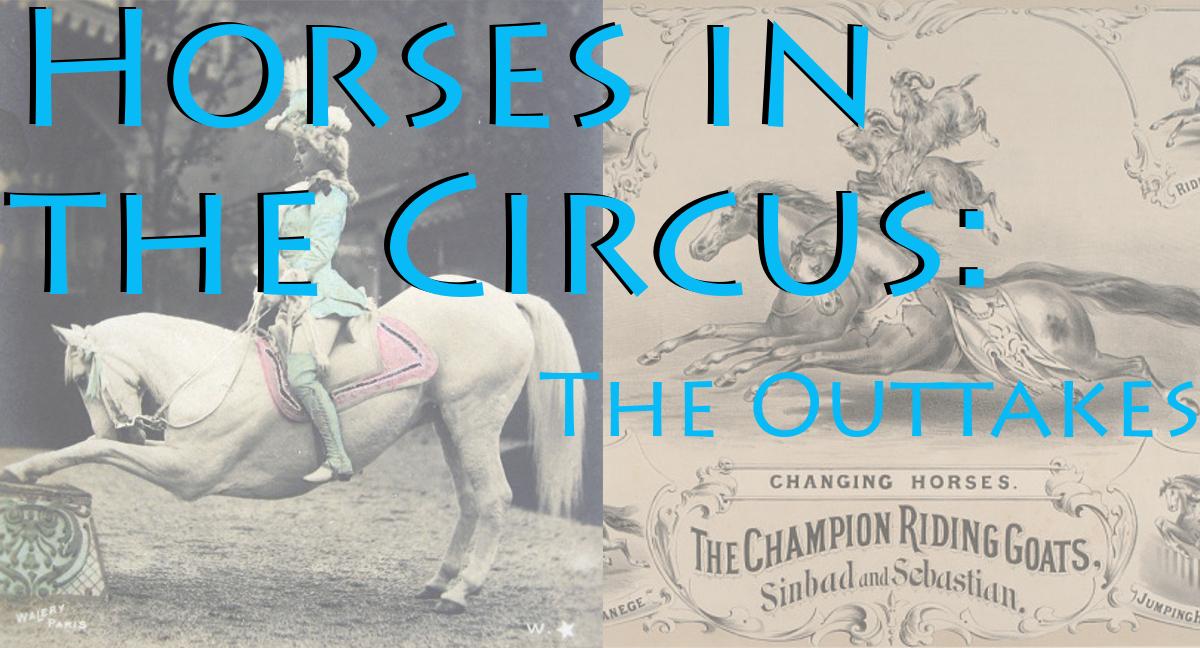 I always laugh when I tell people that professionally, I fall down rabbit holes. No one wants to read about the same historical figure or facts that they’ve read about a thousand times. We want to learn something new, something weird, something strange — which inevitably means I do a lot of digging on obscure subjects. Occasionally, though, the search is fruitless and I’m left with more questions than answers. Here are a few “Horses in the Circus” mysteries that eluded me.

My research on 18th and 19th Century circuses started with a single advertisement spotted while digging through the Smithsonian archives. 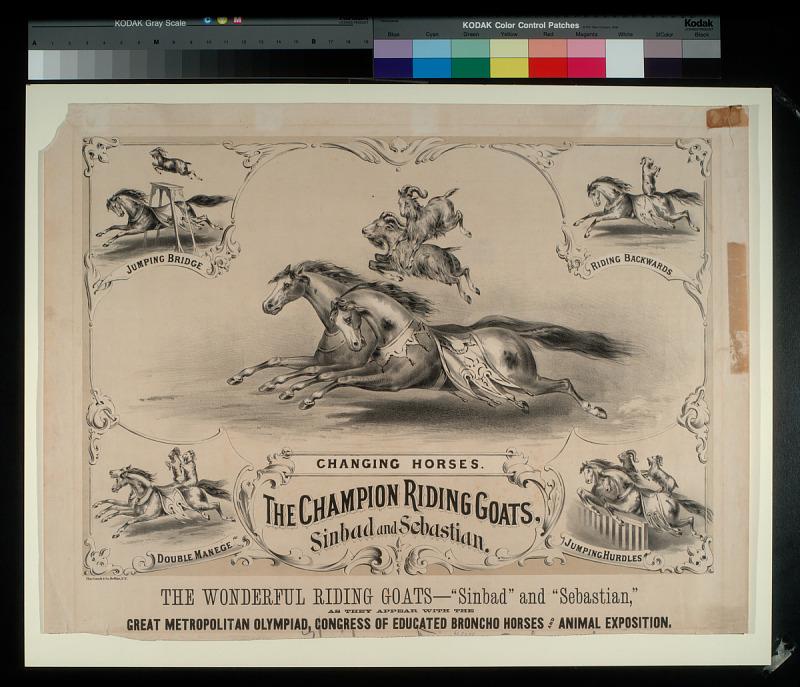 Unfortunately, I was never able to find any more information about the infamous “Sinbad” and “Sebastian” other than the information listed with the photo.

It reads: “Black and white (with tinting) advertising print of two goats riding horses. There is a large view in the center of the goats changing horses as they ride and four smaller ones in each corner of the print showing the goats performing alone and together.”

Note from the author: I regrettably did find lots of information, photos and even videos — which implies it is still occurring — with lions, bears, monkeys and other animals strapped to horses for performances. One video clearly showed both a horse and bear in obvious distress. I veered away from the uglier side of “circus life” for this series, but common sense dictates this sort of forced performance is morally wrong. As such, dozens of countries and U.S. states have banned the use of live animals in circuses, and it was recently announced that the Ringling Bros. is set to relaunch without animals.

I found a single source that listed a Countess Anna Ugarte, who — after a nasty divorce from a spurned and, apparently, “diminutively statured” man — ran away with the circus to practice classical dressage. The tale gets even juicier when you realize she and her ex were related to two royals — the Crown Prince of Austria and a Baroness (the prince’s mistress) — who committed murder-suicide at a hunting lodge in Mayerling. After the ensuing scandal and her divorce, Anna apparently alternated between circus performances in Paris and hunting in Leicestershire. It was there that she reportedly “shot herself through the heart in Melton Mowbray in 1901.”

Sadly, none of the original links were functional on the article I found, so none of this could be verified, but what a story. 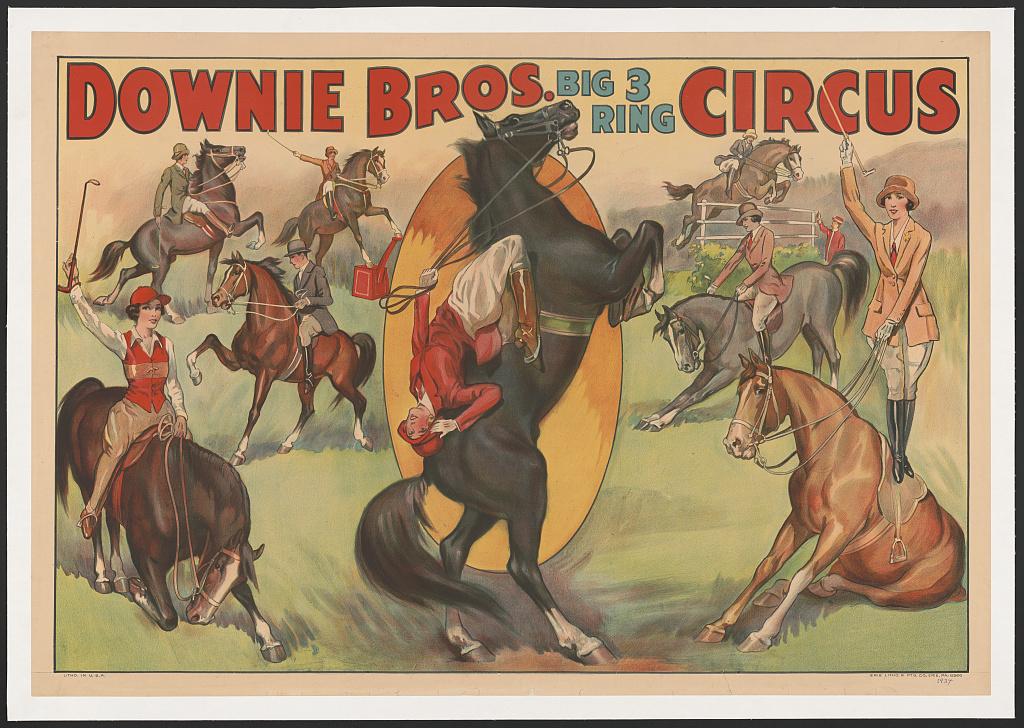 Pictures Worth a Thousand Words

Most of the research for this series was painfully frustrating because the women of this era kept their identities a secret. Many were escaping poverty, abusive families, bad marriages, and, in general, a society that thought women shouldn’t ride and train horses. When they ran away to the circus, they reinvented themselves. And when they left the circus, their stories were lost and only their pictures remained.

I encourage everyone, if you have a few spare moments, to dig through the Smithsonian archives, the Library of Congress and anywhere else on this wonderful thing we call the world wide web. Fall down a rabbit hole. Otherwise, you might just miss fantastic images like this one of “Mademoiselle Marville.” 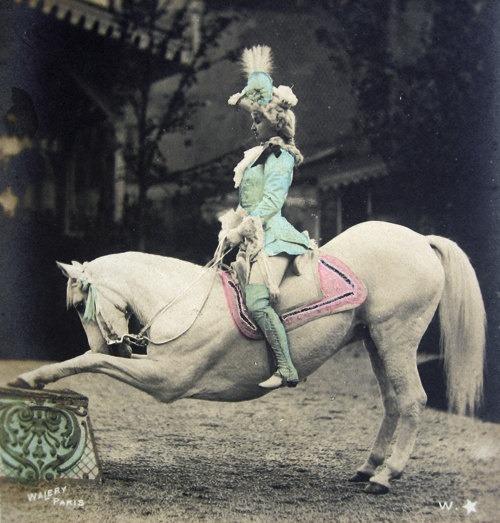 Hand tinted French photo postcard of a lady circus artist (Mademoiselle Marville) on her horse. She performed at the Moulin Rouge in Paris the Belle Epoque era (1900-1905). Photographer: Walery, Paris