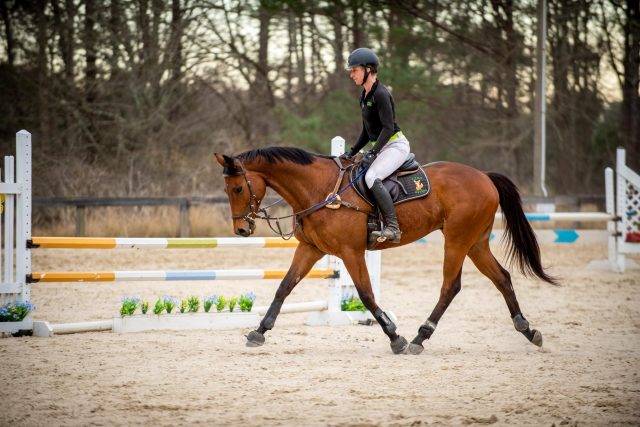 “…with patience, a healthy dose of good equitation and amply honed ‘ignoring’ skills, it usually doesn’t take too long before their natural desire and ability to work over their back begins show.”

Welcome to the next installment of Thoroughbred Logic. In this weekly series, Anthropologist and trainer Aubrey Graham, of Kivu Sport Horses, will offer insight and training experience when it comes to working with Thoroughbreds (although much will apply to all breeds). Come along for the ride as she offers her logic on ignoring the weird stuff and rewarding the good.

If you look at sale ads for off-track Thoroughbreds, you could be encouraged to think that from ride one, the majority of these horses carry themselves perfectly up over their backs, seeking connection with the bit. Truth is, most of them can – but not all of them do so immediately. Part of that depends on the horse, part on the rider, and part on one’s video editing skills. 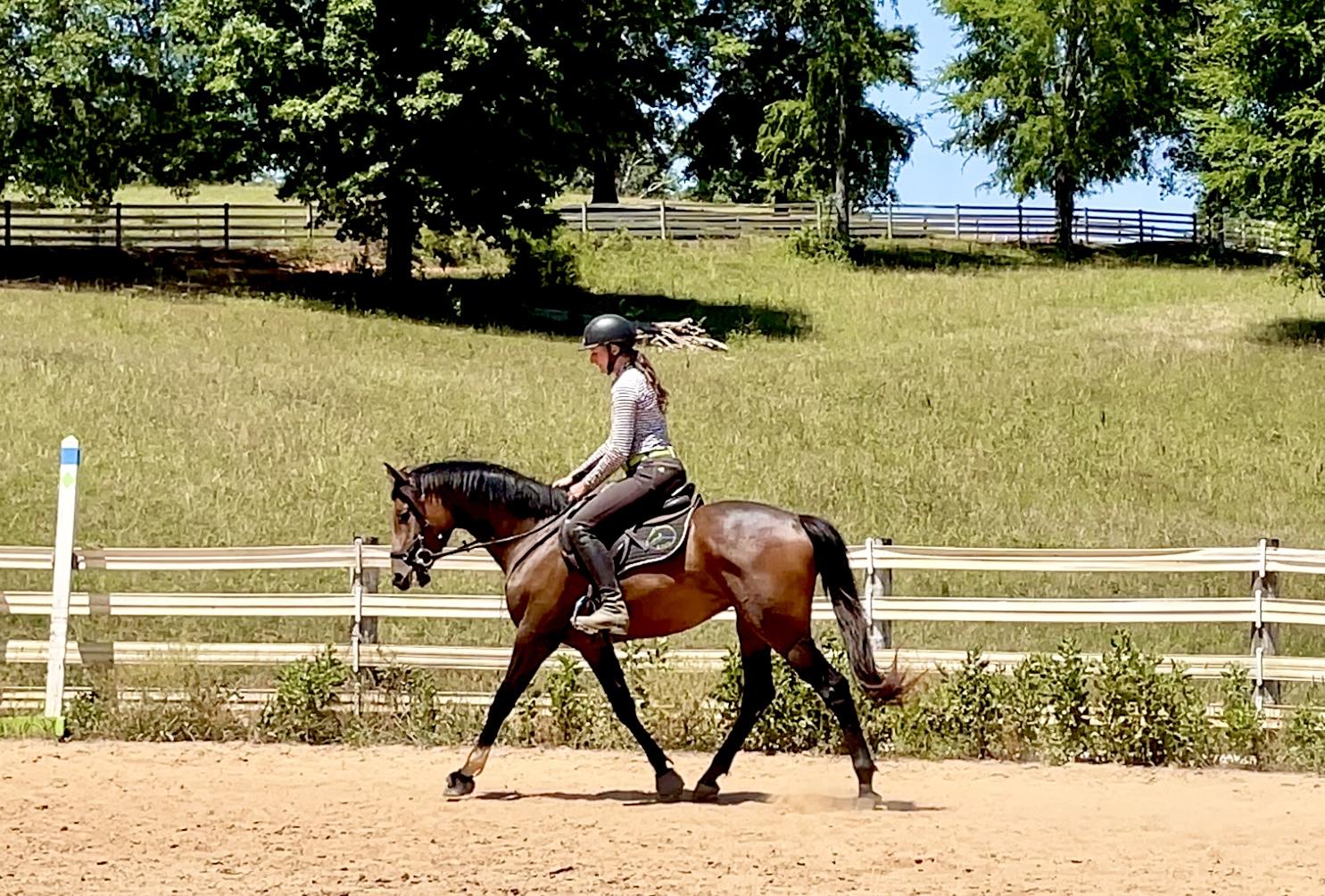 A still frame from Aspenfiveoneseven’s first ride post track. He CAN make this shape, but he didn’t hold it for long. Screen capture by Amanda Woomer.

When hopping on a green Thoroughbred early in their retraining process, one gets a range of responses. Some make the transition from track to show look easy. These are the golden children. They push from their hind ends, stay soft in the bridle and often do all of that from day one. They might have issues or be complicated down the line (ahem, Rhodie), but that first ride? They show off and make it all look like a cake walk. Mind, these golden children are still green, but they have a momentary leg-up on the competition – they LOOK composed. 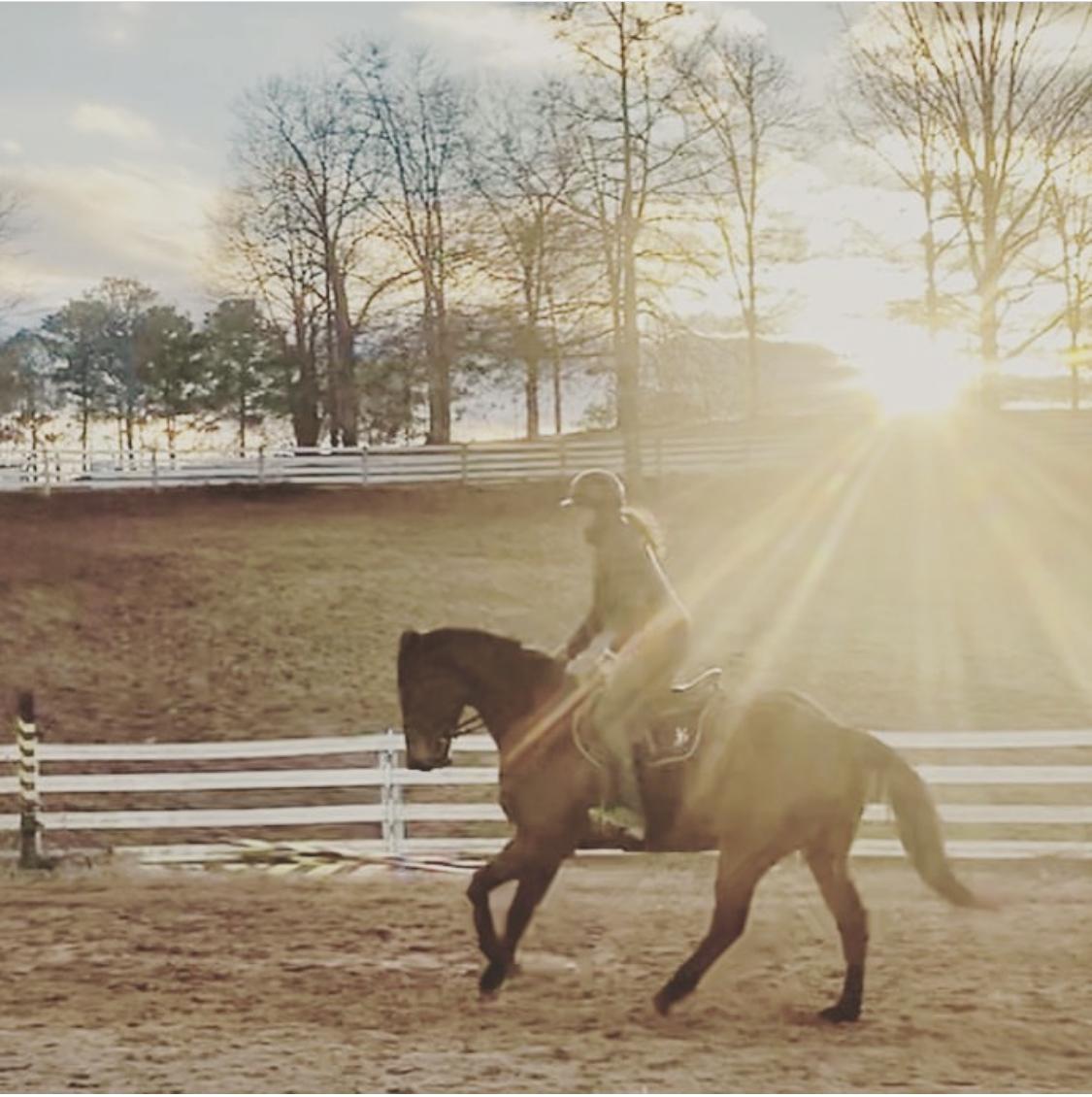 Rhodie (Western Ridge) came out for his first post track ride in 2021, balanced and round and a temporary golden child. Photo courtesy of author.

Then there are the OTTBs who come out for a first go round and simply don’t look like the horse in all the ads. They answer the tack (and rider weight) change and their sometimes track tight bodies with a choppy trot that avoids their back. Frequently, they might also decide to stick their nose straight in the air… or headbang… or head-tilt… or drag down… you name it, they’ll give it a go. These goobers at best take patience and a good laugh. At worst, entice a solid questioning of life choices and encourage one to brush up on their editing skills for undersaddle video until things are more sorted.

And just as the golden children aren’t free from vices and developing unsavory habits down the road, the choppy-trot-giraffes are also not locked into the realm of the hopelessness. Far from it, actually. But developing these kids — the ones who need a bit more direction, “go forward,” and relaxation — takes patience, humor, and a skill so extremely important to riders of Thoroughbreds (or any hot/sensitive/quirky horse)… the ability to patently ignore them. 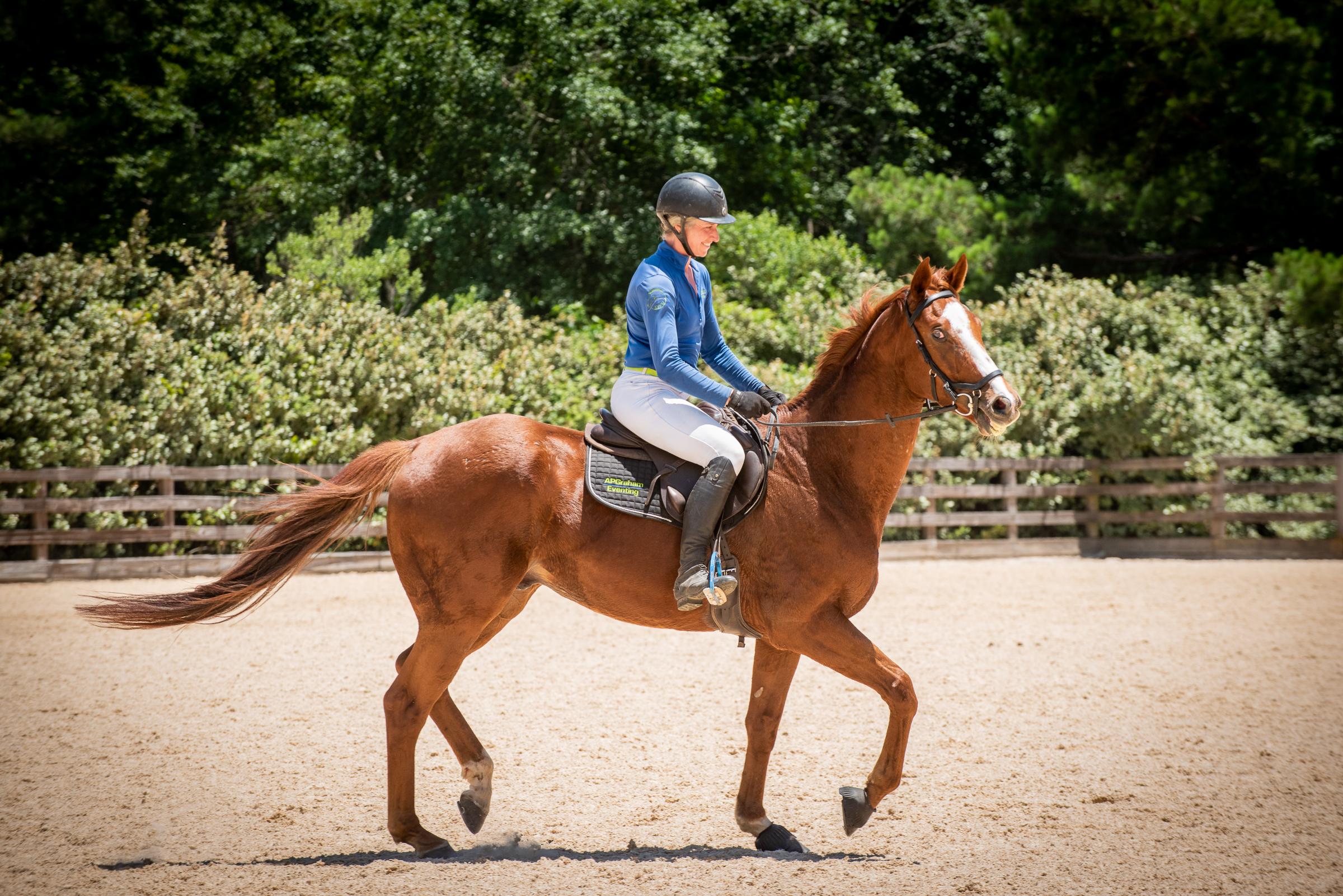 Beans (Giant’s Gateway) came out for his 6th post-track ride and schooled at Poplar Place Farm. His giraffe aesthetic dissolved after a few minutes, but there was definitely a lot of ignoring that had to be done first. Photo by Cora Williamson.

Quick disclaimer before carrying on: Ignoring fussiness and tightness to gain relaxation will only work if the horse is not in pain. It is super important to ensure that the horse is up to date on proper farrier work, dentals and is not responding as such due to pain, tightness, or lameness. But if all boxes are checked, and the horse appears “normal-ish,” then instead of see-sawing their face, pulling down, or generally getting frustrated, one can get a horse to look like the expected image through good equitation and not taking their bait — AKA just ignore them (it might take a while, but I promise it does work).

Just a handful of days back a friend commented on how I’m always happy while the horses under me are doing all sorts of things that usually would have folks running through a litany of four letter words. I laughed and pointed out that a) I probably am cursing (just quietly) b) I only smile like a fool on them when things are going south  c) There’s always a plan and it usually goes like this: “ignore them and kick on.”

Here’s that way through and forward in a bit more detail (there are of course thousands of other ways): ignore unsavory behavior, sit up, provide a soft seat and light but steady contact with hands above the neck, let them go forward (or make them go forward) and add inside leg into outside hand on a sizable circle. By focusing on the rhythm (especially of their hind feet) and holding a gentle bend, you can ignore everything that happens from the wither forward.  There are of course lots of other ways to do this – but when done with ample praise, correctly timed releases, and without drilling, this not only works to nix the annoying habits, but also helps to soften and improve the trot and self carriage — even on those horses who initially parade as giraffes. 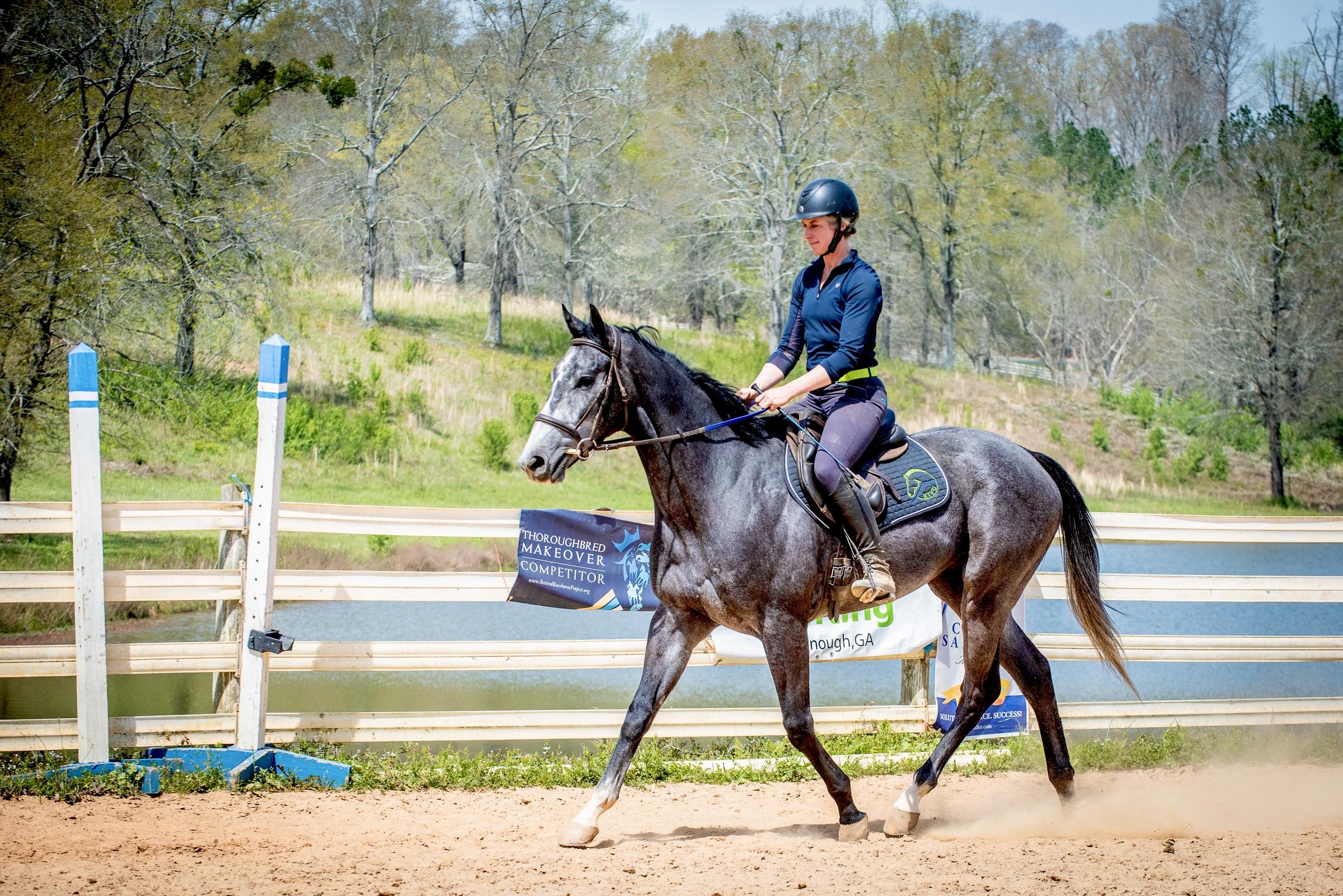 Tuck (Louisiana Bling)’s first ride showed that he was track tight and struggling to come over his back. Photo by Kelly Robison. 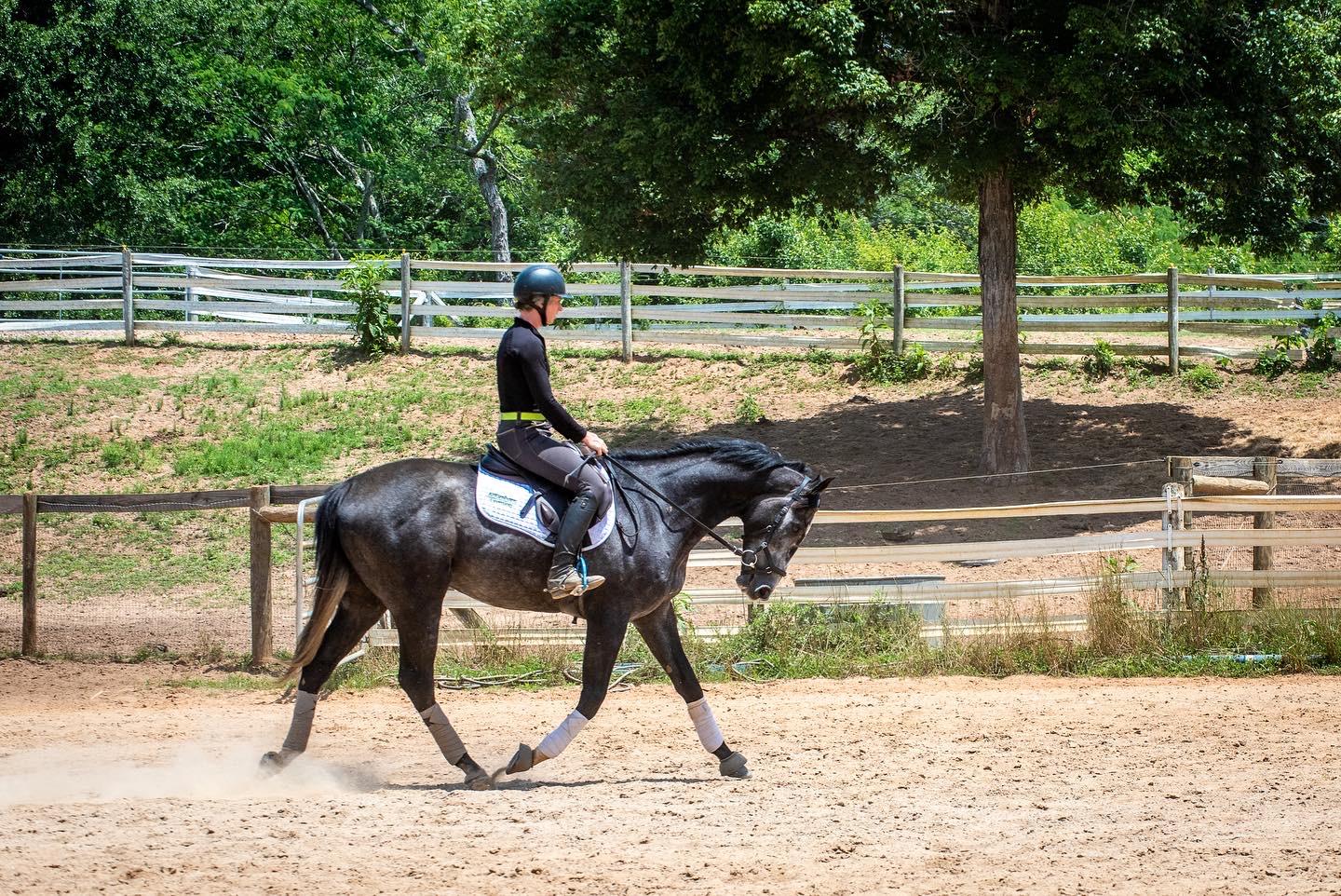 By his fifth ride, and lots of ignoring where he held his head, Tuck had turned into a much more picture-perfect mount. Photo by Kelly Robison.

Tuck (Louisiana Bling), featured above, provides a quality visual of how this works. Beans (Giants Gateway 2018) and Rhodie (Western Ridge 2015) are perhaps even better examples, due to just how different they are. These two are half siblings – both foaled by the same dam (Delightful Ridge at Winchester Place Thoroughbreds). Rhodie is one of those golden children — a super well balanced plain bay with all the potential in the world but a hell of a dragon attitude. On Rhodie’s first post track ride, he felt like riding a barrel of gunpowder with a short fuse, but he was easy into contact and swung through his hind end from the first walk. 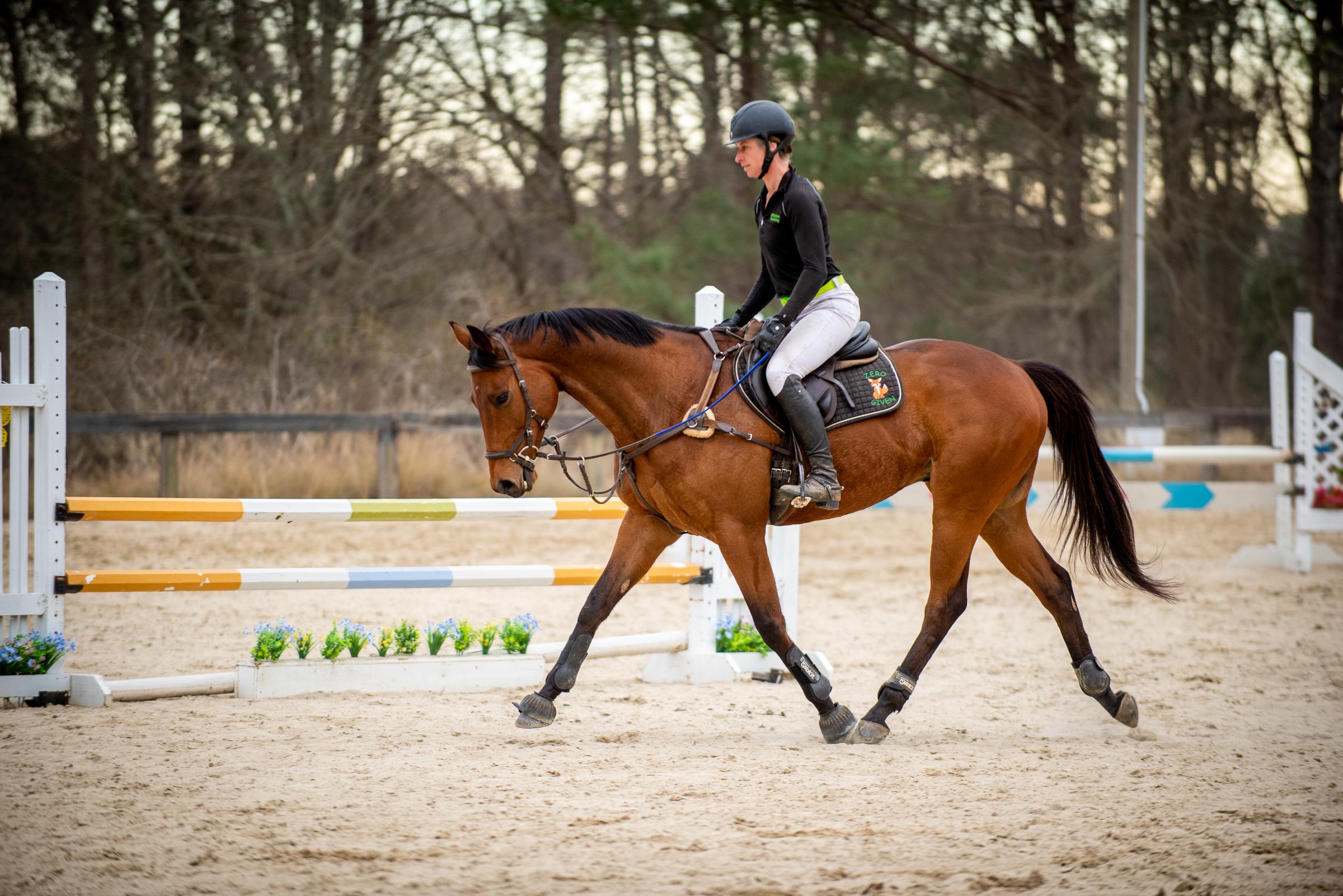 Rhodie being his usual balanced, round self. Photo by the Kivu Team.

Beans on the other hand is a sweet, cuddly, mid-growth spurt redhead who is extremely polite even while protesting. Beans is still very much learning where his feet go and how his front and rear ends connect. When first asked to trot, he made like a llama and pinged forward with his neck practically blocking my view. Over the past six rides, though, by simply aiming for a steady rhythm and a slight bend while ignoring any of Beans’ attempts to sort out where his head goes, he now spends most of the ride in a light, more-correct frame.

This was the case at Poplar last week. Still a tad too green to show, I schooled Beans cross country on Friday and then brought him out to school in the dressage arena at the end of the day on Saturday. With a 20 minute window, we walked, trotted, and cantered in circles in both directions, focused solely on his hind feet and their cadence. What began as a “wow, that one is a bit spicy” turned into, “well look at all of that potential.” The trot softened, and as my timer went off to run to coach the next phase, Beans had worked himself from a quick stepping giraffe, to a nice looking eventing prospect. 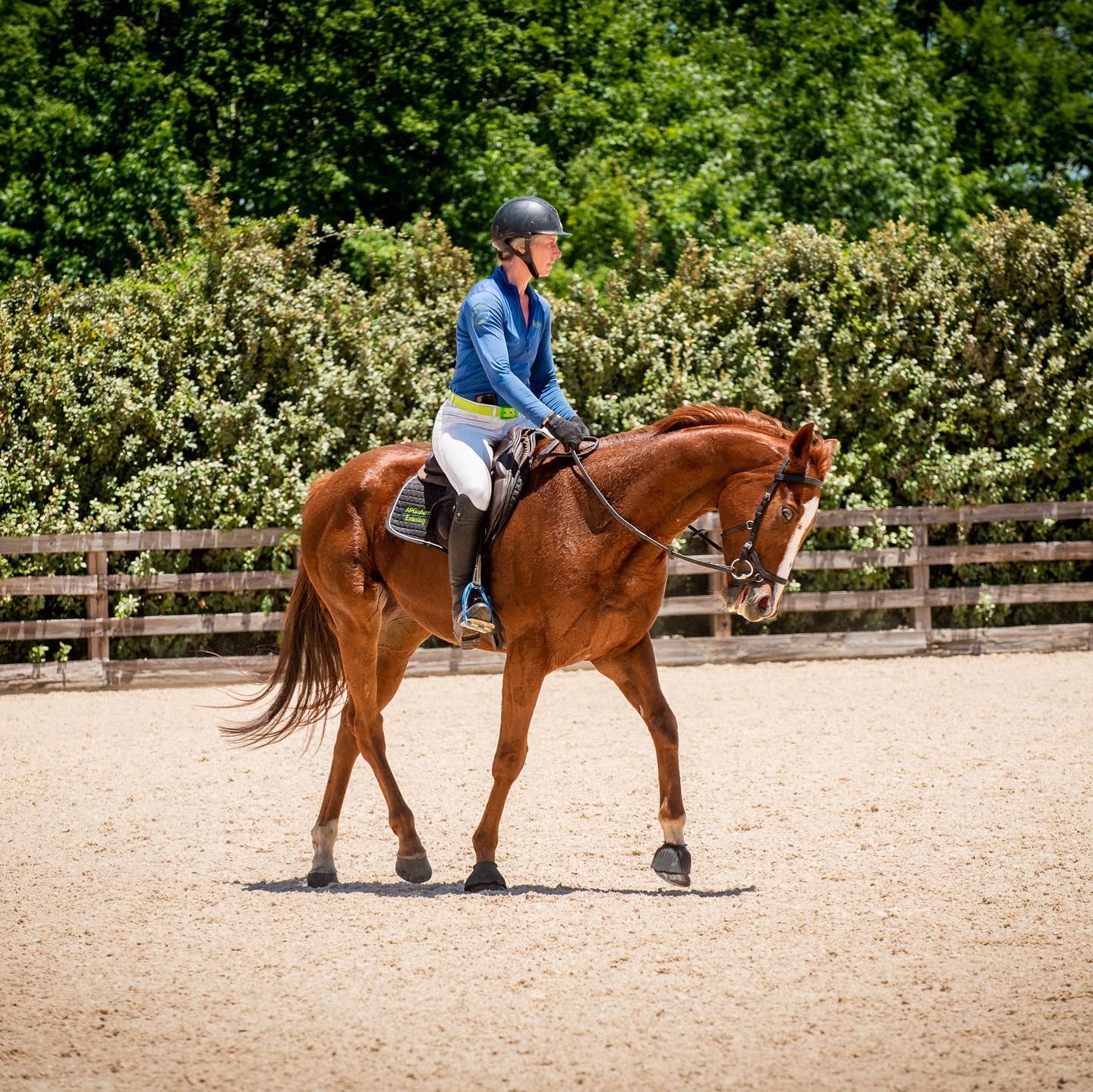 Beans making a solid effort at coming round and no longer acting like a llama, giraffe, ostrich or other upright-necked creature. Photo by Cora Williamson.

So, the take away? Not all of these horses are going to look like the perfect picture from ride one. And if they do even briefly, they might not be able to hold it for long. As far as I’m concerned, the time it takes and the antics they try with their front ends has little bearing on their potential as a well-balanced sport horse. That said, with patience, a healthy dose of good equitation and amply honed “ignoring” skills, it usually doesn’t take too long before their natural desire and ability to work over their back begins show. At that point, your giraffe photos are useful representations only as “look at where we started” images.

So for those not riding the sale-ad-photo-dream-horse kick on, ignore them, and find a way to swear or smile through the ridiculousness. I’d put money on you having a heck of a nice horse in there.