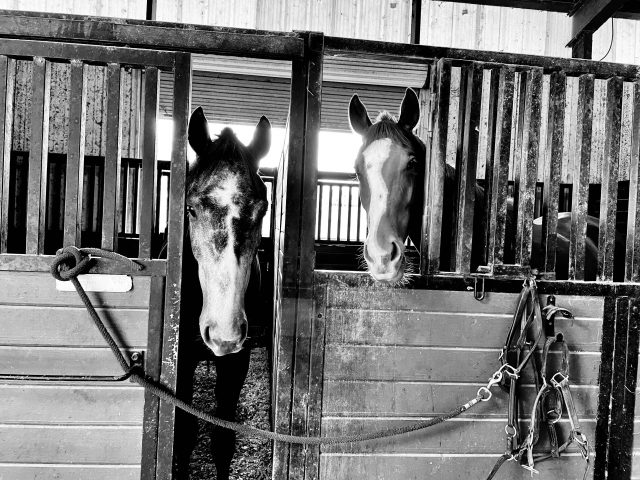 “In short, the better information one has, the more complete the story, the better a shot one has of not only training successfully, but also of fueling the horse’s desire to learn.”

Welcome to the next installment of Thoroughbred Logic. In this weekly series, Anthropologist and trainer Aubrey Graham, of Kivu Sport Horses, will offer insight and training experience when it comes to working with Thoroughbreds (although much will apply to all breeds). Come along for the ride as she offers her logic on getting the horse’s whole story.

The other day, my partner Shane and his hunting buddy, Durrell Smith, sat at my kitchen table. We had already been shooting the sh#t for a couple hours, but now Durrell, who runs The Sporting Life Notebook (check it out here), was on a roll. He grinned, “Okay then, what is the similarity between being an Anthropologist and training these Thoroughbreds?”

I spitballed an answer – crafting something only somewhat coherent about horses being individuals and having to engage each one in respect to their past and present. It wasn’t a good answer, but I worked it around to argue that a significant commonality between anthropology and training is how one has to listen, observe, participate, and engage so as to gather together myriad pieces of data in the pursuit of knowledge. In the case of horses, how each one is handled daily builds from that cobbled-together information, and, as such, it informs and shapes training. 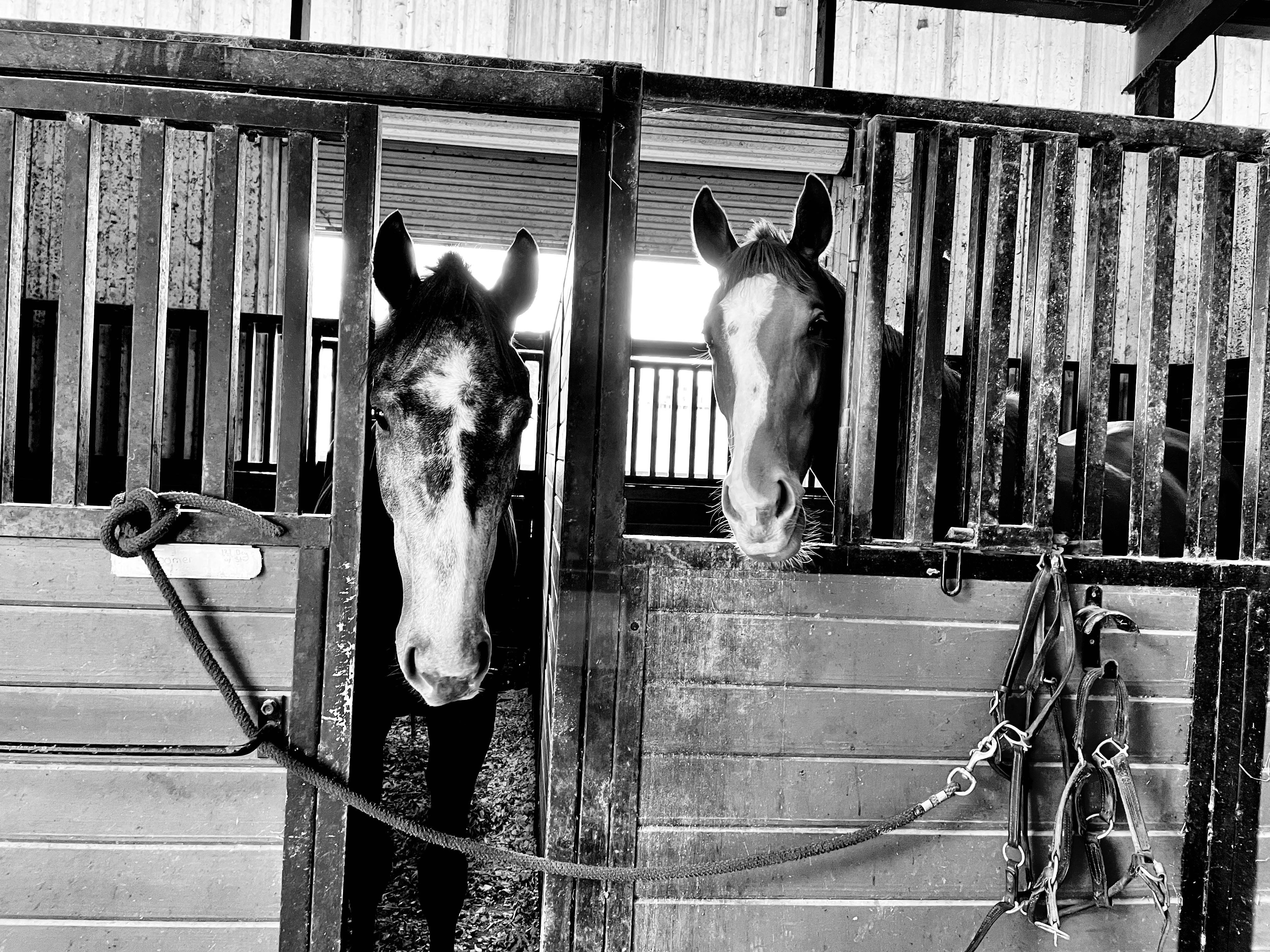 Beans (Giants Gateway – right) and Tuck (Louisiana Bling) are both four-year old off tracks with low starts, but the two could not be more different. Gathering a full story on their past and present makes tailored training plans possible. Photo by author.

In short, the better information one has, the more complete the story, the better a shot one has of not only training successfully, but also of fueling the horse’s desire to learn. This all circles back to last week’s post about being fair — about knowing the horse enough to know what is a reasonable ask, when to praise, when to push, and when to call it a day.

I joke that this barn is full of happy “scratch and dent and quirky” critters (most days that affectionately applies as much to the people as to the horses). Since I often take in green and sometimes “tough” Thoroughbreds or ones with known behavioral issues, most come in with some, ummm… remarkable … stories told by owners or trainers. These explanatory tales provide backstory on their situation, sometimes help flesh out what happened during a dangerous incident or the like, and set goals for training.

But one can’t stop there. 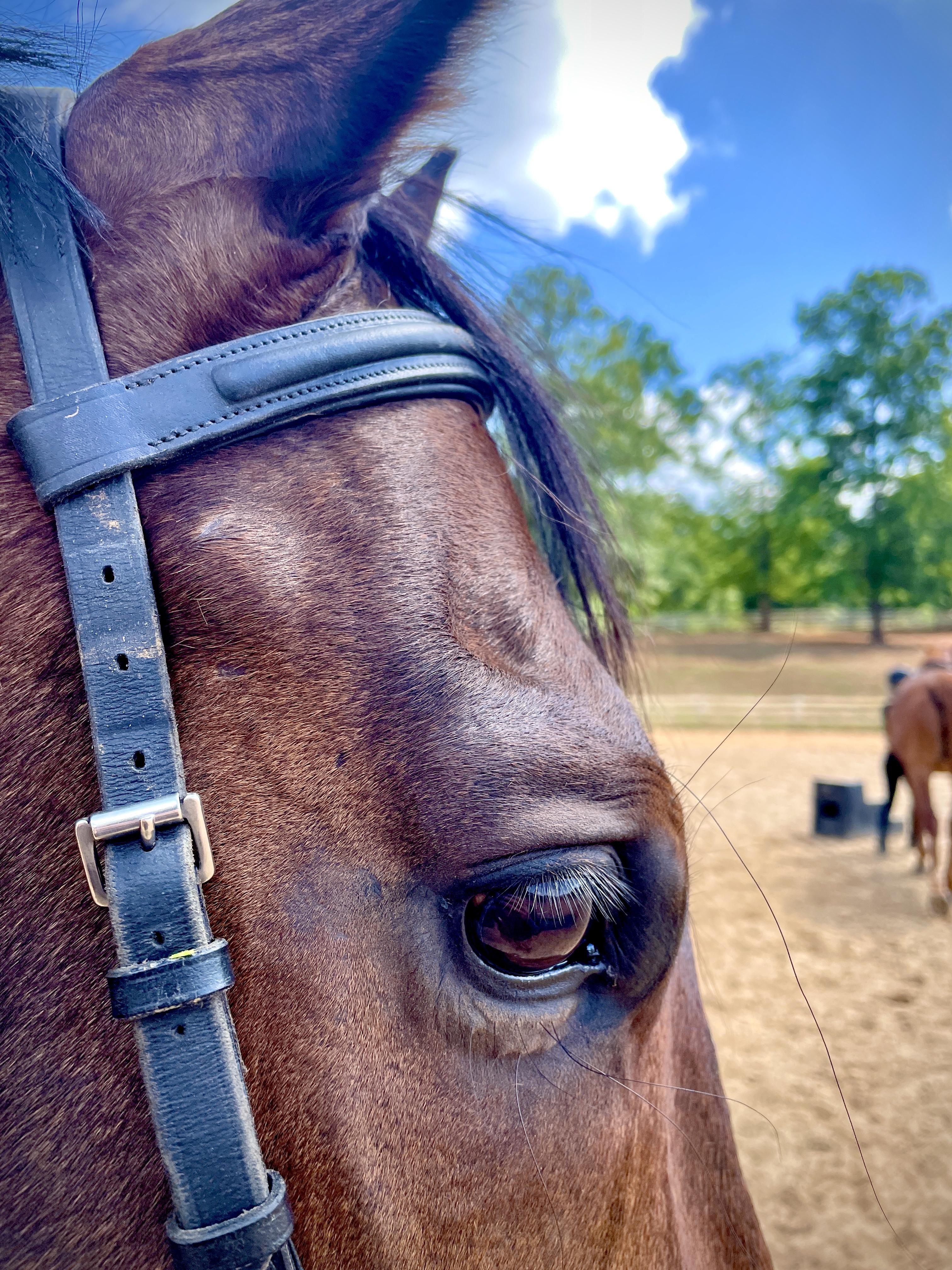 Johnny (Yukon Johnny) waits for the mounting block at home. Johnny has been described as “an onion” by his owner, as she has endeavors to figure out his story — in regards to his past and his present — and learn more about who her horse is. Photo by author.

These accounts are important, but they are not the horse’s whole story — one must also consider the horse themselves and their trackable history. That said, when given these accounts, I listen to what is there and I also look for holes. What info do we not have? What does that story explain and not explain? What info do I need to fully understand who this horse is and, in certain cases, what happened? And importantly, how has the information that this story carries, shaped how the horse has been handled since? If a horse was badly behaved, how has that event or the knowledge of it changed the day-to-day life of what the horse experiences? Have those slight modifications, adjustments, hesitations in handling contributed to further behavioral issues?

Cheese Whiz is a super example here. While he did not come here for particularly negative behavior, his human-told story is a long one with gaping holes. What we do know is that the Lassiters found him in a Texas kill pen with a label stating “young warmblood” or something of the sort. He was bailed and shipped to Georgia. He arrived still wearing his aluminum race plates. Some warmblood. His feet had holes everywhere and the poor kid was extremely skinny and barely able to stand. His new owner (thankfully a vet) rehabbed him and started him back to work before deciding that he should come hang out with me for official undersaddle work. 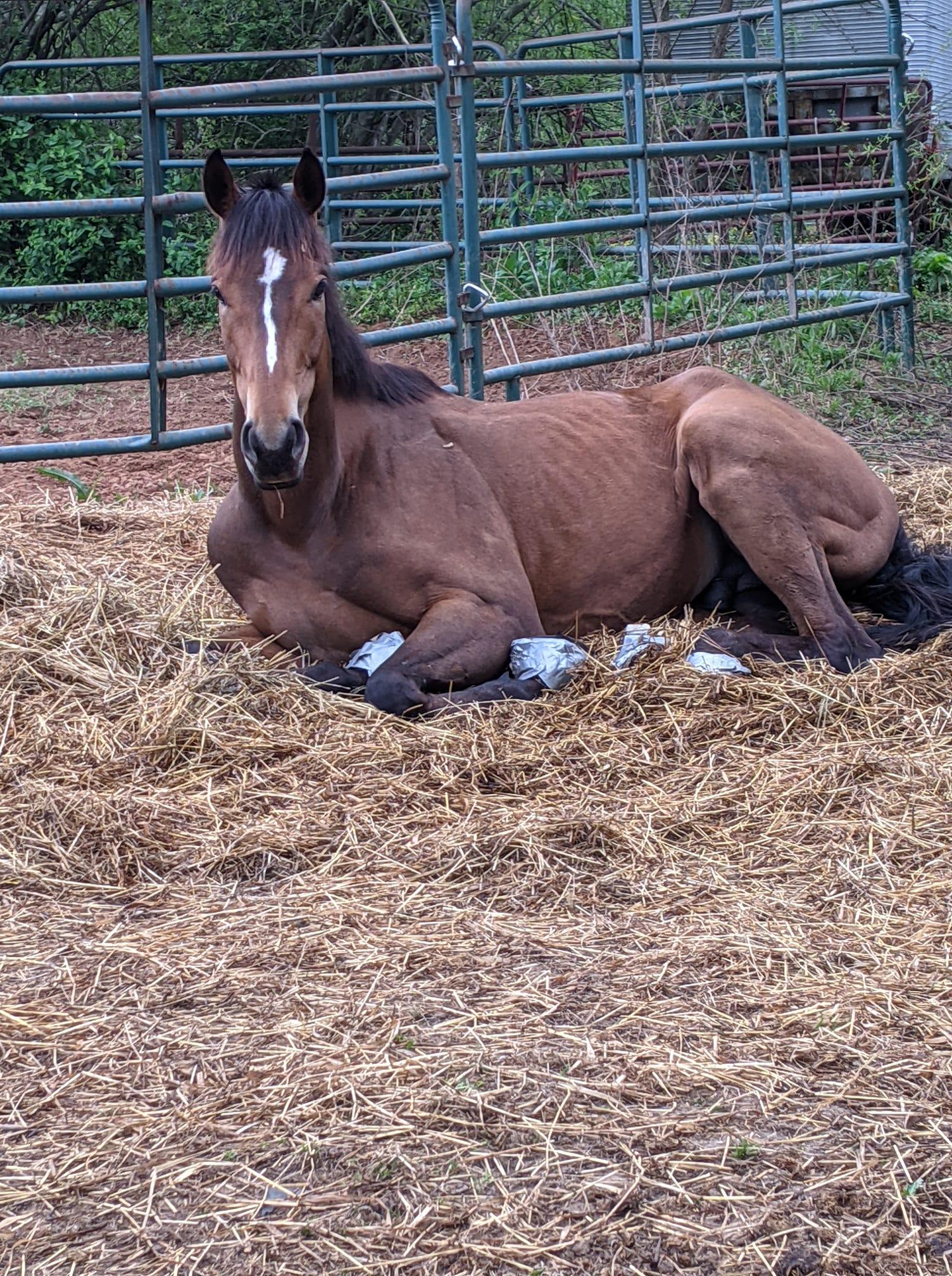 Cheese Whiz last year when he arrived at Lois Lassiter’s place after shipping in from Texas. Photo by Lois Lassiter.

When horses come in, stories like Cheese’s transition from kill pen to riding horse also get to be matched up with their competition and race records (often found on equibase.com), the comments on the race cards, videos of their races, and snippets of knowledge (pictures, posts, etc) to be dug up online and through other sources. The more local the horse, or the better I know their connections, usually the more info there generally is.

Cheese had no tattoo, and he remained an ‘unknown’ until we tracked down his microchip. Suddenly, with that beep and number, we learned another piece of his story: who he had been. The little horse named after the dead yellow color of his coat upon arrival was “RW’s Retirement,” a Thoroughbred, bred and raced in Louisiana. He apparently ran three times with a top speed figure of 19 – though two of the races logged a “zero” (for reference speed figures top out around 120… 19 is slow — really slow). Moreover, his race card sported notes that included statements about “veering” “faltering” “wide.” Such terms told me about his response under saddle, and made me wonder about how solid his track training really was. 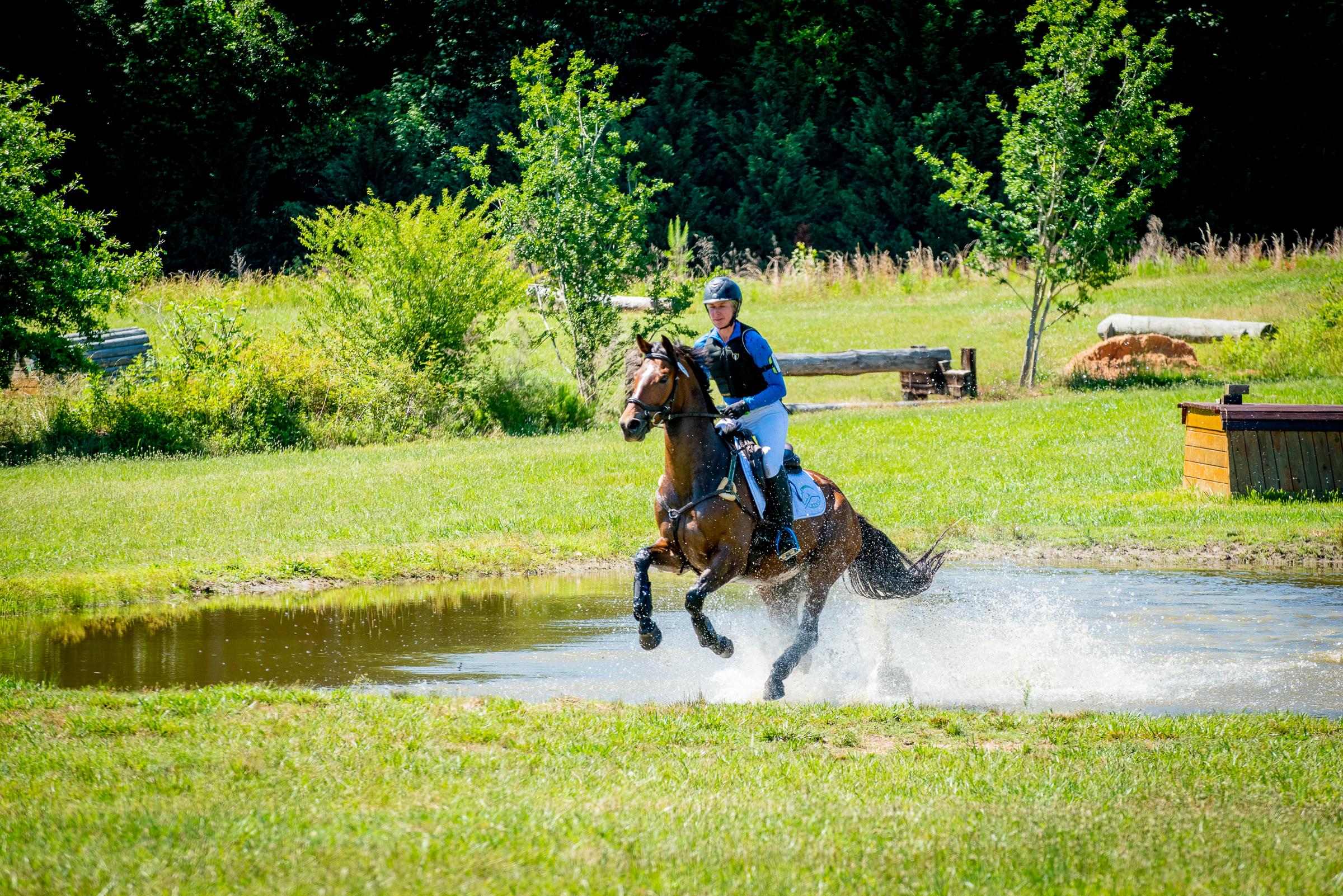 Cheese blasts out of the water at a Big Cheese Eventing Show at Ashland Farm last month. Photo by Cora Williamson.

I could write a small tome on how Cheese moves through the world. But the perhaps most important part is that he is always present with his ears up, and a little bit wide eyed – not startled, just more of a perpetually curious and excited horse. His movements in the field are bungee and his interactions from his position in the middle of the herd hierarchy are playful (always energetic) and irritating to the others, but never mean. Under saddle, when he first got here, he would toss his head incessantly, nearly planting his pole into your chest. And his steering was at points… erratic. In the field, his short-coupled ability to turn showed, but his trot was elastic, with next to no head tossing. 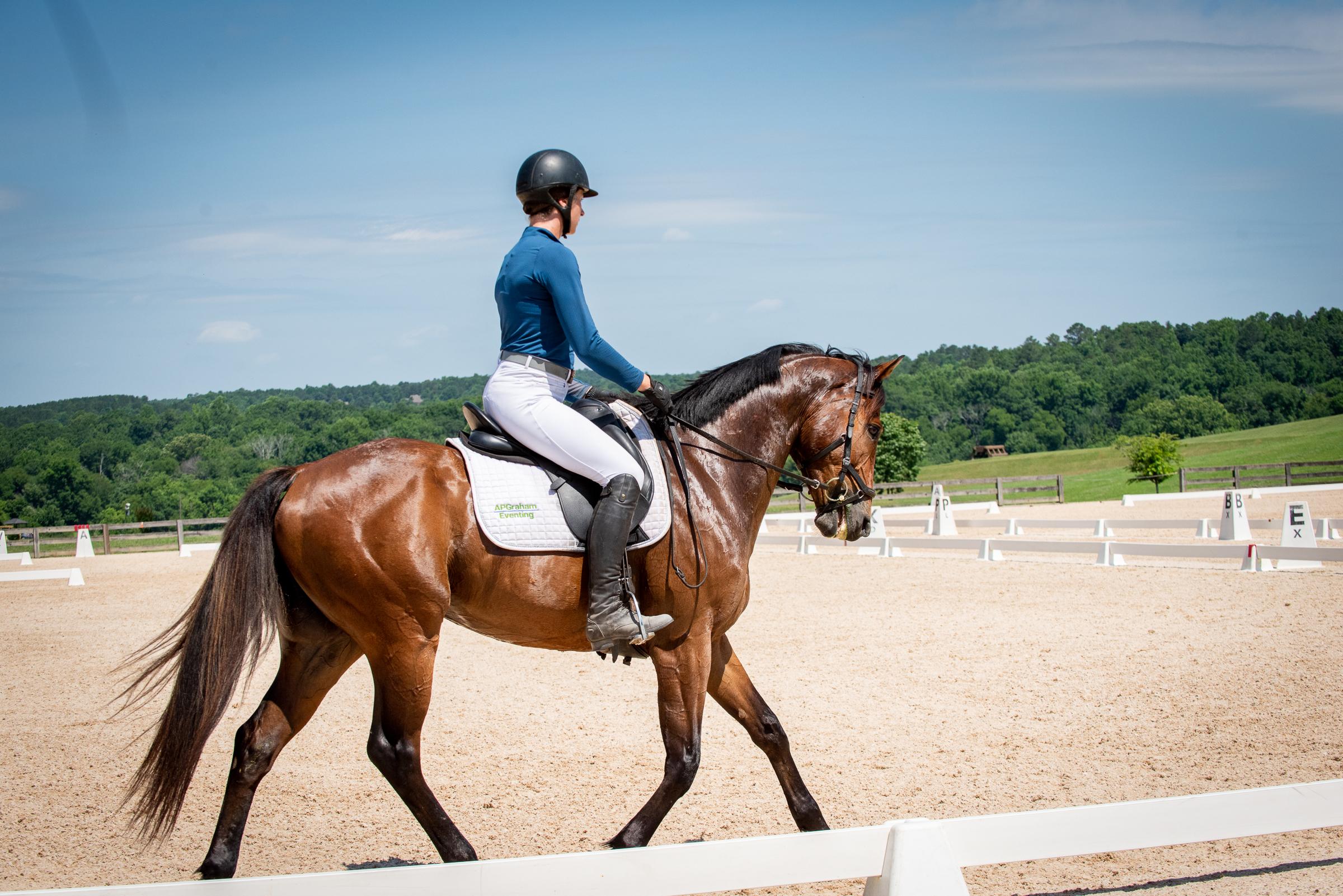 Cheese shows off his improving dressage and elastic movements at Chatt Hills this month. Photo by Cora Williamson.

So in training Cheese – in handling him on the ground and in making plans for his future — all of this information came together to meet the horse that I had each day – usually the same happy-go-lucky pinball. Cheese’s past and present showed that he needed to not just build on his short racing career (as many can) and what he had learned, but he needed to start again. So we trained slowly – demanding little, but celebrating when suddenly veering became turning and transitions took 10 strides, not 25; then one not 10. I pursued the elasticity and confidence I saw in the field, and with its growth under saddle, watched the disappearance of the head toss. 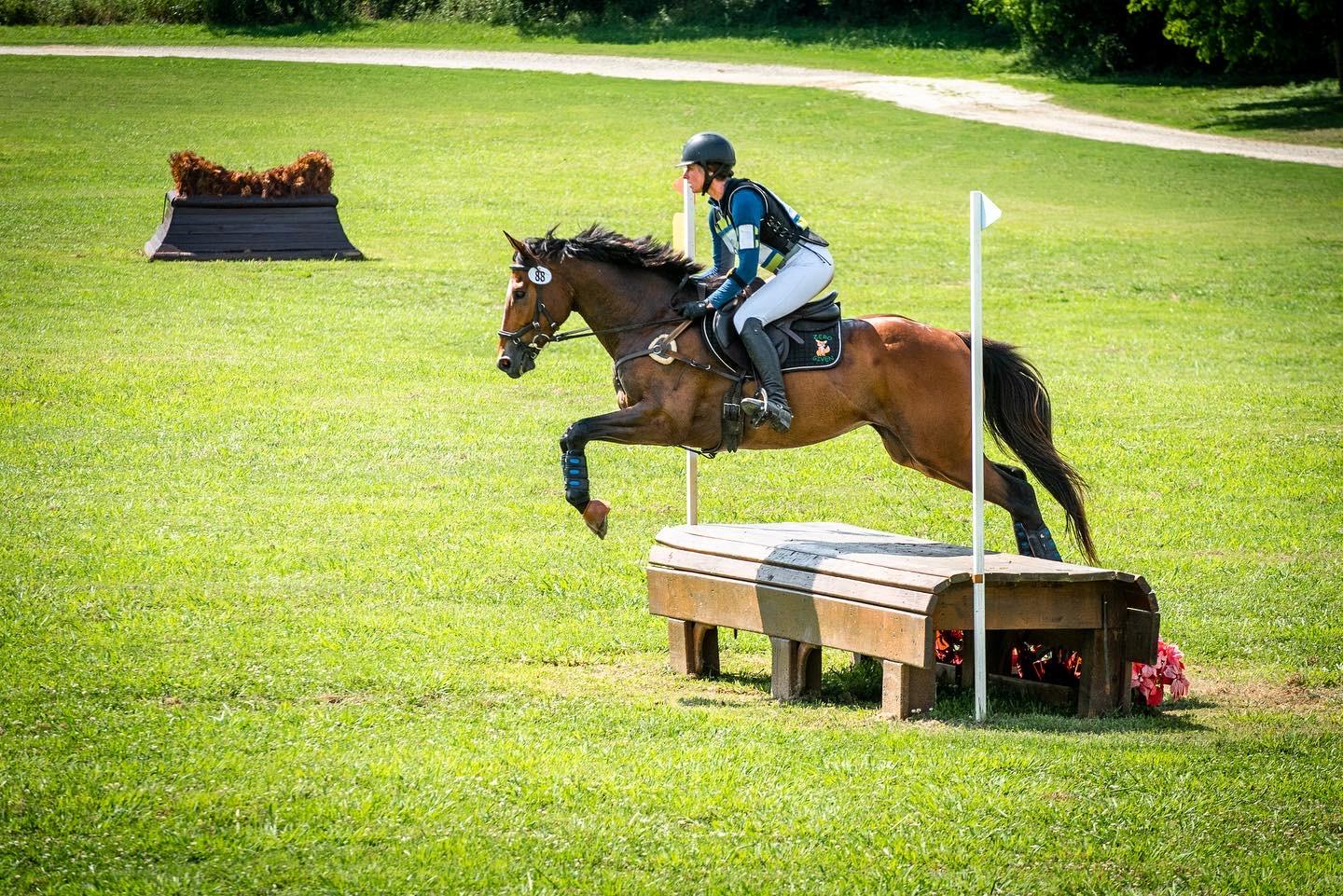 Cheese’s confidence has grown with steady training and with his, his form on cross country and over fences in general has become frankly, lovely. Photo by Cora Williamson.

And since February, Cheese has been competing — slowly, slowly moving into the land of eventing. The jumps and the bravery come easily to him and his ever-improving form reflects his work. Dressage is still a process, but he’s getting better each time. Importantly, Cheese’s timeline has been slow, and I’m enormously grateful to Lois Lassiter, his owner, who understood that being fair to this horse – in regards to his whole story — is to allow him the time he needs to build the right foundation. This sets him set him up so that all of the glitches and close calls of his past no longer need to define his future.