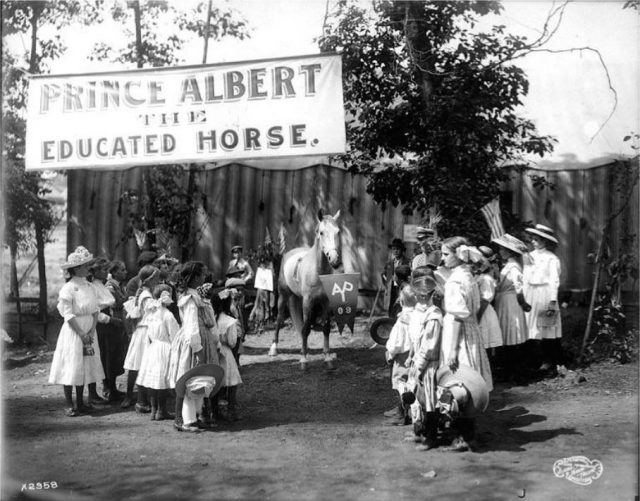 Studies have shown that horses can utilize both visual and tactile signals to communicate with their caretakers, learn symbols and distinguish between human facial expressions. So just how smart are horses? Let’s take a look at the history and exciting new research into horse intelligence.

In the early 20th Century, several horses galloped onto the scene, forcing people to rethink horse intelligence. The most well known, Beautiful Jim Key, toured from 1897-1906 with his owner and self-trained veterinarian, William Key.

According to the official website, Beautiful Jim Key could “read, write, spell, do math, tell time, sort mail, use a cash register and a telephone, cite Bible passages, and engage in political debate.”

Not to mention, “ … at the 1904 St. Louis World’s Fair, he performed in front of then-President Teddy Roosevelt’s daughter, Alice. When asked to spell her name, he cunningly attached the surname of her escort, Congressman Nicholas Longworth, setting up letters to read: “Alice Roosevelt Longworth.” When the couple was married two years later, Beautiful Jim Key was declared to be psychic as well as a genius.”

A quote attributed to Time Magazine declared, “This wonderful horse has upset all theories that animals have only instinct, and do not think and reason.” 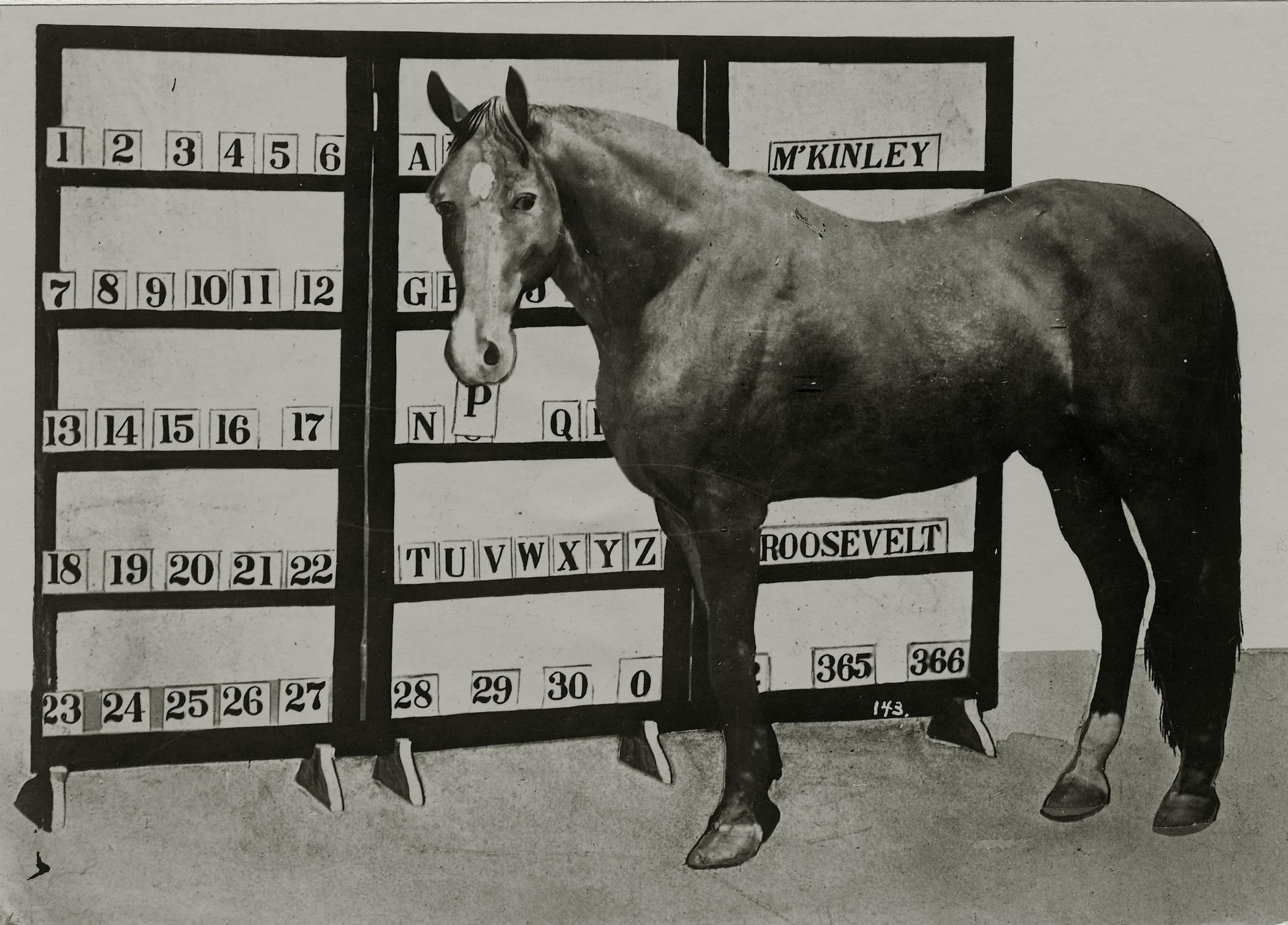 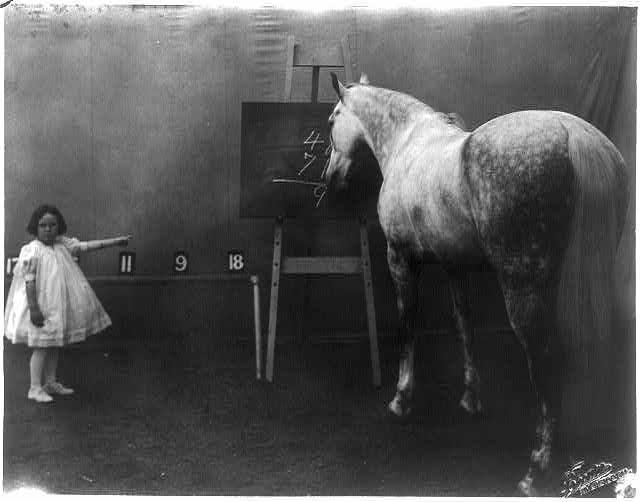 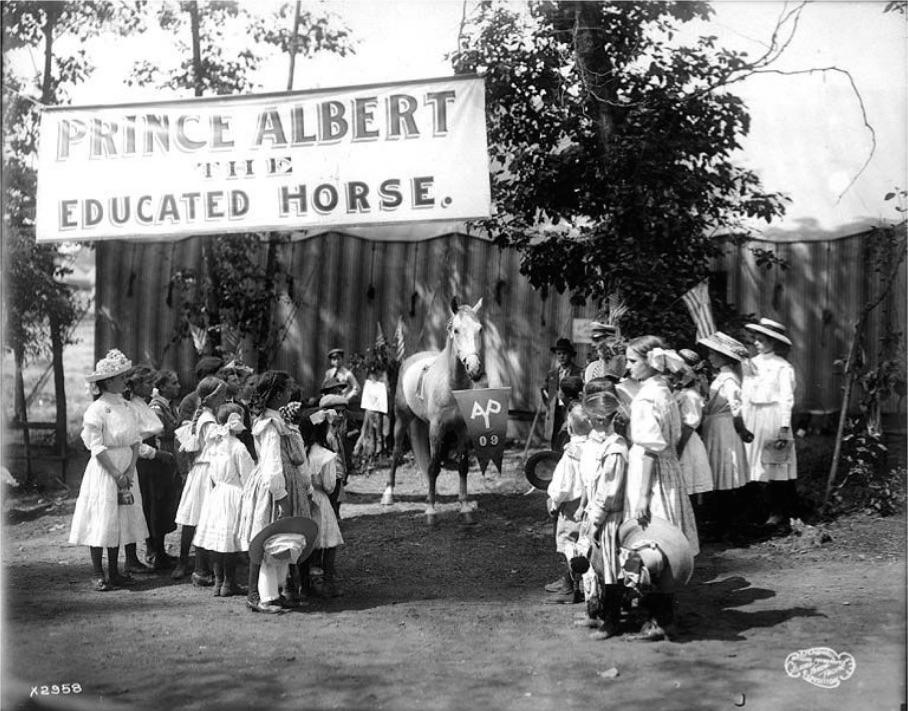 A more controversial case was Clever Hans of Germany. Clever Hans toured Europe through most of 1906 and was brought under investigation in 1907. Claimed to be able to “add, subtract, multiply, divide, work with fractions, tell time, keep track of the calendar, differentiate between musical tones, read, spell, and understand German,” a psychologist proved Hans was doing none of those things. In actuality, he was reacting to subtle involuntary cues from his trainer. 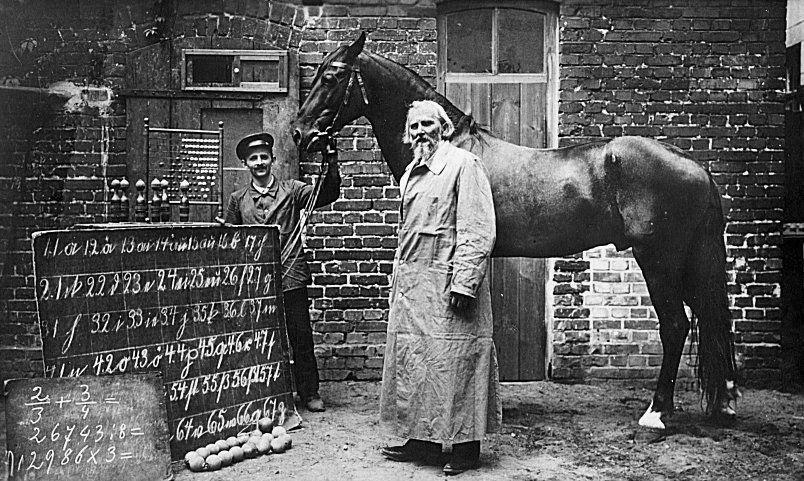 Which brings us to the subject of how we judge and measure intelligence. Many people unequivocally believe dogs are one of the most clever nonhuman species. I think any animal that routinely chases after the same spit-slathered ball thrown by the same person isn’t all that quick-witted. #imacatperson

My point is it’s very difficult to judge intelligence when the species doing the studies, i.e. us, comes into them with bias. The psychologist that debunked Clever Hans proved the horse couldn’t find the square root of Pi, but also that he was savvy enough to read the body language of an entirely unaware owner. Isn’t that just a different form of intelligence?

Two studies — a 2016 and 2017 study, both at the University of Sussex in England — proved empirically that horses could read facial expressions and body language. In the 2016 study, 28 horses were shown photographs of a man’s face expressing either a positive or negative emotion. The horses’ heart rate increased when they observed anger.

The 2017 study observed the 30 horses in the study were much more likely to approach a caretaker in a submissive posture with slouched shoulders, arms and legs close to the body and relaxed knees compared to one in a dominant stance with arms and legs spread and chest puffed, even if that caretaker had previously given the horse a treat.

A 2016 experiment at Japan’s Kobe University proved horses not only can interpret body language, but also act on it. In this study, eight horses watched as a carrot was hidden out of sight from the main caretaker. The horses were observed looking at, touching and lightly pushing the caretaker toward the hidden carrot to alert them of the hidden treat.

Similarly, a 2016 Norwegian study trained 22 horses to use symbols painted onto white boards to communicate, “put blanket on,” “take blanket off,” and “no change.” Researchers first taught the horses to touch the symbol board with their muzzles and then associate each symbol with the correct action.

On particularly warm, sunny days, all of the horses wearing blankets asked to have them removed. Below the 45-degree day mark, blanket wearers generally signaled “no change.” Even more remarkable, the control group not wearing blankets actually selected the “blanket on” option at that temperature.

Though once just an entertaining sideshow for the masses, science is proving what equestrians have always known … that horses are thinking feeling creatures with a vested interest in what’s going on around them.

Blanket, no blanket: “Horses can learn to use symbols to communicate their preferences,” July 2016, Applied Animal Behaviour Science.

Sending signals: “Domestic horses send signals to humans when they are faced with an unsolvable task,” November 2016, Animal Cognition.

For more info, check out the Equine Research Foundation.