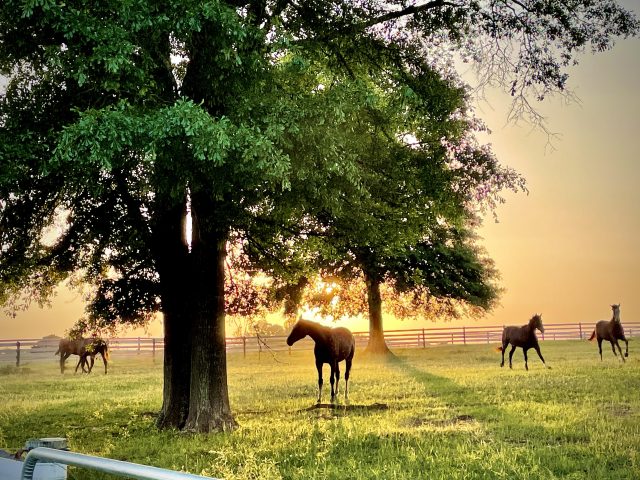 “Sometimes, the key to getting the horses going right for their people, is in fact, other horses (and a bunch of carefully managed turnout).”

Welcome to the next installment of Thoroughbred Logic. In this weekly series, Anthropologist and trainer Aubrey Graham, of Kivu Sport Horses, will offer insight and training experience when it comes to working with Thoroughbreds (although much will apply to all breeds). Come along for the ride as she offers her logic on turning out the off-track Thoroughbred.

Getting turnout right can be tricky for any horse. Getting it right for off-track Thoroughbreds can sometimes be…. well… what is more than tricky? Hard? Complicated? “Special?”

Here are some tips for how we do it with the newbies that come through.

Turnout, like everything, has a ton that goes into it. On one hand there are the physical factors to consider – the size of the paddock, its potential slope (we have big ole hills to consider here), footing, amount of grass and quality of fencing. Much of that deliberation is mulling over the potential outcomes of “when they run…” because, folks, they will. 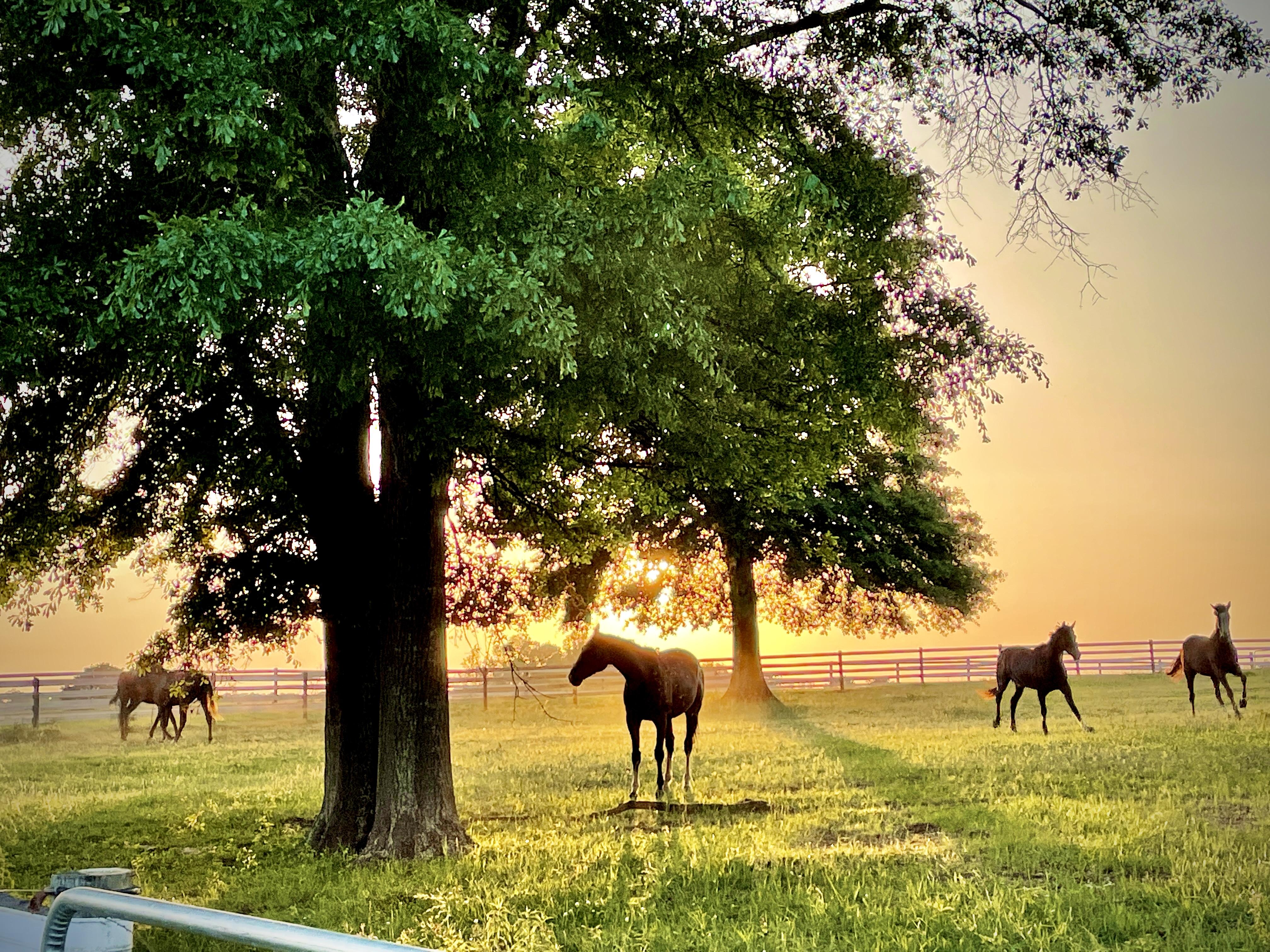 Big field turnout at Kivu. This shot came after they ran the fence to the top of the field, and some (ahem, Beans and Aspen) were still at it. Photo by author.

We usually start with turnout in the small paddocks or the round pen near the barn. This has a few benefits: I can keep an eye on the horses and bring them in when their “timer goes off.” Also, the turnouts are small enough that they can’t get up to any real speed, but can move about comfortably, roll, and begin the process of meeting friends – more on that in a minute, though.

Pro tip: if you think “they won’t touch that” or “there’s grass, why would they mess with x (that inanimate thing that will likely lead to injury),” I’d put money on them messing with it, and possibly breaking it or themselves. Smart, curious horses get into everything.

I once turned Rhodie (Western Ridge), Mountain (Mountain Holiday), and Louis (Unbridled Bayou) out in my arena during a particularly rainy spell a few months back, dumbly assuming that they would eat the lush grass around the edges. A bit later, I look out and Rhodie is standing IN my wooden Liverpool pawing at it. Mountain has a skinny jump plank in his mouth and is on the move, and Louis is trying to eat the faux turf that covers my wall jump. Was the grass around the edges gone? Nope — they hadn’t touched it. 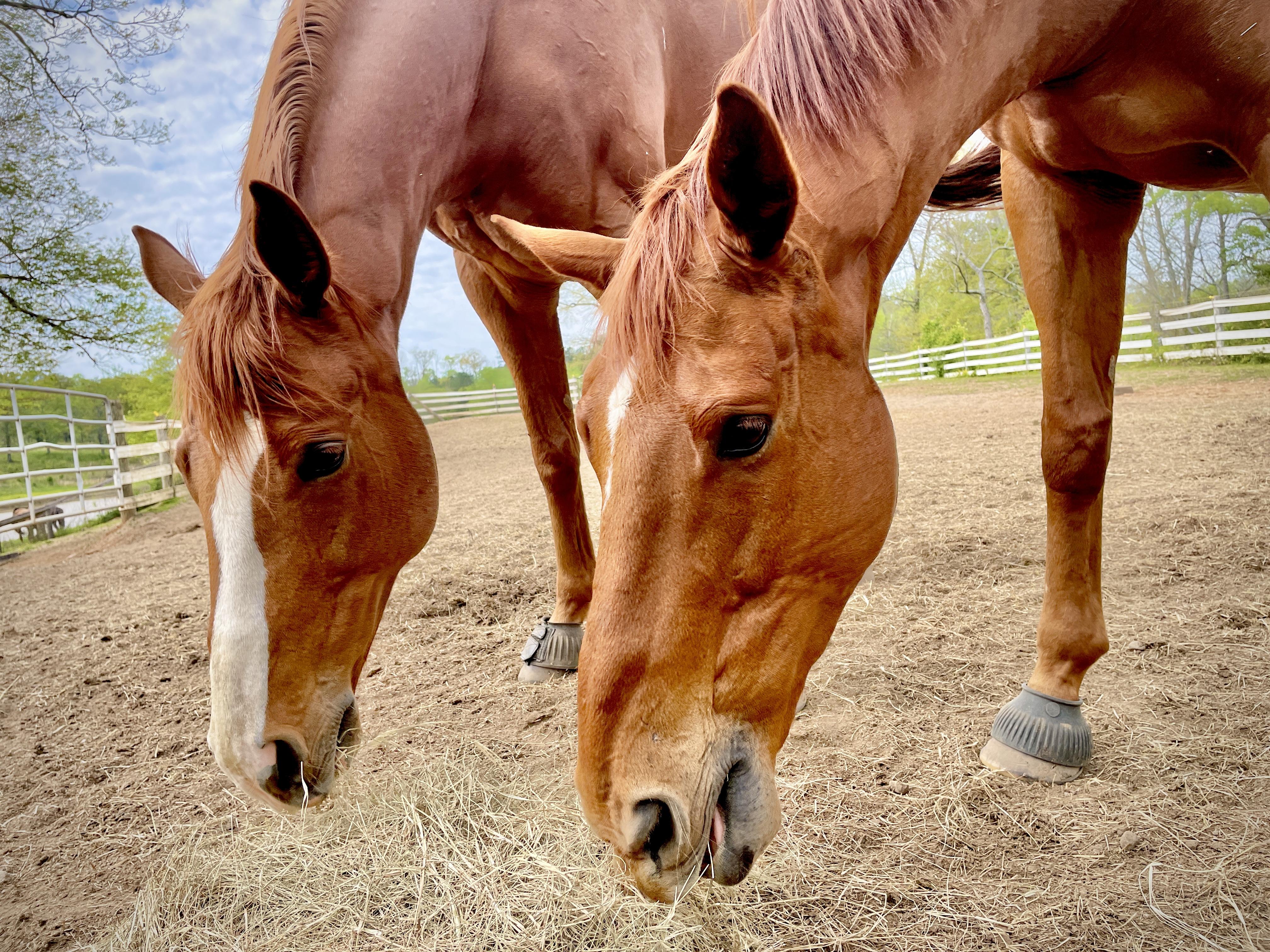 Forrest (Don’t Noc It) and Crafty (Crafty Charger) learning to be friends in small paddock turnout. Photo by author.

On the other hand, there are the physical and mental needs of the horse in question to consider. Are they sound enough for a big turnout? Will their brain allow them to stay sane and not melt down? Will they just run the fence line? How long can they turn out before they need a break?

Not all straight-off-tracks can handle just being kicked out in a (big) field.  Sure, some will pretend they never saw a track and mosey out into the pasture like this life of eating and oafery was what they were made for. Others will run like crazy, scare the hell out of you imagining their certain death, then real injuries or not, bang at the gate and demand to come back inside when they have had enough. Others will do all sorts of creative things in between. Because horses. (Insert affectionate, but exhausted eye roll here). 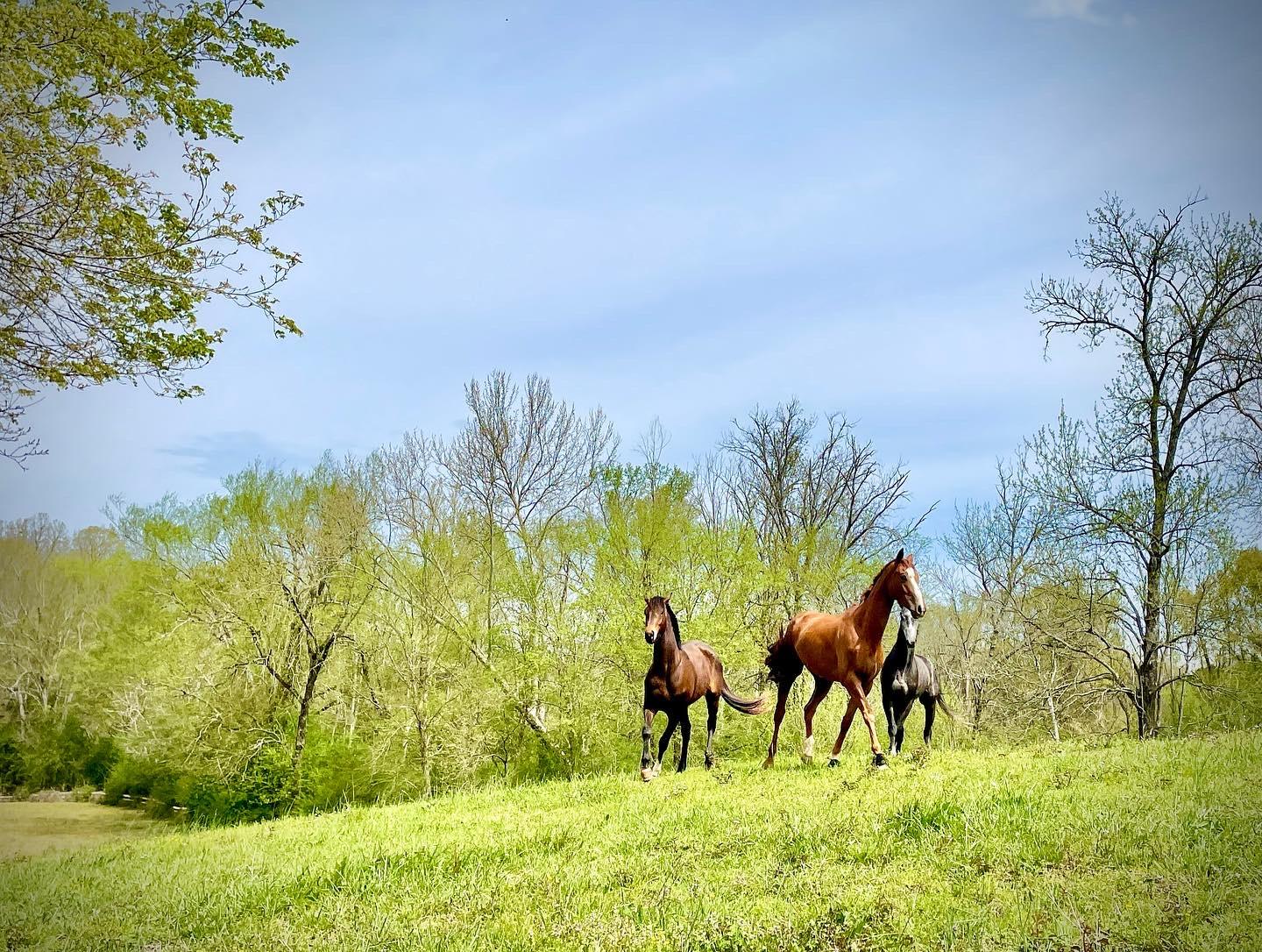 All recent off-trackers, Beans (Giant’s Gateway), Aspen (Aspenfiveoneseven) and Tuck (Louisiana Bling) explore the top of the near side of the lake pasture. Photo by author.

Starting with small paddocks before moving horses to bigger turnouts gets another plus here for being able to assess their personality when out and about. If they pass the sanity and maturity test, they can have more square footage.

Tuck (Louisiana Bling) makes a good example. He shipped directly from the track to here on a busy show weekend when I was only home at night. I opted for hand walking and a couple hours of small paddock time until the end of the weekend. Then I moved him to a slightly larger turnout with a friend. Together with said friend (Cheese Whiz) I was able to transition him out into the bigger lake field herd. He had a buddy, which helped with integration, and had proved the maturity and sanity to get the sizable acreage. 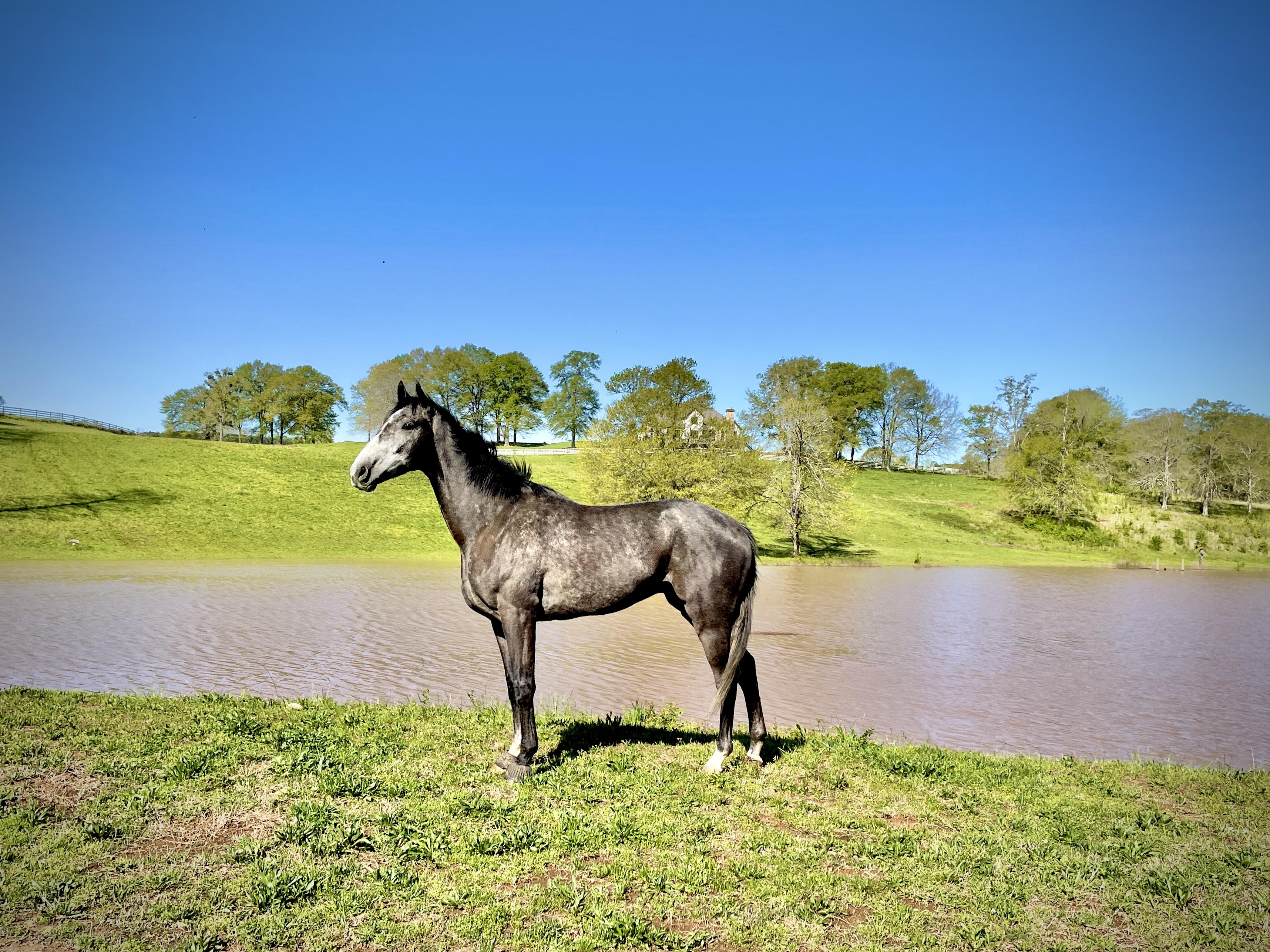 Only one week post-track, Tuck wasn’t quite confident enough to stray far from the gate to the field. Photo by author.

That said, it took Tuck about two weeks before he was comfortable venturing away from the grass near the gate. Now a couple months in, he is well on his way to learning how to be a regular horse (which, of course, also includes ample games of racing around, bitey face and I can rear higher than you). Tuck’s case and transition to herd-life is pretty standard and frankly, quite positive. Sure he comes in with nicks and bites, but he, like the rest of them, is a happy camper.

Part of that happiness is the ability to be social and “be a horse.” I try to get all of the horses out with herds (or at very, very least across a social fence line from friends). For small turnout, my ideal group size is three horses. Why? Because if you take one out of the herd, the other two realize they still have friends and wander along. If it is a duo, there’s increased chances of buddy sour-ing. In larger pastures, I’ll let the big herds grow to about six or seven, which fits the land and allows a mostly steady hierarchy (which is still simple enough for me to track and monitor). 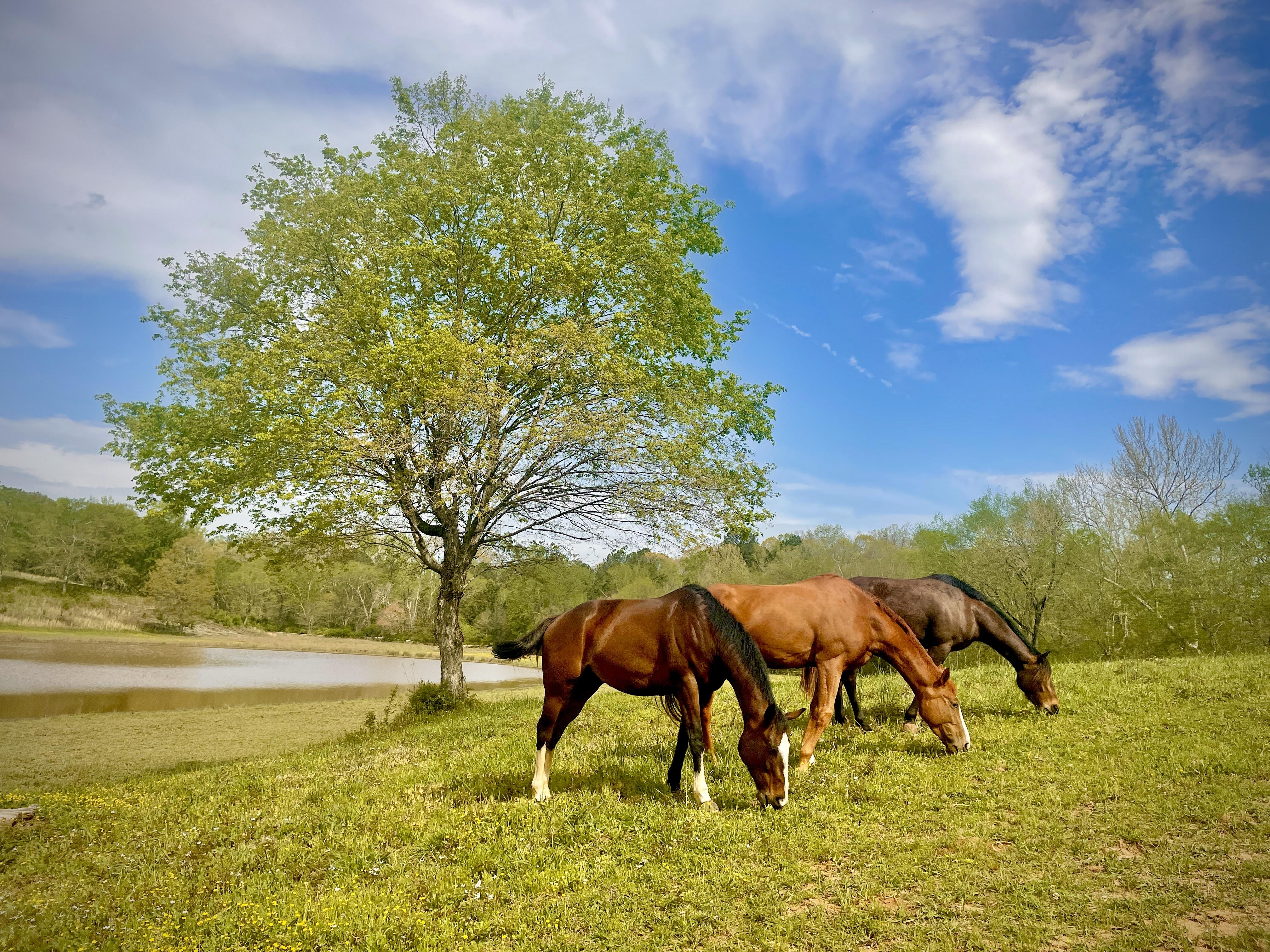 Ranger, Beans and Aspen graze in a convenient trio. Photo by author.

More important than the numbers, though, is the composition of the group. And that we manage carefully here. I’ll spend long periods of time just watching the herd – seeing how they line up at the gate, who scuffles with who, who is trying to change rank, and who is in charge. Knowing and occasionally curating the hierarchy helps to keep these horses out with friends but with minimal injuries (scuffs, and play bites aside). It also helps keep me and those who handle the horses here safe as they bring them to and from the fields. 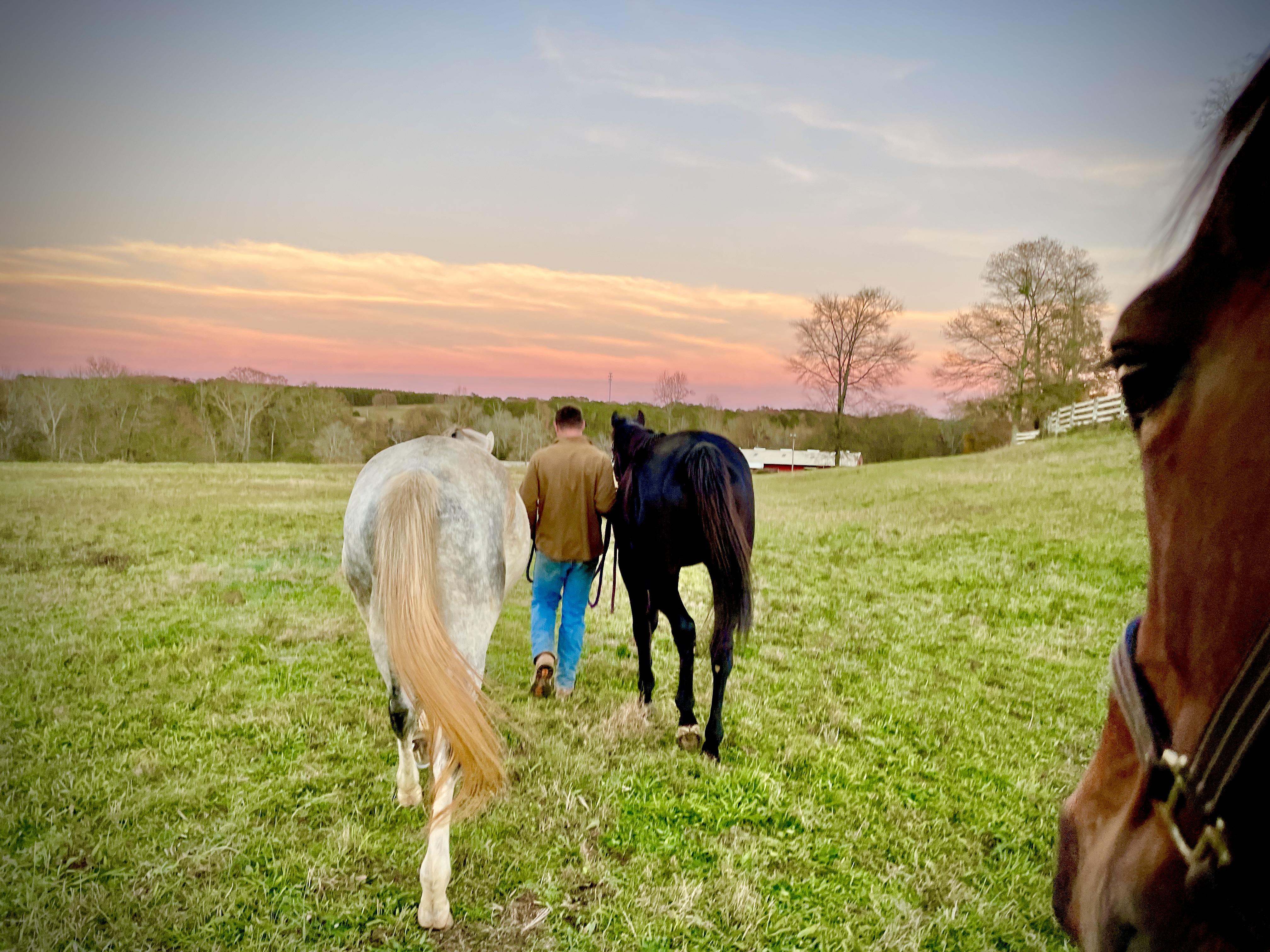 Shane leads Fuji and Cash in this winter, while I have hold of Rhodie and Cheese. Knowing who pairs with who makes for safer handling across the board. Photo by author.

A good lead/alpha horse is key to this whole thing. Hell, sound or not, they are worth their weight in gold. Fletcher (JC Reflection) was probably the best we have had. He oozed authority, but he did not have to act on it. That horse would stand still and let the youngsters prance and rear and strike around him, with his proverbial eyebrows raised. A singular kick or strike, and the hierarchy was settled with the new guy set to ease into a herd with Fletcher’s approval in the coming days. 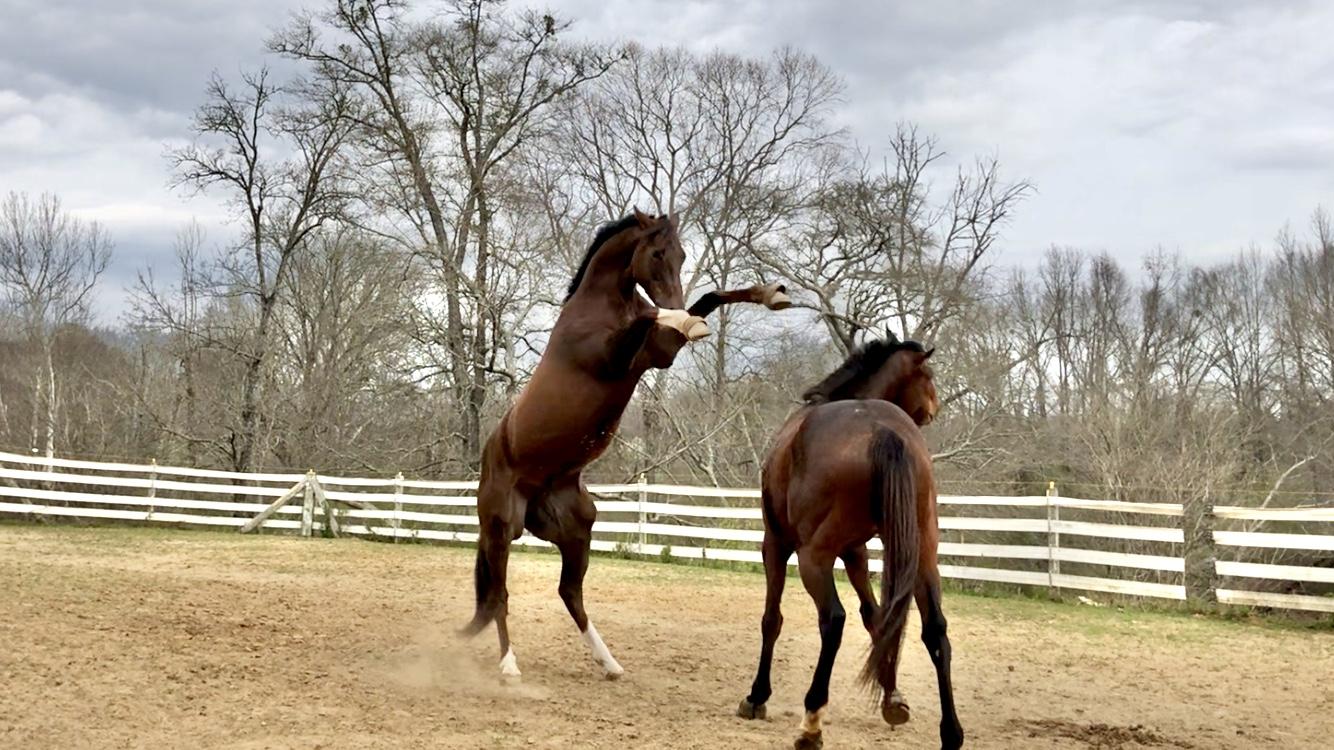 Fletcher (Reflection, on the right) applies his usual tactics of non-reactive leadership and avoids a posturing rear during Brisky’s 2021 introduction to the herd. Photo by author.

Usually, this herd introduction stuff is pretty simple. Sometimes, however, it does get dicey. This past week, a well-trained, well-seasoned Thoroughbred shipped in from a nearby farm. He is big, capable, and had largely been in singular turnout because of his pushiness/dominance. His attitude with humans was the same — pushy, arrogant, and yet somewhat insecure. He read as a standard bully, but only because he didn’t know better – there didn’t seem to be a mean bone in his body.

While I worked on getting him to realize that while he might be bigger than people, we still get significant respect, I decided to chip away at his aggressive insecurity by providing a herd leader. The challenging part was a) Fletcher has retired and b) if I failed in herd composition and this new guy became top dog, I would not have an easier time with fixing that attitude and arrogance. 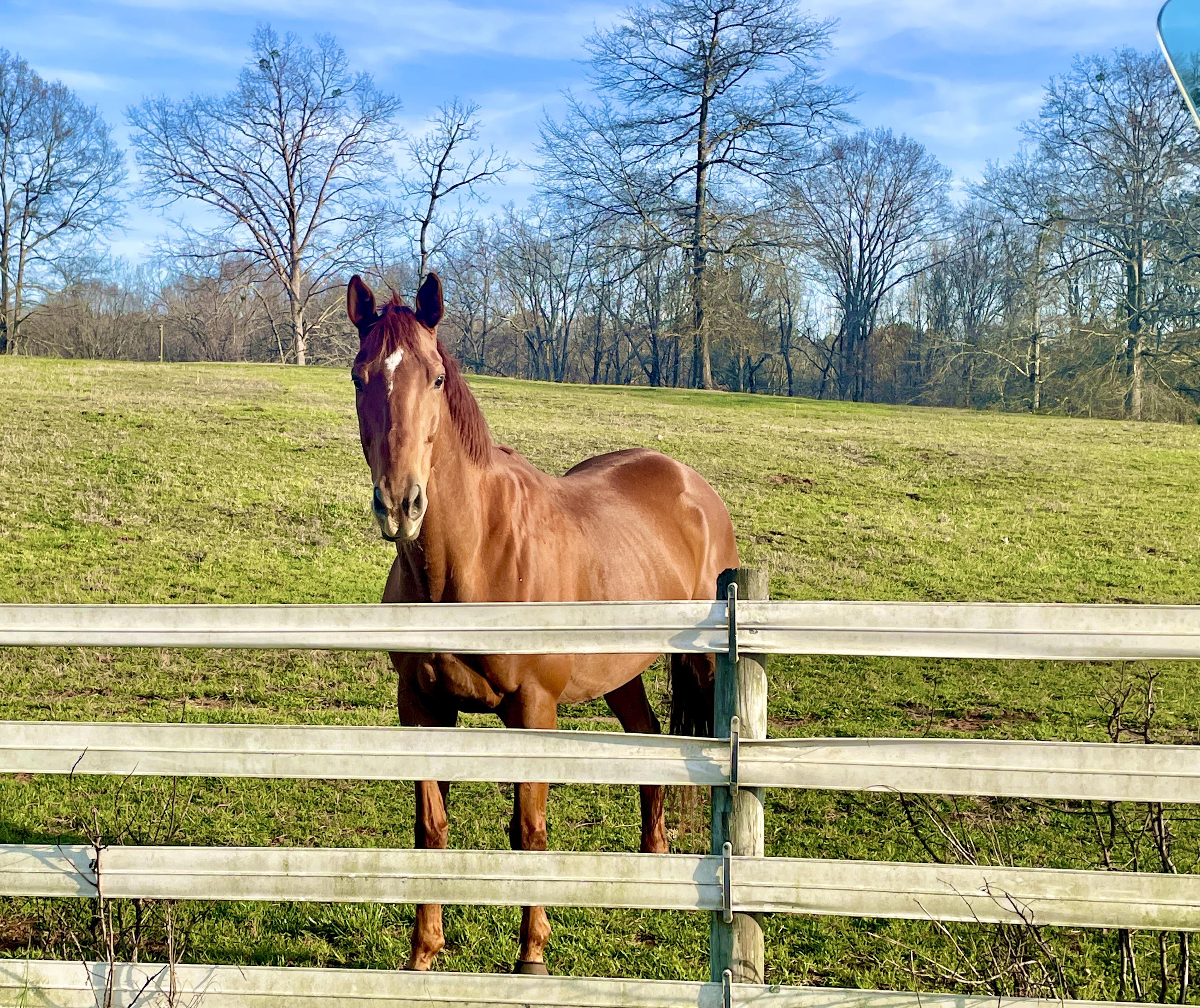 Forrest looks innocent here, but packs quite the set of alpha characters into his goofy, eight-year-old self. Photo by author.

So, I turned him out with Forrest (JC Don’t Noc It). Forrest used to be the biggest a$$hole there is in the field and similarly, spent a lot of time in solo turnout. But as he has grown up and matured, he has stepped into the calmer, steadier leader shoes. He is also tough as nails and not afraid to run a horse off if it gets too pushy.

Simply put, I needed Forrest to not lose against the big new guy. Playful, but thorough jockeying for top Thoroughbred ensued through the evening, overnight and well into the morning. By afternoon they both had settled into their hay and it had been settled — Forrest won (thank goodness), there were no injuries (also thank goodness), and the new kid earned a leader and a friend.

And guess what? That new kid has been easier to handle and sweeter on the ground. He has also been introduced to the small herd that Forrest controls and has settled into the bottom slot in the hierarchy. Now with that (at least temporarily) settled, I’m excited to watch his training progress and his attitude continue to improve.

Sometimes, the key to getting the horses going right for their people, is in fact, other horses (and a bunch of carefully managed turnout).