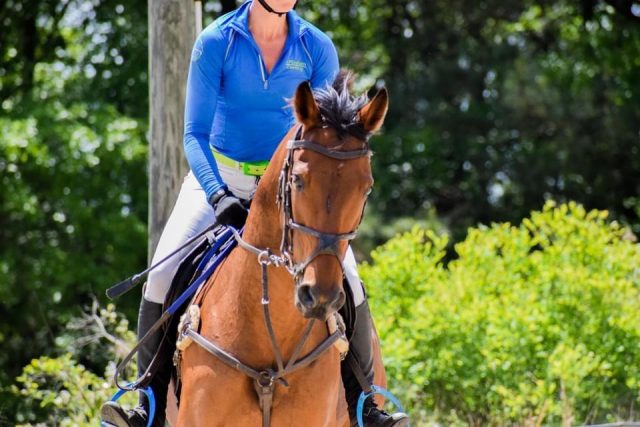 “Intentional riding cannot be a rigid thing — plans and responses must be flexible. Critical thinking and smart training kicks in here. It is enormously important to, first, be able to recognize when what you are doing is not working, and second, pivot, adjust, or change.”

Welcome to the next installment of Thoroughbred Logic. In this weekly series, Anthropologist and trainer Aubrey Graham, of Kivu Sport Horses, will offer insight and training experience when it comes to working with Thoroughbreds (although much will apply to all breeds). Come along for the ride as she offers her logic on how to ride intentionally and how sometimes that means changing tack (the metaphorical kind that stems from nautical terminology, not your saddle, horse folks).

A few weeks back, I hopped on Rhodie (JC Western Ridge) with the plan of doing a low jump school. He had a Novice Three-Phase debut coming up, and I was working on keeping him quiet during his transitions as well as improving how he comes back after fences. At about 10 minutes in, we were headed back through the barn away from the arena. I yelled, “change of plans” to my working student as I offered a gallop up the driveway. Ears full forward, Rhodie didn’t hesitate. 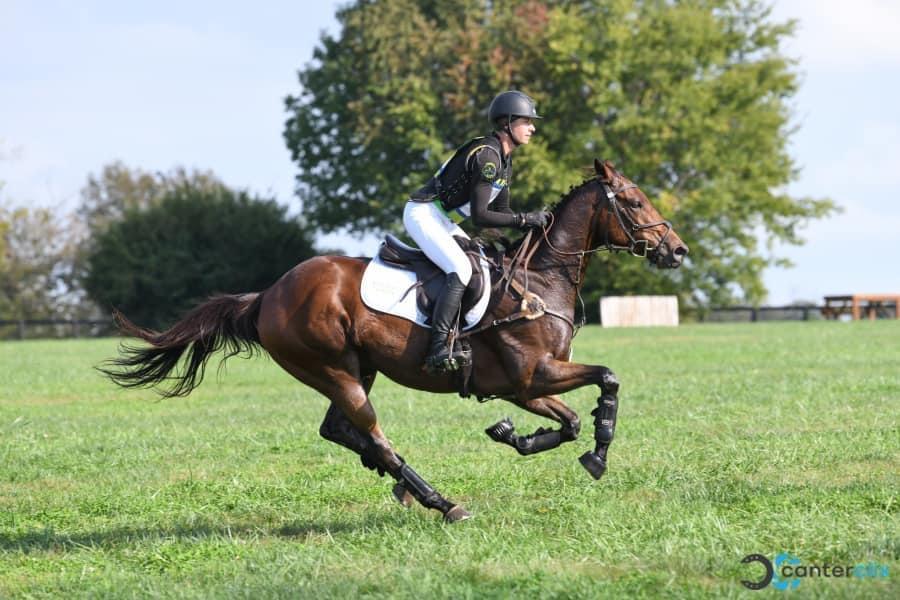 In the first part of this mini-series about intentional riding, I espoused all sorts of ideas about grammar and horses – finding things to work on and goals to work towards. Intentional riding that way is usually a productive, smart-horse-forward way to approach schooling. Today, however, I’m going to suggest that it is just as useful to be ready and able to throw all of that out the window. Change. Then change again.

Intentional riding cannot be a rigid thing — plans and responses must be flexible. Critical thinking and smart training kicks in here. It is enormously important to, first, be able to recognize when what you are doing is not working, and second, pivot, adjust, or change. (Yeah yeah, this probably applies to life in general too). To rely on clichés, riding intentionally is also about that whole “ride the horse you have today” thing. 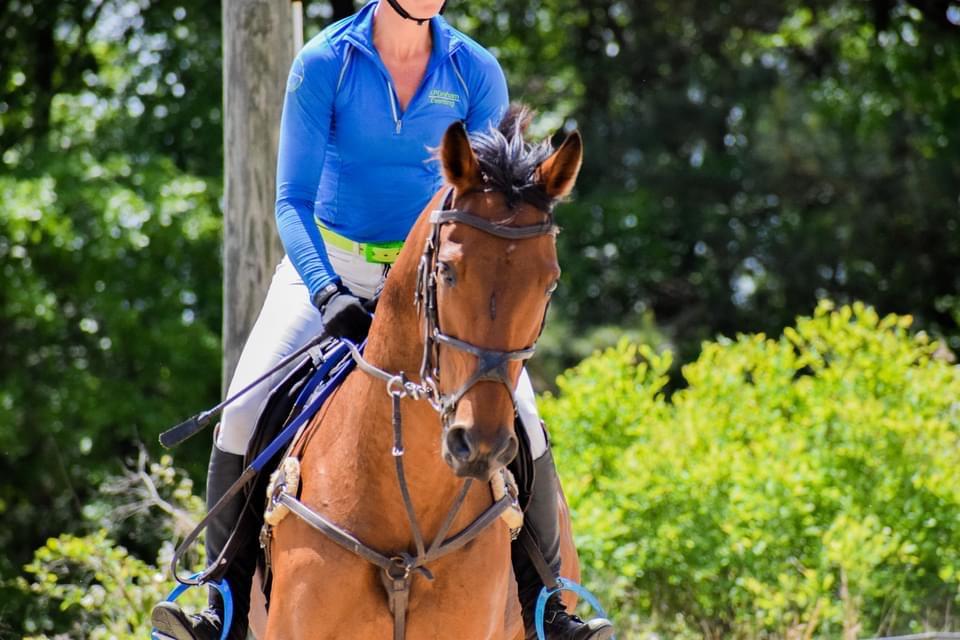 At least this dragon (Western Ridge “Rhodie”)  is handsome. Photo by Alanah Giltmier.

Pretty much any ride on Rhodie would make a lovely example here. This little plain bay Thoroughbred is known affectionately as “Dragon” for a reason. He is extremely talented and whip smart, with a temper to match. Some days are phenomenal and full of progress, some, not so much. Rhodie does not just “roll with it” if he doesn’t understand, doesn’t want to, or doesn’t feel good. Nope, he’ll use all four hooves for a collective middle finger.

Plans are good, but that will only get me so far with him. Dragon-training is a delicate balance of skill, tact, and compromise. Give in too much and he’ll insist that all you do is blast around the arena. Give too little and he’ll intentionally grind progress to a halt – lock up, run sideways, try to climb out, or you know, plow through jump standards. Sometimes on bad days, all he needs is a good gallop up the road and then he’s happy to go back to the ring work that was originally intended. Sometimes, working with the horse you have that day means careful but persistent negotiation through the “NO.” 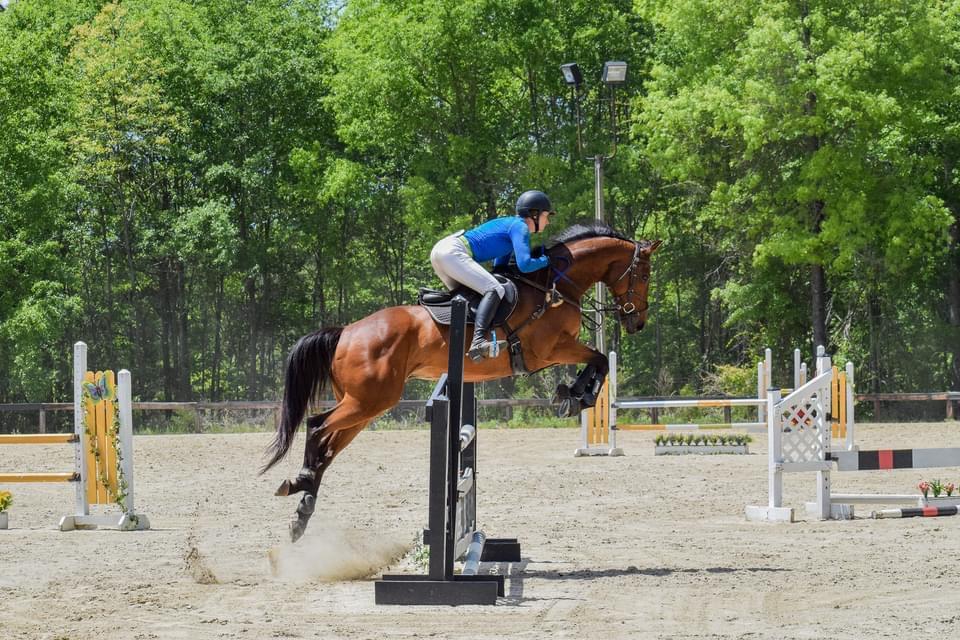 Rhodie gave up his “No” and rocked around Training level at a Big Cheese Eventing show this past weekend. Photo by Alanah Giltmier.

At Poplar Place two weeks back, Rhodie emphasized the “ride the horse you have that day” mantra and re-oriented my training plans for the foreseeable future. Sometimes, it be that way.

That Saturday’s Rhodie fought me for Every. Single. Step. He locked his jaw, tossed his head, and tried to scoot out from any use of his hind end. I accommodated but kept at it, shifted my warmup exercises and tried to find his comfortable level of contact. His “no” just became part of the ride. Once I recognized that it wasn’t going to magically disappear, I had to decide (like real, real quick) how much to or not to accept it. Fast, critical thinking was not allowed to be in short supply.

His dressage and stadium rides ended up a delicate balance of “because I said so,” giving in/up, and ultimately, riding to stay safe. I traded fancy extensions in our First Level test to hold him together for the turn, gave up the flow of a smooth round to rock him back and check his downhill momentum in stadium. We finished his dressage on one of our worst scores. Stadium was similar. That said, despite fighting me for every “sit through the turn” or “rock back,” the last two fences were still some of his best.

If I’m being honest, I went into Cross Country somewhat deflated. Riding the horse I had that day and working with his fussiness and temper at a show was frustrating. I had goals that he gave no f*cks about. I cared about our rail penalties and dressage score; he didn’t even know such things existed. I felt like doing all the things; he didn’t.

But to make my point about being flexible on a minute-by-minute basis, on Cross Country, that horse was a beast. There was no “NO.” He gamely floated over fences, never blinked at the water, the ditch, or the down bank, and took everything in a ground-covering stride without wavering in the slick conditions. That was his happy place and I’m glad I didn’t give in to his temper and scratch him. He earned the blue literally on that XC performance alone. 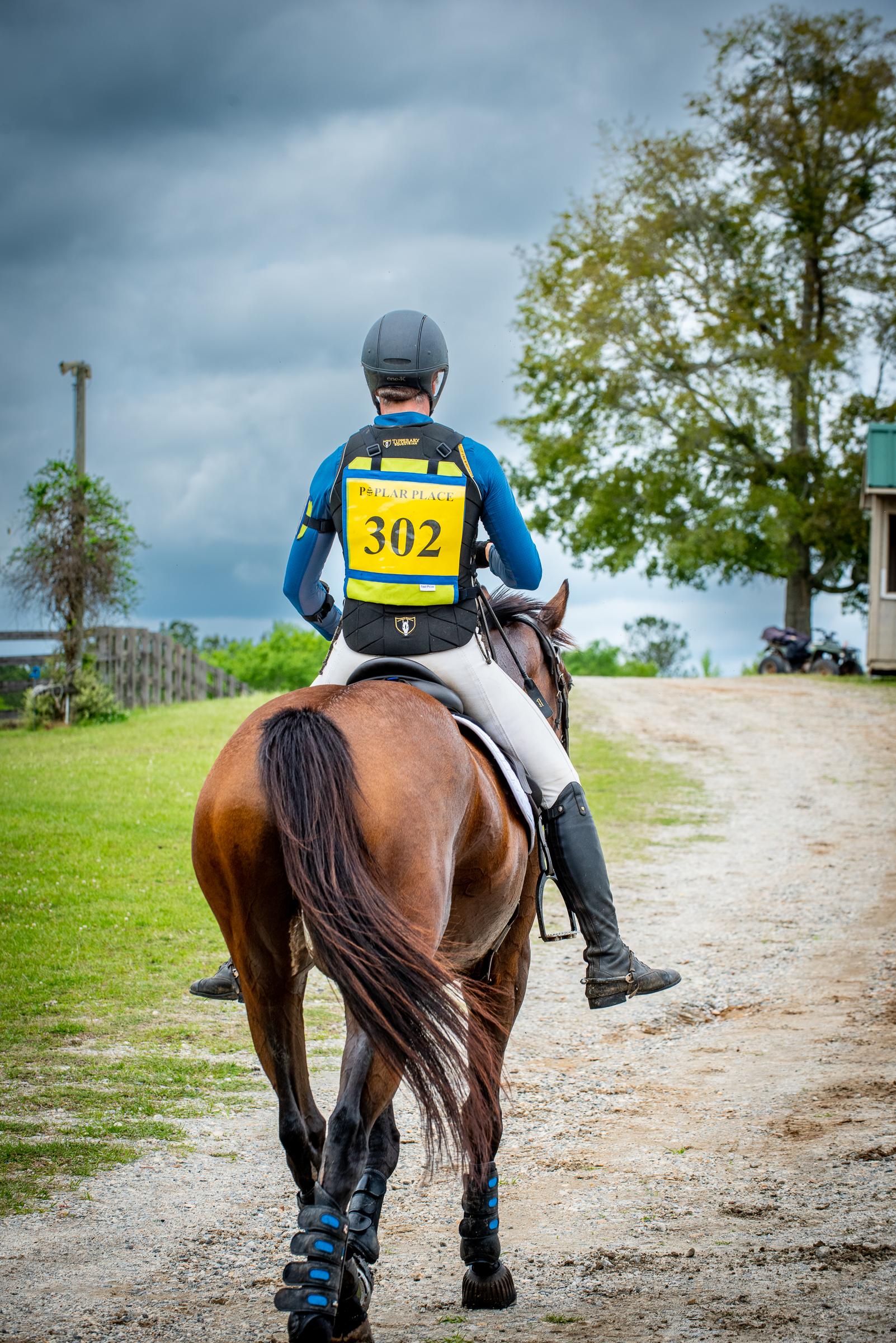 During the post XC walk back to the barn, Rhodie had had fun and was finally done with “No.” Photo by Cora Williamson.

Figuring out how much to compromise is a balancing act. Critical thinking in the face of a “huh?” or “no” asks us as riders to take stock of not only the horse and how they responded, but also of our own bodies and how we rode/what we asked. Add to that that we must assess  the “bad” behavior, stress, or confusion and decide how much to push through, change tack, or back off and live to fight another day.

There’s no simple answer here. Sometimes, we must find another way to explain an exercise – dumb it down and make it clearer. Sometimes, we must go hunt down a source of pain. Sometimes, we need to modify behavioral responses and lead better. Sometimes we do all of that, find and treat the causes of pain and sort out confusion and still need to come back and address a “no” again. Horses are hard, folks.

To be fair though, not all horses are as complicated or as opinionated as Rhodie. With most of the green Thoroughbreds at my barn, being flexible sometimes means simply addressing their “up” days with different exercises and adding in more “OK go forward” and figure eights. Sometimes it means tossing the plans for the first day of jumping out the window, and instead addressing a newfound tendency to drop a shoulder, or working on balancing the canter. For Cheese (RW’s Retirement) yesterday, intentional riding meant getting off after 15-minutes of trot work and not pushing it simply because he was so good. 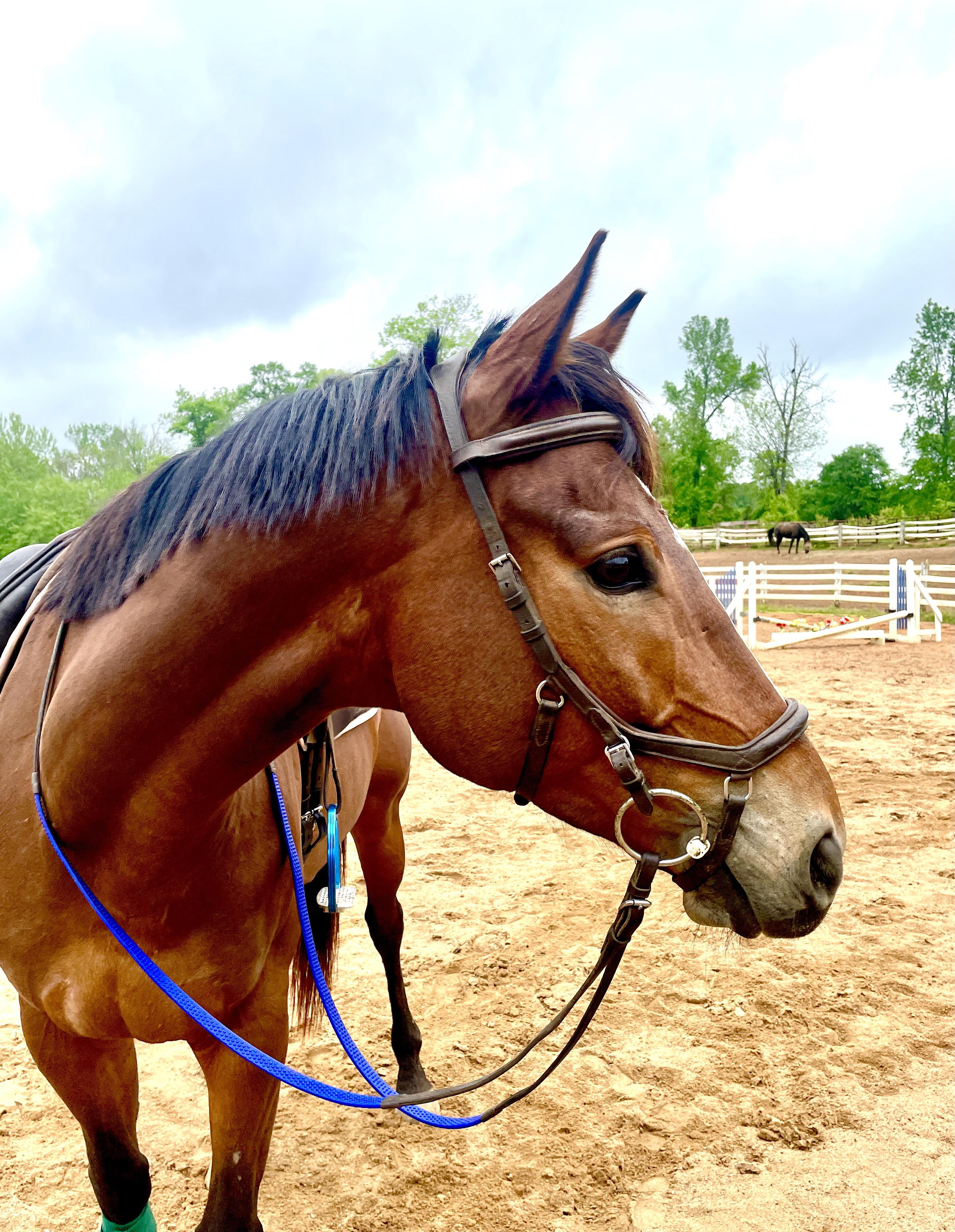 Cheese being his usually stupid cute self before the ride yesterday. Photo by author.

In sum, being willing and able to modify your plans, progress, and goals to meet your horse where they are on a day-to-day and sometimes even a minute-by-minute level, is essential. That flexibility and quick, critical thinking is as much a part of riding intentionally as is the clear process of working on issues and towards goals. So with Rhodie, I’m training to make him stronger and fitter so that he becomes more capable of pushing through that “no.” For the rest of them, I’m enjoying the ride and making the walk down to the arena with plans that I’m just as happy to enact as to scrap.

Kick on folks, and enjoy the horse you have today.