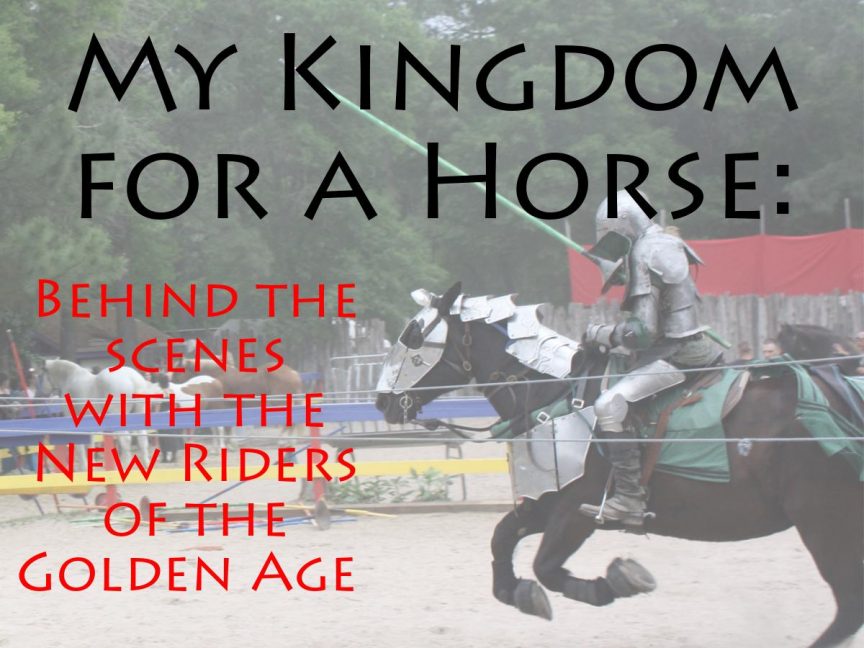 Go behind the scenes at a full-contact jousting tournament. 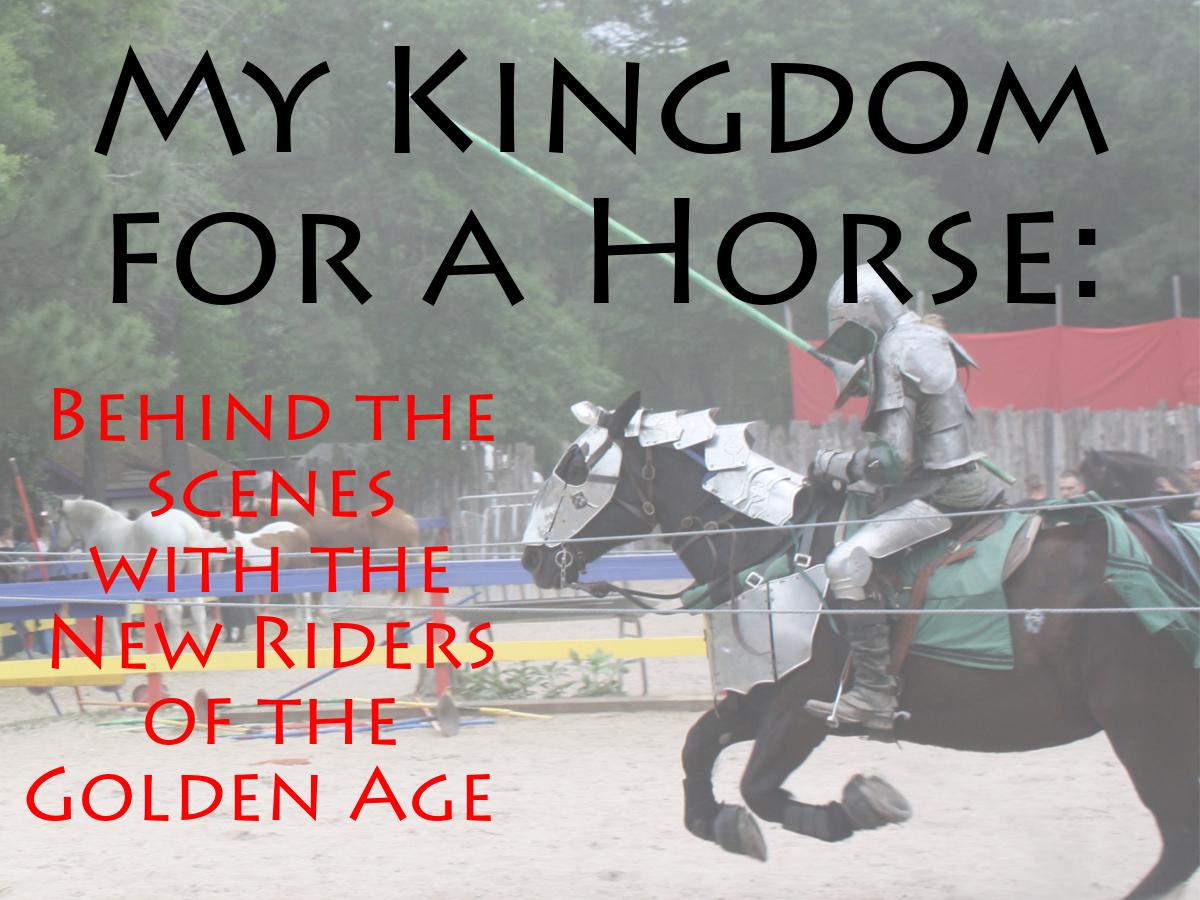 The eccentrically dressed crowd — most in medieval or Viking garb, though there was one anachronistic Iron Man — buzzed with excitement despite the smoldering Texas humidity as we made our way through the castle façade and into the bustling grounds of the 2022 Sherwood Forest Faire.

Weaving my way through a living history village and vendors and artisans of all types, I found my way to the booth of the New Riders of the Golden Age from War Horse Farm in Sarasota, Florida, to meet my guides for the day, Shelby and Alexis.

Shelby found a summer job at her local renaissance festival when she was only 16. Having had prior experience with horses, she was immediately placed in the stables and at the age of 18, she decided to hit the road. Ten years later, she’s still touring up to 11 months a year. Her duties include caring for the horses, organizing farriers and veterinarians, and working sales at the Wassail Horns booth. Alexis has worked off and on with the company for a few years alongside her partner, Sir Andrew.

Tucked behind the jousting arena, the stables were a simple sand lot with wood stalls covered by a red Roman-style velarium. A string of black Percherons stood waiting patiently, each with a hay bag and water bucket close by. Despite the bustling atmosphere of the faire, the stables were peaceful and quiet, the horses dozing. All six were loosely tied, waiting for their riders’ arrival, though it was noted that they’re allowed to roam freely on non-performance days. 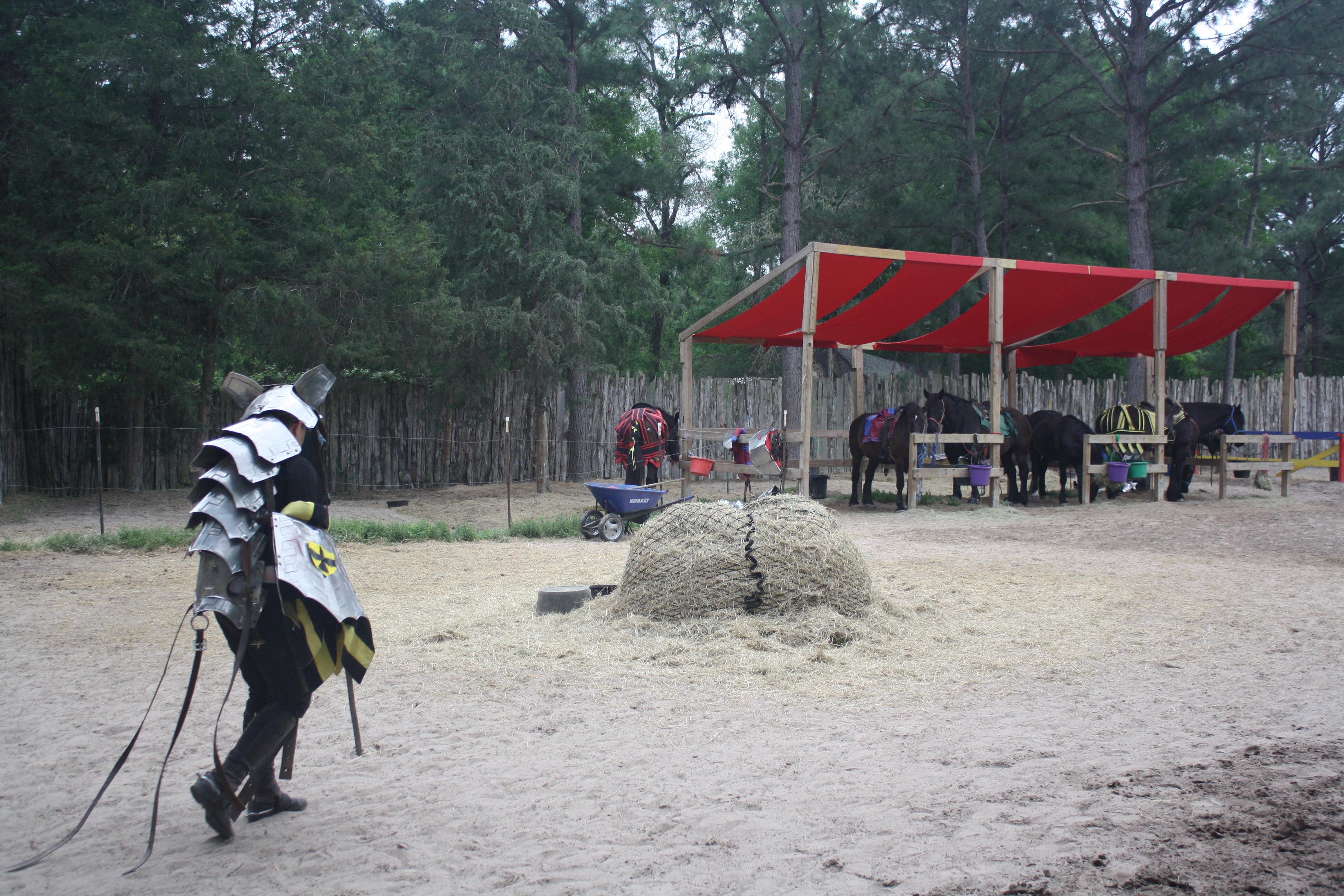 “We like them to be horses,” Shelby commented. “They’re allowed a lot of pasture time even if the space is small at events. They’re also kept on a forage-based diet with hay available 24/7.”

Shelby introduced me first to Abraham, glowing about his ability in the reining and western dressage arenas, along with his jousting skills. In fact, all of the horses’ training is based on classical dressage. The canter depart is paramount, as they must break into a full canter in a single stride. The stop is equally important, because the list — the field of play during the joust — is surprisingly small, sitting between 100 and 200 yards depending on the facility. All the horses are trained to respond to the rider’s seat and legs, since knights are taught to drop the reins so as not to pull the horse’s mouth if they take a hit.

Sir Andrew dropping the reins after a hit to protect his horse. 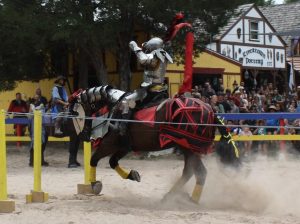 The last step in training is desensitization to the armor.

“They have to get used to knights falling off of them,” Shelby stated, “because it’s absolutely going to happen in a tournament. We don’t want the horses to be scared when it does.”

The training of the knights, the equipment, and even the rules of the sport are dictated by the horse’s safety. Shelby and Alexis emphasize over and over again that jousting is a horse sport first and a performance second. The safety of the horse comes above all else.

Sir William — a knight with over 20 years of experience — put it more bluntly when he said, “Without an understanding of the horse, we’d just be a bunch of idiots with sticks.”

Six to seven horses perform at the events and all of the knights agreed, “Everybody has their favorite.”

Titan, a 19.1 HH gentle giant, seemed to love attention. His dam, Annabelle, the 23-year-old matriarch of the stable, preferred to ignore the hubbub — and a certain roving reporter’s camera lens — to spend her time napping. 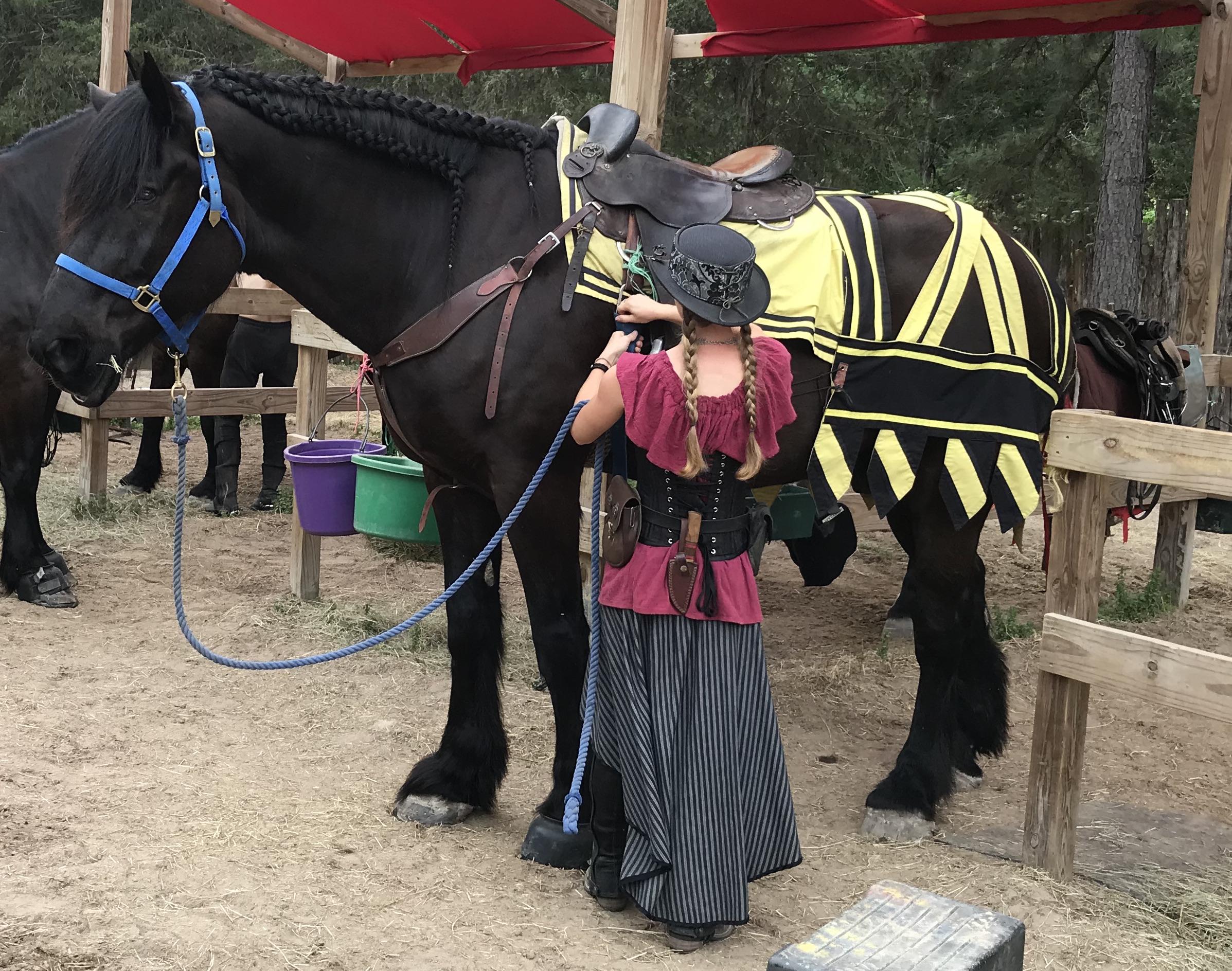 Tara, a “$500 Craigslist rescue that hates sheep,” leaned over the rail eager for attention from Alexis while Thor just looked toward the audience beginning to take their seats. 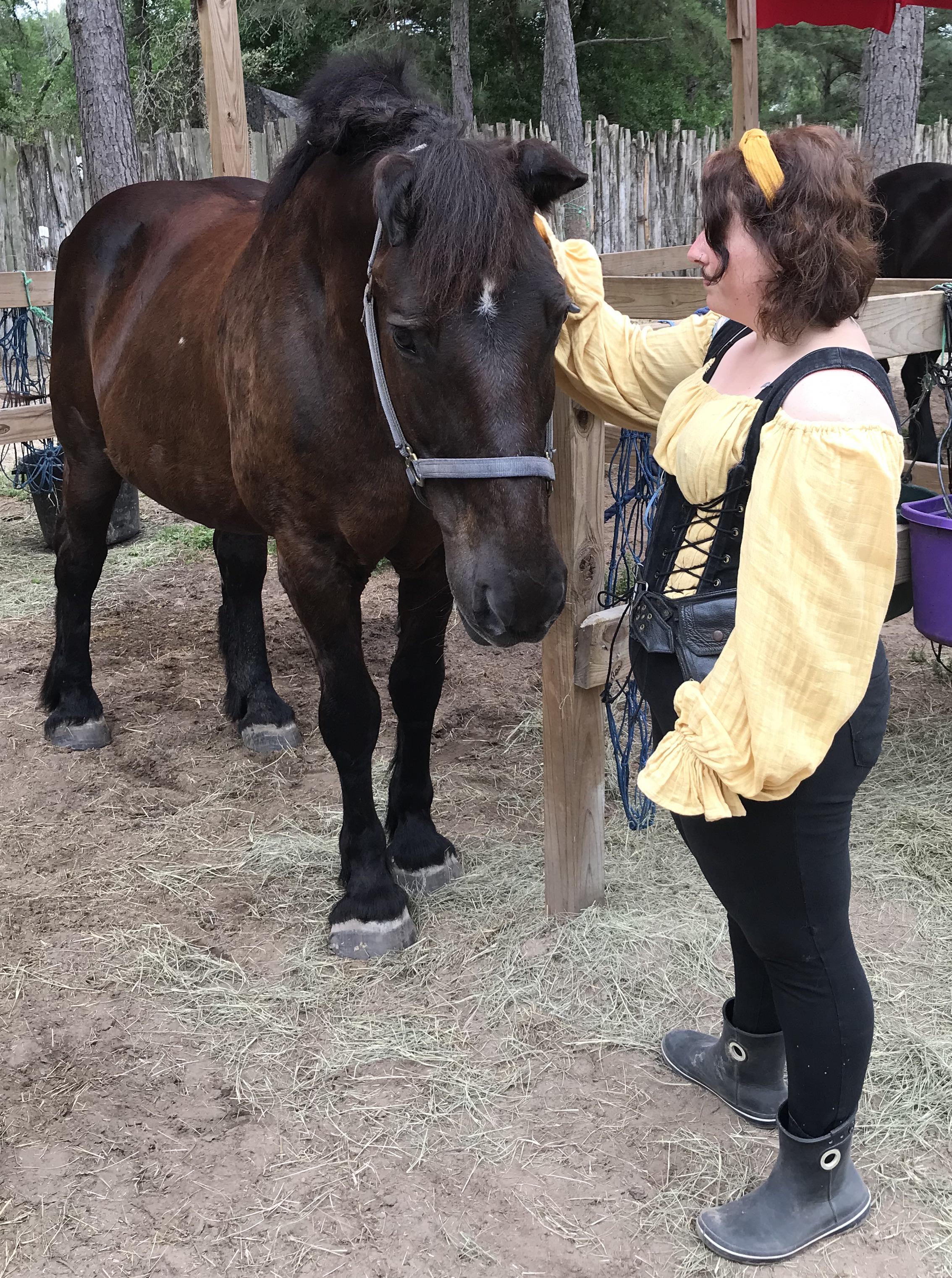 Shelby commented that Thor loves to joust but can “get a little anxious to go.” To that end, his riders have to be extra patient. If the excitement is too much — even during an event — the riders will stop the joust and reset. Everyone wants a clean, safe run.

Indigo is known for his intensity on and off the jousting field. It’s alright, Indigo, we at Horse Nation know every barn needs a boss. 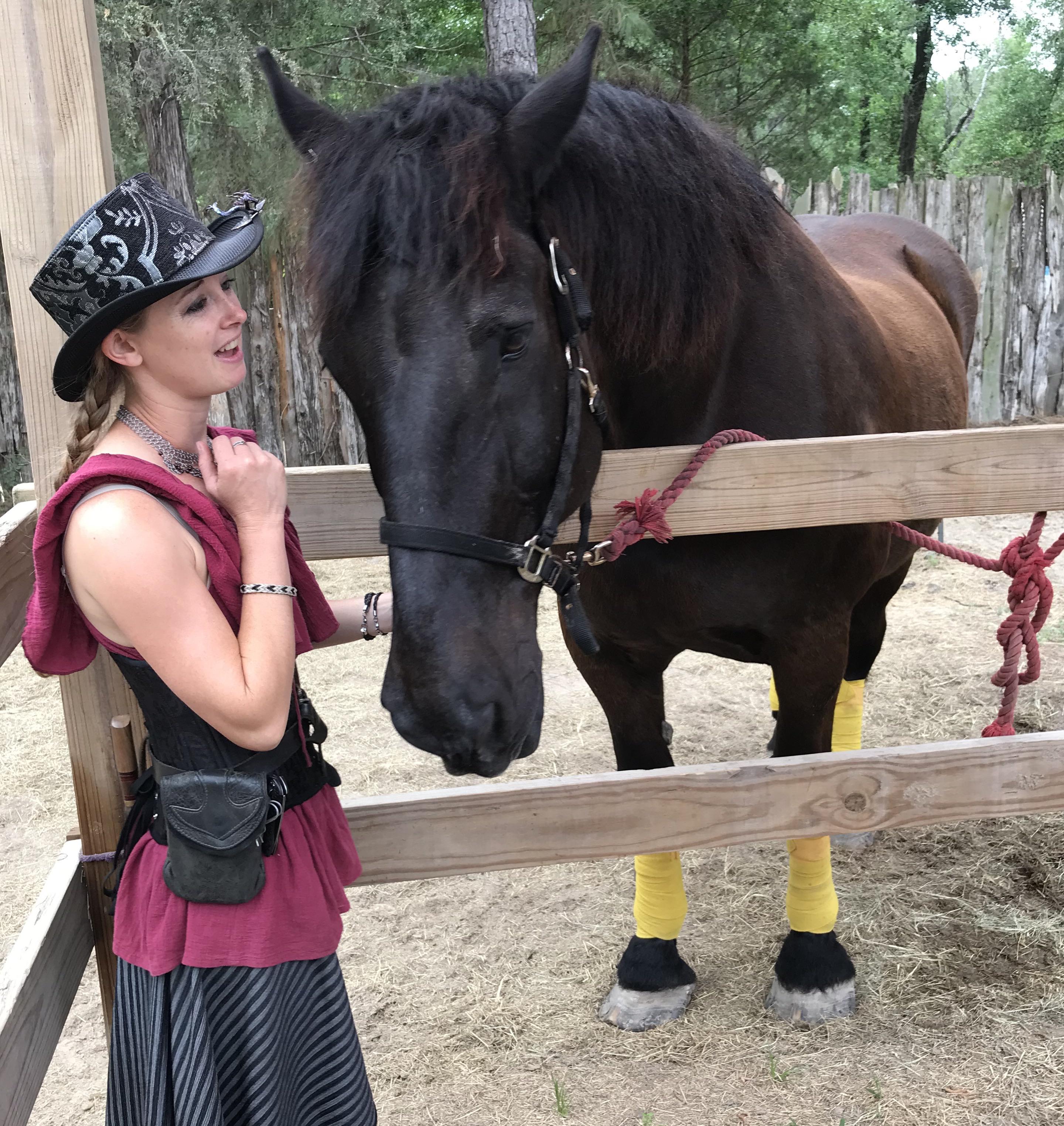 Sir William noted that “jousting can be emotionally and physically draining” so it’s the horses that are “soft and easy going” that do the best.

“The best horses know their job and get it done,” he said. “They’re okay with chaos. They manage their emotions. They don’t get wound up by loud noises and strange sights.” 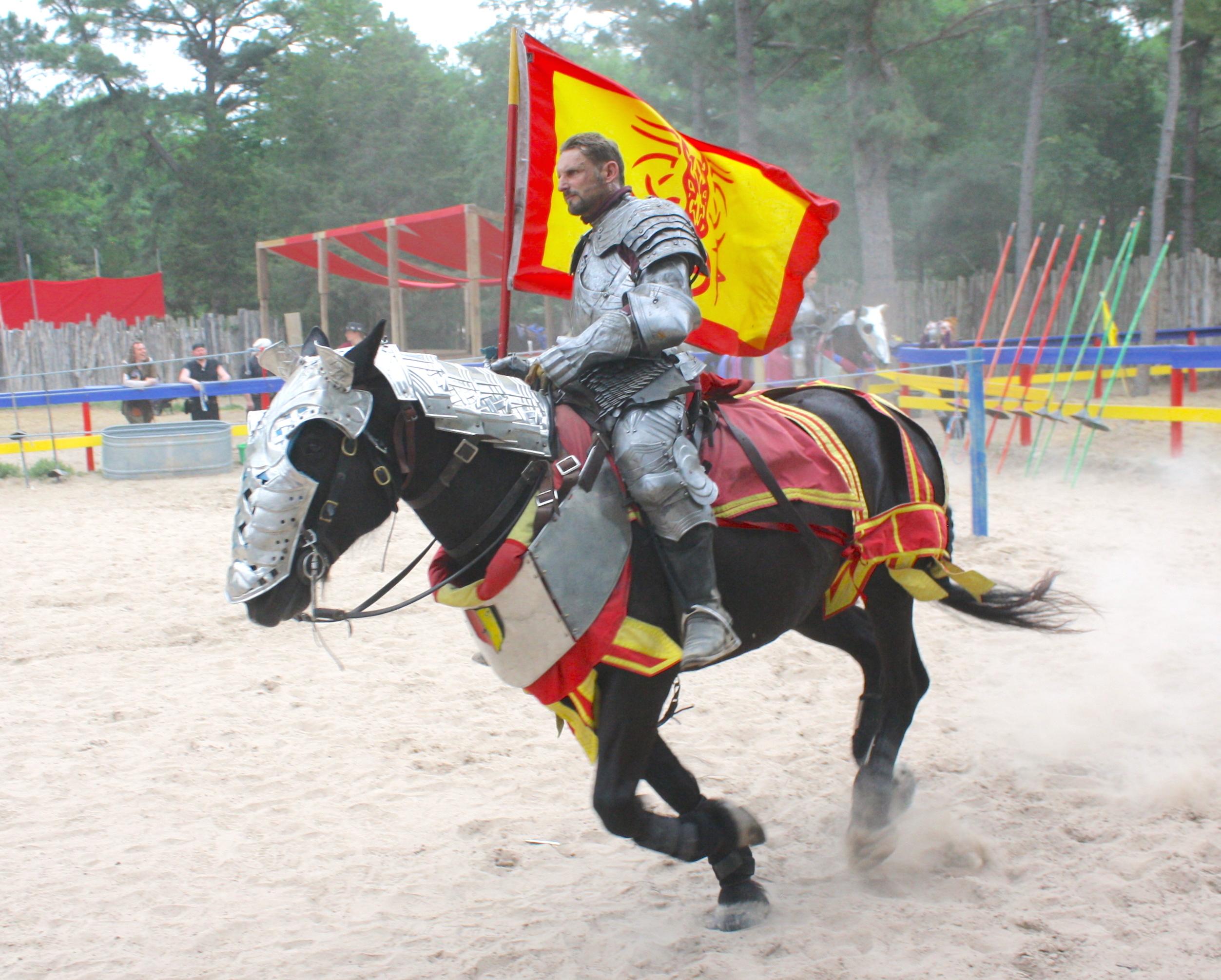 Larger horses — over 16 HH — are preferred and they must be well muscled and well built.

“They need to be physically capable of carrying a large rider and several hundred pounds of tack and armor,” Alexis said. “But also look good … look proportional.” 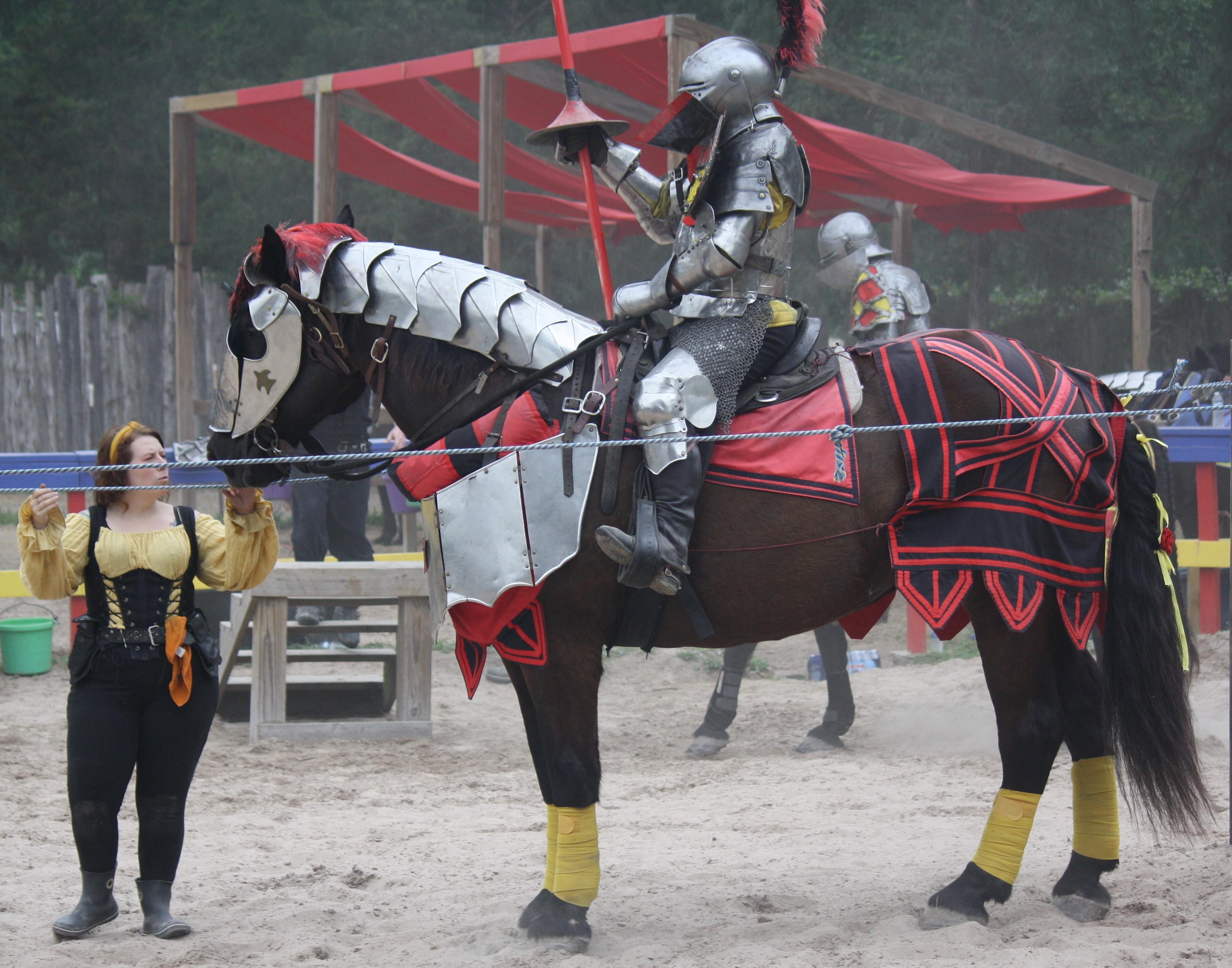 I was surprised to learn that many knights enter the sport with little to no horse experience.

Ten years ago, Sir Jacob retired from the military and “knew a guy that did [jousting]” in his home state of Minnesota, so he figured he’d give it a try. His favorite memory is the tournament three years ago when he went undefeated.

“It’s harder now without my favorite horse,” he commented. “She doesn’t compete anymore. She’s retired at home,” he added with a quiet smile. 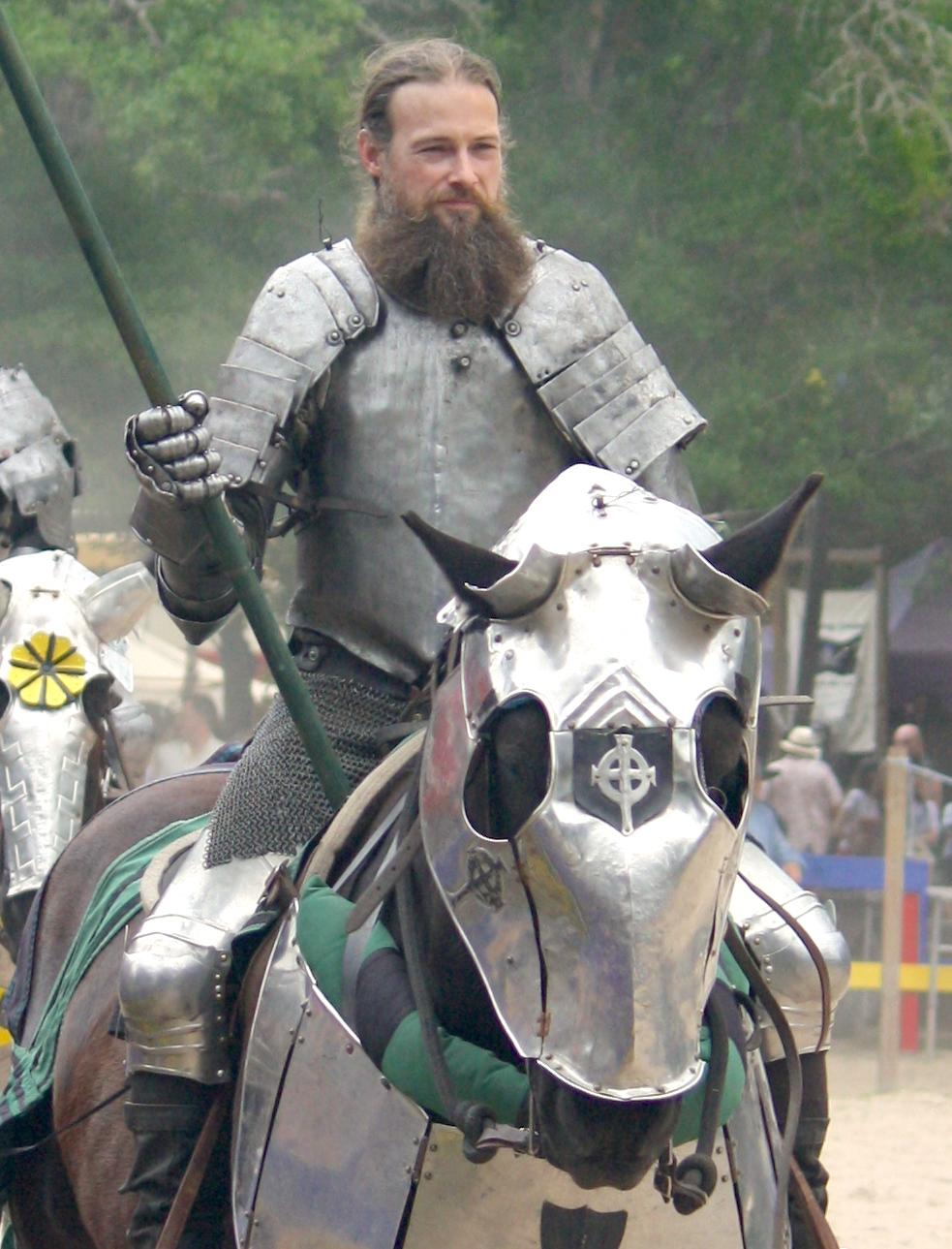 Sir William joked about one knight-in-training that — after lawn darting in spectacular fashion — stood up and yelled, “I thought I would roll!”

Dame Eleanor added, “Riding before certainly helps,” but “learning to fall is the key.” 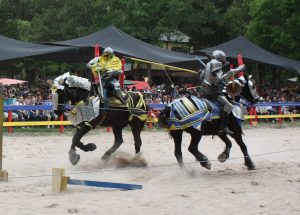 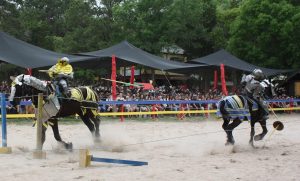 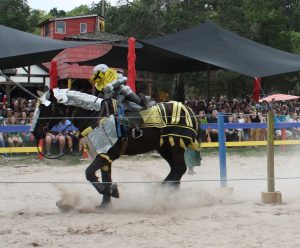 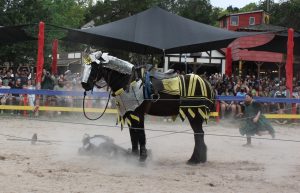 Knights train for falls by falling from a mounting block to the ground, wearing armor that weighs up to 100 pounds.

One of the most important aspects of the knights’ training — besides learning an independent seat — is lance control. Lances are up to 10 feet long and made of solid wood. Couching is the process of lowering the lance to sit perpendicular to the rider with one end resting in the armpit and the lance itself hovering at a 45 degree angle over the horse’s crest pointing at the opponent. 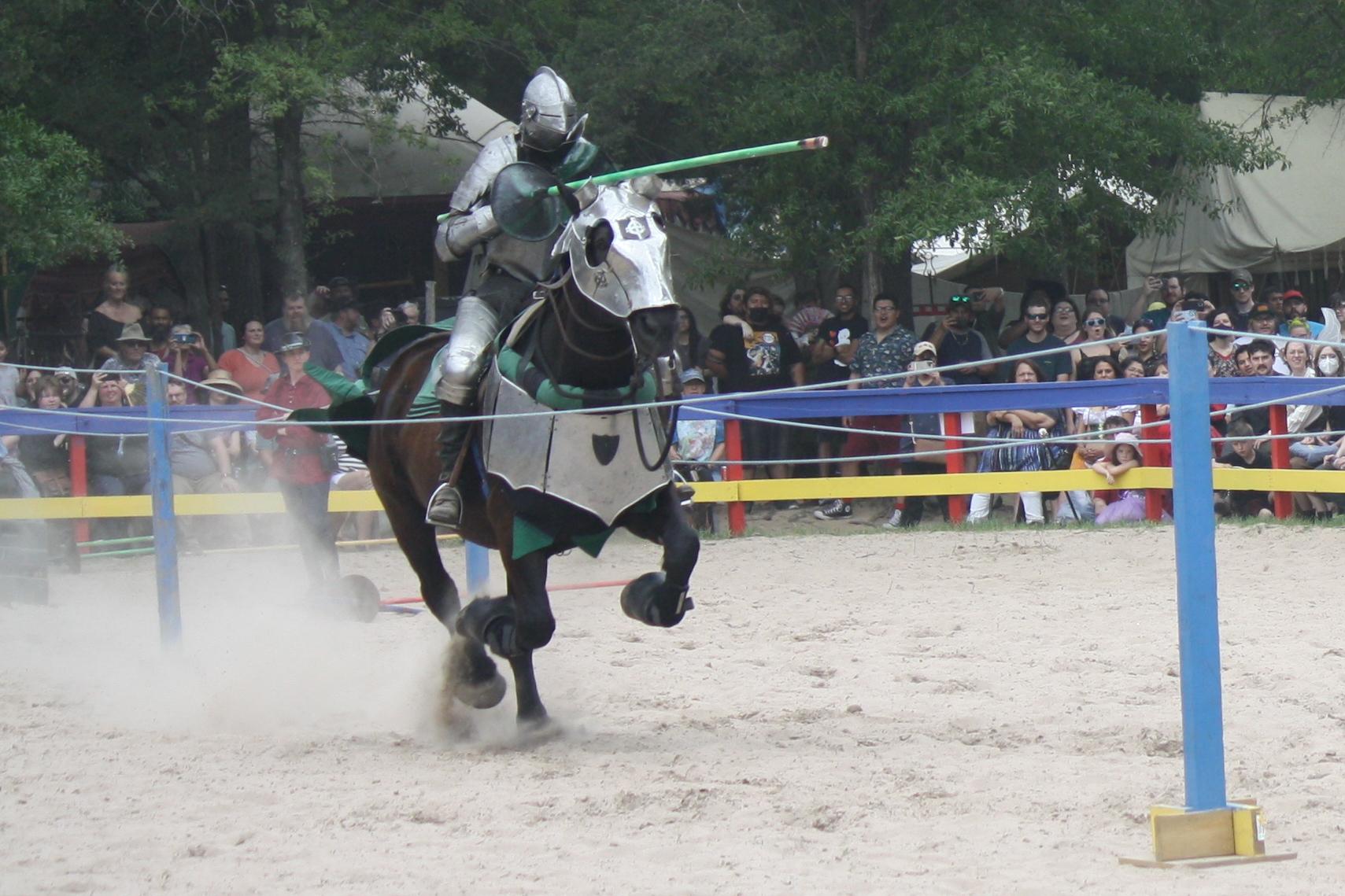 It’s a difficult maneuver even from the ground — my arm was wobbling after only three attempts — as the lance must be lowered with the utmost control so that there’s no chance of “dropping the tip” and injuring a horse.

The task is doubly difficult when you realize the knights are wearing full-body stainless steel armor, thick under layers and an excruciatingly heavy helmet with only the tiniest of eye slits and very little neck mobility. 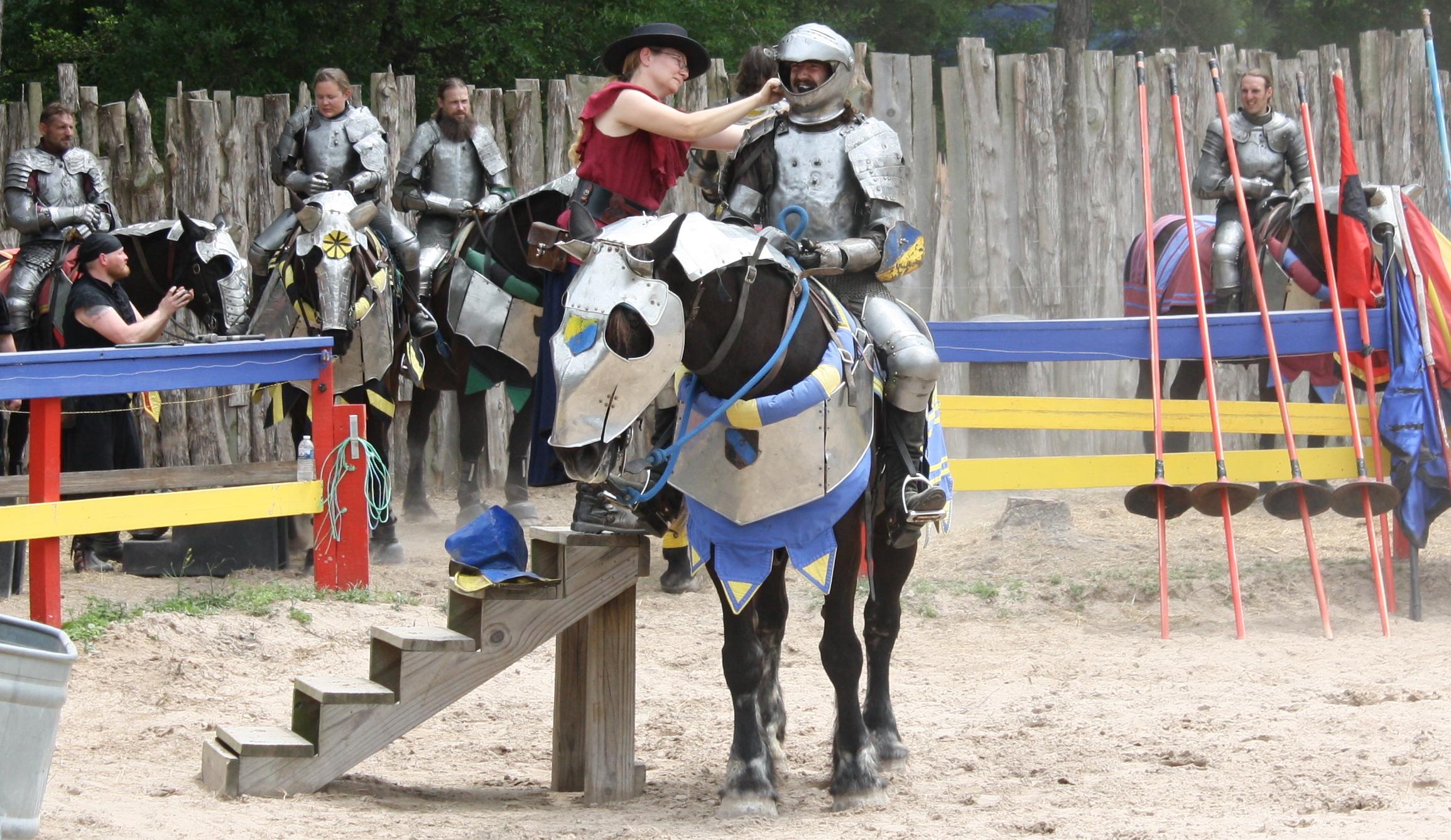 “They really can’t see their horse,” Shelby and Alexis both commented. “There’s a lot of trust involved.”

And, myth busted, there’s zero thrusting with the lance and if a knight jousted without armor … they would die. A Knight’s Tale lied to us, y’all.

As the knights continued to arrive at the barn and the main event quickly approached, I said my goodbyes to Alexis and Shelby and took my place at the rail. Warm-ups consisted of gentle trot and canter circles in each direction, with an emphasis on the stops and canter departs. There were a few back steps thrown in to activate the hindquarters. The horses appeared calm and unbothered despite the growing crowd and stood calmly at one end of the arena after their warm-up.

After being introduced, the knights paraded through the arena with a flag bearing their symbolic crest. There was some good-natured ribbing between opponents and appeals to the crowd for cheers. 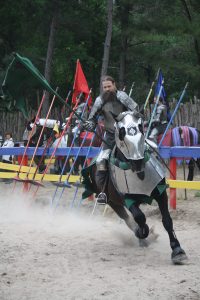 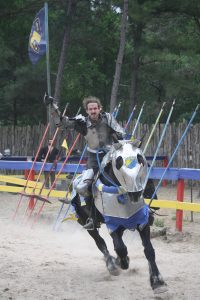 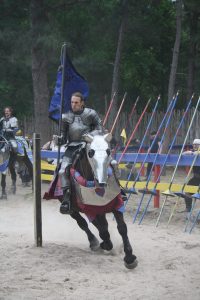 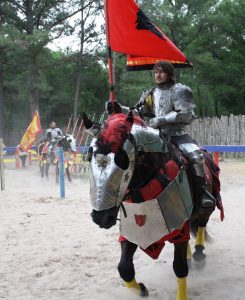 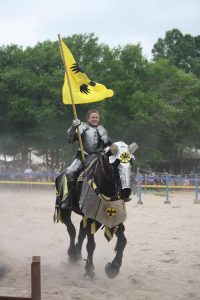 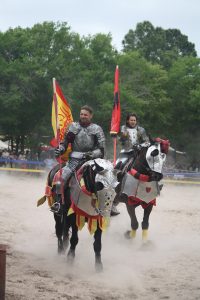 Then the real action began. A full-contact tournament conducted in a bracket format, the winner would walk away with a $1000 purse and a whole lot of bragging rights until next year.

Lining up in the list — always with their left shoulder to the inside and the lance in the outer right hand — there was a noticeable change of energy. 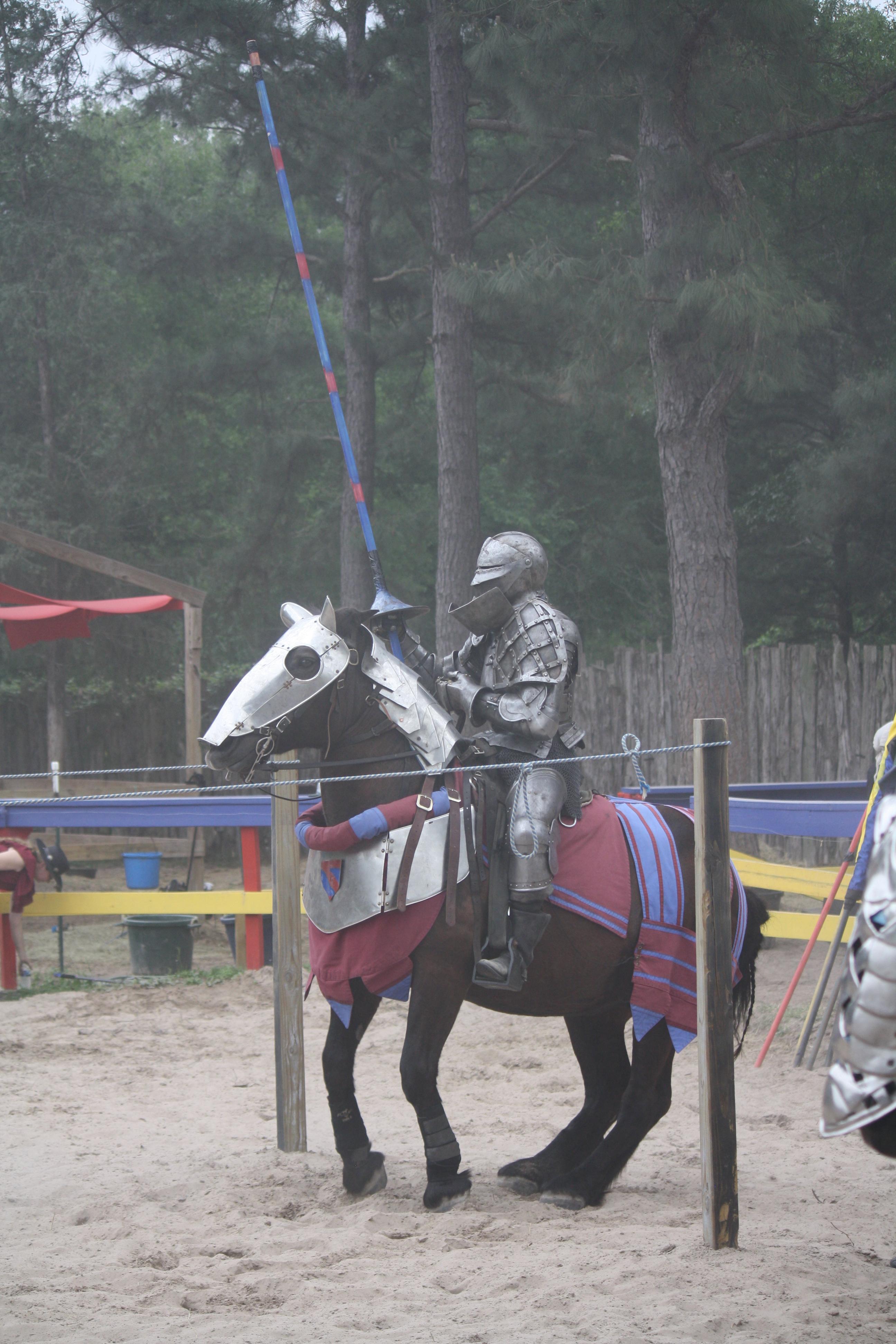 An electric charge ran through the crowd every time the horses took that first stride, a collective breath held until after the riders clashed, all of us gasping at the violence of the solid pine lances shattering into the air and most of us cringing at the metallic clank as an unlucky few hit the ground hard. 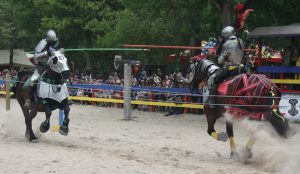 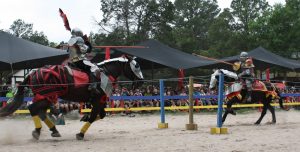 The tournament would prove tricky.

Sir Jacob’s mount seemed uncomfortable with a carousel set up near one end of the arena and his opponents unhorsed him not once, but twice.

Even Sir William, whom all the knights collectively referred to as “the hardest to beat,” was unhorsed. 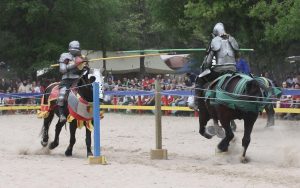 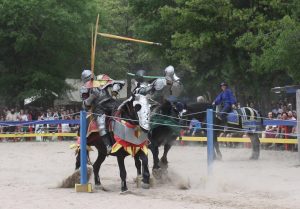 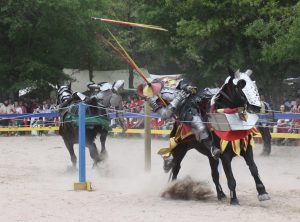 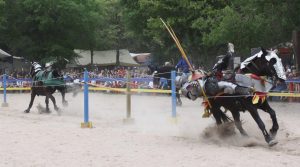 To be honest, I don’t know who won. I was too caught up in the spectacle. I’d watched these types of shows before, but this was a whole different animal. It was mesmerizing and fierce. It was spectacular because it was real.

And as one knight shouted toward the crowd, blood dripping down his chin, “And it’s only the first day!”

Afterward, the knights regaled the crowd, the pile of broken lances was hauled away, and the horses returned to their stalls. They seemed entirely relaxed as they munched on hay while being untacked and groomed and then were left to nap until the next round.

If you want the adventure of a lifetime, the New Riders of a Golden Age is currently hiring.