History is full of strange and fascinating practices. Not the least of which is tied to folklore designed to ward off evil spirits. This week’s Equus Obscurus focuses on the history of entombing horse skulls. Learn more:

“A canter is the cure for all evil.” – Benjamin Disraeli

In folklore — specifically of the British Isles and southern Scandinavia — burying a horse skull is said to provide not only good fortune, but also protective magic and superior sound acoustics. Let’s break it down.

Horses are often depicted as having supernatural qualities related to speed, strength, intelligence and fertility and are often tied to sun or ocean mythology. Celtic, Teutonic (Germanic), Gallo-Roman, and Indo-Aryan cultures — among others — worshiped horse or horse-like deities.

Many historians and archaeologists tie these beliefs to the use of horses as sacrifices in religious ceremonies. In Iron Age Scandinavia, for instance, horses were often sacrificed in bogs and wetlands. These uninhabitable areas were thought to be “passages to the Otherworld,” but, more practically, were used as borders between warring factions.

Sonja Hukantaival writes, “This is one reason … that the horses sacrificed in wetlands became liminal creatures keeping guard against the uncontrollable … the realm of the dead, of chaos and of anything unknown.”

All of which means my childhood trauma of watching Artax die is completely validated, because it’s basically a true story.

HOME IS WHERE THE HORSE SKULL IS

A building deposit is “an object deliberately concealed in or under a building.” These deposits have been discovered as far back as Neolithic times and can include “animal bones, coins, Stone Age tools, everyday household objects and personal objects.” Most were concentrated under the floor or around doorways and windows.

So, where once horses were sacrificed to protect a territorial border, now skulls were being used to protect the “border” of a specific structure.

The use of horses as building deposits dates back to the Bronze Age (approximately 3300 to 1200 BC), although it became much more common during the Iron Age (1200 to 600 BC) and is still found in some parts of the world today. Often only one skull is buried, though collections of up to forty have been found.

In Wales, these horse skulls were thought to “dispel the spirits.” In Finnish folklore, the burial of skulls was used as a preventative against witchcraft. In Ireland, horse skulls were considered sonsie that would bring prosperity and good fortune. 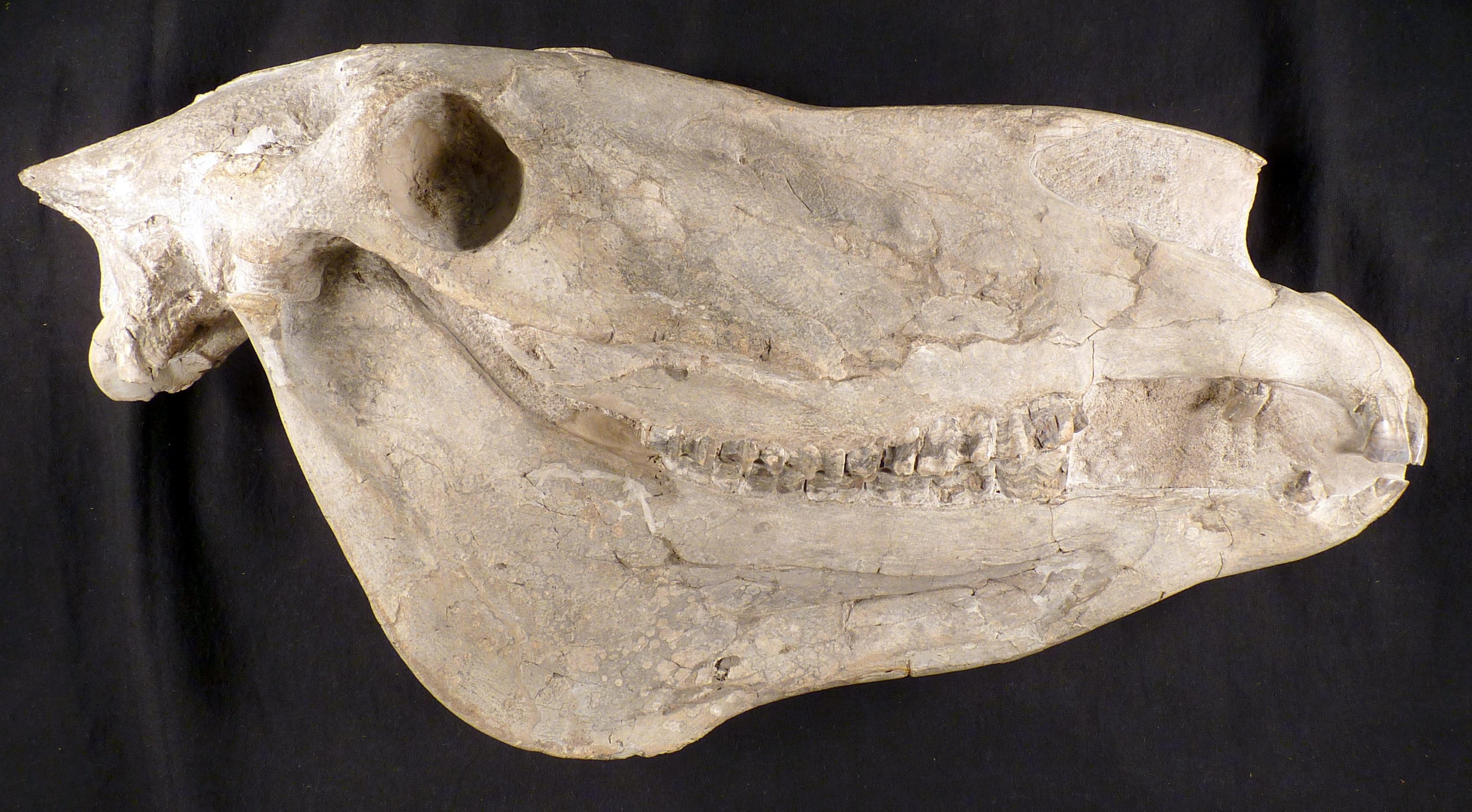 An account from Norfolk, England, in 1897 tells this story:

“[T]hey watched the workmen dig the trench for the foundations and then saw their uncle carefully mark the centre of the site by driving into the ground a wooden stake. The men gathered round while the uncle uncorked a bottle of beer, then the horse’s head was placed in the bottom of the trench, the first glass of liquor from the bottle was thrown on it, and, when the rest of the beer had been drunk, the men shoveled bricks and mortar on top of the head. It was explained … that this was an old heathen custom to drive evil and witchcraft away.”

“During the 1980s, when my grandaunt’s house was being renovated, something unusual was found beneath the floor. As the flagstones were lifted, two large horse skulls were revealed near the centre of the room. The house had been built in the 1840s and the horse skulls had laid undisturbed since then.”

“20 years later, when I was working on an archaeological excavation at Portmarnock, Co. Dublin [a] remarkable site … most of which dated from the 15th and 16th centuries AD … a horse skull appeared near the centre of the structure. A charcoal sample from the floor deposit was radiocarbon dated to c. AD 1491-1641, which suggests that building was most likely constructed during the 16th or early 17th century. This discovery was followed shortly afterwards by the unearthing of not one, but eight horse skulls in a second building at the site. They were closely packed together and again had been deliberately placed when the clay floor was thrown down. The skulls were all from stallions, the majority of which, were over 15 years old at the time of death.” 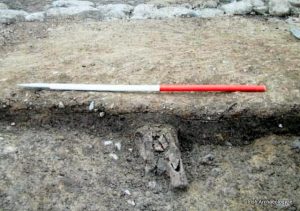 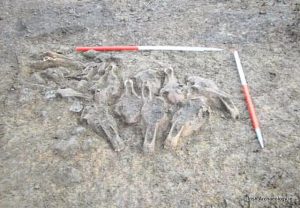 During the 1877 renovation of a church in Elsdon, England, these notes were taken:

“When the church was being repaired in 1877 three horses’ skulls were discovered in a small cavity just above the bells. Possibly placed there as a pagan protection against lightning or to improve the acoustics or even as an act of sanctification. They are now in a case in the church.”

While rare in the United States, there have been at least two discoveries of buried horse skulls. An 18th century home in South Deerfield, Massachusetts contained a horse skull concealed in an interior wall next to a fireplace.

“Wedged inside an eye socket was a piece of paper bearing the names of Colonel David Mason Bryan and his family, who moved into the house in 1848.”

And in Cahokia, Illinois, four skulls were found during the restoration of a two-story mansion dating back to 1807. The house, built for French entrepreneur Nicholas Jarrot, had a skull placed behind a wall next to the first-story fireplace, and three more on a load bearing interior wall, one directly over the doorway. 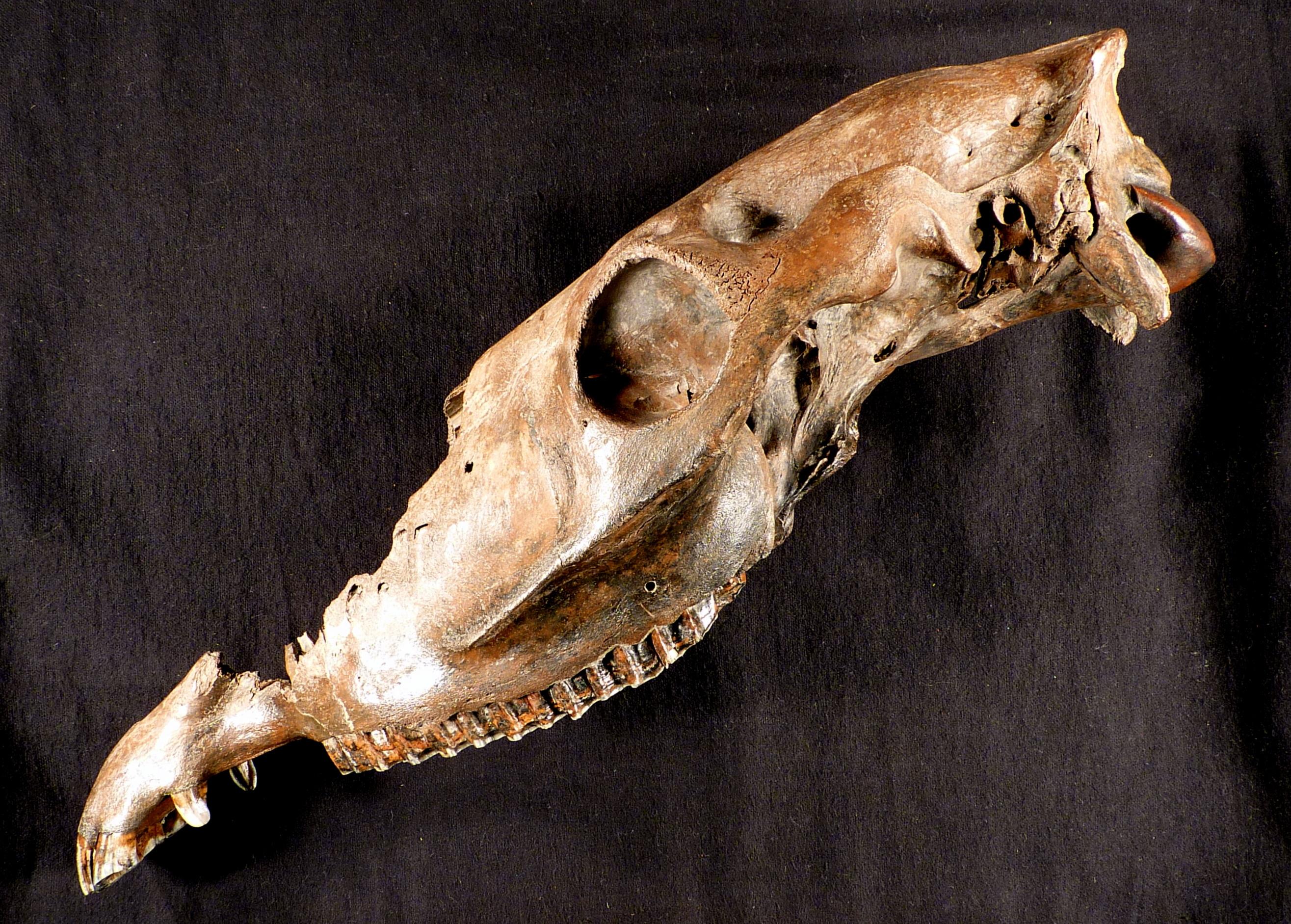 PUMP UP THE VOLUME

Many historians have found a more practical explanation for burying horse skulls beneath floors. Simply put, they create an echo. Ceramic pots have been buried in foundations as acoustic aids, so it’s not a huge leap to think that horse skulls could have been entombed in churches and homes for the same reason.

Hoggard describes a 1945 study conducted in Ireland in which almost every person surveyed knew of the practice of burying horse skulls:

“The explanation given in many cases was that doing this improved the sound when dancing took place before the fire. Similarly in Herefordshire at an inn … at least twenty-four horse skulls were found screwed to the underside of the floor where they were reputed ‘to make the fiddle go better.’”

Not to be discouraged, Hukantaival notes that in many cultures, loud noises were used to “expel evil forces.” So the practical use of horse skulls as amplifiers doesn’t necessarily contradict their more symbolic role. She also argues that cattle skulls could provide similar acoustics and would have been more readily available, but horses were obviously preferred. 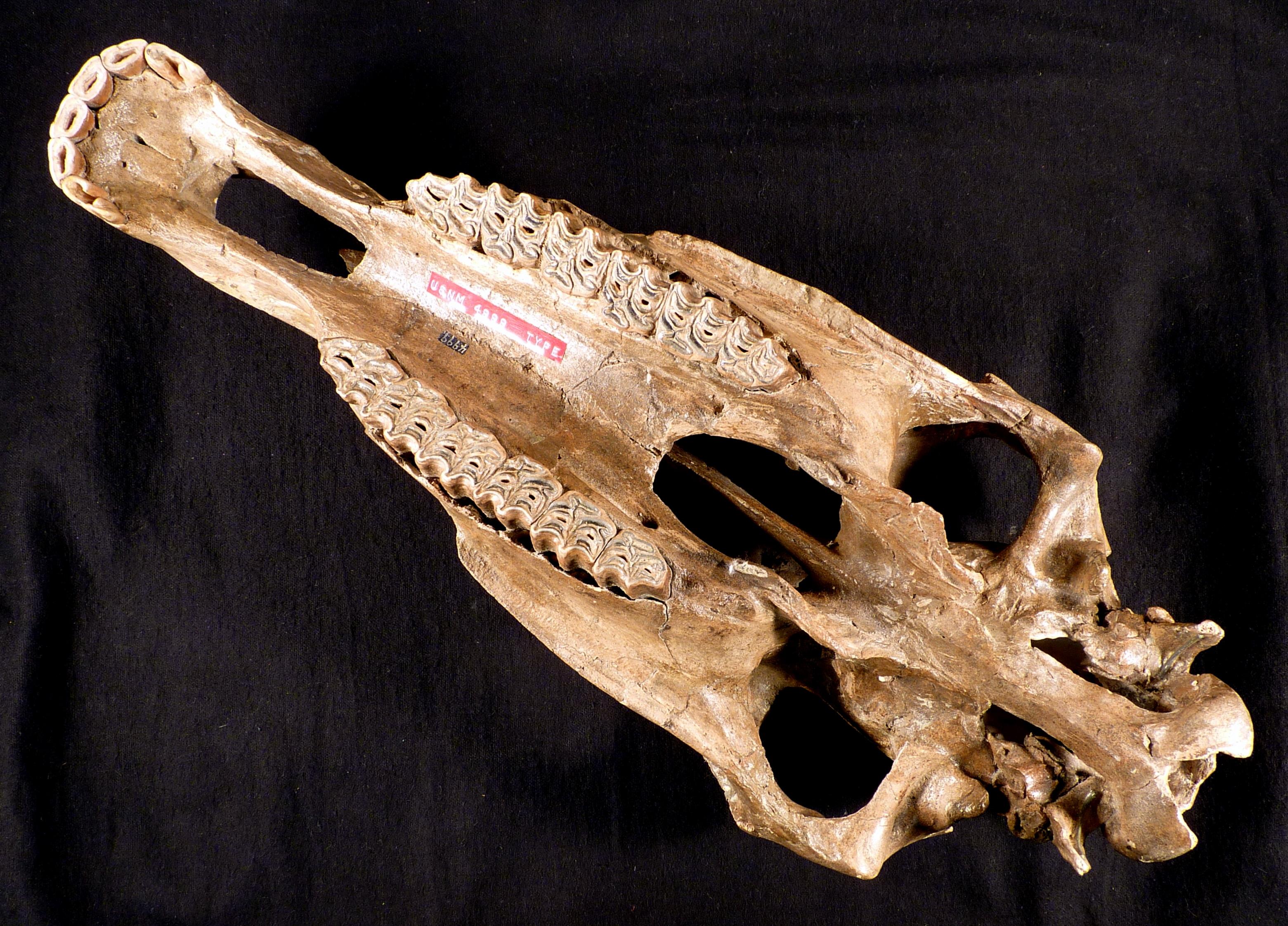 “The Archaeology of Counter-Witchcraft and Popular Magic,” Brian Hoggard, 2018, www.researchgate.net.

“Horse Skulls and ‘Alder Horse’: The Horse as a Depositional Sacrifice in Buildings,” Sonja Hukantaival, 2009, www.researchgate.net.