We all know the horse world can be a bit strange. This new series takes a deep dive into the weird, wild, and wonderful world of horses and history. This week, we take a look at horse armor.

“He paws in the valley, and rejoices in his strength;
He gallops into the clash of arm.
He mocks at fear, and is not frightened;
Nor does he turn back from the sword.”

One of the earliest archaeological examples of armor made for an animal is a Sumerian chest plate meant for an onager that would have been pulling a battle cart in 2500 B.C. Over the next two thousand years, as horses became increasingly involved in mankind’s wars, horse armor evolved for both protection and ceremony. These are a few of my favorites.

Although armor existed in Italy and Sicily dating back to the fourth century B.C. and Romans developed protective equipment for their heavy cavalry, it wasn’t until the medieval period and the Renaissance that horse armor really hit its stride. From 500 to 1600 C.E., the “mounted warrior” became a symbol of chivalry, heroism, and, last but not least, wealth.

“By the mid-fifteenth century, metal plates and leather were the dominant materials for all elements of horse armor, and a “full bard” now comprised a shaffron (head defense), closed neck defense (crinet), chest defense (peytral), panels for the sides (flanchards), and a rump defense (crupper). Caparisons (large textile coverings for the entire horse) disappeared from battlefields but remained a decorative feature for tournaments and other ceremonial occasions until the late sixteenth century.”

Mirroring their modern counterparts, medieval and Renaissance equestrians loved a matchy-matchy ensemble. Very often the horse and rider’s armor were created by the same workshop and included intricate details.

The Met has this to say about one of the few surviving examples from the 16th century: “The horse armor is covered with etched ornament that includes undulating foliage, mythological creatures, winged putti, and heroes from Biblical and Classical history, such as David and Goliath and Marcus Curtius.” 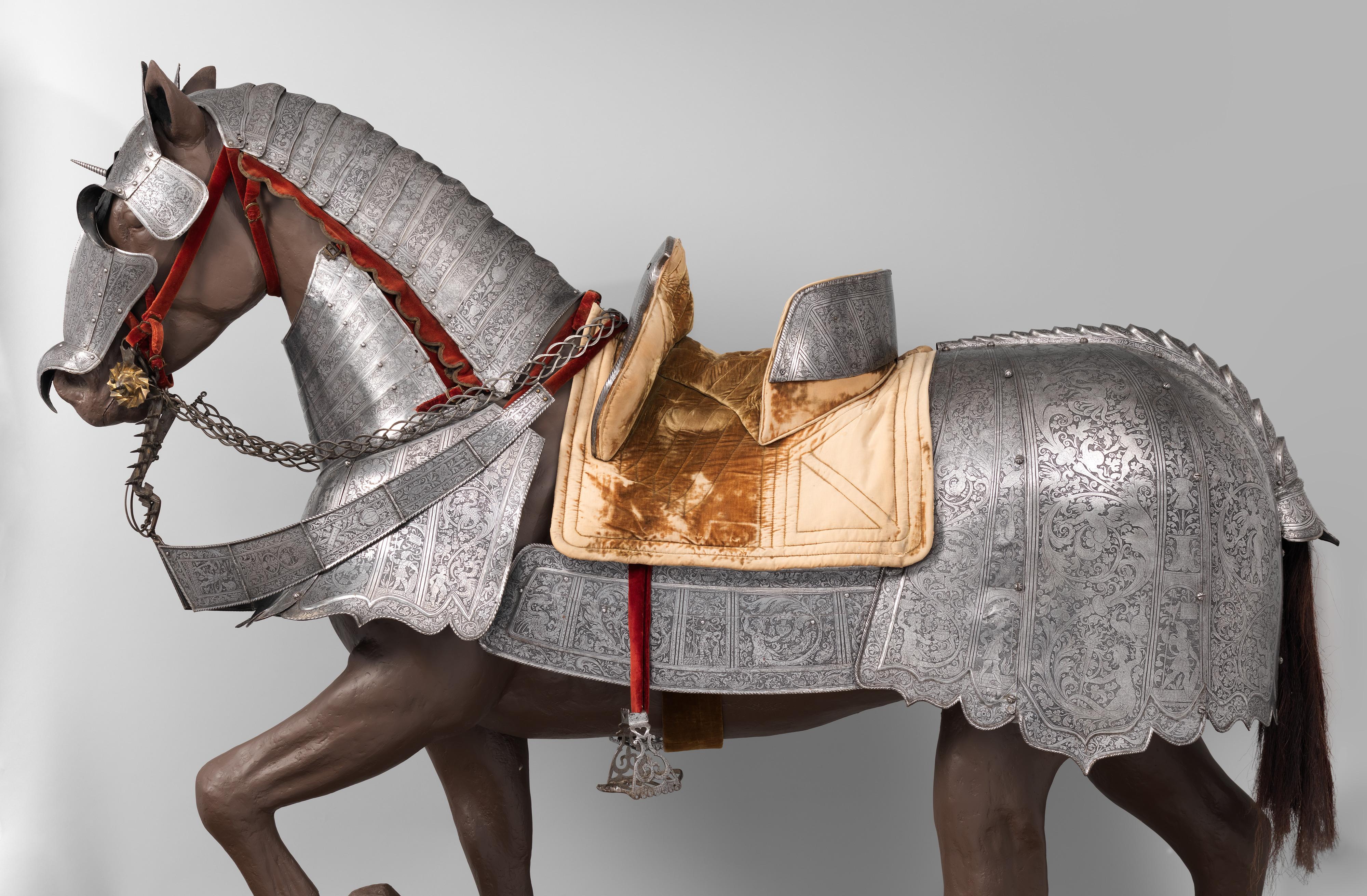 One piece that offered the most opportunity for extravagant styling choices was the shaffron. 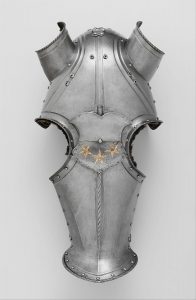 Shaffron with arms of the Freyberg family, ca. 1540 German, probably Landshut, The Met. 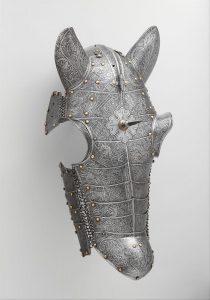 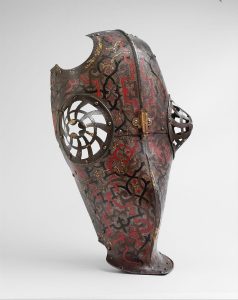 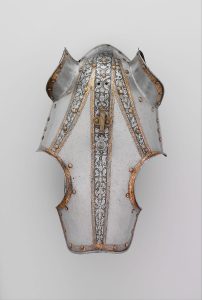 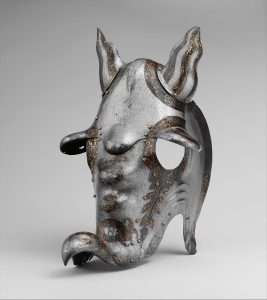 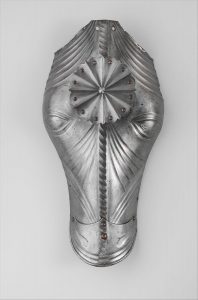 From 1600 to 1800, Native American tribes embraced the use of horse armor and masks.

As described on the Lewis and Clark expedition among the Shoshone in 1805: “They have also a kind of armor which they form of many folds of antelope’s skin [and] unite with glue and sand. With this they cover their own bodies and those of their horses. These are sufficient against the effects of the arrow.”

Eventually, guns made leather armor obsolete, but many tribes continued the use of horse masks until 1890. Perhaps, like the conquistadors’ shaffrons from which the design was inspired, they hoped to strike terror in their enemies.

“… their horses [were] prancing and running in every direction and they were the most fantastically dressed of any I have ever seen. The chiefs had considerable red about them. Their horses were also dressed to suit their liking, no two alike. One horse I noticed with a buffalo’s scalp, horns and all, on his head…” 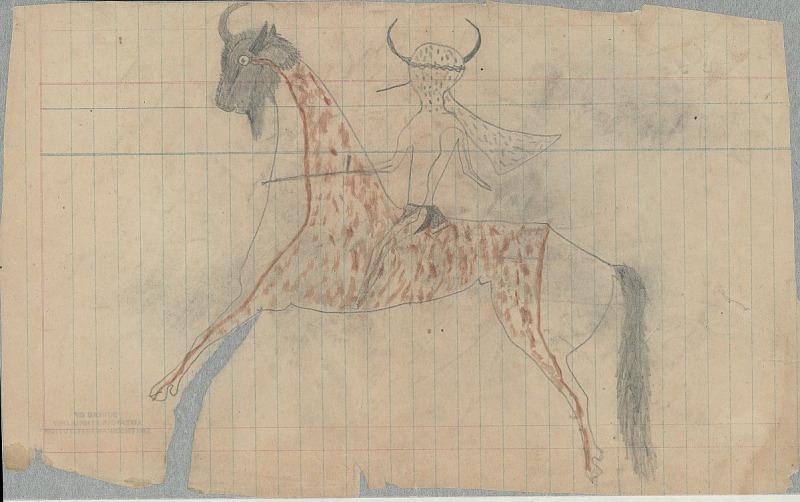 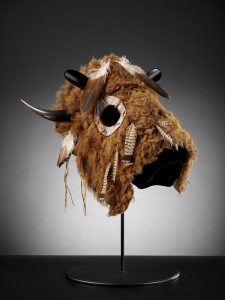 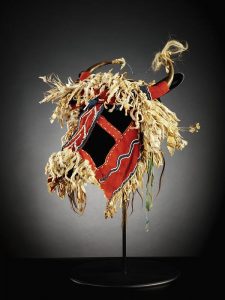 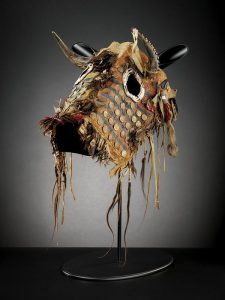 Samurai warriors helped govern Japan for almost a thousand years. While the katana gets all the glory, horseback archery was the samurai’s first and primary form of fighting. Horse armor wasn’t developed until roughly the seventeenth century, though some historians argue that it was used mostly for ceremonies and special occasions rather than actual battles.

History Place states, “Of particular note is armor of the tatehagidō type (early Edo period, 17th century), shown with horse armor (bagai), a horse mask (bamen), and horse tack (bagu, early to mid-Edo period, 17th–18th century). Horse armor was made of small tiles of pressed leather lacquered in gold and sewn onto cloth. A mask crafted of boiled leather that was shaped and lacquered to represent a stylized horse or dragon protected the horse’s head.”

And man, oh man, did the bamen get extravagant. 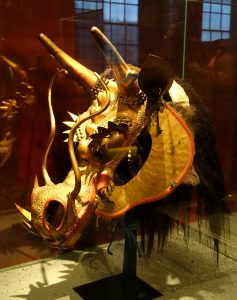 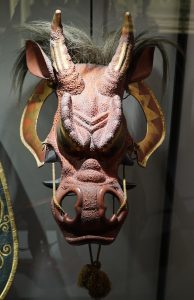 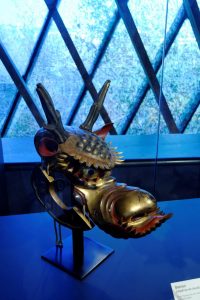 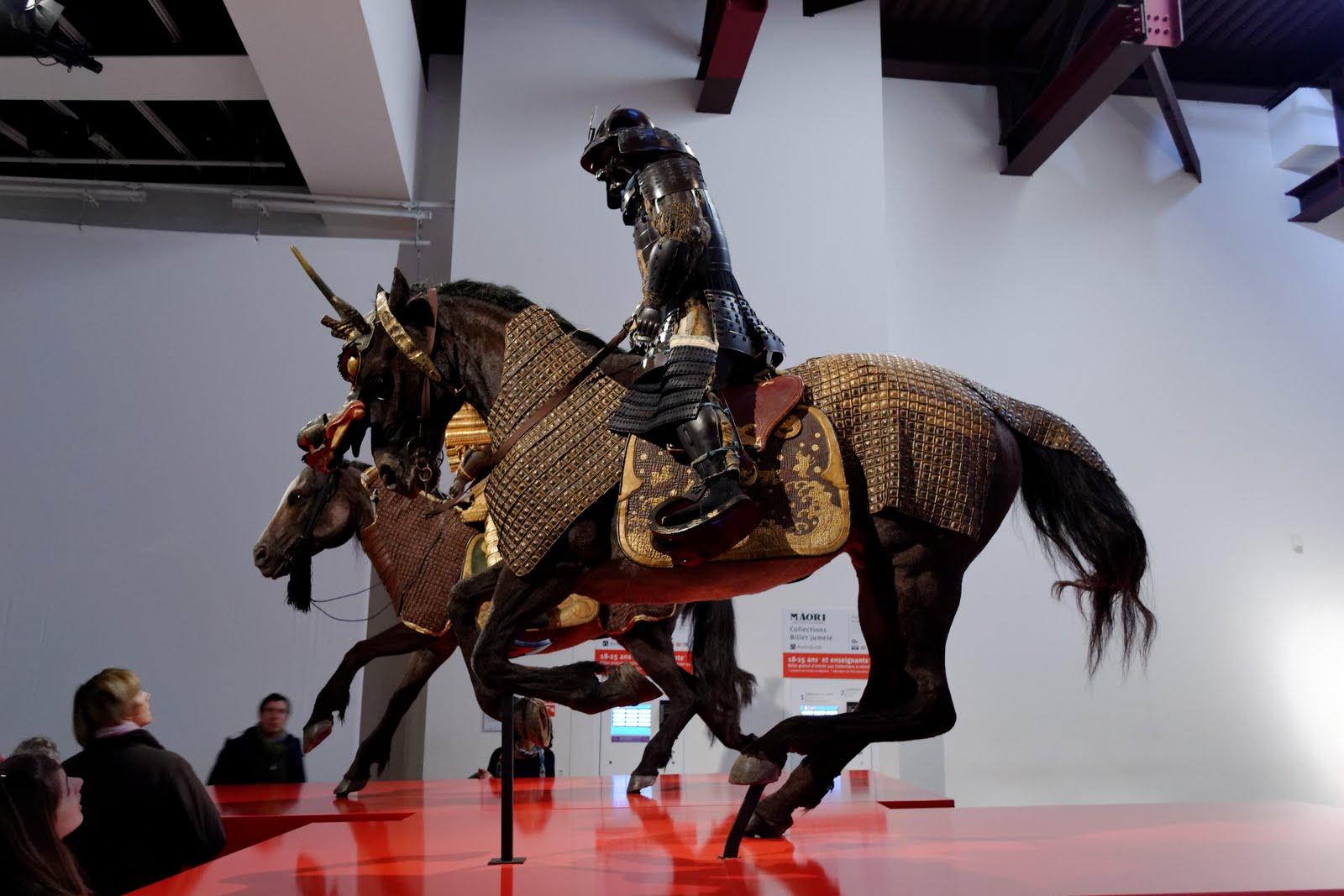 Do you know of some weird, wild, and wonderful artifacts from horses and history? If so, let us know and we’ll feature it here. Email your suggestions to [email protected]. Put Equus Obscurus in the subject heading.