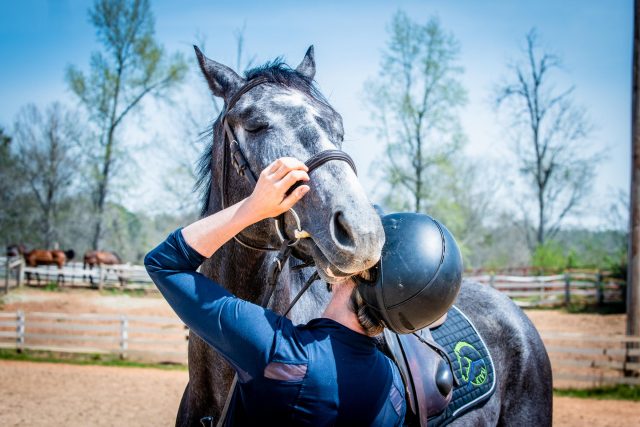 Aubrey Graham has brought home a number of fresh-off-the-track Thoroughbreds. In this week’s edition of Thoroughbred Logic, she discusses how she helps them make the transition to her facility.

Welcome to the next installment of Thoroughbred Logic. In this weekly series, Anthropologist and trainer Aubrey Graham, of Kivu Sport Horses, will offer insight and training experience when it comes to working with Thoroughbreds (although much will apply to all breeds). Come along for the ride as she offers her logic on bringing a fresh off-the-track Thoroughbred home.

For Thoroughbreds, the first week(s) off the track are always interesting, telling, and often, frankly downright stressful. Some horses take to post-track living like they have been practicing for it their whole life. For others, the shift away from the regulated stall-track-stall-hotwalk-stall is like having a carpet ripped out from under them. Most fall somewhere in between. That said, it is rare that one will come through the barn without teaching me something new in that first week or two.

Right now, I’m actively dealing with all the above. In the past two weeks, I have had three (well, technically, four if I count a filly for a friend) horses ship in from distinctly different situations. Of the geldings, one is what I would call “tracky,” one had an abscess, and one was nearly feral and took up a hunger strike when he arrived. When looked at collectively, these three shed light on what these horses go through as they adjust to sporthorse life, and the hoops that we as owners and re-trainers jump through trying to keep them alive and happy. 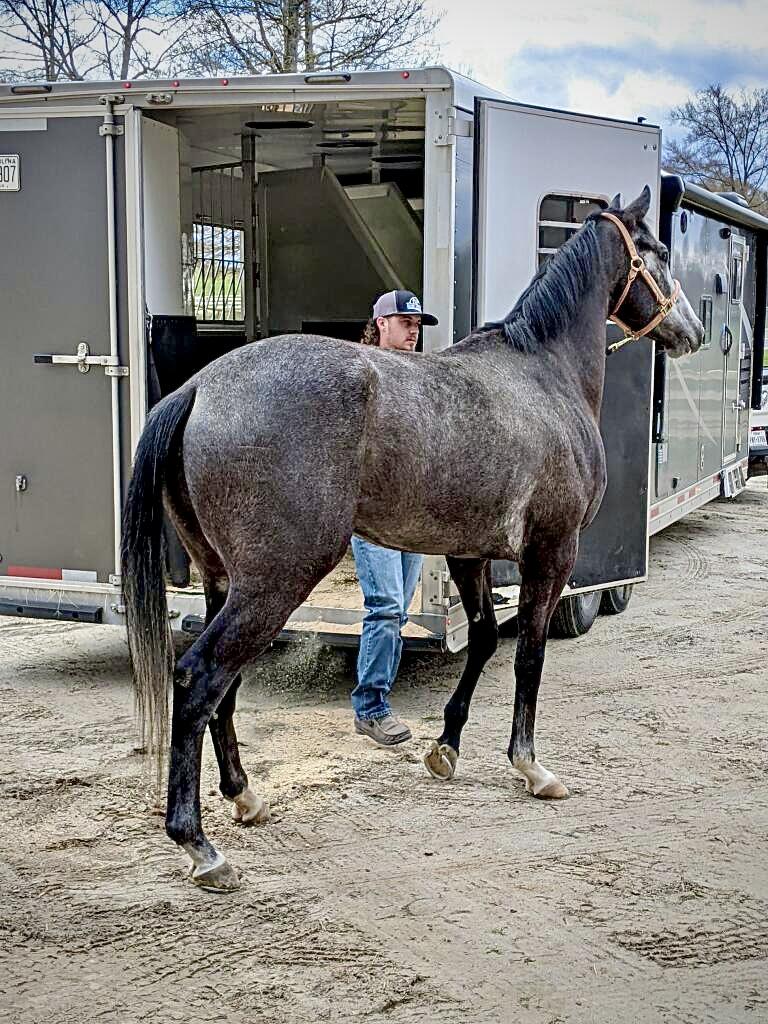 Louisiana Bling (“Tuck”) steps off the trailer, having just hauled from the track in Houston to just south of Atlanta. Photo by Amanda Woomer.

Years ago, when I purchased Forrest (JC Don’t Noc It) – my first straight-from-the-track horse – I went searching for resources to help me prepare for his arrival. I poured over the New Vocations Off-Track handbook and hopped on phone calls with folks who often trained Thoroughbreds. All those resources answered some questions but I’m not sure a single resource prepared me the skinny red tornado that was about to literally launch off the rig.

Forrest had had a long, uncomfortable, 30 hours of travel jammed into a narrow slant trailer (I had a contract stating he was in a box stall – yeah… I wasn’t thrilled either). When he arrived, it turned out that the supposedly reputable shipper had been sending me updates about the large bay next to him. That was a cluster from end to end. The bay was sweet, kind, eating and drinking well. My redhead was largely none of those things: anxious, hard to handle, and the worst thing — not drinking at all. 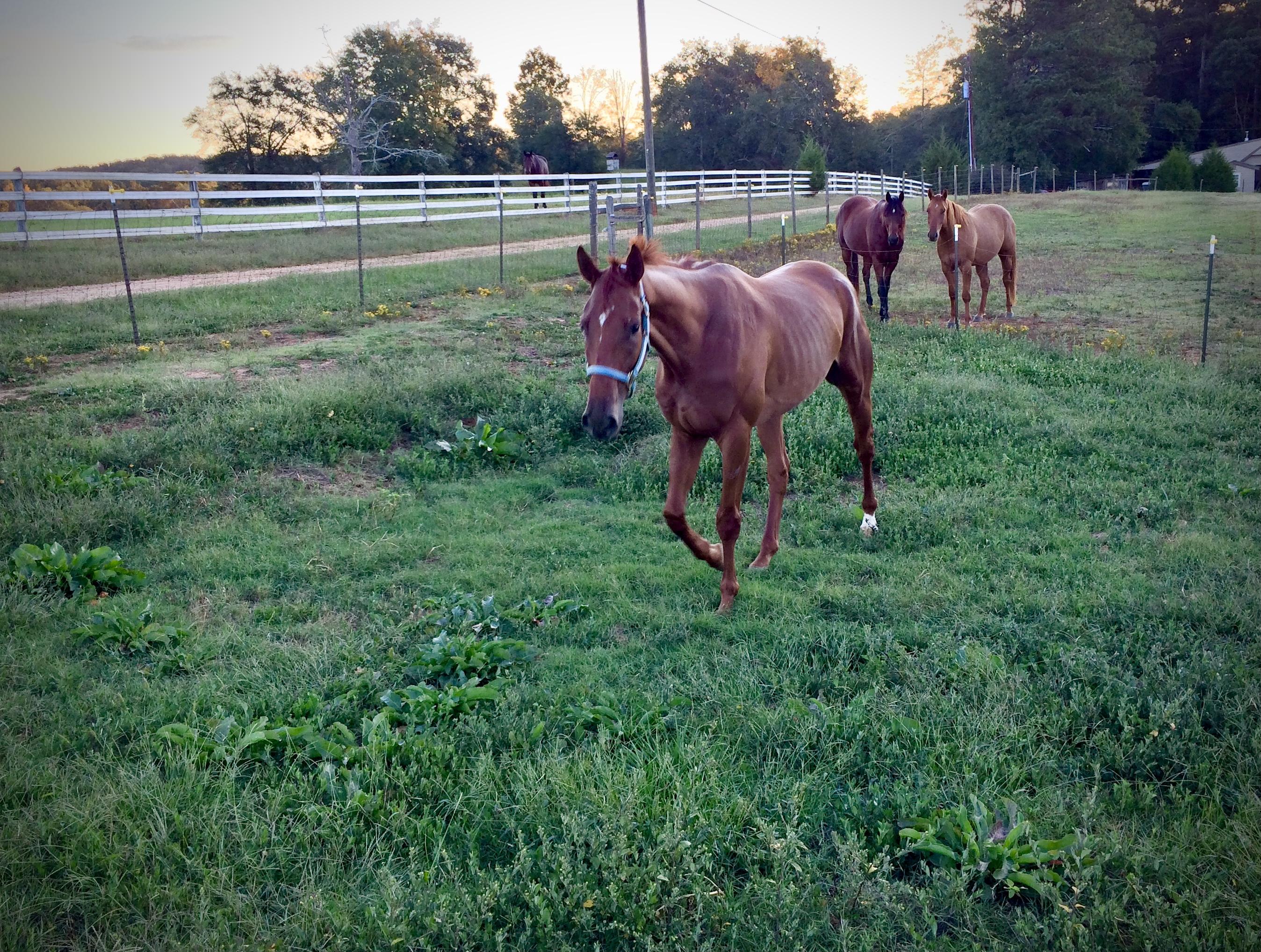 Skinny, dehydrated, track-fit Forrest on the day he arrived at my farm back in 2017. Photo by author. 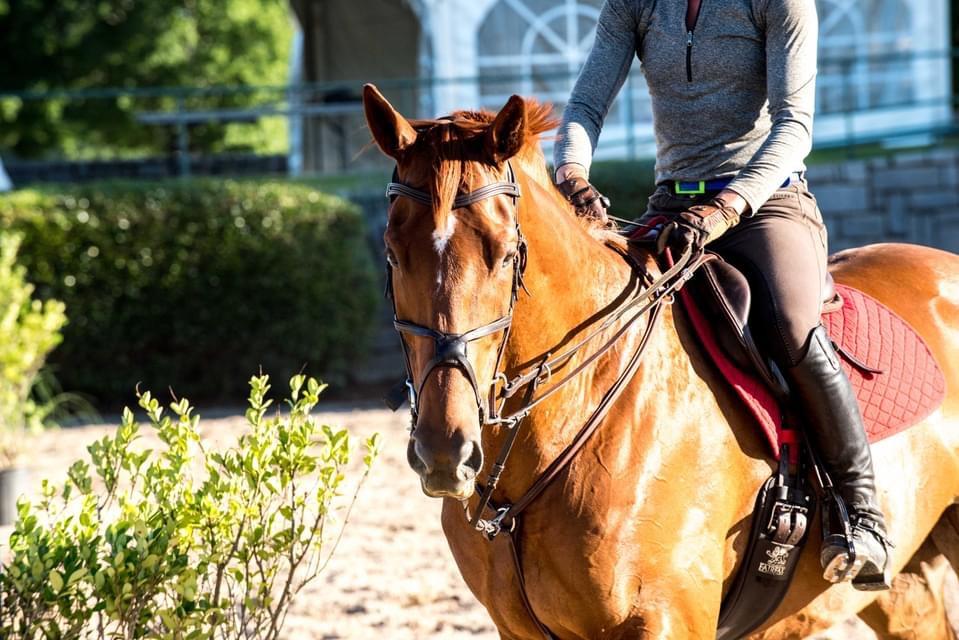 During the first week after a new horse ships in, I now expect to have to handle challenges with the essential components of food, water and turnout. And in between — in the walking back and forth, in the grooming, treating their ailments, nicks and scrapes, and mucking their stalls — I work to figure out who they are and what they need to be comfortable. (I also address their feet in this time frame, but the last two articles covered that). Sometimes I will hop on during that week and see who they are under saddle. More often than not though, I trade out their race plates if they’re straight from the track/brush the cockle burrs out of their forelock if they’re from the field, and just let them settle in. 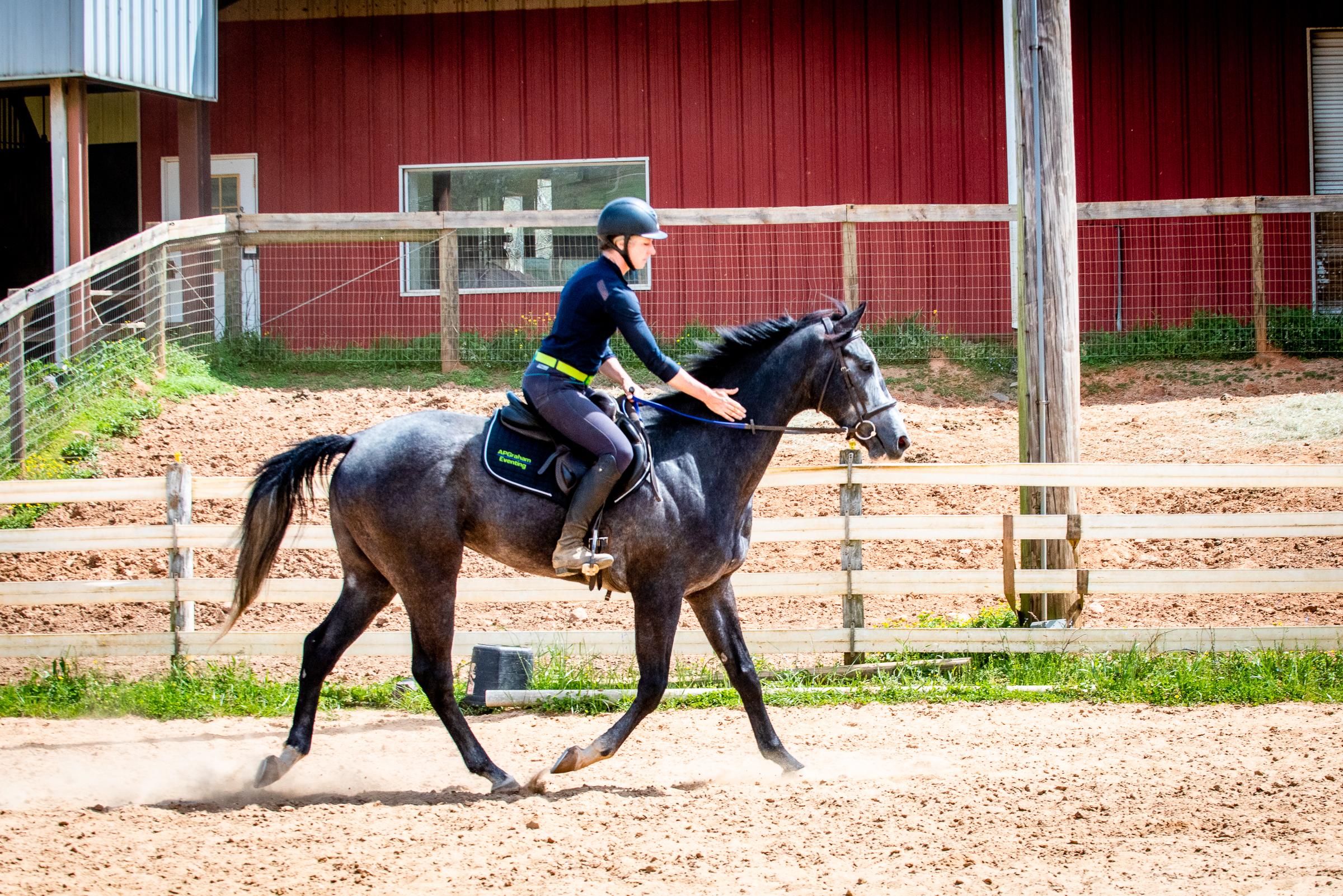 I hopped on Tuck (Louisiana Bling) for the first time after he had been here for about a week. Good Tuck. Photo by Kelly Robison.

Two weeks ago, Shane and I flew to Houston for a wedding. Realizing we were near the track and that the races were on (but we inevitably missed them), I reached out to my connections and talked my way onto the back side. I wasn’t really planning on horse shopping, but a big, sloping shouldered gray left me little option. I shuffled money, made it happen and got his shipping set up. I mean, this is what everyone does when they go to a wedding, right?… no? Hmmmm… 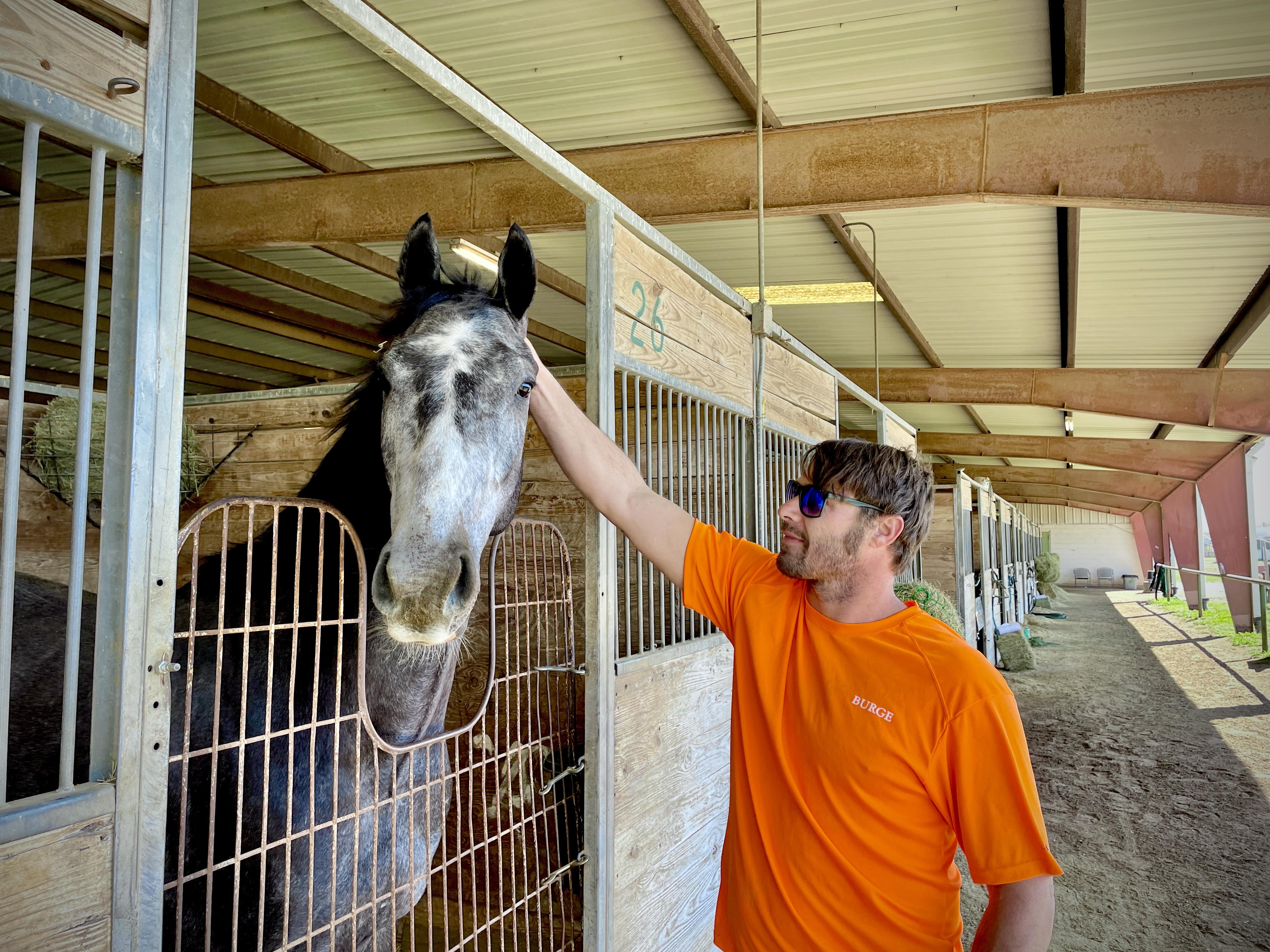 Shane and Tuck on the backside of the Sam Houston Track. Photo by author.

Louisiana Bling, AKA “Tuck”, makes a good example of a particular form of On-Track horse. He has for most of his broke-to-ride life known only the track. Unlike the other two that I hauled in a little later that week, his owners did not have a “home farm” for him to retire to or hang out at during the off-season. Tuck has largely lived between his stall, his hot walker and his workouts at a variety of different tracks. 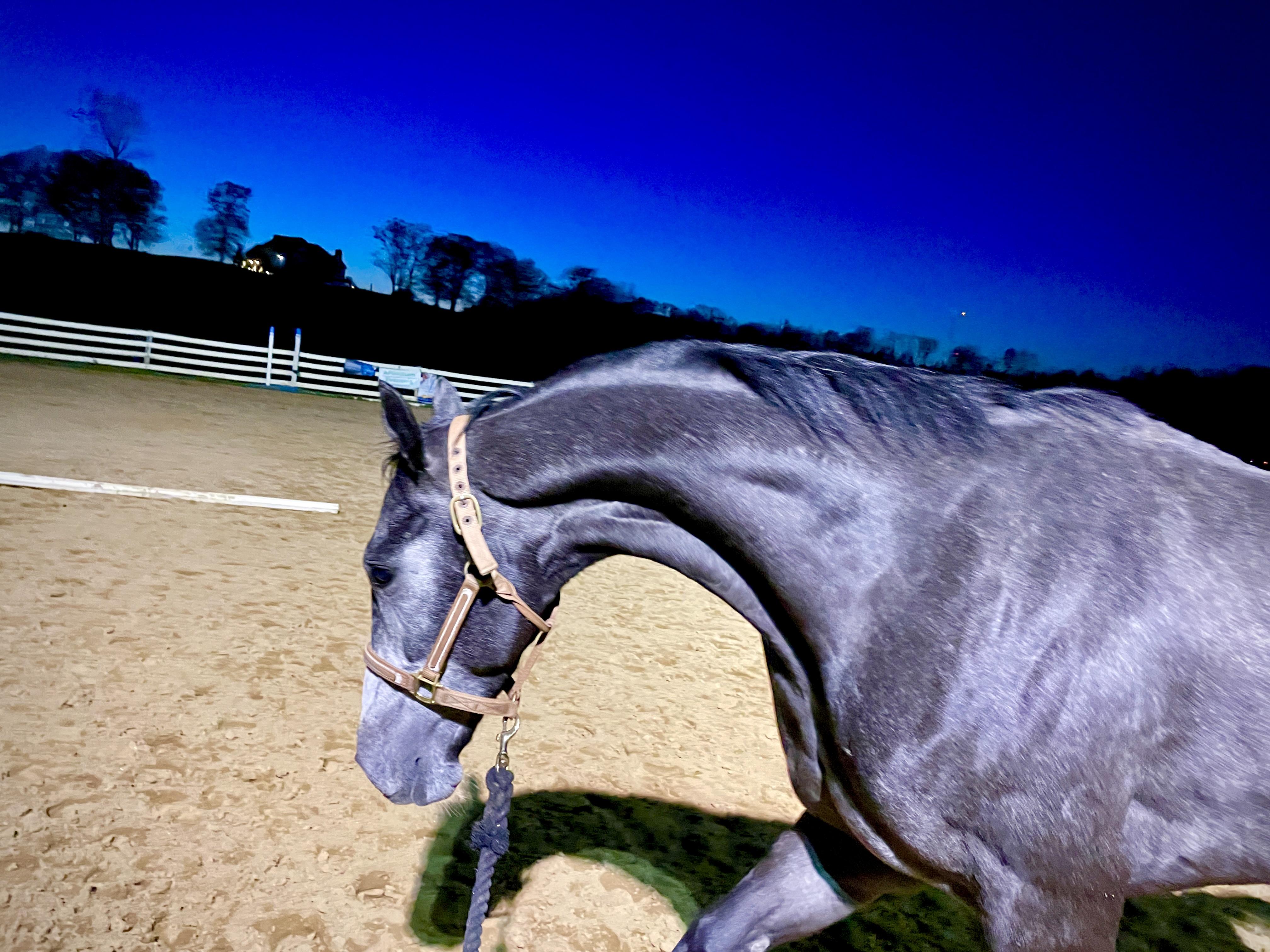 Tuck heads to his brief PM turnout in the arena. Photo by author.

When he got to mine, I was in a pickle – I was coaching at a show and wasn’t home until after dark. He still deserved to stretch his legs, but chucking him out in a foreign paddock at night didn’t exactly seem super smart. Sure, some horses, especially if they have had regular turnout previously, can immediately go out and stay out without an issue (though I prefer them to actually be able to see their fencing and terrain by daylight first). Others, like Tuck, struggle with re-learning “how to horse.” I remember thinking with Forrest, how hard can turnout be? But he had a timer, and when it went off, he would run… and run… and run… and good lord, someone please bring him in.

So, while my team rocked around Chatt Hills, and I then ran to Kentucky to grab the other geldings, Tuck hung out in his new stall and got to experience an hour of turnout here, another hour there. By Sunday, I finally was able to give him some real turnout and introduce him to his new herd. The fun part of this has been watching him learn how to horse. Cheese Whiz was happy to help. He has (re)taught him to co-groom, whacked him with feed pans until he got him to play, and showed him the best spots to snack. 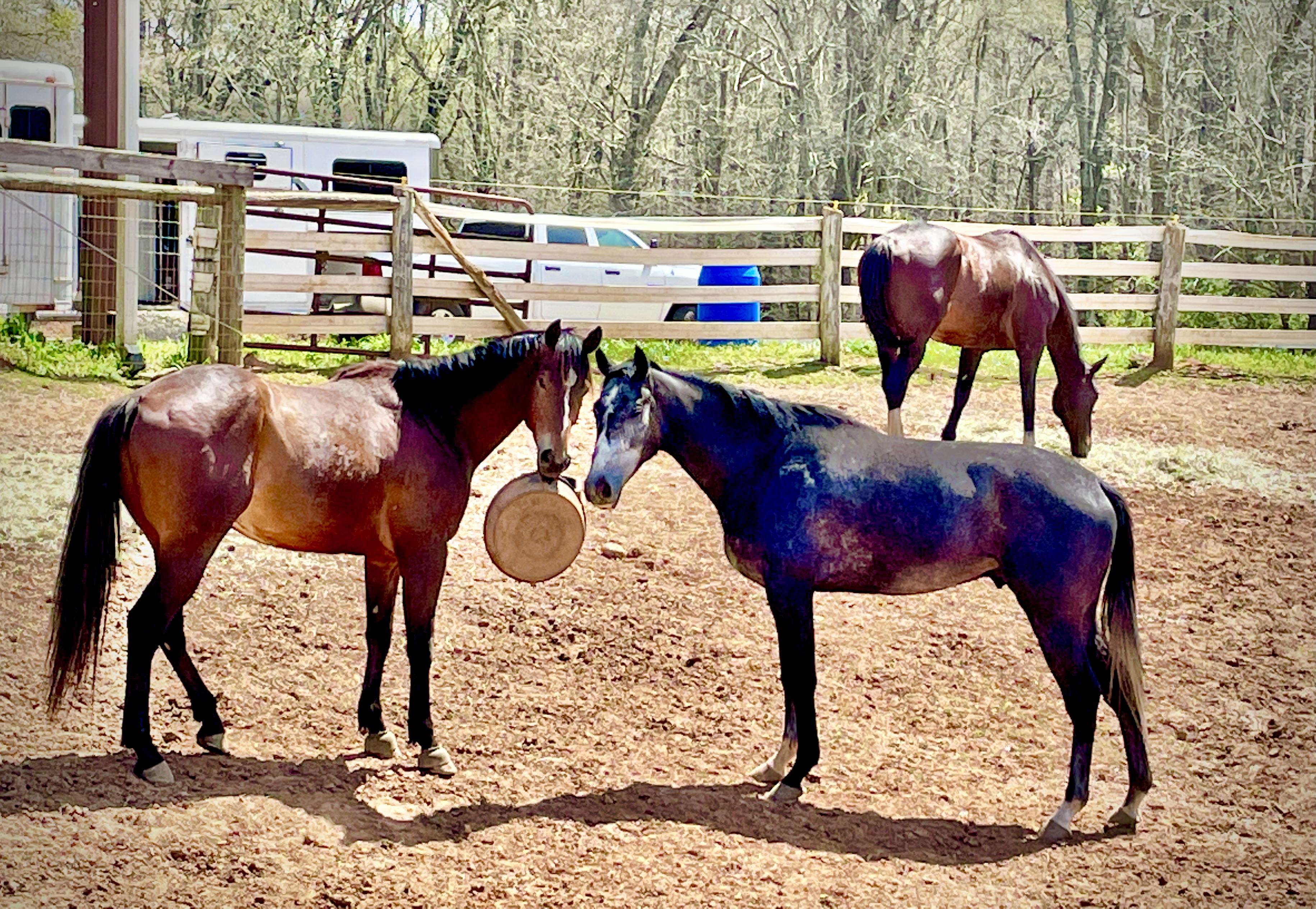 Cheese teaches Tuck to horse, while Ranger (the current alpha) ignores them in the background. Photo by author.

I am lucky with my setup here as I have two important things: small paddocks (to help the transition to the big field) and solidly quiet alpha horses. Those calm ones who radiate leadership without punting the newby into the next field (unless they really deserve it) are worth their weight in gold. Introductions into the herd start with them, and then I will slowly add the other members. This generally offers the new guy both friends and a notion of where they sit in the herd hierarchy. Tossing them straight out into the pack makes for interesting studies in equine pecking orders, but also tends to produce more wounds to doctor later.

Tuck initially hoovered his food (which we provided in limited quantity to transition him onto our diet), but the more tired he became from his turnout, the less he would eat. Over the last two weeks, we have had to improvise with his feed to keep him comfortable and keep the calories coming in. Slowly we have moved him from his introduction to soaked beet pulp and alfalfa cubes with topper feed and my supplements, to just wet grain, back to soaked alfalfa cubes and grain. The goal is to keep him eating and avoid colic while building to my usual feed regimen (if he can/will eat it). So far, so good; sometimes progress is far from a straight line. 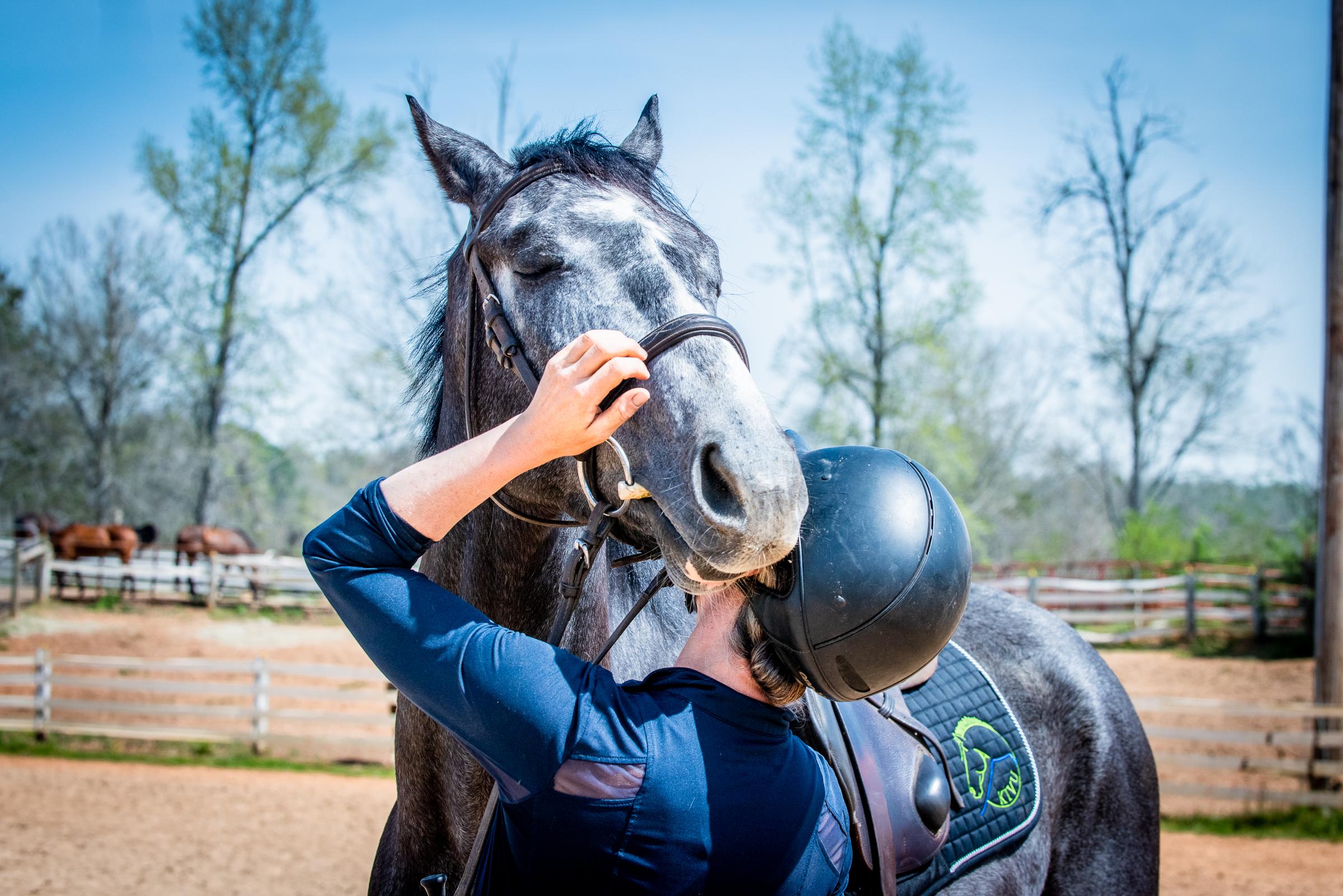 Tuck is starting to figure this whole post-track thing out. Photo by Kelly Robison

The other two new kids, “Beans” (Giant’s Gateway) and “Aspen” (Aspenfiveoneseven) have been a completely different process. Both had already had a bit of post-track let-down and turnout at their race farm, Winchester Place Thoroughbreds. Beans had been there for a few weeks and was still track fit and tight. Aspen had been in turnout for a few (maybe too many) months and was fluffy in all the ways from weathering a winter on the Kentucky bluegrass. Both had no problem hopping right into turnout here, though. 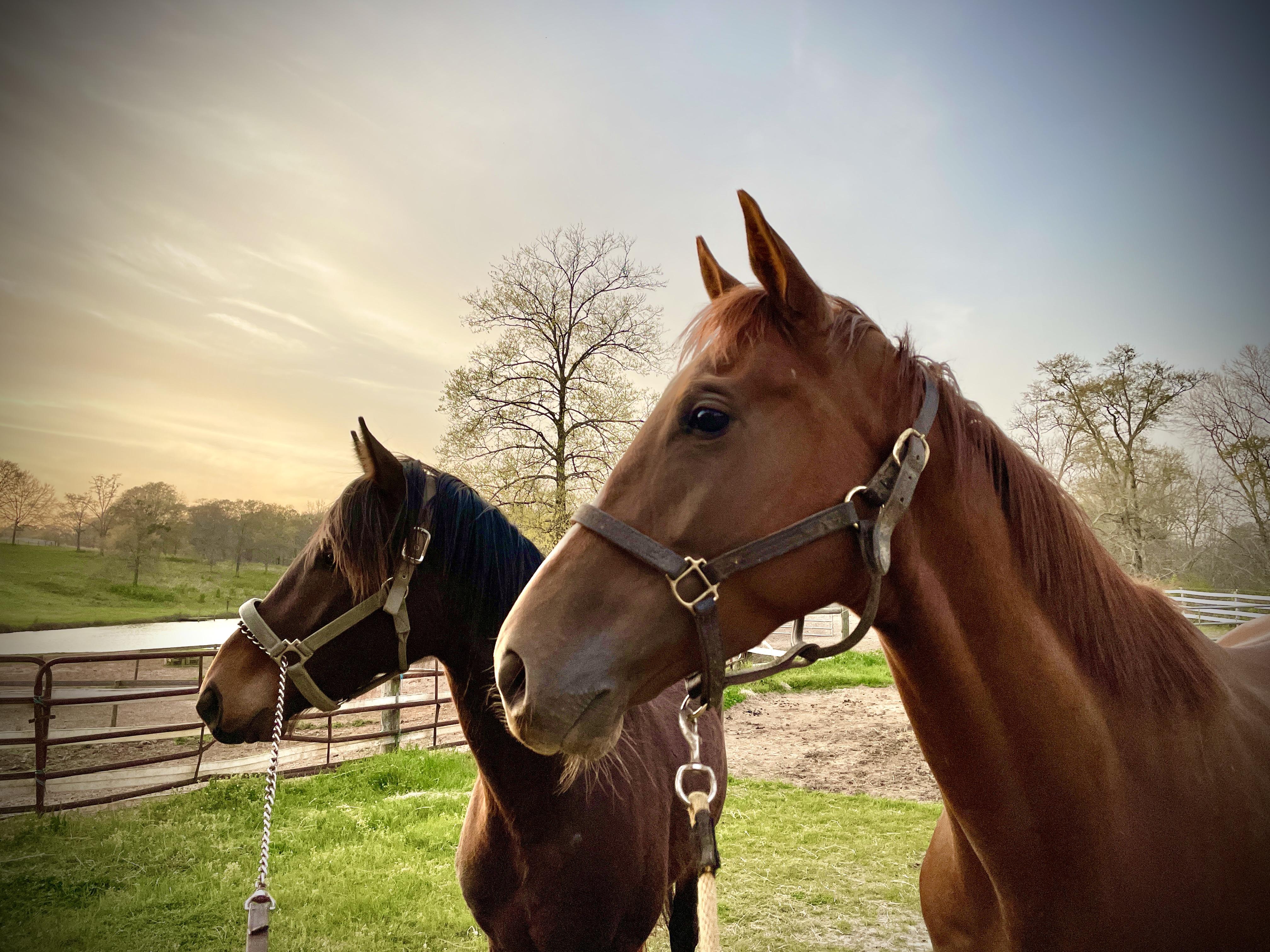 Beans (Giant’s Gateway – on the right) and Aspen (Aspenfiveoneseven – on the left), coming in from turnout. Photo by author.

Each, however, came in with their own quirks and issues. Beans had clipped his heel in that Kentucky turnout and was brewing a hell of a huge abscess. While Tuck has been defensive in his stall and interaction has been mediated with a halter, Beans would lay his head in your lap, temporarily impeding anything but loving on him while trying to soak his foot. Beans has been easy, abscess treatment and all: He leads well, loves humans, drinks great and is willing to eat absolutely any hay or grain you put in front of him. His once-ribby self is now putting on the pounds and getting ready to transition back into work. 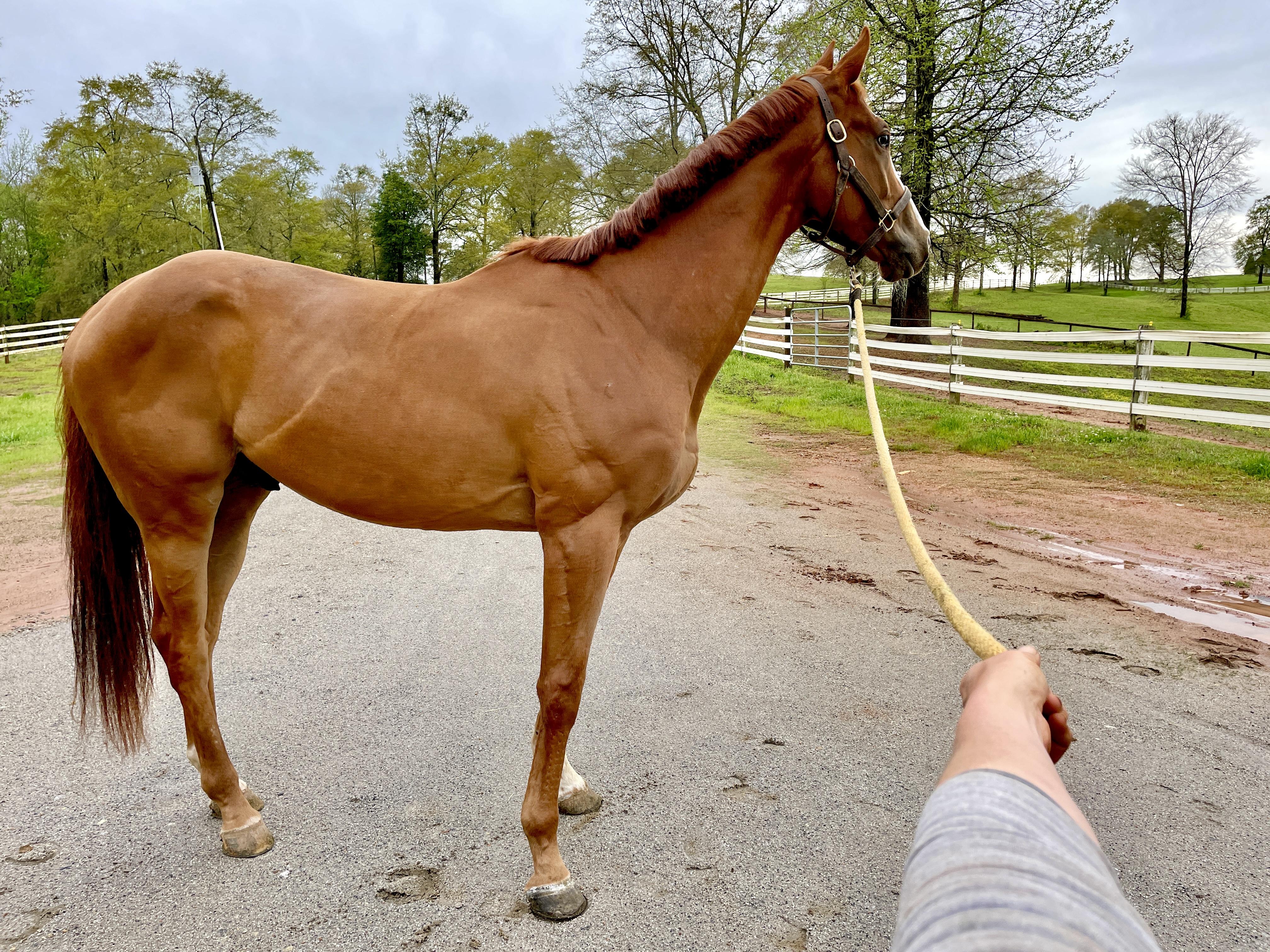 Perhaps not the most flattering photo of Beans (Giant’s Gateway), but it’ll work as a good marker for progress. Photo by author.

Aspen on the other hand, has been a comical process of re-acculturating a pocket-sized dragon to farm life. While he was track broke, he had since reverted to a semi-feral state. Standing maybe 14.3-hands, this Thoroughbred pony is the smallest thing that has been in my barn for ages, but he is also the biggest (and most ridiculously cute) punk.

When Aspen arrived here, he took a look around and decisively said “nope.” He refused to exit the trailer; He initiated a hunger strike;. He sulked in his stall; He refused to be caught in turnout; He thought all of our ideas were dumb. No one ever said size and ease of training correlated. Fortunately, a week in, he is coming around well and his hunger strike has been broken (by unlimited flakes of alfalfa and the introduction of soaked alfalfa cubes with incrementally increasing levels of grain). 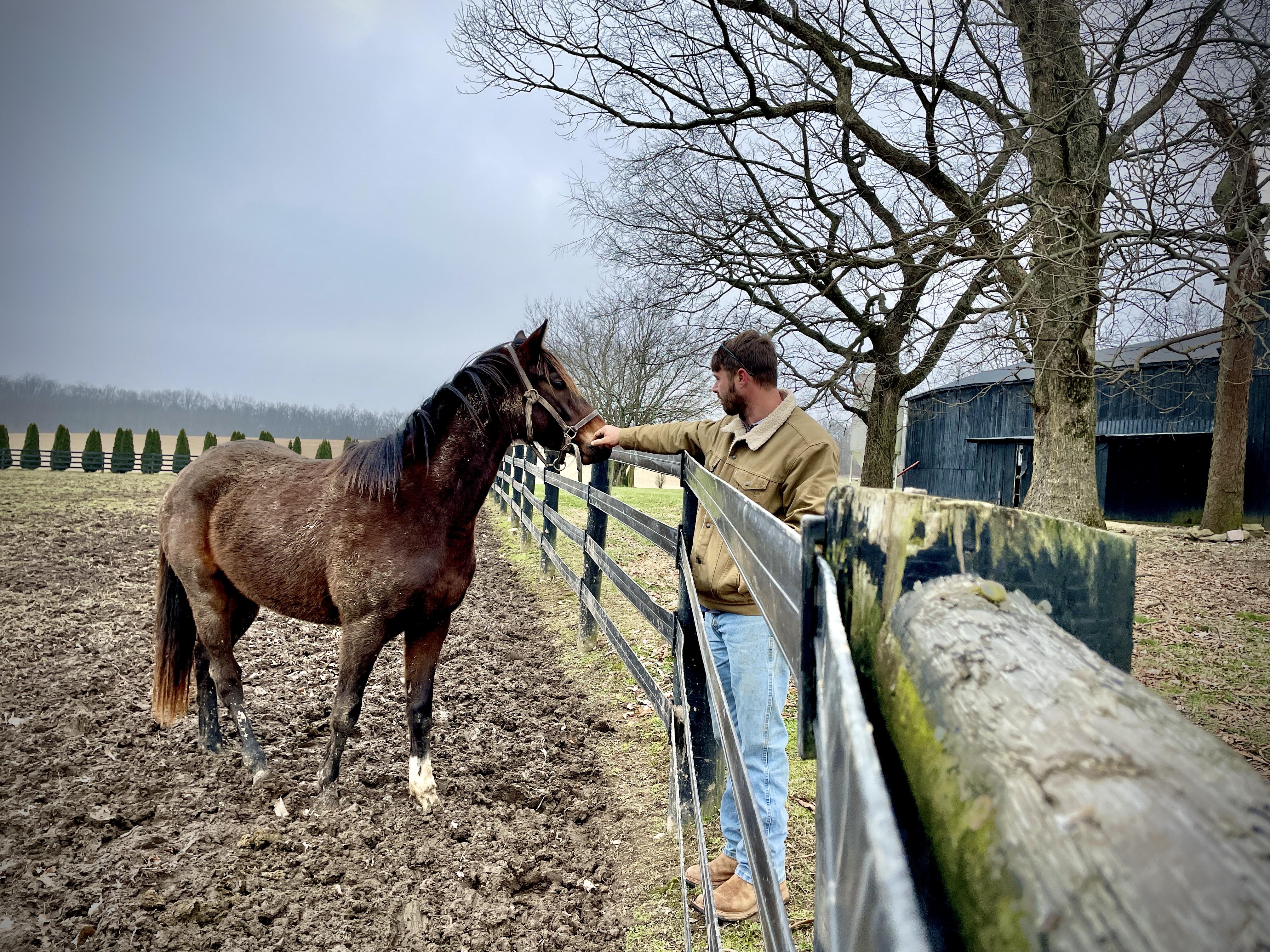 Aspen and Shane at Winchester when we first met the pint sized Thoroughbred back in January. Photo by author.

So overall, in the last two weeks, between Tuck, Beans and Aspen, everyone at my farm is getting a solid education in bringing horses from the track to the sporthorse world. While the challenges they have posed are relatively average in my experience, they nonetheless provide enough urgency and diversity to keep us on our toes. They also remind me to break it back down to the very basics in these first weeks and focus on getting the essentials – food, water, and turnout – right before expecting anything more of them. So now that we’ve ironed out most of those quirks and broken the hunger strikes, I get to head towards the exciting process of ground training and then under-saddle work. Not going to lie, I cannot wait to get the pint-sized punk in tack.