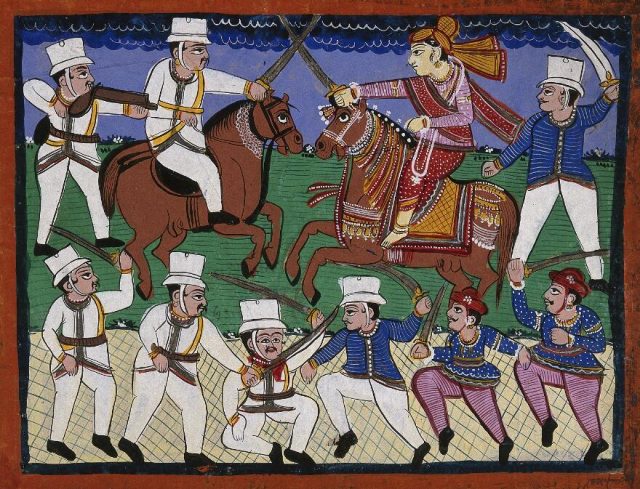 This week’s equine girl boss is Rani of Jhansi, who is described as India’s Joan of Arc and one of the greatest freedom fighters of India. Learn more about this equestrian warrior.

Described as one of the “greatest freedom fighters of India” and “India’s Joan of Arc,” Rani Laxmi Bai trained and led her own army during the Indian Rebellion of 1857-1858. 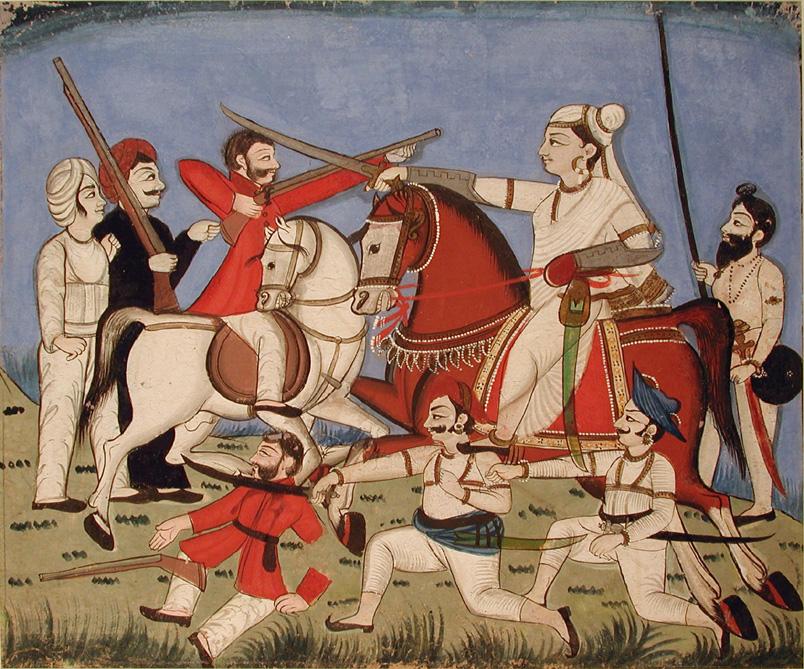 Rani Of Jhansi Vs. British Troops, 1860, SanDiego Museum of Art.

1. She learned to ride as a child.

After the death of her mother, her father provided her with a non-traditional education. Peshwa Baji Rao II — her father’s employer and the equivalent of a modern-day Prime Minister — and his son, Shrimant, also favored Laxmi Bai.

Godse notes they were “playmates” and due to the fact that she had “no woman to look after her,” she spent most of her time with him. As a consequence she learned “to read and write Mararthi and Modi, took up archery, horse-riding, sword play, handling a gun and other firearms.”

2. She began and ended every day on a horse.

Laxmi Bai married the Maharajah of Jhansi in 1842 and came to power after his death in 1853. As queen, her day began as early as three in the morning.

Godse writes, “… she then went out riding, when she would do high jumps over hedges, jumps over trenches, suddenly stop the horse and make it sit, and do many other feats of equitations. Sometimes she would ride an elephant.”

All that before breakfast, after which she tended to matters of state and visited the temple in the evenings. Unlike other women of the time who traveled by palanquin — a large box carried on two horizontal poles — she often explored Jhansi on horseback, accompanied only by the Vilayati cavalry.

She eventually trained other women to fight and ride as well, raising a volunteer army of 14,000 men and women to defend against the British Raj. 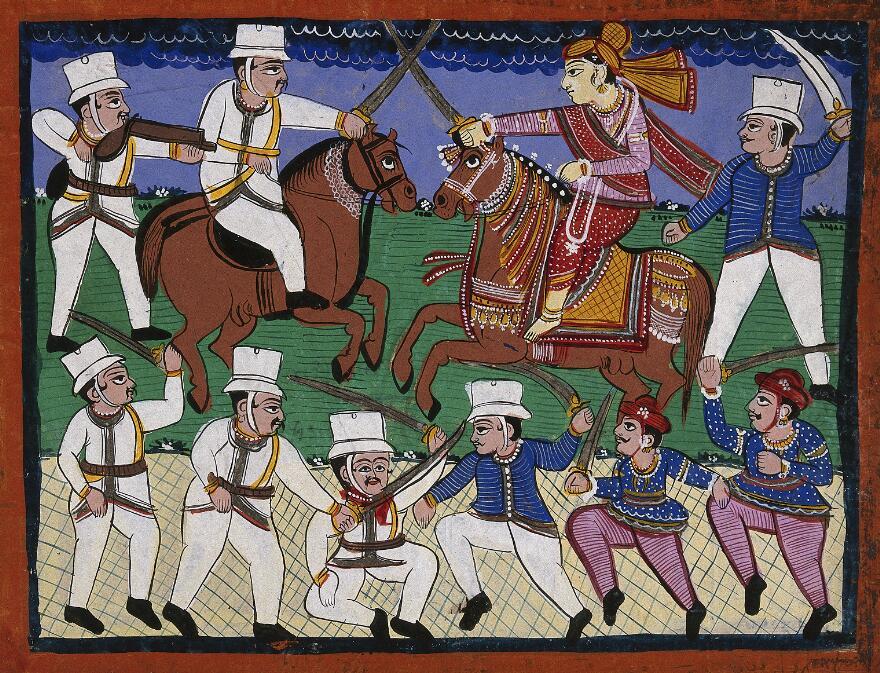 The battle of Gwalior: the Rani of Jhansi leads her troops. Gouache drawing, 186-, Welcome Collection.

3. She wasn’t afraid to call out a horse trader.

Godse recants this story: “One day a dealer brought two horses for sale. [She] rode them and made them do some exercise and declared that one was worth a thousand rupees and the other fifty though he looked a fine animal. The dealer was struck with admiration and confessed to defect in the other horse and stated that with good fodder and feed he had improved its looks and till now nobody had detected its drawbacks.” 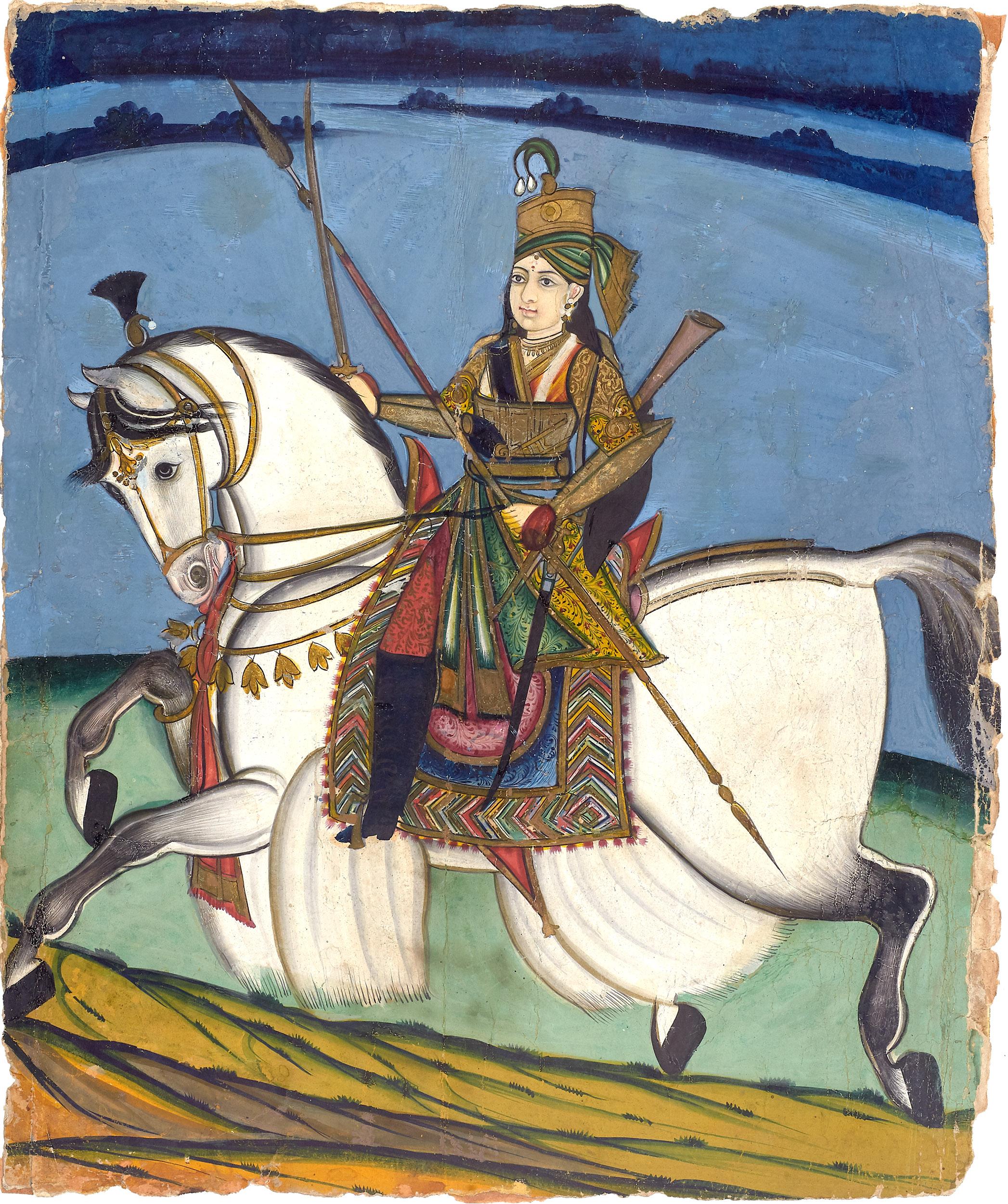 4. Her most famous horses are legends in their own right.

Sarangi, Pavan and Baadal were beloved by their queen. Almost nothing is recorded of their breeding or training, but historians assume they were Marwari, an ancient breed native to India known for its trademark inward-curving ears.

As early as the 12th century, the Marwari breed was known for its bravery and courage in battle. One folk tale says “The Marwari would fight with its owner to the death on the battlefield, only leaving to save an injured rider.”

There are multiple accounts of Baadal saving Laxmi Bai and her adopted son when the British laid waste to the Fort of Jhansi in March 1858.

Godse writes, “[Laxmi Bai] herself rode a white horse. She wore male attire, riding shoes and armour covering her whole body. She did not carry even a paisa coin on herself. With a resounding ‘Jai Shankar’ war cry, she descended from the fort and, crossing the city, went out through the north gate.”

Carrying two riders, the horse made the almost 100-mile journey from the fort to a neighboring town, Kalpi, in a single day. Baadal, unfortunately, died after the trip from a broken leg, an injury that may have happened during the escape. Legend states he jumped over a six-foot-high, three-foot-thick wall on a slope of 135 degrees.

Author’s Note: All India Roundup described this myth as “rubbish.” The closest I could imagine to that level of jump would be the infamous Hickstead Derby Bank, though that slope was only 60 degrees at its most dangerous.

5. She died leading the charge.

Two months after fleeing the fort of Jhansi, Laxmi Bai rode out to confront the British army for the final time. The History of the Indian Mutiny (1890) states she led the charge “clad in the attire of a man and mounted on horseback.”

Her death, though, is shrouded in mystery and legend. Some accounts say she was stabbed with a saber. Others argue she was shot. Many say she died instantly, while a few tell the story of an injured queen rescued from the battlefield only to give her jewels to her subordinates before dying in the arms of a childhood friend.

A British Commanding Officer later wrote, “The Ranee was remarkable for her bravery, cleverness and perseverance; her generosity to her subordinates was unbounded. These qualities, combined with her rank, rendered her the most dangerous of the rebel leaders.”

New York Times reports, “… almost a century after her death, the Indian National Army formed an all-female unit that aided the country in its battle for independence in the 1940s. It was called the Rani of Jhansi regiment.” 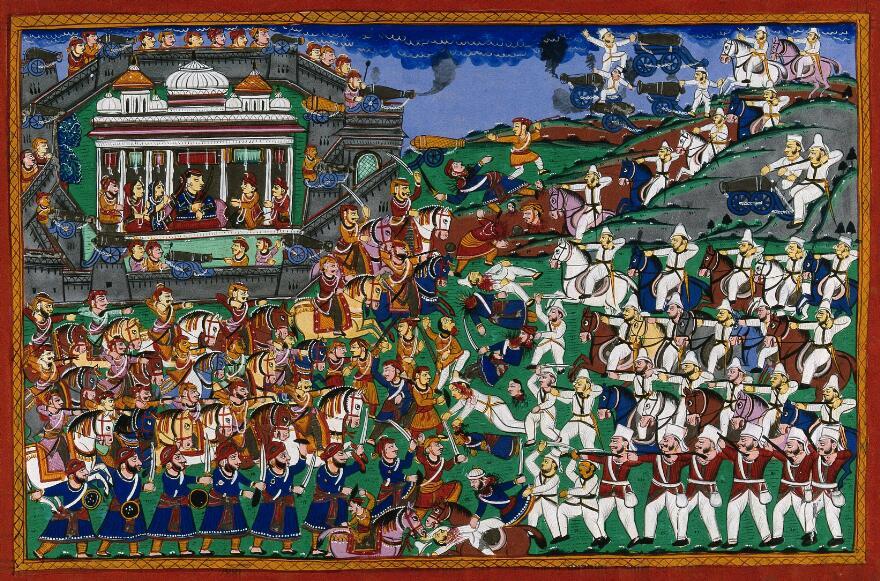 The Rani of Jhansi. Gouache painting by an Indian artist, 18–, Welcome Collection.

“The Legend of the Marwari Horse,” www.naturalhorsemanshipindia.com.

“Rani Laxmi Bai of Jhansi, Myths and Facts Regarding Her History,” 2016, www.allindiaroundup.com.

The History of the Indian Mutiny, Kaye and Malleson, 1890.