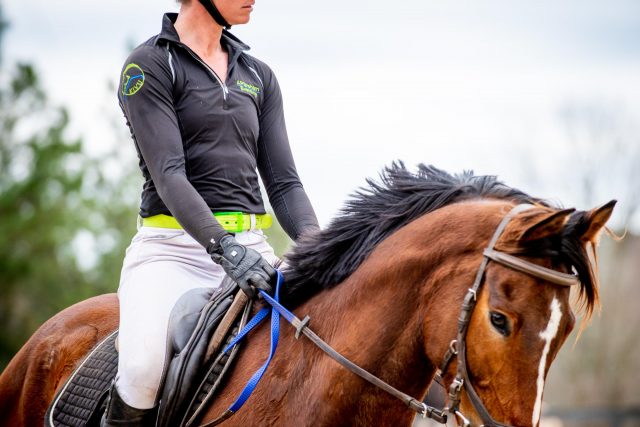 “Just like his transitions, progress is incremental. We might take a few steps back before we go forward, but if communication stays clear, slowly but surely, accuracy will take the place of anxiety.”

Welcome to the next installment of Thoroughbred Logic. In this weekly series, Anthropologist and trainer Aubrey Graham, of Kivu Sport Horses, will offer insight and training experience when it comes to working with Thoroughbreds (although much will apply to all breeds). Come along for the ride as she discusses more logic on riding the nervous horse.

Last week addressed one portion of riding the nervous horse – keeping the rider calm, quiet, and in proper equitation despite impending explosions (read the full article here). That in and of itself should get a lot of people and horses through at least part of their nerves. However, some situations (and horses) take a bit more than just a proverbial human sedative and a “I give no shits and just keep riding well” attitude.

The shits one does give need to be clearly communicated.

Thoroughbreds are generally sensitive rides, and probably everyone reading this already knows that all too well. That sensitivity can either be harnessed for athletic quickness and catty accuracy, or it can go spiraling out of hand to the “hot”/nervous side of things. One of the key components that makes the difference as to whether you as a rider gets accuracy or anxiety is how clearly they communicate. (And yes, this probably applies to humans too…) 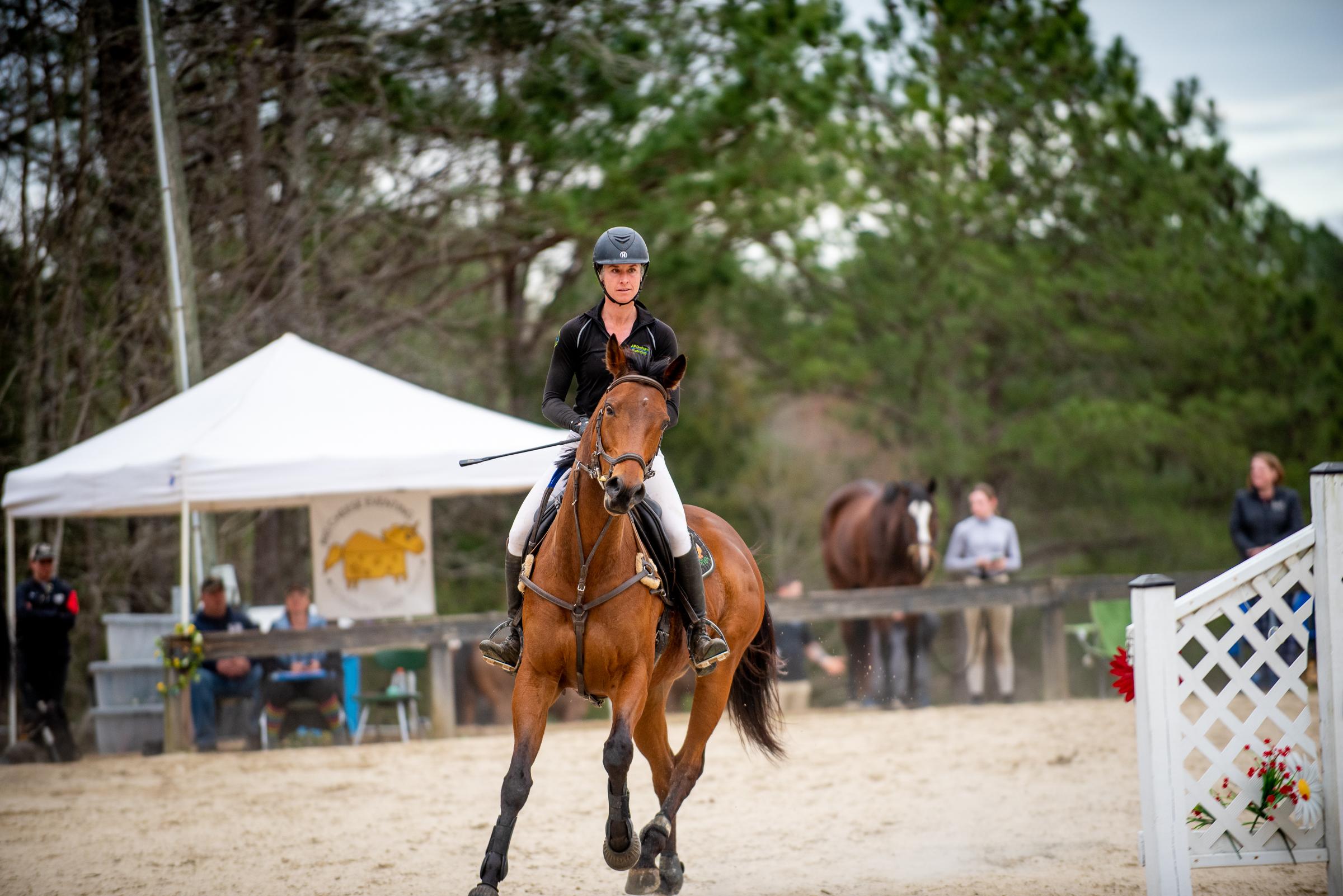 Rhodie (Western Ridge) threatening to give in to his nerves and “dragon” at a recent show. Photo by Cora Williamson.

A) Breaking your requests down to One. Thing. At. A. Time.

B) Setting expectations and praising all efforts in that direction.

The anxiety-prone “up-transition” makes a good example. There, waiting to go up a gait or two, a nervous horse might jig in place, threaten to go sideways or rear, or try to rush through the bridle until they are allowed to go forward. One of the best things to do in that case is check communication, and if possible, slow the whole process down. That said, if taking a breath and decelerating is not possible, just go forward and see next week’s article about moving their feet. 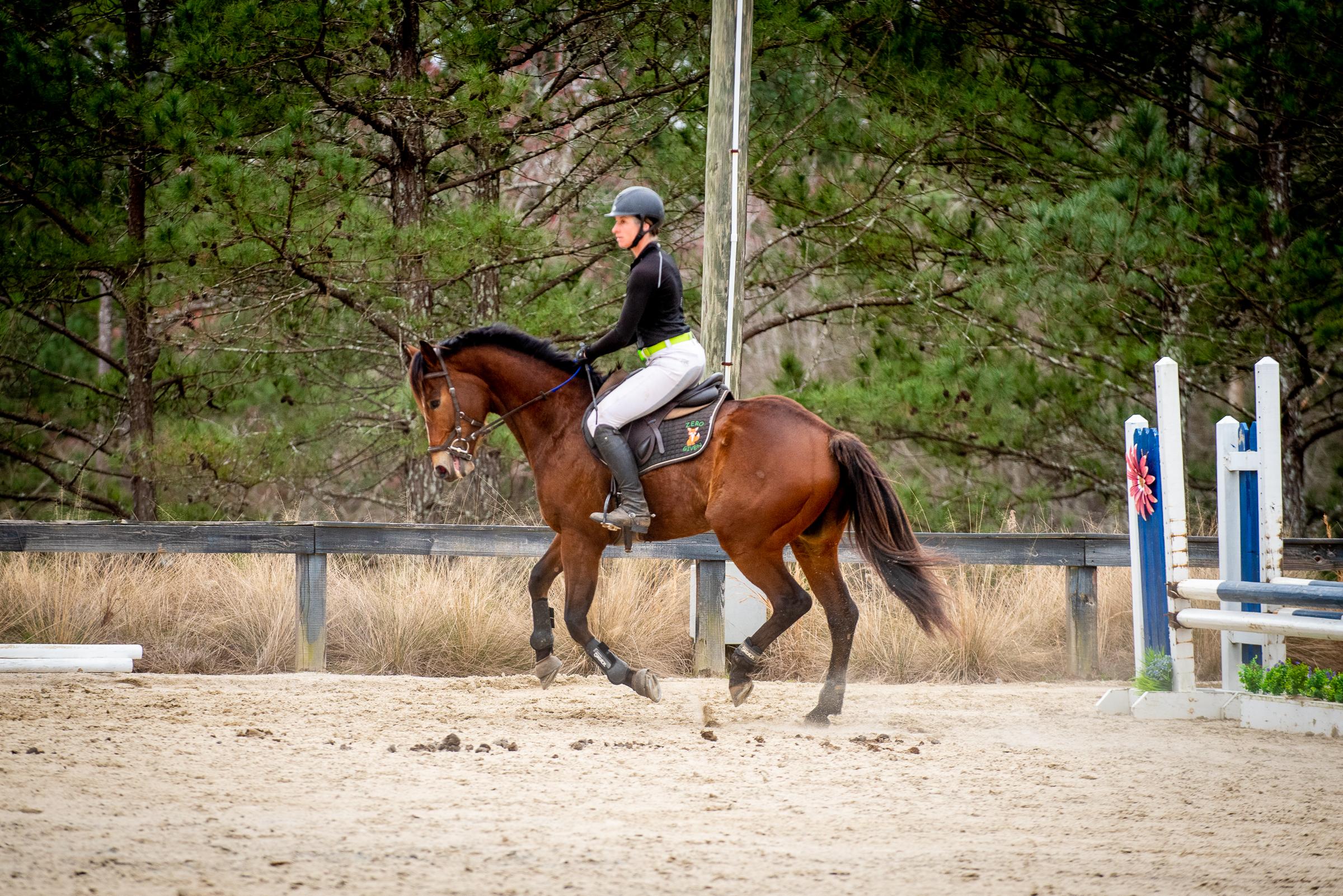 In theory, to simplify the communication, a rider has to do less, not more. Relax and become bungee-er, soften all aids, focus on the horse’s footfalls to start. With a hot/nervous horse, ignoring things will become a key skill: Ignore where the horse holds its head, ignore undesirable behavior (unless dangerous, of course), ignore the potentially odd shape they make with their body. One thing at a time. Do you have a rhythm? Got one – good. Now, move the ribs over. Good. Now soften them over their back. Good. Now, canter. Good.

And if they get it right and lope off into the perfect balanced canter, fabulous! If not, also excellent — there is a moment to praise the try, even if it wasn’t perfect, and do more training. The potential benefits here are enormous — riders get to check in with what aids they are actually using and rethink the basics, and horses gain a clearer understanding of the job at hand as well as confidence and a desire to try hard(er). By breaking complex movements down to their component parts, slowly (maybe in minutes, but also, maybe in months) anxiety will move along the sliding scale towards accuracy. 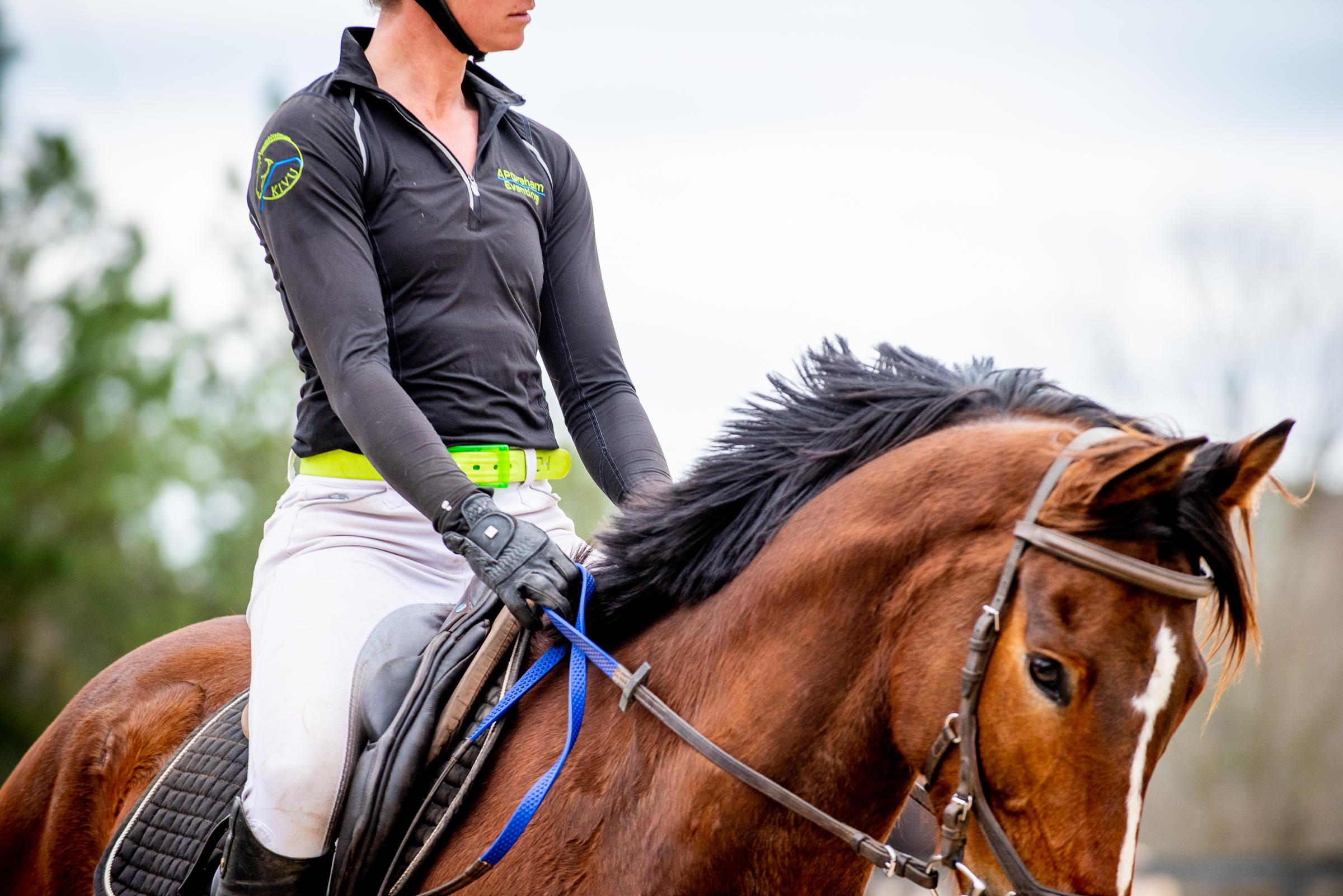 Slowing down and making my aids bungee to keep Cheese inside the arena (he succeeded, but only just). Photo by Cora Williamson

Six-year-old Cheese Whiz (JC: RW’s Retirement) is an excellent example for all of this. Cheese came here from rehab at his owner’s after a short race career and a stint in a Texas kill pen. When he arrived, he was a proverbial hot mess with a serious head-banging problem. We addressed teeth, tack fit, and went down all the usual avenues to ensure it was not a pain issue. Then we began addressing the behavior — largely by ignoring it.

So, for the last six months, Cheese has been learning to respond to clearly communicated asks. I generally don’t care if he’s covering too much ground or if his head is threatening to break my nose. Cheese and I have earned plenty of “if you say so” looks from my students and friends as we pinball around the arena to the sound of “good boy.” As such, our ability to get a canter has gone from a full-arena-lap scramble, to a way-too-fast semi-gallop, to one or two steps and into then correct rhythm canter. It has gotten there slowly, through almost imperceptible bits of try and progress. In short, there has been a lot of “keep it simple, stupid” to me, and “good kid” to him. 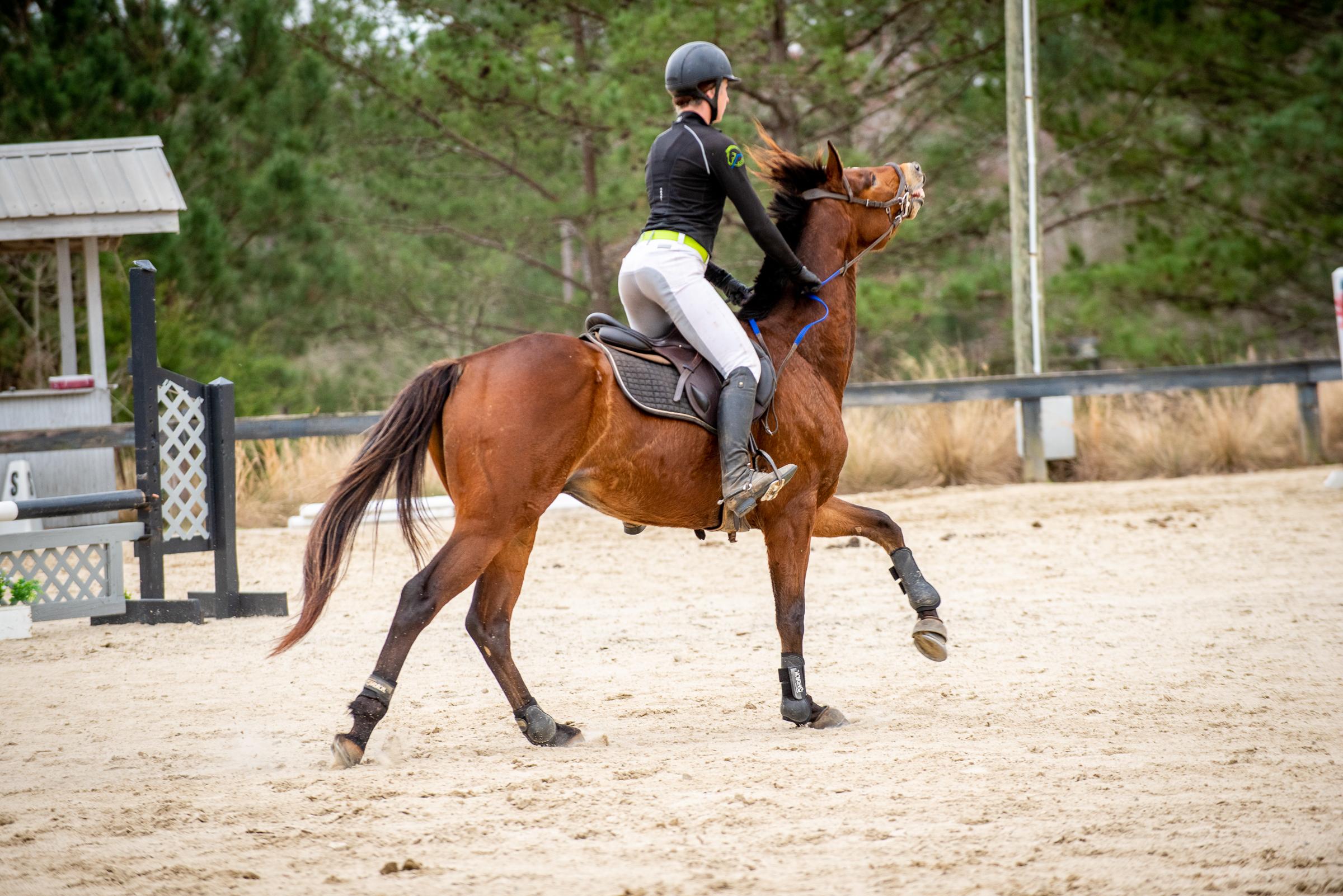 The head-bang isn’t entirely gone, but thankfully, its frequency is hugely reduced. Photo by Cora Williamson

Part of all of this clear communication mumbo jumbo is also about setting expectations and upholding boundaries. As with bipeds, when such parameters are known, everyone is able to play better together. So, with the nervous horses, I aim to set easily attainable expectations, but also keep my boundaries (where I will offer corrections) pretty firm.

No, you cannot run away from me on the lead. No, you cannot bolt sideways into other horses in the warmup. No, you cannot go so fast that we are going to fall down in a turn. No, you cannot rear when I ask you to walk. And no, you cannot ignore a down transition and think the better option is to jump out of the arena. The ‘no-s’ are consistent and often safety oriented. The expectations are equally stable, but the bar is set low. When combined, equine frustration, confusion and anxiety has a chance to be minimized.

Here’s a good thing though — if you’re not clear, there’s a solid chance your horse will let you know. Cheese will tell me if I am frustrating him, if I ask too much at once, or simply, if he is confused. He will ball up, run sideways, head-bang and go back to all his usual defenses. Most of the sensitive horses I know (and, well… my whole barn full of Thoroughbreds) will do similarly. Many become more “up” and explosive. That said, responses do vary; we have one who will completely shut down and lock all four feet (ahem, Chille), and one who gets angry and will aim to run you through objects, the arena rail, jump standards etc. in order to prove his point (here’s looking at you, Rhodie). 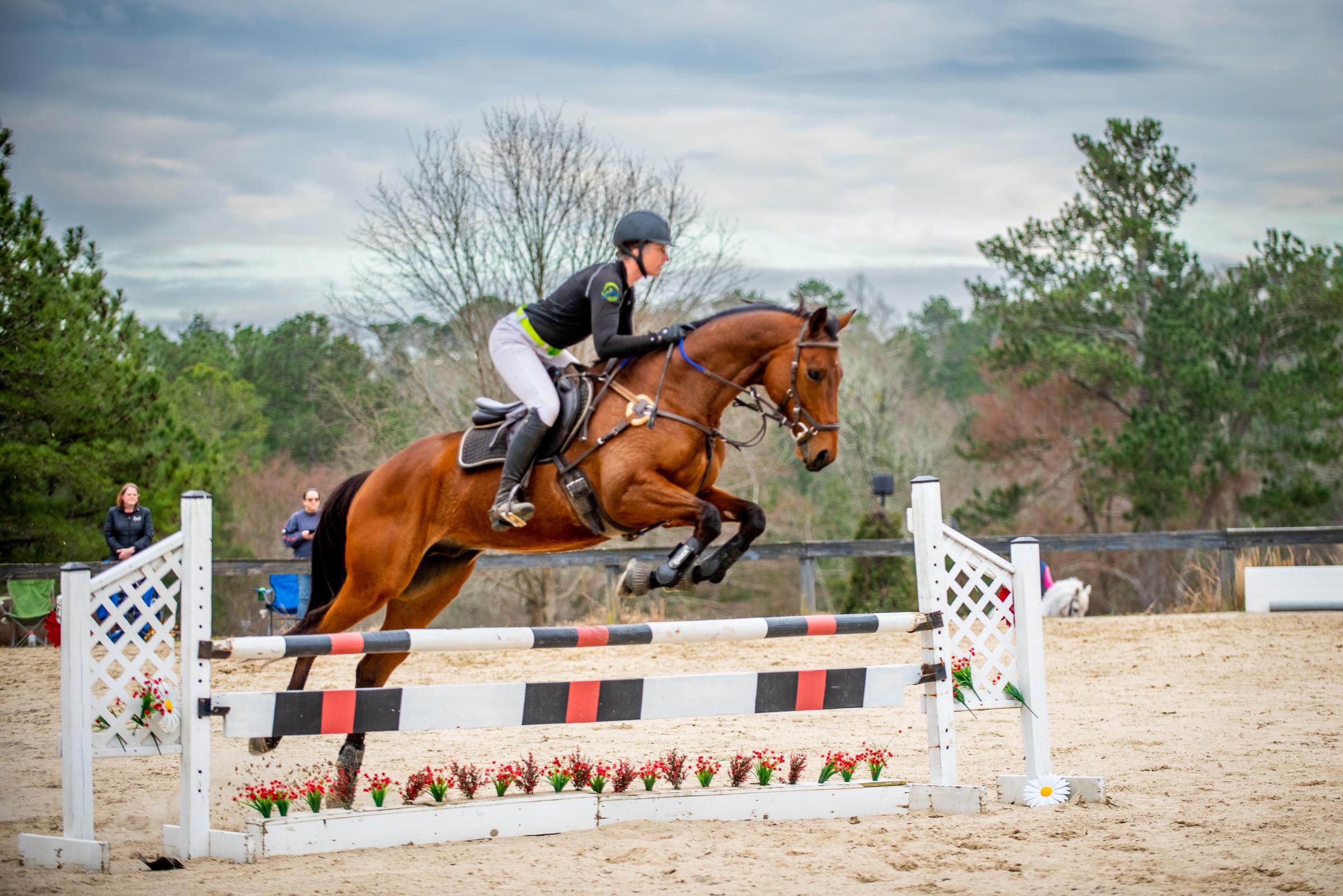 Good thing is that when Rhodie’s anxiety is channeled into accuracy, he’s damn talented. Photo by Cora Williamson

Cheese had a good shot at testing all of these theories last weekend. On Saturday, we traveled to the Big Cheese Eventing Jumper show at Ashland Farm and jumped around the 2’6.” My expectations were that we would survive the warm-up ring and then head into the jump arena to see what he thought of the fences. Transitions would have to be clear. That was a boundary I set ahead of time – no running through turns on the wrong lead. Cheese does not have his changes yet, and letting him go off balance to fences wasn’t going to fly. While he nearly jumped out of the arena once, the rest of the time, he listened, balanced up, trotted his change and kept an even canter to the fences. 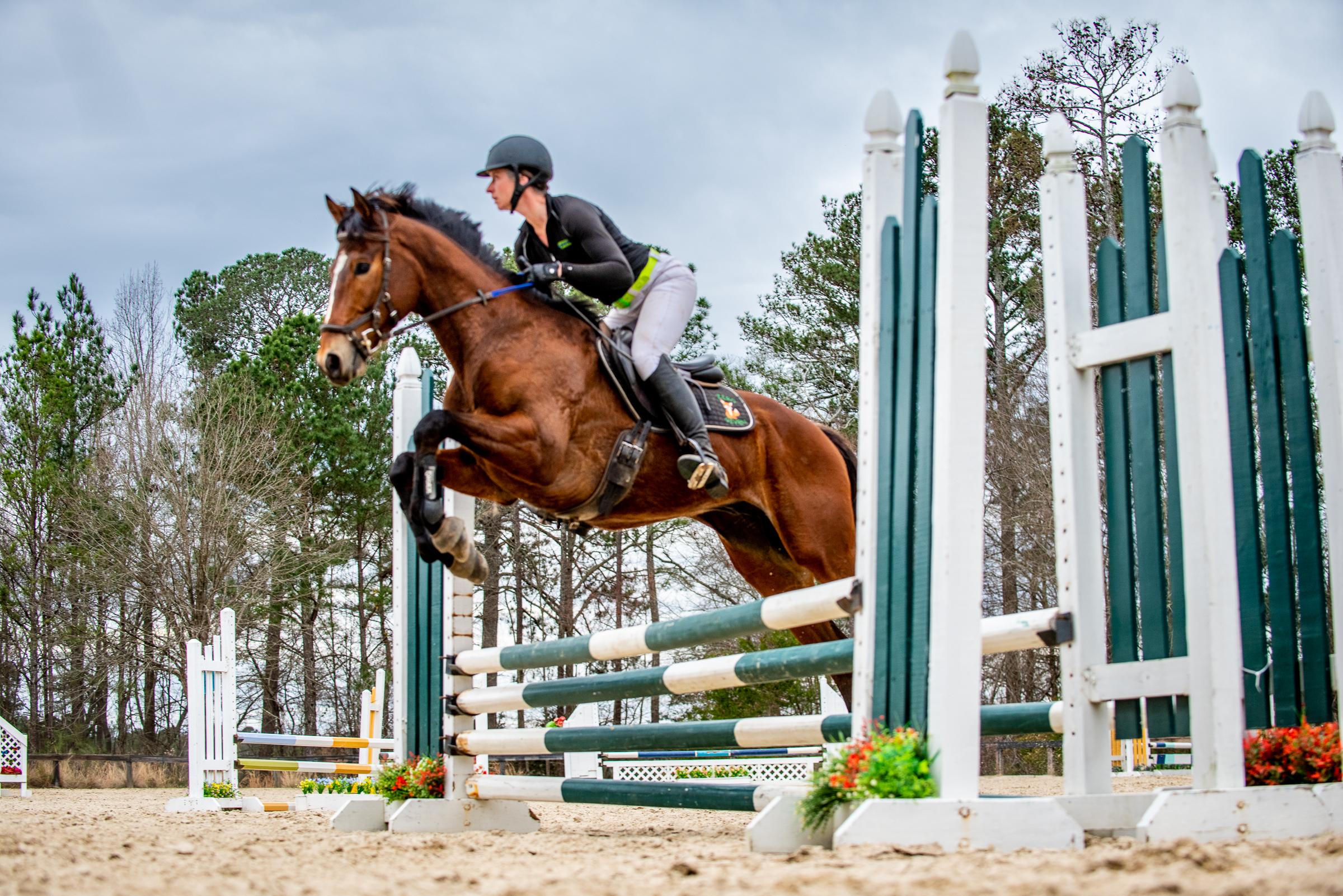 He did what he was asked and blatantly exceeded expectations. So when Cheese walked out of the ring and refused to stand quietly to wait for his next round, I accommodated. I hopped off, loosened his girth and waited until we were on deck to get back on. Fighting with him to stand when he had met my bar for the day would have not only been counter-productive to the goal of being quiet in the arena, and distracting for his already over-loaded brain, but also it would have been unfair. I don’t get to raise the bar just because it would have been momentarily convenient. 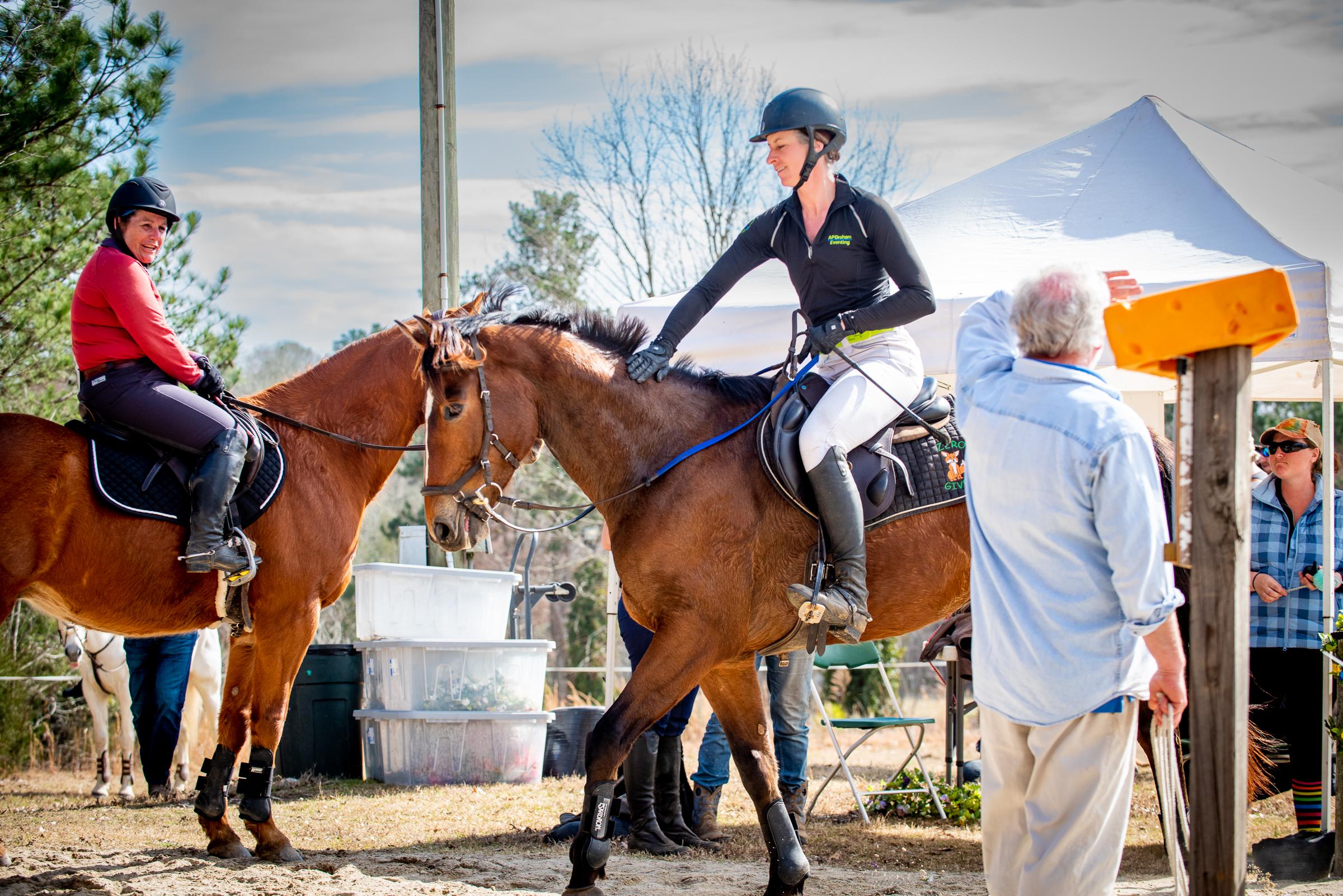 Cheese managed to walk out of the arena quietly, but standing was done in hand. Photo also captures his owner, Lois Lassiter on her horse, Boomer. Photo by Cora Williamson.

Next show, I might raise the bar — ask for good warm up arena etiquette, quiet rides to fences, and one minute of walk and hang out before hopping off in between classes. But that is the next show. This one was a success even with a few moments of head flipping and without the ability to quietly hang out in the saddle.

Just like his transitions, progress is incremental. We might take a few steps back before we go forward, but if communication stays clear, slowly but surely, accuracy will take the place of anxiety. And I’ll tell you what — when it does, Cheese is going to be one hell of athlete.

Check back next week for part three of the “Riding the Nervous Horse” portion of Thoroughbred Logic, where I’ll address moving their feet to settle their brain.