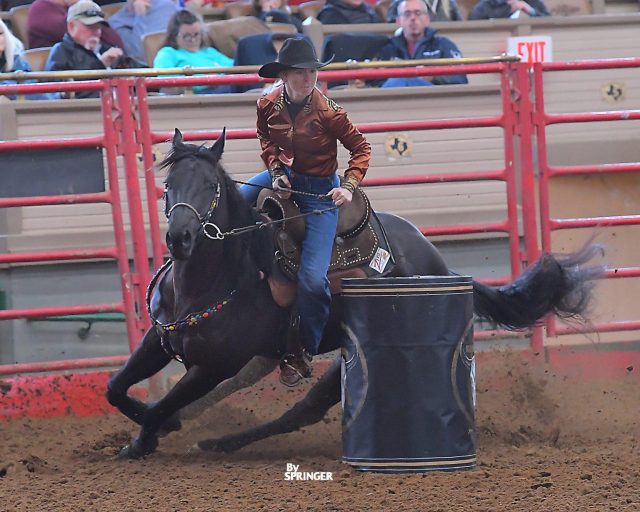 American Rodeo Barrel Racing Semi Finals Slack and Buyback Rounds concluded on Saturday. Brittany Dallaire and her young horse Heavenly Harvey came out on top. Thirty-four riders will be advancing to the rodeo performances next week.

The American Rodeo Barrel Racing Semi Finals Slack took place on Friday, February 25th. After 294 runs, Brittany Dallaire and her horse Heavenly Harvey topped the leaderboard. “Harvey” is a four-year-old Oklahoma-bred gelding by JL Dash Ta Heaven and out of Ima Cash Dancer, by Cash Not Credit. Harvey’s performance at the historic Cowtown Coliseum was especially extraordinary considering that he has made less than 20 competitive runs in his entire life. Brittany says that her goal was to have a smooth, clean run and place in the Top 30, but Harvey wanted to go fast! He absolutely blew away the competition with a 13.464-second run. Brittany and Harvey earned $23,870 for their win.

The Top 30 competitors from the Semi Finals Slack all won checks totaling over $130,000. Following Brittany and Harvey’s fast time, the top ten included Bryana Lehmann and VF Wishbone Red, Tasha Welsh and Seis Smashin Fame, London Gorham and Cashin Chicks, Cayla Small and Slick N Black, Taylor Hanson and French Kiss To Vegas, Kassie Mowry and Epic Guy, Janna Brown and Jets Top Gun, Sarah Rose Waguespack and Roses Roan Ranger and Fonda Melby and RF Back For The Cash. Rounding out the Top 30 was Lisa Thornton and Straight Toasted with a 13.861-second run. All competitors in the Top 30 will advance to the rodeo performances this upcoming week.

The American Qualifier Rodeo Performances begin on Tuesday, March 1st at 7:00PM CST. You can tun into Ridepass to watch these horses and riders compete for a chance to win the $1 million bonus at The American Rodeo.