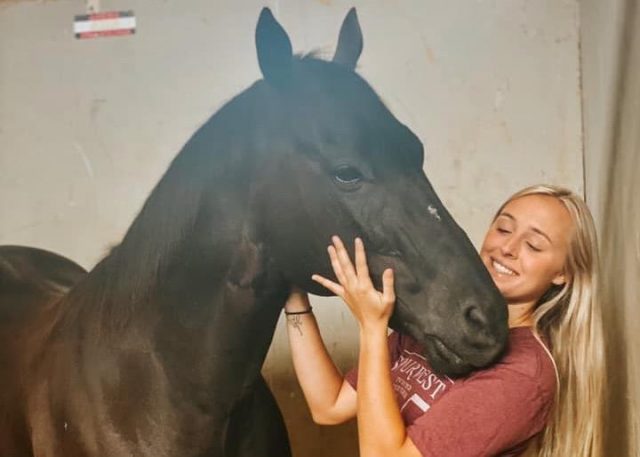 February 22, 2022Katelin ParsonsKatelin Parsons#BARREL RACING, #ZOETIS, Long Live the HorseComments Off on His Effort Can Do It: How a Senior Horse Qualified for the Nation’s Toughest Barrel Race

Excellent care and putting the horse’s needs first have contributed to His Effort Can Do It’s longevity and durability. At 18, he’s still a 1D barrel horse and will be running in the American Semi Finals this weekend. 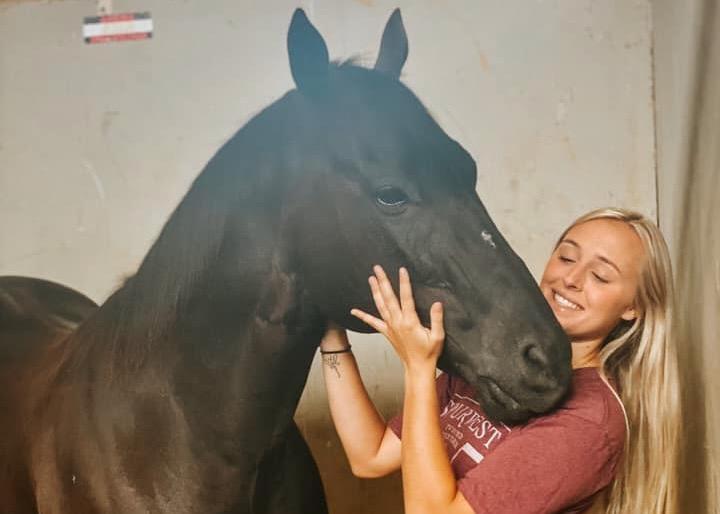 Abby Gray and His Effort Can Do It. Photo courtesy of Abby Gray.

For eight years, Abby Gray and her horse His Effort Can Do It, aka “Effort,” have been chasing a 1D win at a major barrel race. They have come close, but when there are hundreds of competitors to outrun, tiny mistakes cost too much time. Bobbles and stumbles have often placed them just a few thousandths of a second short of their goal. But at Brandon’s Barrel Bash & American Qualifier in Pensacola, Florida last month, Abby and Effort finally did it. They bested nearly 350 horse and rider teams to take the top spot. Now, just one month before his eighteenth birthday, Effort will be heading to the most highly anticipated barrel race of the year – the American Semi Finals. Here is how Abby has kept Ole Effort running at his best and how she plans prepare him for the race:

Effort was foaled on March 28th, 2004 in Georgia. He was bred by Robin Archer. His pedigree is packed with long-lived champion racehorses. Effort’s grandsire, Special Effort, became the only winner of the American Quarter Horse Association Triple Crown in 1981 when he won the Ruidoso Futurity, Rainbow Futurity and All American Futurity at Ruidoso Downs. Special Effort went on to sire over 1,800 registered Quarter Horse foals before his death at 27 years of age. Through his dam, She Can Do It All, Effort is also related to legends such as Moon Deck, Johnny Dial and the Thoroughbred stallion Round Table, who won 43 races and lived to be 33 years old.

Effort and Abby have been a team since he was 10 and she was 11. In that time, Abby has learned that Effort performs better when he makes fewer runs. Because she equally values the physical and mental health of her horses, Abby takes both into consideration when planning Effort’s races. She carefully selects which arenas to run him at and limits his schedule to two events per month or less. At home, their fitness routine alternates between long trotting and loping circles. She rides him about three or four times each week, but they never practice the barrel pattern. He knows the pattern so schooling it would be counterproductive. Abby says that staying away from barrels at home has been beneficial for Effort’s body and mind.

Abby has always kept Effort on a great feed regimen. He is on a senior feed with some supplements to provide a complete source of vitamins and minerals with additional support for joint, bone, immune, hoof, coat and gut health. She considers Effort to be any easy-keeper, but her program allows all her horses to thrive. “You have to give horses the opportunity to actually be horses,” says Abby. Applying that philosophy means that her horses are on pasture all day unless the weather is severe. They have access to grass and are fed some alfalfa hay. When they are on the road and have to be stalled, Abby takes her horses for walks and lets them graze as often as possible. She always puts their needs first.

Effort enjoying the pasture with his pals.

Effort’s longevity can be attributed good genetics, methodical exercise and balanced nutrition, but also excellent veterinary care. Abby says that regular vet visits and joint injections once per year have helped reduce inflammation and prevent injury. Abby pays close attention to how Effort feels under saddle. If he ever feels the slightest bit off, she will have him checked and adjusted by a chiropractor. He has also received alternative therapies such as acupuncture to keep him feeling his very best. Abby clearly is doing right by Effort as he is willing and able to give it his all every run.

Abby says that she is keeping Effort’s routine consistent in preparation for the American. They will run in the Semi Finals Long Go at the Cowtown Coliseum in Fort Worth, Texas on Friday, February 25th. Abby still is amazed by Effort’s impressive run in the qualifier. “We were up towards the end of the draw and I was extremely nervous after seeing so many fast times,” says Abby. “For a moment I doubted myself and wondered ‘what am I doing here?!’ I calmed my nerves by talking to Effort as I saddled up. I told him that I knew that he could do it… We just had to give it our all. Despite my doubts, I felt like he was really listening to me. I knew that we were going to lay down a good run. I could hear nothing but cheering as we ran out of the arena. I instantly started crying! I jumped off and my sister met me outside. She was trying to hug me, but I was too busy clinging to Effort’s neck and thanking God. It was my most memorable win and probably always will be!”

If Abby and Effort advance from the Semi Finals in Forth Worth to the American Rodeo at AT&T Stadium, they will have a shot at winning over $1 million. But no matter how Effort runs, he has already proven himself to be one of the best senior barrel horses in the country. Abby’s approach to horse husbandry also has proven to be very effective in keeping her horses healthy and happy. Her methods could be implemented in almost any barn to help keep young and old horses performing at their best.

You can watch Abby and Effort in the American Semi Finals Long Go on Friday, February 25th at https://www.ridepass.com/

Abby and Effort are being featured as part of Horse Nation’s partnership with Zoetis and in conjunction with their Long Live the Horse campaign. Talk to your vet to learn more about Zoetis’s full range of regenerative medicines and keeping your horse happy, healthy and performing for as long as possible.